The coronavirus pandemic shut down cinemas in many parts of the world for extended periods in 2020, with global box office falling 71 percent from a record of $42.5 billion to $12.4 billion and domestic revenue dropping 80 percent to $2.3 billion, according to Comscore.

That meant Hollywood studios’ profits in many cases dropped despite lower production and other expenses and cost cuts, including layoffs. Warner Bros. overtook Disney in The Hollywood Reporter‘s annual film unit profit table, but the latter changed its reporting structure, starting with the final quarter of 2020, amid an increased focus on streaming.

For the second year, the annual analysis includes an educative look at streaming giant Netflix, whose financials are not directly comparable to those of the studio units of entertainment conglomerates (for example, its revenue comes from subscribers that Hollywood giants typically record outside their studio units), but which increasingly competes for talent, content and awards.

Financial disclosures for studios remain limited and not easily comparable as Warner, Sony and ViacomCBS’ studio arms include TV production units, which others don’t have. THR crunched figures for the calendar years 2020 and 2019 to enable a comparison, even though Disney and Sony have fiscal years that don’t align with the calendar year. Nonetheless, the ranking gives a snapshot of the business of major studios at conglomerates at a challenging time for Hollywood. 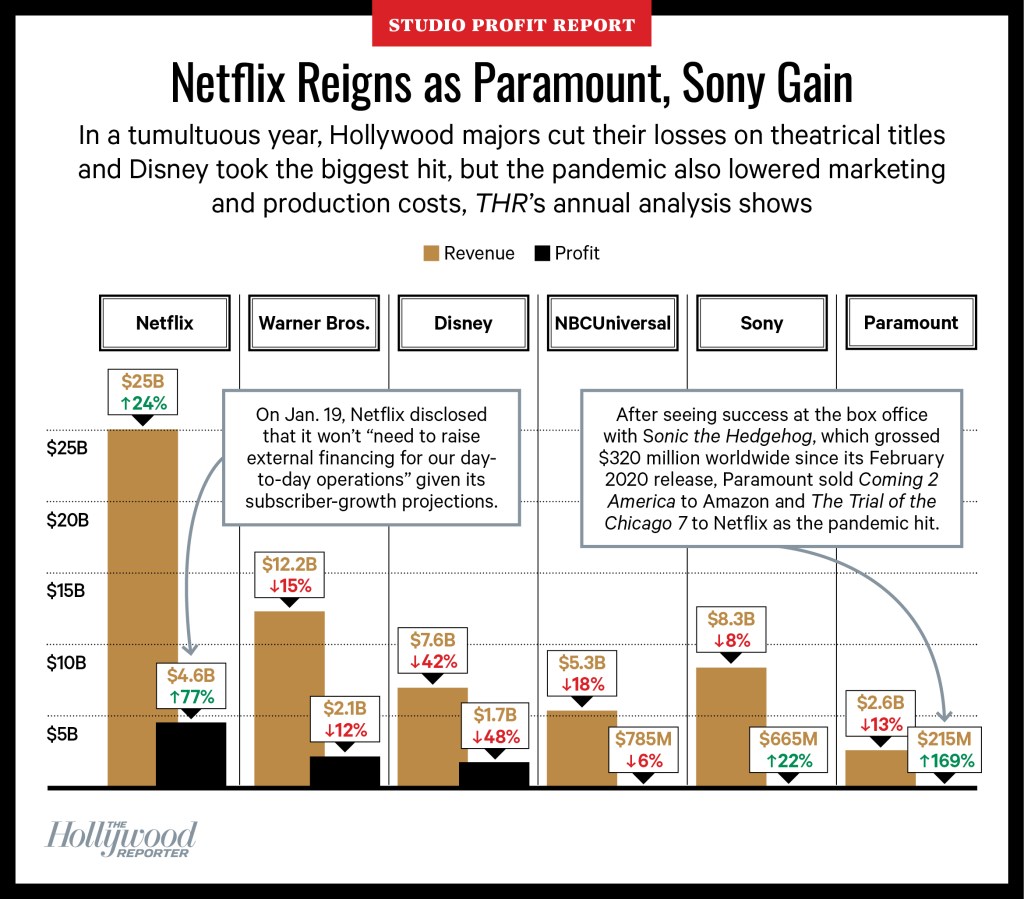 The streamer accelerated its growth in 2020 thanks to stay-at-home orders in many parts of the world, adding a record 36.6 million users and ending the year with 203.6 million global subscribers. Revenue rose sharply and its operating profit overtook all Hollywood giants’ studio units. In addition, Netflix swung to positive free cash flow for 2020 to the tune of $1.9 billion (after a 2019 loss of $3.3 billion) and forecast it would roughly break even for 2021, followed by free cash flow profits after that. With Hollywood pushing into streaming, Netflix is keeping up its programming spending, unveiling a huge film slate of 71 titles and noting that, as of January, it had 500 film or TV projects in postproduction or prepping to debut. During a Jan. 19 earnings call, co-CEO Ted Sarandos emphasized plans for the service to “expand well beyond a movie a week” to entice subscribers.

The studio overtook Disney in THR’s profit ranking despite a decline from record operating income in 2019 driven by the pandemic. Theater closures spurred a 76 percent box office hit to less than $1.1 billion. The TV production arm, the biggest part of Warners’ business, widened its revenue lead thanks to a small 3 percent dip to $6.2 billion. Video games and other revenue decreased 21 percent to $1.6 billion, but Warner Bros. Games, relying on catalog fare, posted record annual profit. Warners’ total revenue fell 15 percent, but its bottom-line drop came in less pronounced, with a 15.8 percent reduction in operating expenses, helped by lower production and marketing spending, to $10.1 billion. Warner, though, also reported fourth-quarter charges of 520 million “resulting from the continued shutdown of theaters during the pandemic and the hybrid distribution model for our 2021 film slate.” This year, all eyes will be on how that strategy for the movie slate — in which titles will debut day-and-date in theaters and on HBO Max — fares.

Studio profit was nearly cut in half amid COVID-19 cinema closures and a particularly difficult comparison with the unprecedented $11.1 billion global box office haul that Disney films brought home in 2019. As with all studios, the coronavirus pandemic played a key role. In the first quarter of 2020, for example, Disney reported lower studio profits and “an adverse impact from COVID-19 on the performance of Onward,” released domestically on March 6. The studio later sent Hamilton straight to Disney+. That was followed by Mulan, which went to Disney+ at a premium price in the U.S. and other markets (at $29.99 in the U.S. for early access), while theatrical releases in China and Russia were muted for the title. One caveat: the October-December period saw Disney change its financial reporting amid reorganizations for the streaming age, making comparisons with 2019 difficult. Analysts say the new disclosure on “content sales/licensing and other” is the closest equivalent to the former studio unit, but financials are not directly comparable as the new category also includes TV SVOD sales. Disney reported a $188 million operating profit for that segment for the final quarter of 2020, down from $776 million in the year-ago period (which differs from the $948 million recorded for the 2019 period for the old studio unit).

The studio’s profit didn’t fall as much as expected given an 18 percent revenue drop fueled by a 71 percent box office blow. But COVID-19 also meant a 21 percent cut in operating expenses, thanks to a drop of 43 percent in advertising/marketing costs and a nearly 12 percent programming/production dip due to fewer releases. Universal did have theatrical success with February’s lower-budget The Invisible Man ($143 million). The Croods: A New Age, released in November on the way to $156 million in worldwide grosses to date, was another highlight. The studio’s home entertainment revenue decline slowed to 1.4 percent while content licensing grew 9.7 percent, helped by “increased sales of titles made available on demand,” such as Trolls World Tour. NBCUniversal CEO Jeff Shell said about that film’s premium VOD release that it “exceeded our expectations” and had “a significant positive impact” in the second quarter. Overall, Universal said its landmark premium VOD deal with exhibitors provided incremental revenue to the company and a lifeline to struggling theaters.

Like its peers, Sony felt pandemic pain at the box office, with revenue tumbling 64 percent to $504 million. And since its film unit includes TV channels, it also took a hit in advertising. Despite an overall revenue drop, the studio improved its film profit. How? Management cited lower marketing costs due to a depleted theatrical slate and the cost benefits of a decision to prune its portfolio of international TV channels the past couple of years to 65 at the end of 2020 from 76 a year earlier. Also helping were lower expenses thanks to production delays. And the studio unit boasted a 3 percent gain in home entertainment revenue and higher TV production licensing revenue. The studio’s TV hits last year included The Crown and The Boys. Sony even celebrated being the top studio at the domestic box office, powered by Bad Boys for Life, Hollywood’s biggest global earner of 2020 (the film has taken in around $430 million overall).

Last year, the first since the recombination of Viacom and CBS, saw the studio more than double its adjusted profit to a multiyear high after it returned to a slight gain in 2019. It cited “lower distribution and film production costs resulting from fewer theatrical releases” due to the pandemic. The studio recorded a 19 percent overall dip in expenses to $2.3 billion, which more than offset a revenue drop. With just a 6 percent decline, licensing remained the largest revenue generator for Paramount, with $1.6 billion, followed by home entertainment, which recorded a gain of 14 percent to $709 million, driven by “higher sales of catalog titles and titles from Miramax,” of which the company acquired control in the spring. But theatrical revenue declined 67 percent to just $180 million in 2020 as the studio delayed major titles or sold them to streamers after the first-quarter success of Sonic the Hedgehog, which has grossed $320 million worldwide.