More than 26 million people have thus far contracted COVID-19, but it’s an image of the Emmy Statuette with the SARS-CoV-2 virus that has prompted an intellectual property suit ahead of this year’s Emmy Awards.  On Friday the National Academy of Television Arts & Sciences filed a complaint against Multimedia System Design, doing business as Crowdsource the Truth, for disseminating said image to promote the “Crony Awards.”

The suit targets Crowdsource the Truth, described as a platform for “alternative information,” i.e. conspiracy theories.

“On or about June 12, 2020, two weeks before the Daytime Emmy Awards Show aired on CBS, Defendant posted its own award show—entitled ‘Crony Awards’—on YouTube and other platforms,” continues the complaint. “The show honored countries that refused to lock down and/or minimized the COVID-19 pandemic.”

The Television Academy reports that the following image was used to market the show: 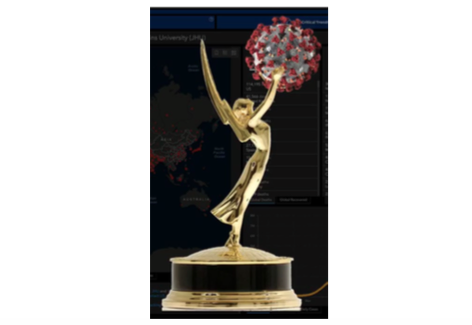 “On Tuesday, July 28, 2020, the Infringing Image was reported to the Television Academies as a ‘gross’ trademark violation, citing it as ‘beyond disrespectful,’ and made reference to a family member that had recently passed away due to COVID-19,” states the complaint.

Jason Goodman, said to be the principle behind Crowdsource the Truth,  objected to a DMCA takedown by remarking that the image was “parody.”

The Television Academy disputes it’s parody, and the fight has hit social media where @csthetruth has accused NATAS president Adam Sharp of being a “political operative” using the DMCA takedown process to stifle “competition from real news.”

According to the complaint, the defendant is also responsible for YouTube videos alleging Sharp’s career is the product of “nepotism, corruption, and CIA-led propaganda campaigns.”

Here’s the full complaint with causes of action of copyright infringement, trademark dilution, unfair competition, and libel. The Television Academy seeks an order preventing defendant from using the image.