National broadcast TV networks don’t go on the market very often. So when the news broke that ViacomCBS and WarnerMedia were shopping a majority stake in The CW network, and that local TV giant Nexstar was the lead bidder, eyebrows were instantly raised. The deal, assuming it goes through (one source familiar with the talks says that while they were advanced, they could fall apart), would reshape the network TV landscape at a time when the very idea of what network TV should be is in question.

For ViacomCBS and WarnerMedia, the deal would give them much-needed cash that they could use to invest in their owned streaming services Paramount+ and HBO Max (both companies have been divesting “noncore” assets over the past few years for that reason), and multiple sources tell The Hollywood Reporter that any deal is likely to include a programming agreement that would see a Nexstar-controlled CW committed to buy programming from their respective TV studios.

The CW Hires Perhaps Its Most Important Executive

For Nexstar, it would be the acquisition that gives the Texas-based station owner truly national scale and reach, as well as a digital building block to work from. Nexstar has been quietly aggressive in the M&A space over the past few years. Its defining deal up until now was its 2019 acquisition of Tribune Media, which included most of Tribune’s stations (it had to divest some for regulatory purposes) as well as the cable channel WGN America — which it since has rebranded as a cable news channel called NewsNation — and a 31 percent stake in Food Network. (If WGN America is an indicator of what to expect post-acquisition, pricey scripted originals would be traded in for low-cost syndicated repeats and Canadian imports, which The CW has used to fill out its schedule.)

Nexstar subsequently struck a deal with Fox to sell its stations in Seattle and Milwaukee and acquire Fox’s Charlotte, North Carolina, stations. Then, in 2021, Nexstar nabbed political news outlet The Hill, with plans to share resources with NewsNation.

Sources say a notable piece of a CW deal also would be local. Nexstar already is a critical station owner for the Mark Pedowitz-run The CW, owning the network’s New York, Los Angeles, Dallas and Houston affiliates, among others. The CW has eight owned-and-operated TV stations of its own, including stations in critical swing state markets, like Detroit, Michigan; Tampa, Florida; Atlanta, Georgia; and Philadelphia and Pittsburgh, Pennsylvania, as well as major markets like Seattle, Washington and the San Francisco Bay Area. For a company that long has leaned on political advertising, acquiring those stations could mean election-year advertising bounties.

While Nexstar is right at the FCC’s ownership cap of 39 percent of U.S. households, several CW stations are in markets where Nexstar already owns one station (it can own two, as long as they both aren’t among the top four highest-rated), and the company could choose to divest other stations in less lucrative markets in exchange for stations in more lucrative battleground states.

Nexstar CEO Perry Sook, speaking to analysts in the company’s most recent quarterly earnings call, said that he didn’t want to be “irrationally exuberant” but predicted that 2022 midterm political ad revenue would be “a lot closer to [the record-breaking] 2020 than maybe most folks are thinking.”

And in an investor presentation Jan. 12, the company said that political advertising driven by the “polarized political environment” is a “”near and long-term organic growth driver” for the company.

Estimating that The CW could be valued at about $1 billion, Wells Fargo analyst Steven Cahall wrote in a research note Jan. 7 that “we think [Nexstar] has been signaling a more expansive M&A strategy, with The CW being a very logical deployment of strategic capital.”

“Nexstar will continue to use its platform to make accretive acquisitions in its core business or new, complementary businesses where it can drive/protect revenue and generate synergies given its scale and strategic alignment,” the company wrote in its investor presentation, adding that “large scale M&A has historically created significant value.”

But for The CW, it also raises serious questions and concerns about the future of its programming lineup and strategy as well as its digital ambitions. Even if Nexstar wants to have a broadcast network with entertainment programming, there is no guarantee that it ends up pursuing the same year-round originals programming strategy Pedowitz has crafted over the past few years.

So even if a Nexstar-controlled CW were obligated to buy programming from Warners and CBS Studios, there is no obvious reason that it couldn’t change the programming strategy and simply lean on those studios to develop a new content pipeline. As broadcast’s longest-tenured network topper, Pedowitz has overseen The CW for 10 of its 15 years. He transformed the former UPN and WB Network from its female-focused demo by ushering in a roster of DC Comics-based fare from super-producer Greg Berlanti that helped bring men to its 18-34 demo. While The CW originally was designed to feature a 50-50 programming split between CBS and Warners — hence its name — the latter produces 13 of its current 20 scripted series, like The Flash and Riverdale. Industry observers were surprised that Warners, too, was willing to divest from the network after profits from programming sank with the demise of The CW’s $1 billion Netflix output deal and near erasure of foreign sales as streamers keep originals in house.

“We think [Nexstar] is looking to balance returning [free cash flow] to shareholders while also pivoting the company gradually away from dependence on Big 4 retrans cash flows via digital, political, and national networks like NewsNation and now potentially The CW (which, importantly, gets the majority of revenues from advertising),” Cahall wrote. “Within this strategy is a greater focus on content creation, and The CW is likely an intended foothold into content that also leverages existing studio partnerships.”

And The CW’s digital platforms — including CW Seed, the CW app and CWTV.com — could play a role in that, as the company looks to grow digital ad revenue. Ironically, Pedowitz’s digital push is said to have “pissed off” those same affiliates who now want to cash in on his success.

“Digital advertising surpassed all of television advertising now in terms of total dollars, … so I think you’ll continue to see, as Tom said, we’ll build on a content-first strategy, kind of build the broadest base of content and distribution to allow us to compete for the largest amount of dollars,” Sook said on the call. “As my dad used to say, it helps to hunt where the ducks are.”

As for what happens next, industry insiders expect The CW to make its annual pilot pickups, though volume is expected to be conservative thanks in large part to the pandemic and rising per-episode costs. Moves to HBO Max or Paramount+ for some current originals or pilots also could be in the cards as it is unlikely that Nexstar will be willing to continue to operate the network at a loss. (The CW, since its launch in 2006, has never been profitable as a network; Warners and CBS Studios profited only from streaming and foreign sales for their programming.)

“Nexstar won’t run it the same way,” worries one veteran agency source of the network that launched the careers of J.J. Abrams, Berlanti and Ryan Murphy, among scores of others.

And if Nexstar does take a majority stake in The CW, one likely change is the addition of national news programming to the network’s lineup. (The CW historically turns the 10 p.m. hour over to local affiliate newscasts.) A source at NewsNation says that after news of the deal leaked, some executives were “salivating” at the prospect of programming news hours on the network. One could, for example, see a Sunday public affairs show similar to NBC’s Meet the Press or CBS’ Face the Nation, perhaps with branding from The Hill. And that programming would benefit from political and issues advertising, feeding the beat Nexstar knows well. 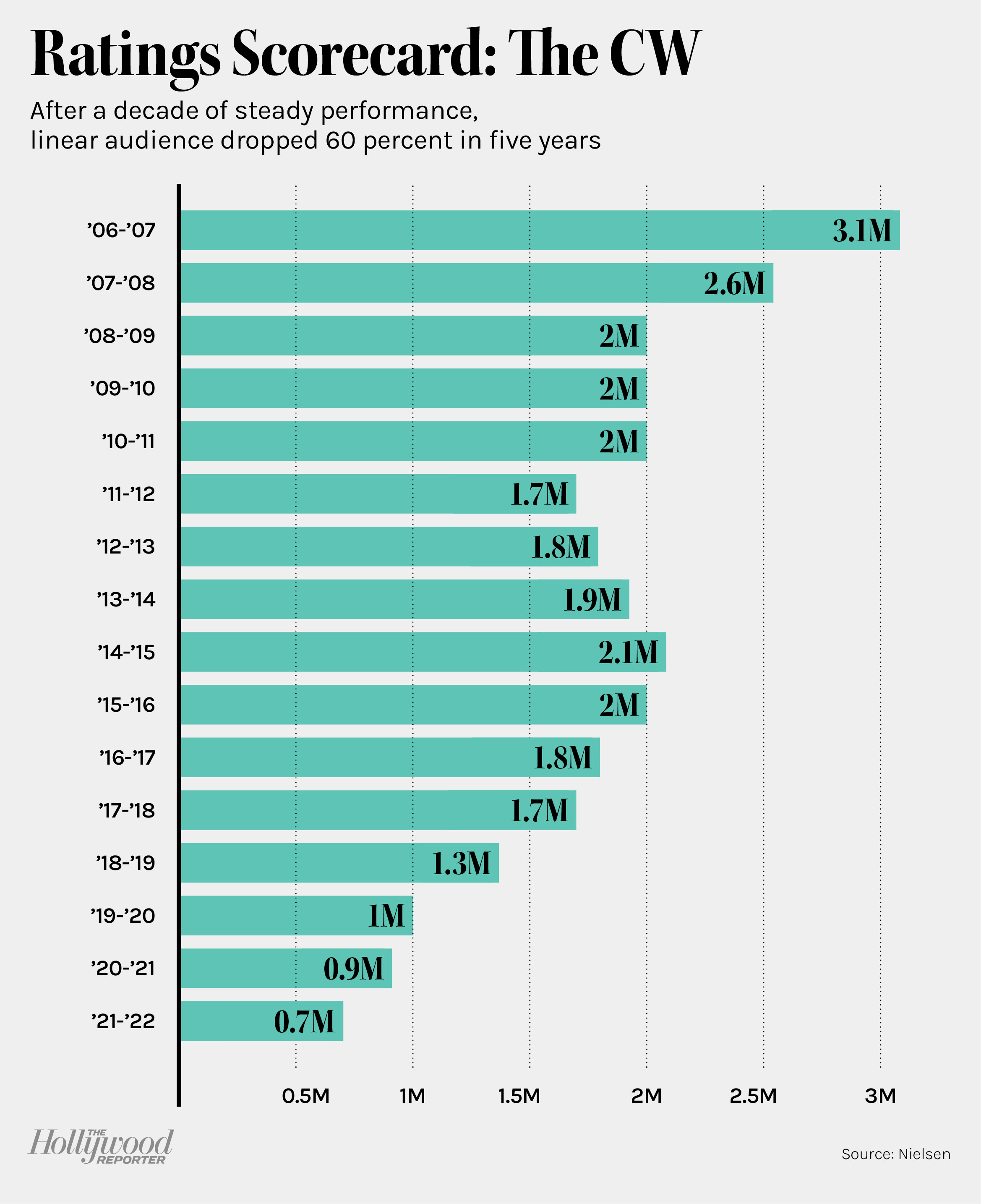 A version of this story first appeared in the Jan. 12 issue of The Hollywood Reporter magazine. Click here to subscribe.