In his sun-soaked Toronto office, Dennis Berardi, CEO of local VFX powerhouse Mr. X, is visibly pleased with the presence his company will have at the Toronto International Film Festival this year. As he should be, since his company played a key role in the effects work behind two of TIFF’s most high-profile titles: Guillermo del Toro’s sci-fi fable The Shape of Water and Aaron Sorkin’s buzzy look at an underground Hollywood poker game, Molly’s Game.

In 2014, Technicolor acquired Mr. X and paired the VFX house with Motion Picture Company, which has a global reach with offices around the world, including in Vancouver, London, L.A. and Shanghai. Mr. X, which currently employs roughly 400 people, is Technicolor’s VFX brand for work on such TV series as FX’s The Strain, Marvel’s Inhumans and History’s Vikings, as well as genre features and international movie co-productions, while MPC handles VFX work on higher-profile Hollywood tentpoles including Blade Runner 2049 and Kingsman: The Golden Circle.

Berardi, 48, who lives in Toronto with his wife and two sons, got into the VFX business in the early 1990s, working closely with Imax and the National Film Board of Canada to launch early digital imaging systems for both live-action and animated movies, making him a specialist in computer animation. While running the visual effects department at Command Post Toybox, he worked on such projects as Tarsem Singh’s The Cell and David Fincher’s Fight Club.

Berardi talked with THR about the challenges of the VFX and animation sectors, how he handles clients demanding increasing visual wizardry as timelines shrink and why he’s happy to work with uncompromising filmmakers.

You’ve worked with Guillermo del Toro on six movies — the latest being The Shape of Water — and four seasons of The Strain. What’s he like?

It’s hard work. He’s a hard guy to work for. He’s a master artist. He’s a great sketch artist and drawer. He understands film history like no other. He has a photographic memory. And his direction is at times very specific, and he’ll challenge you to pitch to him. And he’s a hard audience to pitch to. He’s so astute visually. So you’d better have backup. He wants to know foundationally what the premise is, logically how it will evolve across the film, how much it will cost and if it’s doable. And that’s after his initial reaction aesthetically. He has very good taste. And you can’t put something in front of him that doesn’t have nice composition; the color palette must work. If it doesn’t work for the film, he’ll shoot it down, unapologetically. He’ll say, “That’s a miss.” On a number of occasions, he’s told me, “Don’t ever show me that again. I’ve seen enough already.” But we’ve learned together. He’s challenged us, and I’ve challenged him on occasion. 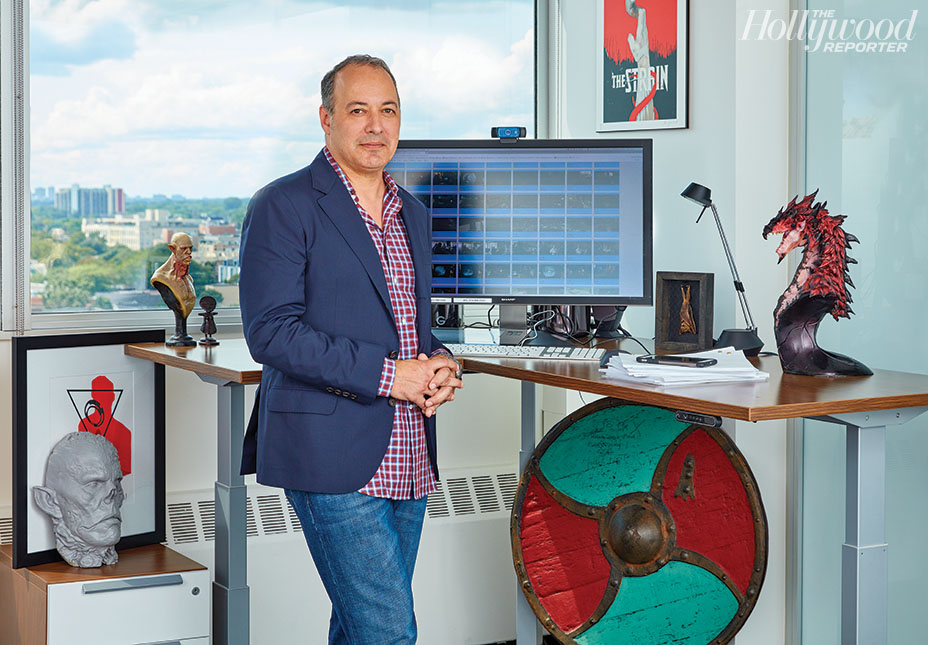 Del Toro also has embraced Toronto, doing virtually all of his work here. That’s great for Mr. X and the city.

He can work anywhere in the world. And his standards are as high as they get, whether he’s working on set, working on a prop, deciding on a costume for an actor or a visual effect. And we’ve been able, as a community of artists and technicians and filmmakers in Toronto, to rise to the challenge and help him deliver his vision, without compromise.

When Technicolor acquired Mr. X three years ago, that appeared to signal you wanted to grow. Were your ambitions to go global?

I made a choice five years ago to try to take the company global. The whole industry was shifting. We saw middle-budget feature films start to evaporate. Hollywood was either making big tentpole, franchise action movies, or the independents were making much smaller films. That gap, that middle-budget feature, was replaced quite nicely with the emergence of high-concept television series and now the OTT services with Netflix, Amazon and Hulu. The amount of investment they’re making is quite amazing. It’s a golden age of high-concept television. And as visual storytellers at Mr. X, we’re embracing that.

What’s the division of labor between Mr. X and MPC?

MPC is a much larger company than us. They focus on the very large feature films — the first Guardians of the Galaxy movie, they won an Oscar for The Jungle Book — and they have thousands of artists and technicians and are really focused on that high-end, big-volume world. That’s not our world, though we work together. Our focus is art house features, international co-productions, films that have a $15 million budget, but the visual standard has to be really high. This mid- and low-budget world is more creative, we do have a lot more input, and I get to say no sometimes to independent filmmakers. MPC is really in the yes business, where every indulgence is afforded to the filmmaker and they go for it, and some great work is being done. That’s not our business.

Ontario has digital tax credits for VFX and animation, yet incentives are available globally. So is it quality and creativity that sells the province more than the free cash?

The tax credits put us in the running against other global jurisdictions. But to stay and for our clients to come back, we have to deliver quality. And in today’s marketplace, we’re competing with at least 10 other jurisdictions in the U.S., not the least of which is Georgia, a couple more in Canada, the U.K., Australia, New Zealand and eastern Europe, and that’s not even mentioning India and China, which are emerging. So quality is king.

The stuff that keeps me up at night these days is being able to make it through the gauntlet of today’s filmmaking landscape, where the standard of quality is so high, and the timelines are so short. That’s a rough go, where we’re trying to do work that is potentially award-winning — because that’s the expectation — and we have to do it on a fraction of the timeline. I know we can do it fully if we had double the time frame. But the challenge is a TV show we have to turn around in six to eight weeks, and a feature film is turned around in less than 20 weeks. Then you add the visual appetite that audiences expect, and producers and directors require, and that keeps me up at night, the ability to get it done on the timeline. I’m hoping that it doesn’t continue, this compressing of timelines, but I have a sense that it will. And if it does, we will continue to rise to the occasion.

SOHO VFX
As moviegoers flock to effects-driven tentpoles, Soho VFX is delivering digital magic with ever-increasing complexity for such blockbusters as Logan, Rise of the Planet of the Apes and Avengers: Age of Ultron. “We’ve added to our toolbox,” says Berj Bannayan, co-owner and visual eects supervisor at Soho. “We can do a movie now with creatures and explosions and fire and water as we dig deeper to get better and better at each individual eect.”

Spin VFX president and executive producer Neishaw Ali says her Toronto visual eects house is realistic about bids to Hollywood clients. “We tell them we will deliver the show, but this is how it will work. Because they want success as well,” says Ali, whose Toronto shop did 3D dolphins for Columbia Pictures’ The Shallows, chase scenes for Warner Bros.’ Suicide Squad and a raft of work for Syfy’s The Expanse.

EGGPLANT PICTURE & SOUND
Eggplant is a boutique post house providing VFX, animation, and video and audio services as part of Hollywood’s visual effects hub in Toronto. That includes the title sequence for DirecTV’s gritty crime drama Rogue, starring Thandie Newton. “We’re not a large facility, so we can cater quickly and eectively with projects that come through our door,” says Paul Moyer, Eggplant’s supervising producer. “Clients are getting savings from having a team who are skilled and highly creative.”

This story first appeared in The Hollywood Reporter’s Sept. 8 daily issue at the Toronto Film Festival.