Hopes were running relatively high on studio lots across Hollywood in June. A true box office recovery seemed within sight. Executives could feel some confidence about their fall releases after having to rearrange their entire calendars at the beginning of the pandemic in spring 2020 and then again during last winter’s surge of COVID-19 cases. But the sense of calm wasn’t to last.

The aggressive delta variant sparked a spike in COVID-19 cases in Los Angeles, some Southern states and now nationwide. Moviegoing comfort levels plummeted in a matter of weeks, according to polls conducted by the National Research Group, waylaying the recovery indefinitely. Overall comfort had been running at a pandemic-era record of 81 percent in early July before starting to fall-off noticeably day after day. As of Aug. 16, the comfort level stood at a worrisome 64 percent.

'Strange World' Box Office: Why the Disney Animated Pic Spun Out of Orbit

The response was swift as studios began to blink (again). Paramount announced at the end of July that it was taking the family film Clifford the Big Red Dog off the September calendar. Moms, followed by dads, are particularly nervous about taking their children to the multiplex because those under age 12 are not eligible to get vaccinated, polling shows. And all older females and males, who are a prized demo for fall awards fare, are anxious.

Sony was next, relocating sequel Venom: Let There Be Carnage, starring Tom Hardy, from Sept. 24 to Oct. 15, and then, on Aug. 16, selling off Hotel Transylvania 4: Transformania, which had been set to hit theaters Oct. 1, to Amazon in a windfall $100 million-plus deal. Regarding Venom, there’s buzz that it could move yet again. Either way, Sony has secured some breathing room.

Now, the often-asked question returns: How many other tentpole movies will relocate? Could the list include MGM and EON’s James Bond installment No Time to Die? (It is set to begin opening overseas toward the end of September before landing in the U.S. on Oct. 8.) The film is on the long list of 2020 event pics that have been delayed several times, a nightmare scenario. Sources say No Time to Die may not be able to push yet again at this point, as each restart costs many millions of dollars in marketing. Nor does MGM have a sister streaming service — at least not yet, pending regulatory approval of a deal to be acquired by Amazon.

Says one studio executive: “If I knew six weeks ago what I know now, I would have moved everything as far out as early next year.” A rival colleague adds that he would have said “no” to the chance of another major calendar migration six short weeks ago. “Now, it’s a maybe.”

The impact of the decline in comfort levels throughout July and into August was almost immediate in terms of diminished box office grosses, which never had reached pre-pandemic levels in the first place. Put another way, the casual moviegoer has yet to make a permanent return to the multiplex.

“In traditional times, once a release date is ‘locked,’ then everything else keys off of that, and so studios would only move a film under the most dire or unimaginable scenarios lest the prospects for a solid run in theaters be derailed,” says box office analyst Paul Dergarabedian of Comscore.

Disney and Marvel’s Black Widow debuted to $80.4 million domestically over the July 9-11 weekend, a pandemic-era record. Fellow Disney event pic Jungle Cruise opened to $35 million at the end of last month, followed a week later in early August by The Suicide Squad with just $26.2 million.

All three films were made available in the home immediately, a controversial release model employed by Disney and, to a greater degree, by Warner Bros. because of the pandemic and as both studios try to help grow their sister streaming services. Black Widow and Jungle Cruise could be viewed day-and-date in cinemas on Disney+ Premier Access for an additional $30. Warners’ entire 2021 slate is launching simultaneously on HBO Max, including The Suicide Squad, at no extra charge. (Warners titles have fallen more steeply than Disney’s, with Suicide Squad falling a huge 72 percent in its second weekend, the worst drop in recent memory for a DC superhero title.)

Both companies have made hundreds of talent deals trying to appease talent who would normally receive a piece of the box office backend. Jason Kilar, head of WarnerMedia, has acknowledged publicly that the conglomerate — which AT&T hopes to sell to Discovery — has paid at least $200 million to stars and filmmakers whose films went to HBO Max.

Walt Disney Co. CEO Bob Chapek also weighed in on the topic of hybrid releases during an Aug. 12 earnings call. He said “hundreds of deals” have been struck. In a recent lawsuit, however, Black Widow actress Scarlett Johansson alleged that Disney breached her contract by sending the superhero pic to Disney+ Premier Access and didn’t adequately respond to attempts to negotiate.

Warners says it intends to end day-and-date releases in 2022, and will instead abide by a 45-day exclusive window.

Disney committed to giving both Free Guy, which opened in mid-August, and Marvel’s Shang-Chi: The Legend of the Ten Rings, a 45-day exclusive theatrical release, although during an Aug. 12 earnings call, CEO Bob Chapek hinted that the delta variant clouds the landscape for fall releases such as Marvel’s Eternals. (He didn’t mention Eternals by name.) “We’ve said from the very beginning that we value flexibility in being able to make as many last-minute calls as we can, given what we see in the marketplace,” Chapek said. “Nothing is set in stone.”

The far-better-than-expected $28.4 million domestic opening of Free Guy over the Aug. 13-15 weekend did provide a huge boost for stressed-out executives. Many analysts note that an exclusive release on the big screen helped. Males under age 35 — a demo largely undeterred by delta — fueled Free Guy, meaning that movies relying on this group could still perform. (That’s good news for Venom: Let There Be Carnage, for example.)

“We’re at a stage in this long recovery period where I think studios are less intent on big sweeping changes to the release calendar and more focused on short-term adaptations to the market,” says Shawn Robbins of Boxoffice Pro.

“Not only is Free Guy representative of the kind of high-quality movie people are in the mood for and willing to see in cinemas right now, it again showcases demand for that theatrical experience and how important exclusive windows are for the industry’s ability to produce a genuine hit movie with a life cycle that doesn’t burn bright and die young,” Robbins continued. “Nothing is assured in the world we live in right now, and distribution strategies will probably be in flux for a little while, but Free Guy‘s performance so far offers reason for cautious optimism in several of this fall’s planned tentpole releases geared toward similar demographics.”

Overseas remains a hurdle, however, for a studio tentpole dependent on reaping most of its money from the foreign box office, particularly with China presently off-limits to Hollywood titles. Beijing film regulators’ usual blackout on foreign film releases during the peak summer moviegoing period has been stricter and longer than usual in deference to this year’s politically high-profile 100th anniversary of the founding of the Chinese Communist Party.

Delta also is causing issues in the Middle Kingdom. Beijing’s aggressive “zero COVID” policy means that the broad swaths of the country’s services sector, including cinemas, are at risk of total shutdown the moment a nearby local infection is discovered. “The impact of the ongoing pandemic cannot be understated,” says Rance Pow, president of Artisan Gateway, who notes that nearly 3,500 cinemas recently have been closed in China as a precautionary measure related to delta variant spread.

Many other countries also are being impacted. Both France and Italy now require vaccine passports to attend indoor public spaces, including theaters, which has driven down attendance dramatically. Some major Australian states are in lockdown, while Japan, Korea and Mexico are all reporting record-high COVID-19 cases. And across the international marketplace, there are capacity restrictions. Adds one top film financier, “It’s in everyone’s best interest to move big movies, especially considering where international stands.” 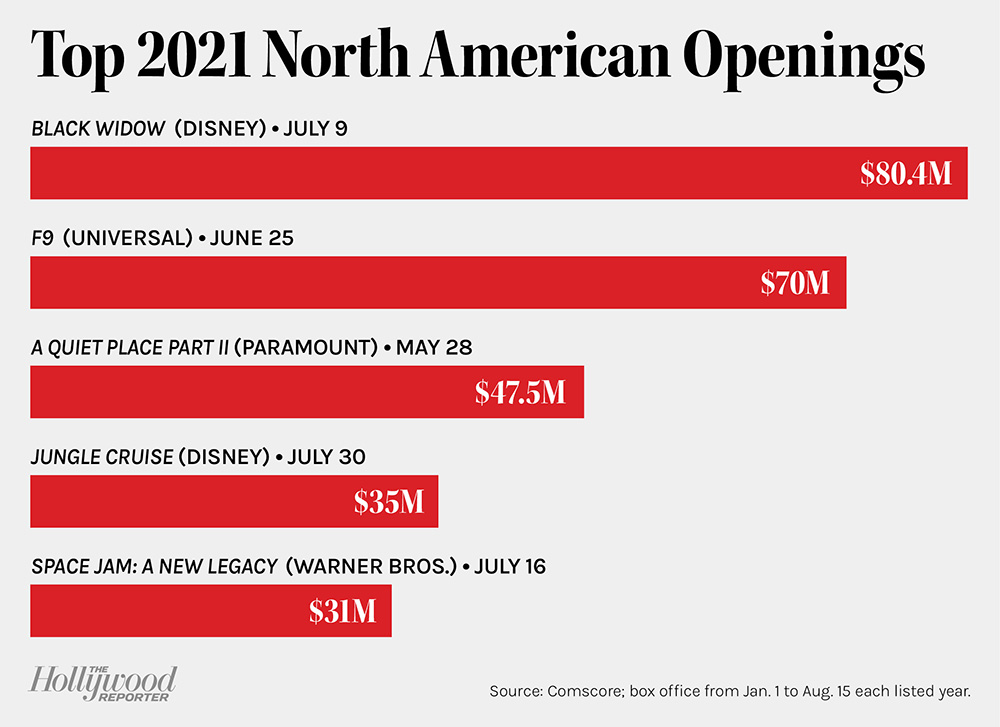 A version of this story first appeared in the Aug. 18 issue of The Hollywood Reporter magazine. Click here to subscribe.