In Cameron Crowe’s 1996 movie Jerry Maguire, Tom Cruise’s character opines on whether young athletes will ever turn pro: “It’s like popcorn in the pan. Some pop … some don’t.”

It’s a line Warner Bros. Motion Picture chairman Toby Emmerich and his boss, Warner Bros. Entertainment chairman-CEO Ann Sarnoff, can relate to. Aside from The Conjuring: The Devil Made Me Do It,  Godzilla vs. Kong and Dune — the latter two were produced by Legendary — nearly every 2021 release so far hasn’t lived up to already modest box office expectations, including In the Heights and The Suicide Squad, or adult-skewing dramas such as Cry Macho and The Many Saints of Newark.

'Gossip Girl' Creator and Stars Tease What's to Come in "Mean" Season 2 of the Reboot: "We Give Twitter What They Want"

But there was a major upside, according to Sarnoff and WarnerMedia chief Jason Kilar. All of the studio’s 2021 theatrical releases are being offered simultaneously on HBO Max in the U.S. Dubbed “Project Popcorn,” the controversial pandemic-era initiative — engineered by Kilar — was designed to pump up WarnerMedia’s new streaming service and allow Emmerich’s team to keep the pipeline flowing.

Many of the 2021 movies had been delayed from 2020, and included the sorts of smaller and midrange titles that the studio already was planning on moving away from after a number of misses in 2019.

“Project Popcorn” ends at the close of 2021 and the initiative only applies to the U.S.; overseas, Warners’ 2021 releases have opened exclusively in cinemas. The studio’s final two high-profile releases of this year are King Richard, starring Will Smith, and Matrix: Resurrections.

Kilar — who became Hollywood’s No. 1 enemy when the hybrid release strategy was first unveiled — says the experiment made the best of a bad situation, particularly because older adults are wary about returning to theaters. “A lot of other people were selling their movies to Netflix and Amazon,” Kilar said in a recent interview with The Hollywood Reporter. “We provided a service to movie theaters. And we worked our tails off to make sure that we were being thoughtful and generous with talent as well.”

HBO Max now has 69.4 million subs globally, including 45 million in the U.S. That’s up from 57 million worldwide and 38 million in the U.S. at the end of Sept. 30, 2020. The original movies were the biggest driver of the growth amid a lack of content on the series side because of COVID-19 production delays.

Others have a different viewpoint. “A lot of these movies would have made more money without HBO Max,” says one film financier. “There was more interest in building the streaming service than in serving their shareholders.”

It’s unclear as to what extent a day-and-date release on HBO Max cannibalizes box office revenue, just as it’s unclear how much piracy hurts.

Dune opened to $41 million domestically over the Oct. 22-24 weekend, the best showing of any “Project Popcorn” title. Even rivals were impressed (they say $50 million would have been a strong opening for a sci-fi epic in normal times).

Globally, Dune has earned north of $223 million to date. Legendary, which financed 80 percent of the big-budget tentpole, and Warners wasted no time in announcing plans for a sequel reuniting director Denis Villeneuve and star Timothée Chalamet. Dune 2 will open Oct. 20, 2023. (A sequel was Legendary’s call.)

As Discovery’s $43 billion bid to buy WarnerMedia looms — no one is sure who will stay and who will go on the film studio side — Emmerich continues to implement a major course correction that he began just before the COVID-19 crisis.

In pre-pandemic times, Warners released anywhere from 18 to 23 titles theatrically. The new edict: make 12 features for the big screen and 12 original movies for HBO Max, give or take, according to insiders. For example, there are nine movies dated so far for the big screen in 2022; that count could grow to 11, sources say.

Sarnoff says there will be no more day-and-date releases as of Jan. 1, 2022, and confirmed that it will be 45 days before a title hits HBO Max. “And, no great surprise, the ones we’re putting in theaters are the ones we think we’ll work. It’s not just about budget size, it’s also about genre and the behavioral patterns of people,” Sarnoff says. “I would love to put dramas and comedies on the biggest screen possible; it’s just right now they are not opening. Honestly, they weren’t opening pre-COVID either.” 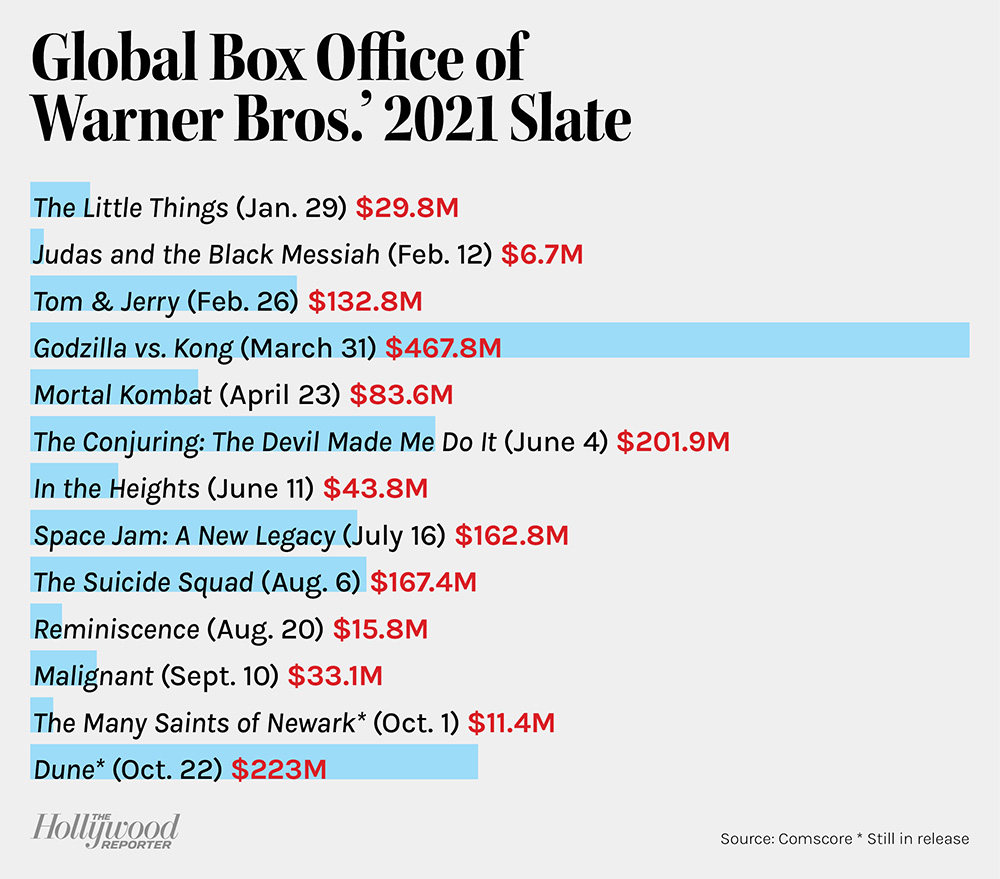 A version of this story appeared in the Oct. 27 issue of The Hollywood Reporter magazine. Click here to subscribe.