At first glance, it’s hard to tell Warren Littlefield, 65, ever had another job before becoming a TV producer. His sun-soaked Santa Monica office is filled with mementos from his two latest endeavors: blankets, snow globes and, yes, that’s Nikki Swango’s iconic fur coat from FX’s Fargo along with press packets, look books and a premiere invite for Hulu breakout The Handmaid’s Tale. But look closely: Hanging in the corner is a photocopy of the Seinfeld testing sheet — a small window into the two decades the New Jersey native spent at NBC, the last nine as president of entertainment.

Since leaving the network in 1998, Littlefield, who’s married with two adult children, has traded in Must See TV for Peak TV, teaming with platforms like FX and Hulu that were not yet in the scripted originals space when he was at NBC. It has paid off: Fargo and Handmaid’s Tale are nominated for a combined 29 Emmys — putting the four-person (including son Graham, who is vp development), 15-year-old Littlefield Co. on par with former rivals CBS and Fox.

Half my day is spent on development. I’m meeting with the writers, I’m out gathering IP. Another chunk of the day is spent on Handmaid’s Tale, year two. Right now, we’re putting that team together. I’m very hands-on and I try not to go after the usual suspects. We look at a lot of material, indie films and what we think is great quality TV from anywhere in the world.

The first season was made before the 2016 election. How will President Trump change the show in season two?

We’re not a news organization. We’re doing a dramatic thriller. Our themes might be amplified, but I don’t think you want to go, “They’re doing that Trump story.” 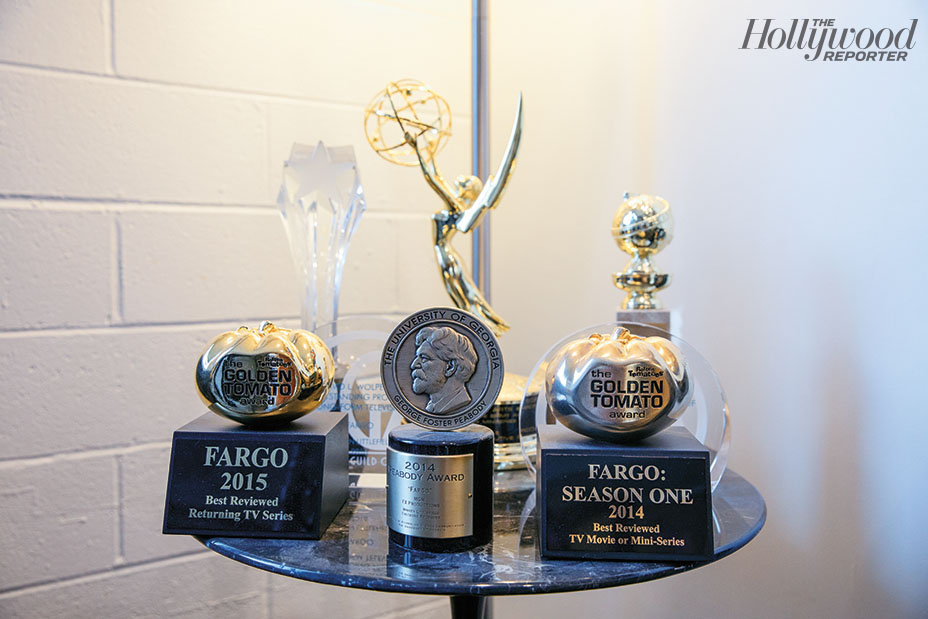 How different would the show have landed if Hillary Clinton had won?

There would not have been quite the off-the-entertainment-pages support for it. It gave us another level of relevancy. If Hillary had won, I’m not sure I would be watching MSNBC 90 minutes a night. I wouldn’t be quite so amped up about the world I live in. I wouldn’t be considering getting dual citizenship in Canada.

Do you feel a responsibility to tell stories that engage politically?

I don’t. There’s an appetite for entertainment and something that resonates in the world we’re living in. I spent a lot of time developing comedy in my NBC years. I just want to do something I’m excited about.

How did you convince Elisabeth Moss to do Handmaid’s Tale?

Lizzie and I had a two-hour phone call and I said, “You’re at a place in your career where you have choices, pretty spec­tacular choices that you’ve worked very hard to get to. This is a series, this is not an anthology, this is not a season, this is a series, but look, if you do it, I’ll do it, and I’ll be there at 3 o’clock in the morning. I won’t be absentee.” And Lizzie said, “I think we have to. I don’t think I could live with myself if I let this go and someone else makes it.”

Will this past season really be the end of Fargo?

It could be. [Series creator] Noah [Hawley] has a lot on his plate. He’d also have to fall in love with a story he wants to tell. There’s no question about FX or MGM wanting to do it. We’ll see.

You recently announced an adaptation of crime-thriller author Thomas Perry’s The Old Man with Samuel L. Jackson, his first television project. What else are you developing?

We met with Jim Cummings, who did an appearance in the third hour of Handmaid’s and who is a writer, producer and director. His short, Thunder Road, won the Sundance Grand Jury Prize. He had an idea for a show to star in with his writing partner PJ McCabe. It’s called Space. It examines astronauts who have an incredible experience on the moon, then come back to Earth and everything falls apart. It’s a nod to the future. We went into the marketplace with a fresh young voice, and three places bought it in the room. It’s in development at FX. It couldn’t be more different than what we do, but I would watch it. In the pilot, there will be a Trump 2024 bumper sticker. 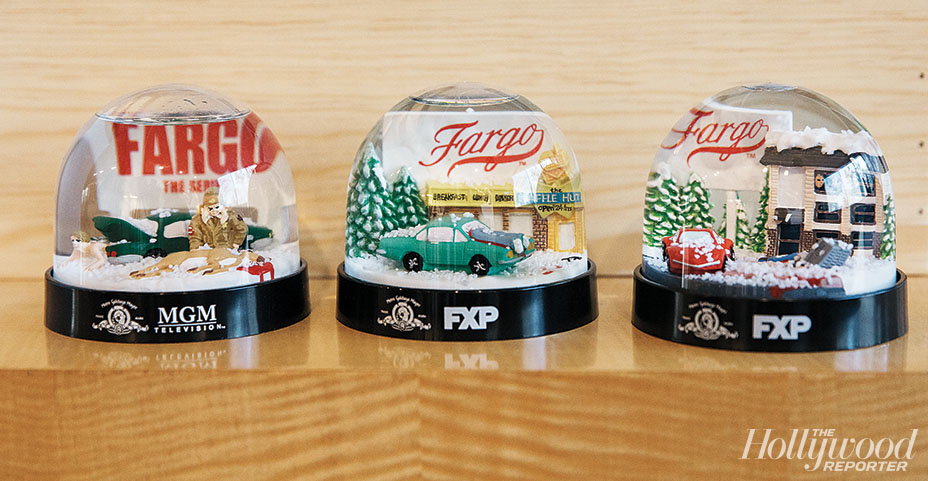 They’re fighting for how to stay big and therefore don’t have the ability to be as specific. What we’re able to do on The Handmaid’s Tale, there’s not a chance that could be a part of network TV. There’s a version of it, but it wouldn’t be good. I go to the networks [to watch] some news and live sports, but not for a lot else.

What advice would you give to network heads?

You have to define who you are. In the age of infinite choice, you must limit your choices. Then you need a programming strategy that your entire organization buys into. Then you execute that strategy in an overall game plan but also on a night-by-night basis. Taking the time to figure out your core basics is critical.

Looking back, which NBC show are you most proud of?

Seinfeld has got to be right up there. I don’t have a lot of NBC memories in my office, but I do keep and have always kept the original Seinfeld Chronicles test report nearby. It’s signed by Larry [David], Jerry and the entire cast. “Overall test results, weak. These are unlikable characters.” It’s a reminder that all indications were that there was nothing to go forward with. 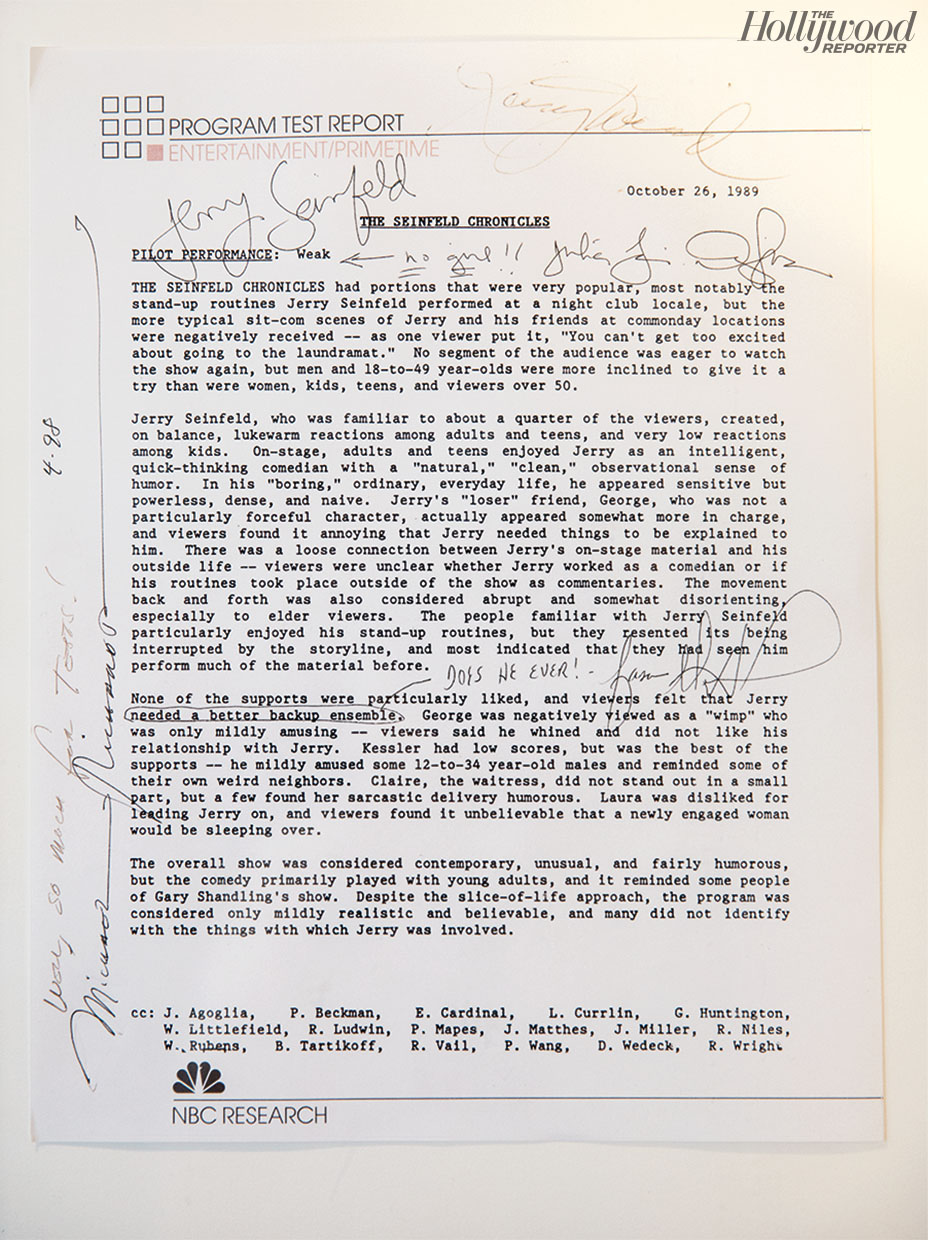 If you could go back and change one major decision, what would it be any why?

We did a John Falsey family drama called A Year in the Life. Sarah Jessica Parker was in it. It was a wonderful, complex family drama and we canceled it. The actor that played the father [Richard Kiley] grabbed his Emmy and he just looked down at us and said something about corporate myopia. I was like, “Fuck, we screwed this up.” I would like to think that we took all those decisions seriously, and I did, but sometimes you make mistakes because you can’t see it.

What was your toughest fight?

When we did Friends, we were in second position on Jennifer Aniston. We were going into production in the summer, and Warner Bros., my business affairs and legal said, “You don’t own Jennifer Aniston. Replace her.” I said, “No.” They said, “If her [CBS] show is picked up, then this is going to cost millions of dollars.” Warner Bros. made it very clear the money was not coming out of its pocket. I go, “You’re not going to come after me. We’re doing it. That [CBS] show will die. They’re not going to pick it up just to fuck us, and I’m not destroying the chemistry of this show.” 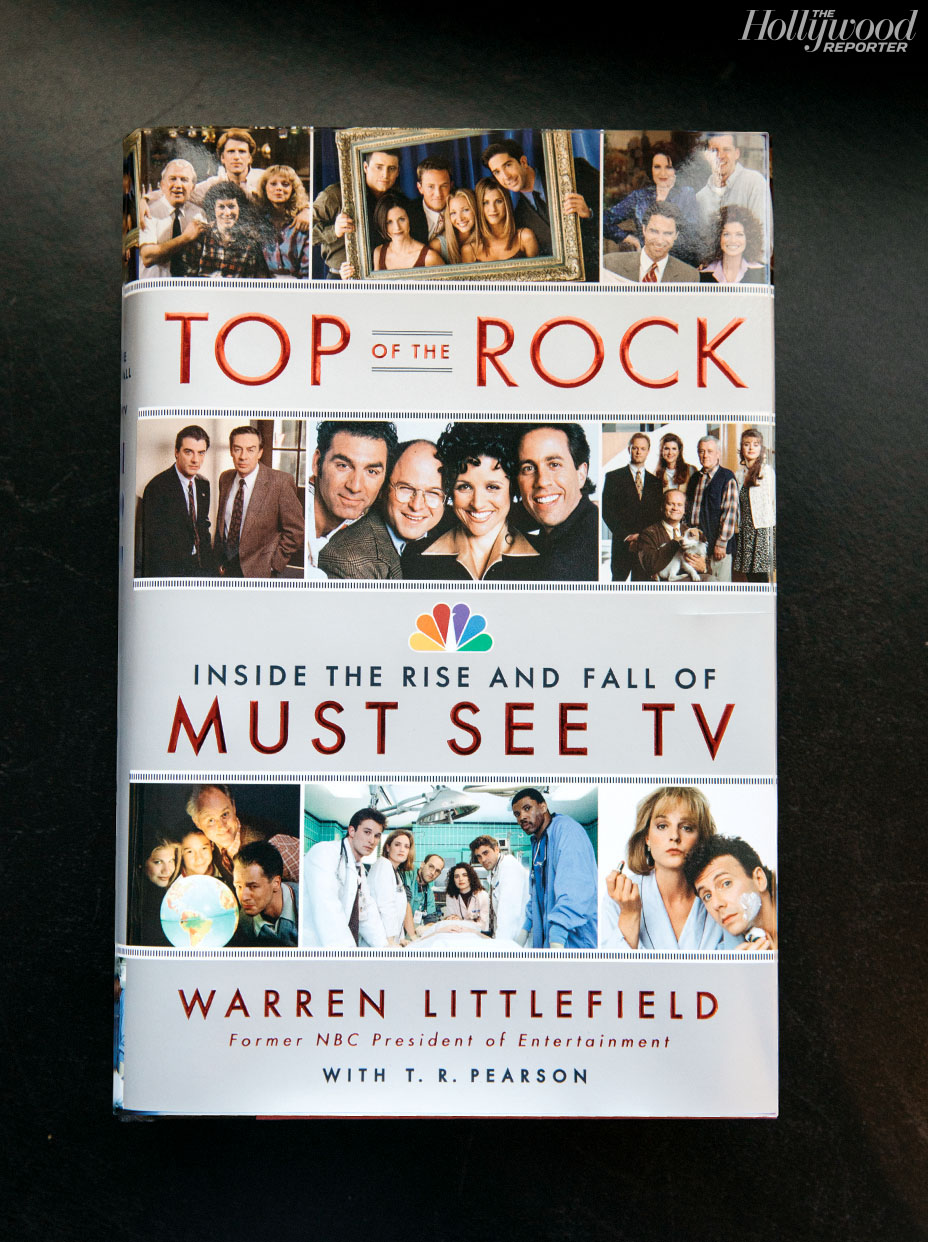 NBC Entertainment chairman Bob Greenblatt has talked of reviving the “Must See TV” slogan. Can it exist in the Peak TV era?

Jeff Zucker killed Must See TV with the help of Donald Trump (on The Apprentice). It took a while, but with Bob and [NBC president] Jen [Salke], they’ve done a very good job of recovering it. Maybe it resonates for a whole new audience.

Would you consider running a network again?

I don’t think so. There’s probably a statute of limitations. I loved it. I miss having the ability to say, “We’re making it.” Now, I have to ask somebody if they want to make it.