A traffic jam of writers clogged Universal City on Tuesday night, delaying by a half an hour the scheduled start of a Writers Guild Member’s meeting called to begin a strike authorization vote that continues at meetings Wednesday night in Beverly Hills and New York and online from Wednesday through Monday.

By the time the meeting began at about 7:30 p.m., it seemed likely that the 900 person capacity ballroom at the Sheraton Universal was mostly full. The meeting began to break up around 8:30 p.m., though some writers left earlier, presumably after casting their ballots.

A “Yes” vote is expected, and would give guild leadership the power to call a strike as soon as the existing contract expires May 1, which they’ve said they will do if no successor deal is in place by then.

“It was good. Seems like everyone is supportive of each other,” said one writer after leaving the meeting. “It was a very enthusiastic room,” said another. Patric Verrone, who was WGA president last time the guild went on strike in 2007-2008, was spotted leaving the meeting at 9 p.m.

Although no one was willing to speak substantively on the matters discussed, having been urged by guild leadership to stay mum, social media began to light up a bit later in the evening. “Just got back from the #WGA meeting,” John Hoberg (My Name is Earl) tweeted. “Based on the sustained standing ovation after asking for solidarity it’s clear this thing is for real.”

And guild president Howard Rodman posted on Facebook, “Just returned from the WGAW outreach meeting at the Universal Sheraton. It was as rousing — and moving — an evening of solidarity as I’ve experienced in a long while. It made me proud all over again to be a member of the WGAW, and a part of the community of writers.”

He added, “A strike authorization is not something any of us takes lightly, and it is of course — as we know deeply — a scary step. But it is a necessary one.”

And he then explained why the guild is holding the vote: “The fat-marker version: this authorization is the single best and largest piece of leverage we have to get writers what they need and deserve. Our negotiations are in recess until Tuesday, when the results of the vote are announced. Why? Because the companies don’t want to give us a penny they don’t have to. It’s that simple.”

“I hope you’ll join me in voting YES, to give our extraordinary negotiating committee the mandate they need to bring home a contract we can accept,” he concluded. 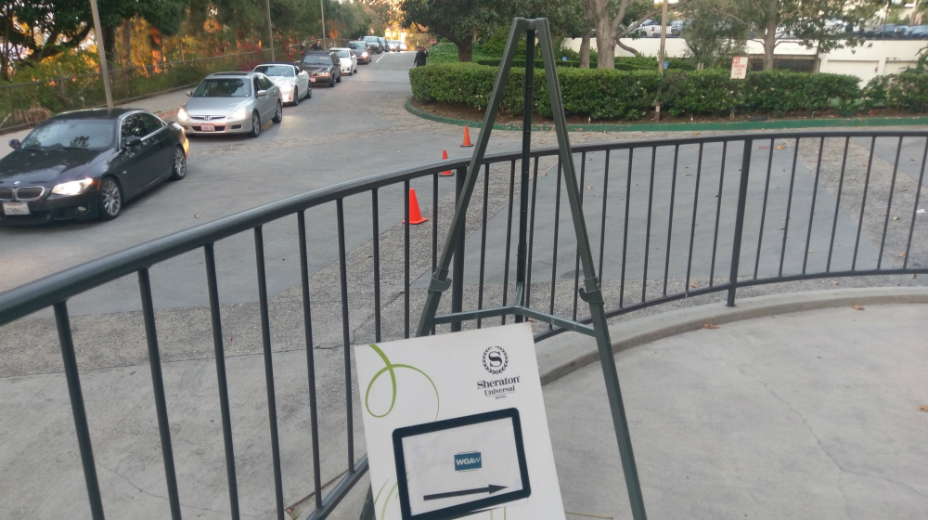 But achieving that deal will be difficult at best. As of about a week ago the parties were $350 million apart, with the writers looking for a $535 million deal and the studios more inclined to reach an agreement valued in the neighborhood of $180 million. That’s a ratio of 3 to 1.

It’s understood that since then there has been some movement on both sides, but observers find it difficult to see how a $350 million gap could have been bridged in such a short time — or indeed how it will be bridged prior to contract expiration, which comes just a week after talks resume.

That may be what the path to a strike looks like. The last Hollywood strike, the 2007-2008 writers’ walkout, cost the economy an estimated $2.1 billion to $2.5 billion. The impact this time would depend on a strike’s length, but a job action that persisted for any significant period of time would likely drive viewers away from broadcast and cable scripted fare to a range of alternatives such as sports, news, reality, internet video, apps and library content on digital services such as Netflix.

WGA Pension Plan Proposals a Matter of Dollars and Percents

a terrible, terrible thing,” Stephen Falk of ‘You’re the Worst’ tells THR as the minds behind ‘Fargo,’ ‘The Americans’ and ‘Better Call Saul’ also weigh in on the strike authorization vote.”]