Continue to The Hollywood Reporter SKIP AD
You will be redirected back to your article in seconds
Skip to main content
March 10, 2021 6:20am

A streaming service looking to stand out from the competition and attract subscribers has one clear path: offer day-and-date movies.

That path, taken by WarnerMedia’s HBO Max, has caused a backlash within Hollywood from filmmakers and theater chains. Yet it may be what the public is looking for. New films drive purchase consideration for potential subscribers, a pair of Hollywood Reporter/Morning Consult polls finds.

In one survey of 2,200 people conducted Feb. 25-28, 90 percent of respondents who subscribe to HBO Max said they would be more likely to purchase a subscription to a streaming service if it included newly released films the same day they are in theaters for no extra cost. Meanwhile, 64 percent of people who are not HBO Max subscribers said the same.

At the end of 2020, WarnerMedia announced that it would make all of its films — including Wonder Woman 1984 and Judas and the Black Messiah — available on HBO Max for the first 30 days that they were also available in theaters. The streamer ended the year with twice as many activated users as it had at the start of October.

So far, ViacomCBS has not indicated that it will make its films available day-and-date on Paramount+. Instead, it has said that some new releases will stream on the service 30 to 45 days after they appear in theaters. 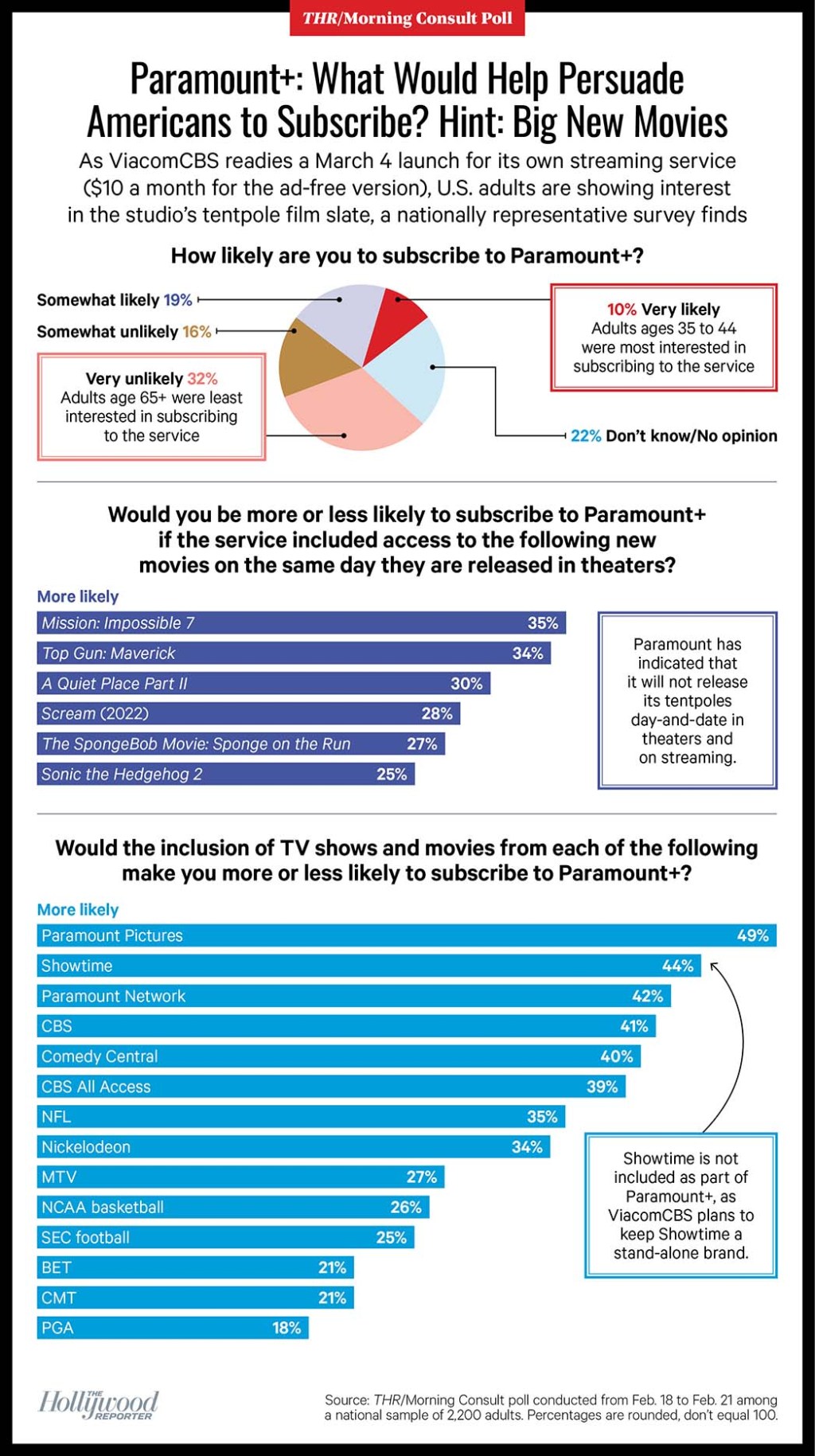 The mid-February survey also found that Americans are willing to pay slightly more for new releases on a streaming service. Respondents said they would pay between $13 and $17 per month for a streamer that included day-and-date movies. They also said they would pay an additional fee of between $9 and $17 for day-and-date movies. Disney has experimented with offering new releases Mulan and Raya and the Last Dragon on Disney+ for a significantly higher one-time fee of $30.

It stands to reason that high-profile film franchises would be a draw for streaming subscribers. It often takes longer for direct-to-consumer services to build up their reputation for offering original programming. Netflix, for instance, spent years offering third-party programming before it began to invest in originals in 2013 with shows like House of Cards.