2017 promises to be a year of dramatic import for the Hollywood talent agency ecosystem, one that could define the next decade. Long gone are the days when agencies could be judged solely according to lists of clients lost or stolen or, for that matter, tallies of agents who simply switched teams. Ever since the representation wonderland opened its doors to private equity money (first back in 2005 with Rizvi Traverse’s investment in ICM, then in 2010 with TPG Capital and CAA and Silver Lake’s 2012 purchase of 31 percent of WME), vocabulary about the business, evaluations of company performance and projections into the future have been in flux and in play.

It’s a much more multifaceted world now, with outside money being put to work as part of an acknowledgment — by the larger agencies, at least — that real growth no longer can be achieved ia the old system. With fewer movies being made and with big TV backends dwindling — courtesy of Netflix and other new platforms — client commissions are hardly viewed as the sole avenue to success. CAA Sports, for example, probably will make 2017 its third year in a row as the agency’s top dog in terms of revenue, and player representation makes up only a quarter of the division’s receipts. But an even more vivid example of this transformation is that WME-IMG now brings in roughly 75 percent of its revenue from outside traditional client services. That’s not just a paradigm shift, it’s a striking reminder that for some, the game has moved onto a much larger playing field.

When discussing private equity’s role in the agency business, the greatest possible oversimplification (and the widest center of attention) has had less to do with the investments themselves than with exit strategies or those private equity players. Granted, when WME bought sports and fashion player IMG for $2.4 billion in 2013 — and, this summer, added the UFC mixed martial arts league for $4 billion — there were several rounds of jaw-dropping over the price tags. Nevertheless, conversations typically turn away from mere dollars and to the immortal question, “When will the agents take a bite out of Wall Street?”

Thus the first and perhaps most obvious query regarding 2017 is, will WME-IMG or CAA file for an IPO? In CAA’s case, the answer is almost certainly no. TPG, which owns 53 percent of the agency, behaves as if it is in no rush; its massive wealth — capital under management of $75 billion — allows it to have more runway and more patience than most other private equity firms (it hung on to J.Crew for 12 years). It is moving forward aggressively with more deals from Evolution Media, the investment arm it shares with CAA. To date, Evolution has made roughly two dozen investments for a total of $300 million. That’s a little grain of sand on a big beach, so we may as well believe the principals involved when they say they’re “just getting started.” While an IPO may be further down the road, that’s not to say that if TPG should one day get the right offer it will spurn the suitor. For TPG, life always will be about return-on-investment. The firm has received overtures from interested parties in China seeking to buy CAA, and though no serious meetings have taken place, TPG and CAA have explored the notion of various possible partnerships with Chinese investors.

A year ago, most observers would have thought that the fourth quarter of 2016, or the first quarter of ’17, would be the moment when WME-IMG and Silver Lake would file for an IPO. But that was before the UFC purchase. It probably will take much of the next year, if not longer, for the books on UFC to be fully analyzed, dressed up and absorbed into the larger WME-IMG narrative; thus, we’ll likely have to wait a while for that iconic shot of co-CEOs Ari Emanuel and Patrick Whitesell ringing the morning bell on the stock exchange.

The powers that be at WME-IMG already have acknowledged this to some degree. Three years ago, when they did contracts with key agents, they gave them the option of receiving ownership in the company in exchange for less bonus money. An IPO was positioned as a vehicle that would make such a sacrifice beyond worthwhile. Now that such a huge potential payday has been pushed back, the agency is said to be enabling agents to take some of that money off the table — which many agents are doing to the tune of 15 percent to 20 percent. And while that money will be paid out over the next three years, agents do not have to stay at the agency to receive it.

Obviously, WME-IMG believes the growth potential of UFC is worth delaying an IPO. It is now a buyer and seller. One great benefit about buying a company as an agent? You don’t have to worry about being fired by your client. You own them. Yes, competitors love to talk about the amount of debt the agency and its investors face, but it’s worth noting that the UFC debt will be in a separate pile, away from debt incurred by the IMG purchase. One of the best defenses the agency can make is that investors at SoftBank, Fidelity, Tencent, Sequoia Capital and Dell aren’t crazy. They’ve in effect placed not only funds but confidence in WME-IMG, and newly promoted co-president Mark Shapiro and his team have aggressively focused on a 360-degree approach for the UFC and other properties involving brand extensions, content creation, event ownership, rights fees, naming rights and more. CAA already has a very strong foundation in these areas, so grab a box of popcorn, sit back and watch the battle ensue in 2017; it’ll likely be a doozy. 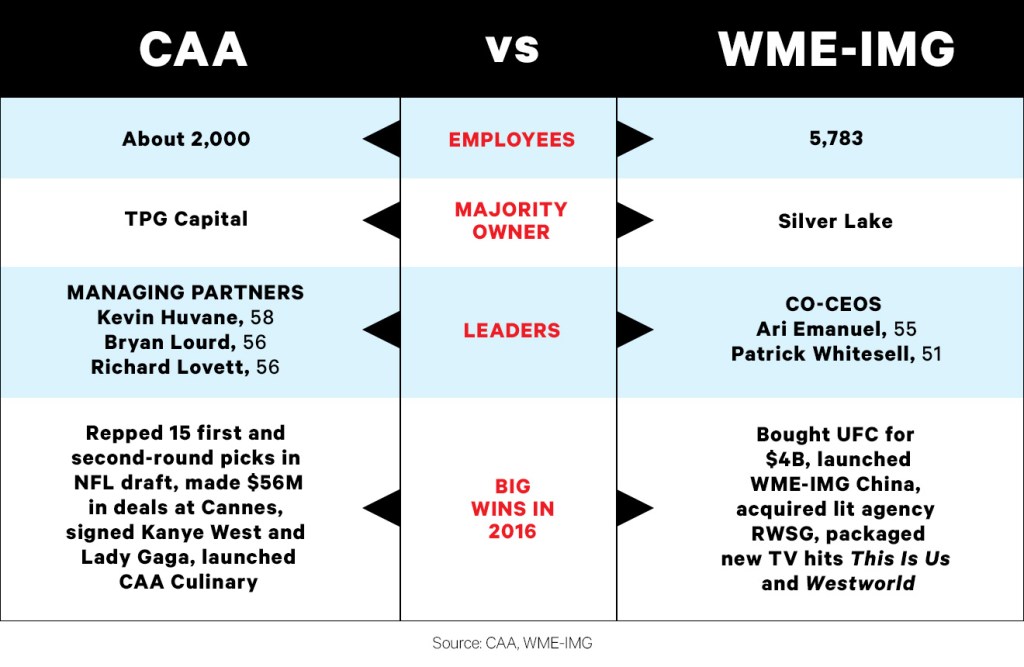 Investment funds are on the minds of the UTA leaders as well, but in a different way. They hope 2017 will see the agency finally obtain outside financing, not necessarily to make acquisitions but in order to help finance client content. It’s a priority moving forward. The agency has doubled in size in the past several years — with roughly 300 agents now on board — so the year ahead will further prove whether UTA can continue to brand itself somehow as both a big and small agency, one that can compete in several categories with CAA and WME while at the same time promising clients a more intimate connection than the giants can.

Two further big blips on the UTA radar screen: Competitors believe the agency hasn’t seen a valuable return on the big raid it staged last year, which brought a dozen CAA agents over (an operation that involved probably $14 million in overhead). Yet in all fairness, not much time has elapsed since the CAA talent came over. But more importantly, it is possible, even likely, that 2017 will see neither victor nor loser from the lawsuit that CAA brought against UTA. That legal drama is being played out in court and in private arbitration. Freud defined maturity as the ability to handle ambiguity, so UTA is being further tested because CAA has yet to present its figure for alleged damages. The court decisions will further define ground rules and repercussions of agency behavior toward one another.

If CAA’s leaders thought the lawsuit was going to intimidate or slow down UTA’s interest in their business, however, they’ve been proved wrong. Several years ago, UTA partner Jay Sures, enjoying life with such clients as Chuck Lorre, Steve Levitan and Judd Apatow, decided he wanted to do something with his keen interest in the news business. So he shepherded the UTA purchase of the legendary N.S. Bienstock agency and set his focus on CAA. As 2016 ends, he can look at a client list that includes such CAA alums as Josh Elliott, Don Lemon, Kate Snow, Jake Tapper, Chuck Todd and Elizabeth Vargas. CAA still has the prize ticket of ’em all in smart and savvy Megyn Kelly — likely to bring in $20 million as part of whatever glittery new deal she inks somewhere — and still has a strong bench beyond. But there is no doubt CAA’s news business doesn’t have the aura of invincibility it once had.

On the sports broadcasting side, CAA’s Nick Khan has led an aggressive hunting spree for clients including Kirk Herbstreit, Michelle Beadle, Tim Tebow, Colin Cowherd, Skip Bayless, and Stephen A. Smith. Recently, Khan closed a deal for Mike Greenberg that makes him one of the highest-paid sports personalities at ESPN and beyond (reportedly north of $6.5 million a year).

But the on-air-personality business is about to get even more interesting. ICM Partners is expected to begin the year by formally announcing the acquisition of Headline Media Management, which just completed a multiyear extension for Savannah Guthrie at Today. ICM is happy to proclaim it is not suffering from media company envy; its leaders are happy with new offices in Los Angeles and New York and want to concentrate more on their client business than building a bigger mousetrap.

CAA let go of several dozen agents in the past year, and some competitors believe the number is north of 50 — with Lisa Shotland, Lee Horvitz, Ashley Davis and Spencer Baumgarten among the crowd — all part of a continued raising of the bar on what is expected from agent production. Many of those agents have found homes elsewhere, including at ICM, UTA and Paradigm; some have transitioned into being managers. In 2017, expect more departures from the big agencies as they seek to be more profitable in preparation for change with their private equity partners down the road.

But let’s take a step back for a wider view of 2017. Could there be a better port of entry into the ever-changing intersection of media, technology, culture and finance than the agency business? Perhaps, but it’s doubtful. For all their scrambling for deals, companies like CAA and WME-IMG also are — more than ever — competing laboratories that investigate the myriad riddles of the content universe. Note to file: Don’t be naive; it’s still about dollars. That’s why 2017 also will witness several agencies attempting to turn content production into significant revenue streams. CAA has been discussing an “international production consortium,” according to several sources, and wants to plant a flag in the production business. WME-IMG stood by client Steve Harvey when he made a mistake during the live telecast of the WME-IMG-owned Miss Universe Pageant; that support, and some passionate pitching, resulted in Harvey shifting his daily talk show to a partnership with IMG rather than NBCUniversal.

But UTA and others look at such moves differently. They believe the ventures place them not just in competition with other agencies but also with their clients — who in turn have production companies of their own that would love such opportunities. In the coming year, some agencies will doubtless have to mollify such client concerns.

And what about the smaller agencies devoted to smaller agendas? They’ll continue trying to represent the hell out of creative people who in turn will produce more great storytelling on screens of all sizes. God bless ’em. May they thrive as well. And, in the spirit of the holiday season, may there always be room enough for all.