With a few words in a legal filing, AT&T may have saved its $85.4 billion takeover of Time Warner. If so, the timing couldn’t be better, as Wall Street has been taking bets on which draconian concessions the companies would make to placate the U.S. Department of Justice.

The DOJ, citing antitrust concerns, wants either Time Warner to jettison Turner Broadcasting or AT&T to sell DirecTV before blessing the marriage, which the government sued Nov. 20 to block. And since AT&T CEO Randall Stephenson has insisted he won’t sell CNN, many were speculating that a compromise could see Time Warner off-loading other chunks of Turner.

But the telecom giant threw a curveball Nov. 28. In response to DOJ concerns that AT&T would jack up prices for distributors to carry Turner channels, AT&T promised that if the merger happens, Turner networks such as TBS and TNT would not go “dark” for any pay TV distributor for seven years. This is akin to a commitment not to abuse the increased market power of the merged company, and some analysts call that a stroke of genius that takes the air out of the DOJ case. Many are now advising clients to buy Time Warner shares, which have fallen since the DOJ suit.

The AT&T-Time Warner promise also suggests “baseball-style” arbitration in case of an impasse with any pay TV distributor over carriage fees for Turner nets, meaning the parties would submit their best offers and an arbitrator would decide the fair market price. “In a single commitment, AT&T has gotten to the very heart of the DOJ’s case,” research firm MoffettNathanson said in a Nov. 30 report. “It now becomes much harder to reject the deal.” After all, the judge hearing the DOJ legal case signed off on that same condition in a consent decree with Comcast that helped seal the approval of its acquisition of NBCUniversal more than five years ago.

Still, few expect the DOJ to roll over, and some insiders believe President Trump’s personal vendetta against CNN, an outlet he dismisses for its “fake news,” is playing a role in the DOJ’s hardball tactics. “Any agreement that results in us forfeiting control of CNN, whether directly or indirectly, is a non-starter,” Stephenson said Nov. 20, sparking rumors he’d be more willing to part with entertainment assets than news assets.

Cowen analyst Paul Gallant argues that a sale of TBS or TNT, though painful, “might let the DOJ declare victory” and approve the deal, while Stephenson could keep CNN and both sides could save face. Some estimate TBS and TNT alone could fetch north of $25 billion.

Others don’t see AT&T making any concessions involving content, even if it leads to abandoning the deal. In that case, DirecTV could be on the hot seat. “The traditional satellite business is in deep trouble, and selling DirecTV would be my desired divestiture,” says Steven Birenberg of Northlake Capital Management, but he doesn’t see it happening. “Selling DirecTV or Turner is a deal-breaker,” adds Ben Weiss, chief investment officer at 8th & Jackson Capital Management. “AT&T wants to bundle premium content with nationwide video distribution and wireless service. Selling either asset would stifle that plan.” And BlackVault Investment Team calls the Turner unit “the polished gem” of Time Warner, one that is worth nearly $42 billion.

Regulators also fear a combined AT&T-Time Warner would lead to consumers paying more for HBO, but CEO Richard Plepler tried to put that issue to rest Nov. 29 when he said that the premium channel has grown to 130 million worldwide subscribers because it is affordable. It would be “dis-economic” for AT&T to raise the fee it charges distributors to carry the channel, he said: “We strove to lower prices, not raise prices, because we saw growth in scale and penetration.”

Wall Street already has started placing bets on who’s likely to make a run at Time Warner should the acquisition fall apart. Guggenheim Securities analyst Michael Morris says regu­lators would bless a Time Warner hookup with Disney, CBS or even 21st Century Fox, which itself has been looking to off-load assets and made an unsuccessful 2014 bid for Time Warner. Says Morris, “We see very few cases where one of these combinations would create a prohibitive business concentration.”

And while Time Warner shares could crater if no suitor emerges, the pain for CEO Jeff Bewkes would be temporary, say analysts, given that CNN and HBO seem to be on a roll. Several analysts, in fact, put Time Warner’s value at $111 per share or higher, even though shares closed at $92.71 on Dec. 4. That’s probably more than what AT&T will pay to acquire the company, if and when the DOJ allows it to do so.

It’s been almost 14 months since AT&T said it would acquire Time Warner for $85.4 billion in a deal that valued each share of the media conglomerate at $107.50. And in that time, some analysts say the shares are now worth more than that. Turner — which includes TNT, TBS and CNN — has premium cable brands as well as NCAA tournament basketball rights locked up through 2032, NBA rights through 2025 and MLB rights through 2021. Meanwhile, HBO boasts 130 million subscribers, and an increasing number of consumers are viewing HBO Now, the digital standalone service, as a legitimate substitute for Netflix. Here’s how one analyst values the conglomerate. 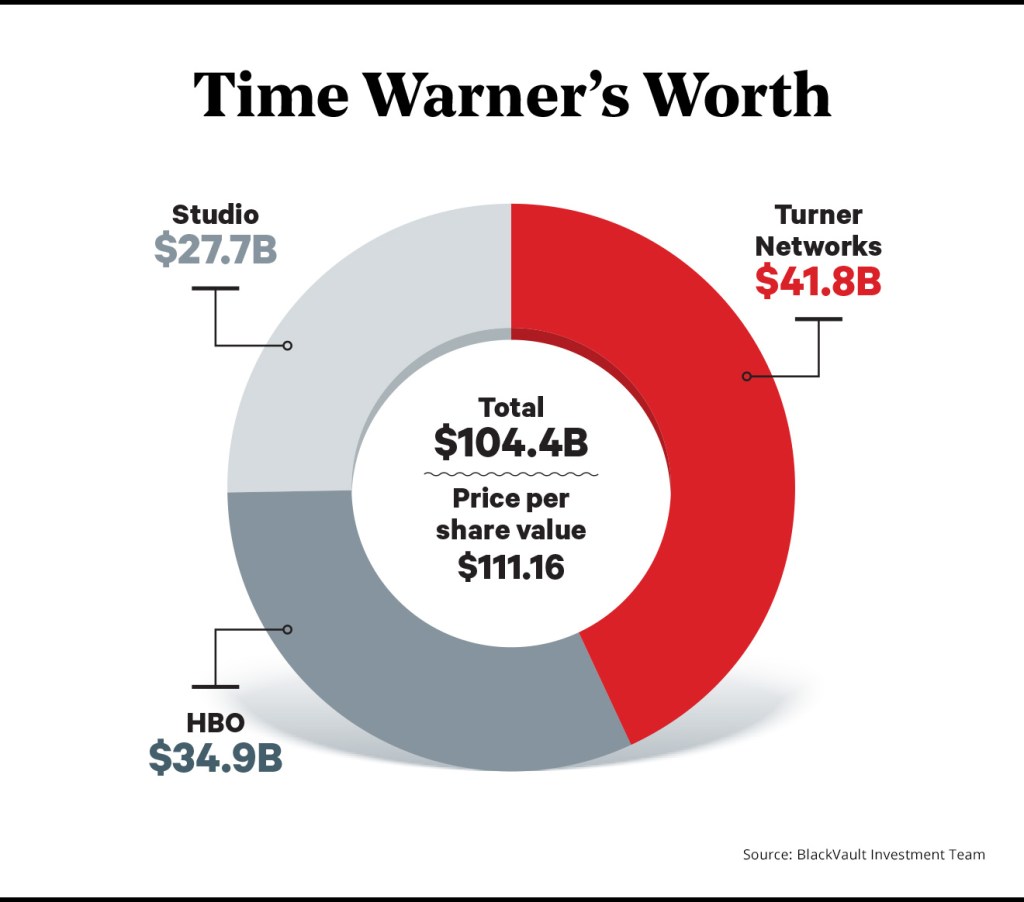