Continue to The Hollywood Reporter SKIP AD
You will be redirected back to your article in seconds
Skip to main content
February 27, 2020 7:05am

The twilight of basic cable’s scripted era has arrived. Steep linear ratings declines and parent companies more concerned with their burgeoning streaming businesses are prompting a new commitment to less expensive nonfiction programming — and even the networks known for original dramas, like TNT and USA, are scaling back.

“Cable is now the comfort food of media,” says ITV America CEO David George, a top supplier of unscripted content. “The bigger swings, the scripted swings, are happening at the streamers.”

Speaking to investors Jan. 29, WarnerMedia CEO John Stankey announced that his company’s own big swings would be reserved for upcoming streamer HBO Max. His suite of legacy Turner networks (TNT, TBS, Tru), in turn, is set to become a more aggressive buyer in the unscripted space. “You can get the same rating at a fraction of the price,” adds George. “You can take 30 swings, as opposed to one or two.”

This reallocation of programming budgets makes sense, considering the need to overstuff subscription services hitting an already crowded marketplace, as well as cable’s recent low batting average in the scripted arena. USA, which has seen its scripted efforts more than halved since its “Blue Sky” heyday, launched pricey anthology Briarpatch out of The Sinner on Feb. 6. A steep audience decline in the second episode prompted the network to shift the series to the unorthodox 11 p.m. Monday time slot in hopes of luring more viewers from a WWE lead-in. Even middling triumphs are becoming hard to find.

Apart from a few outliers — The Walking Dead‘s lingering, if diminished, thrall on AMC, Paramount breakout Yellowstone and History dramas such as Project Blue Book and Vikings — scripted is grossly underperforming on basic cable. In 2019, scripted series represented 24 percent of the 25 highest-rated original series on cable. That’s down from 50 percent just five years ago. Thank streamers for sucking up the oxygen in that room.

“Streaming has really excelled in terms of getting people to watch scripted shows, but cable still has the edge in the unscripted world,” says NBCUniversal president of lifestyle networks Frances Berwick, who’s solely focused on unscripted after brief dalliances in scripted on E! and Bravo. “The paradox of choice is that sometimes you just want a lean-back experience without the endless scroll.”

Bravo has enjoyed atypical stability in the cable space, with ratings holding largely steady from 2018 to 2019 thanks to franchises such as The Real Housewives. Scripted-focused networks were not nearly as fortunate. FX and AMC sunk double digits in 2019, the latter hemorrhaging 30 percent of its primetime showing among adults 18-49. A few programmers have seen the tide turn and have shifted strategies. A+E Networks Group president Paul Buccieri announced a course-correct at A&E in 2017, abandoning its pursuit of scripted and doubling down on high-minded nonfiction like Leah Remini’s Scientology and the Aftermath and Live PD. For those networks hoping to do the same, Buccieri cautions that they cannot do it with just a handful of series. “Changing a brand isn’t easy,” says Buccieri. “When you change a brand, you need consistency for the viewers and a real volume of similar, like-minded content.”

In success, unscripted provides a rare return on investment and unparalleled scale. A&E’s Live PD reinvigorated the network’s weekends and prompted an early renewal for a whopping 450 hours. On TLC, Discovery’s most resurgent network, the sprawling 90 Day Fiancé franchise occupies three slots in cable’s list of top 10 series. Those two series, more than others, come up in pitch meetings.

And unscripted producers, vocally displeased with budgetary constraints at Discovery Networks and stalled development at Viacom’s cable portfolio in recent years, are (for once) in a position to be choosy about where they’re taking their next big ideas. Several producers who spoke with THR stressed that the cable networks moving into unscripted won’t have much luck if they aren’t as easy to work with as, say, Netflix — on a buying spree and anxious to narrow the gap between its unscripted and scripted output.

“As more and more players get on the field, producers really have choices now,” says Michelle Van Kempen, who serves as the interim general manager of nonfiction producers guild NPACT. “They’re drawn to the places that are collaborative.”

Despite the ephemeral nature of most cable trends, this move from scripted to unscripted seems to be part of a broader identity crisis. Producers and executives alike are questioning how much longer some of these cable brands will even be able to stand on their own — and not just serve as pipelines to the broader conglomerate efforts like HBO Max, Peacock and Disney+.

“Most cable networks are preparing themselves to be a little box on a screen,” says George. “That little box has to have brand value to the consumer. 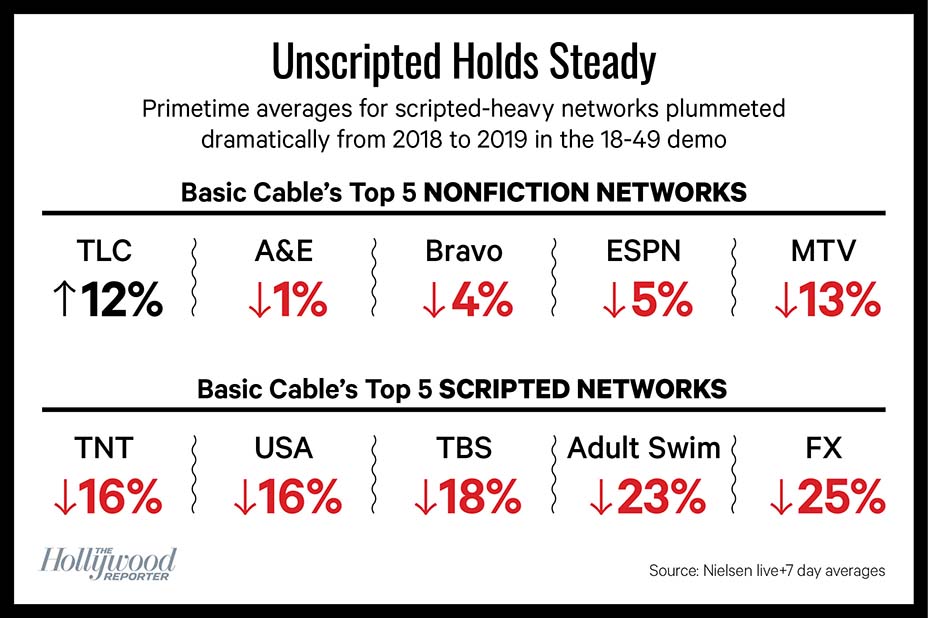