When Disney CEO Bob Iger lifted the curtain on the Disney+ streaming service in early April, analysts and investors cheered the offering for its clarity, aggressive pricing and ambitious content outlay. The long-awaited counterpunch to Netflix had arrived, yet there was one area where Disney’s strategy for the nascent streamer still appeared conspicuously opaque. Iger had summed up his ambitions for Disney+ by saying, “We are all in.” Did he mean “in China,” too?

China, the world’s second-largest video market by far, is the one territory where Netflix — despite its galloping growth and 148 million global subscribers — has made essentially no headway whatsoever. Disney, however, has Hollywood’s most robust business there, spanning dominance of the U.S. studios’ share of theatrical box office, the wildly popular Shanghai Disney Resort and a range of lucrative content licensing and merchandising deals.

Launching the first U.S.-based streaming service in China would theoretically yield hundreds of millions more in revenue — not to mention the bragging rights of beating Netflix to such an enormous piece of the global pie, which investors and analysts would surely welcome. Perhaps even more valuable to Iger, a direct streaming channel would serve as a powerful new anchor, or touchpoint, for the Disney ecosystem in China, so important to the company’s unique global business model.

“On first analysis, several factors do suggest that Disney should be better positioned, and better poised, to gain access,” says Stephen Saltzman, an attorney at Paul Hastings who has represented Chinese state-owned entities in dealings with Hollywood.

Following many months of failing to find a way to win regulatory approval in China, Netflix signaled in April 2017 that it was abandoning hopes for a direct launch, instead signing a landmark content licensing deal with Chinese streamer iQiyi. This March, however, iQiyi CEO Tim Gong Yu told THR that the deal had lapsed. “The results weren’t really as good as we had expected,” he said, “because so many of Netflix’s originals couldn’t pass [censorship].”

Disney’s family-oriented brand and content, however, would encounter far fewer challenges, Saltzman notes. And much of Disney’s IP already has a passionate fan base in China, especially Marvel tentpoles, which regularly appear on Middle Kingdom movie screens and top the local box office. Netflix originals, by contrast, mostly have had to start from scratch when licensed.

Similarly, Netflix leadership remain relative newcomers to the China market, whereas Disney’s executives have been working relationships and building guanxi in Beijing for decades — most evident in the successful launch of the Shanghai Disney Resort in 2016 after more than 20 years of courtship. (Around that time Chinese President Xi Jinping even welcomed Iger for a rare meeting inside China’s Great Hall of the People, the ceremonial seat of the country’s legislature, an exceedingly rare honor for a non-head of state.)

A thicket of regulation, though, still presents plenty of challenges to any swift launch of Disney+ in China. Direct investment into VOD platforms, as with television, is officially disallowed in China. It falls under the “prohibited” section on the country’s notorious “negative list,” the official set of foreign investment guidelines maintained by the Ministry of Commerce and the National Development & Reform Commission. “The operation of a VOD service by Disney+, or any other foreign streamer, would require a major change to the negative list,” explains Mathew Alderson, a partner at Harris Bricken Attorneys & Consultants in Beijing. “In the alternative, an express exception would be required under some other law.”

Even if Disney were to be granted a special dispensation, a secondary layer of regulation then would come into play. As in the theatrical film sector, Beijing imposes a quota on the amount of foreign content allowed onto China’s VOD platforms.

One potential workaround, according to another Asia-based entertainment executive who requested anonymity because of ongoing business with Netflix, could be a joint venture, or a turbo-charged exclusive licensing agreement, between Disney and one of China’s domestic streaming giants — iQiyi, Tencent Video or Alibaba’s Youku. A Disney+ layer, or channel, within a Chinese streamer would theoretically satisfy the quota requirement (a streamer’s annual share of imported content cannot exceed 30 percent of its total volume of Chinese content from the previous year), “because it would be offset by the Chinese partner’s large Chinese content library.” Such an arrangement would also meet China’s typical tacit requirement that majority control of the joint venture be in Chinese hands (in order to win permission to build the theme park in Shanghai, Disney had to cede 57 percent ownership to the state-backed Shanghai Shendi Group).

The limited precedent for a gray-zone play of this kind in the channels business isn’t particularly encouraging, however. In 2016, Disney attempted a similar arrangement for its DisneyLife OTT service — which carries a range of Disney content, including films, cartoon series and games — launching via a joint venture with Alibaba. The results were short-lived: After only five months of operation, Chinese regulators ordered the service suspended. No official explanation was given.

With the U.S.-China trade war raging — and outcomes for entertainment industries still opaque — Iger can be expected to keep his cards close until a resolution eventually arrives. “Disney has a good sense of the big picture and the small details when it comes to the China market,” says Adams Lee, an attorney specializing in trade law at Harris Bricken in Beijing. “They have probably already factored in a variety of scenarios depending on whether the U.S. and China trade war ends, escalates or maintains some variation of the current status quo.” 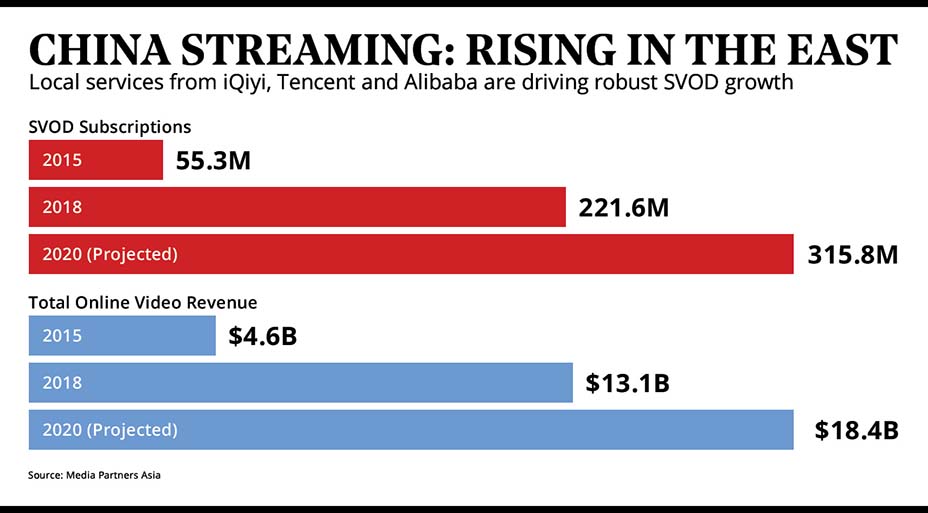