This story is Feature Partner content and was not created by the editorial staff of The Hollywood Reporter.

Producing lines that jump and shake with elusive humanity, traditional hand-drawn animation subtly reminds audiences of the artists behind the apparatus and the tedious nature of their creation.

“Hand-drawn animation is an art form that is unique in its ability to draw on the thousands of years of visual language handed down to us from the illustrators, painters and cartoonists of the past. We don’t only have to mimic live-action, but convey the emotions and inner worlds of our characters, not just with how they move, speak and act, but also with how they and their world are drawn and painted,” says Tomm Moore, co-founder of Cartoon Saloon.

Based in Kilkenny, Ireland, Cartoon Saloon upholds the meticulous tradition of hand-drawn animation. The small studio, set amid medieval buildings off the banks of the River Nore, has now earned five Oscar noms in total. Its latest release, Wolfwalkers, an Apple Original Film, has been nominated for best animated feature film at the 93rd Academy Awards.

Wolfwalkers, directed by Moore and Ross Stewart, is a hand-drawn coming-of-age tale of two adolescent Irish girls: Robyn (Honor Kneafsey), a young hunter, forms an unexpected friendship with a free-spirited girl, Mebh (Eva Whittaker), who lives among the wolves Robyn’s father hunts. “The main theme of the story is trying to find the balance that we need between nature and wildness, order and stability, rules and structure,” states Moore. 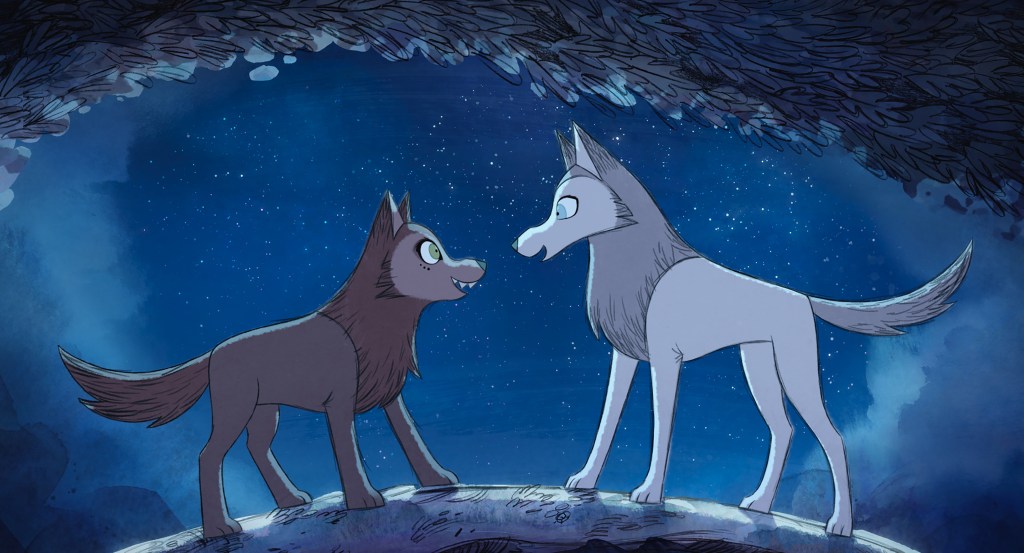 With inspirations that range from Samurai Jack to Picasso, Cartoon Saloon founders Nora Twomey, Paul Young, Moore and Ross Murray identify universal creative touchstones that resonate with global audiences. Their previous Academy Award-nominated films The Secret of Kells (2009), Song of the Sea (2014) and The Breadwinner (2017) show that hand-drawn movies are still capable of delivering an emotionally sophisticated narrative and cinematic experience.

An intimate look inside the creative process of current 2D animation masters is a rare experience that serves as an inspiration to artists and animation lovers everywhere. From pitch to production, The Art of Wolfwalkers shows the intense thought and planning that goes into making one cohesive vision from the work of several artists in a bespoke medium.

Solomon’s deep dive into Cartoon Saloon’s creative process also details Moore’s mythical starting point for Wolfwalkers and his loose trilogy of Irish folklore tales. The Secret of Kells, the studio’s debut feature directed by Moore and Twomey, illustrates the hallowed creation of the illuminated manuscript of the Book of Kells in the ninth century. Delving further into Irish folklore, Moore drew inspiration for his next feature, Song of the Sea, from the legend of the selkie — a creature that lives in the sea as a seal but becomes human on land.

Shapeshifter stories are ever-present across all cultural legend and lore, the most famous in Ireland being The Man-Wolves of Ossory, which enchanted Moore as a boy. Returning to the myth as a basis for Wolfwalkers, Cartoon Saloon artists studied wolves, built dioramas of 1650 Kilkenny and took field trips to the Irish forest to fully capture the wildness of the woods in contrast to the strict Puritan order of the medieval township. Moore states, “When we thought about the Wolves of Ossory, we got the idea of two kids, one from England, one from Ireland, and how their worldviews collide.” 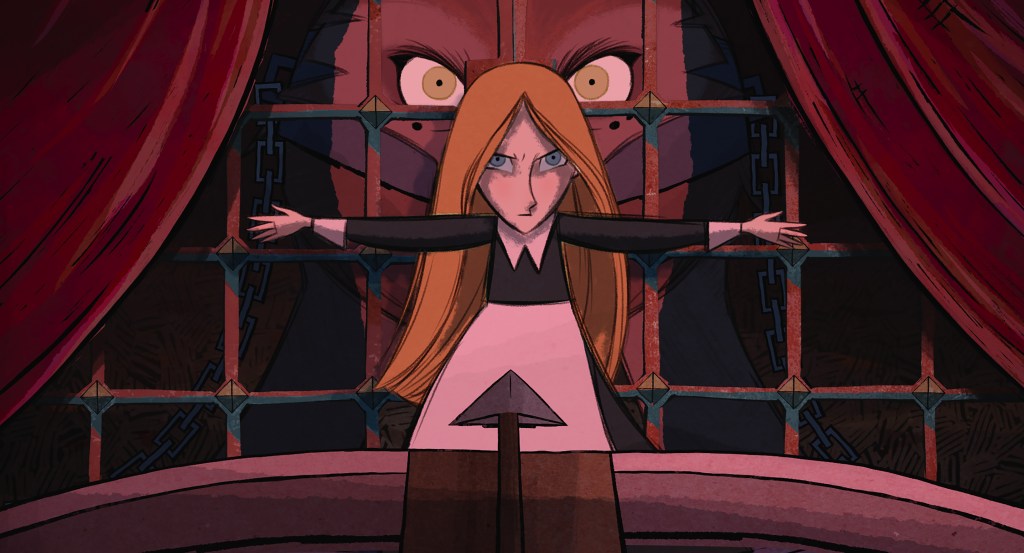 Intensely researched and true to the time period, Wolfwalkers is Cartoon Saloon’s first action film, complete with a villain in the form of Lord Protector Oliver Cromwell (Simon McBurney). Cromwell’s Puritan society had rigid rules that perpetuated strict gender roles. In that vein, it was extremely important that the lead characters honestly portray defiant female experiences, especially in the 16th century when women’s voices were limited.

“A story with female leads directed by two guys could be a little inauthentic. We wouldn’t be able to draw wholly from our life experiences. But we had really good female storyboarders who brought a lot to the personalities of Robyn and Mebh: I think they were drawing from their childhoods and brought a truth to the girls that would be hard for us to do,” notes Stewart.

Robyn comes to Ireland with the desire for a new life hunting with her father; instead, she’s sent to work washing dishes in the oppressive kitchen. By contrast, Mebh and her mother Moll (Maria Doyle Kennedy) are powerful females and the last of the Wolfwalkers. “In Irish mythology and folklore, they have a great reverence for the mother goddess, in complete opposition to Puritanism, which was a more male-focused religion. Moll and Mebh represent the Irish traditions and religion that are being stamped out,” Stewart continues. 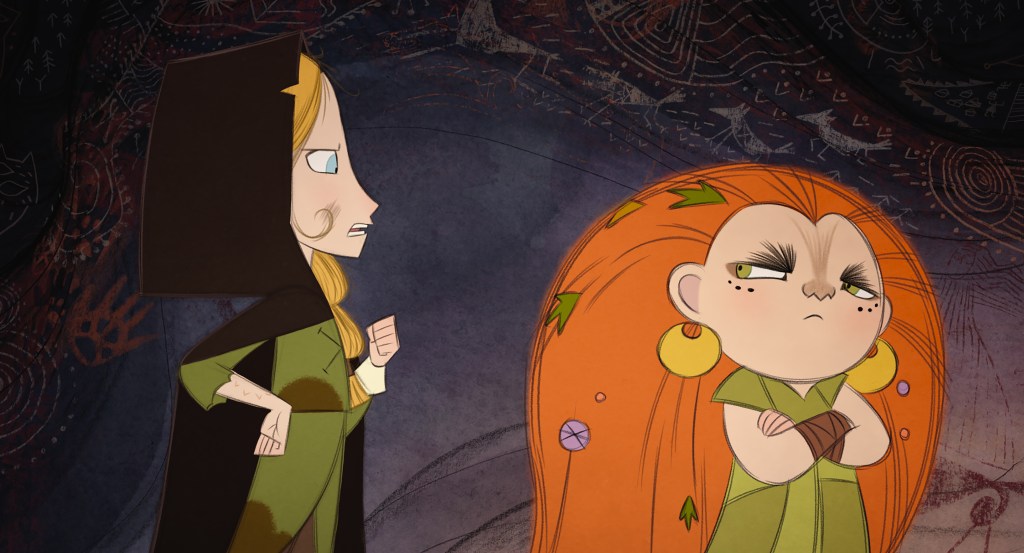 The female Wolfwalkers defend conventions that are becoming extinct — Cartoon Saloon embodies a similar sentiment in its vocation to the craft of hand-drawn animation. With Wolfwalkers, Moore and Stewart wanted to craft a narrative that put viewers inside the head of an animal being hunted. In The Art of Wolfwalkers, Solomon seeks to depict the mind of the creative hunters at Cartoon Saloon — obsessively hunting, tracking, editing and redefining their art.

The inspiring material contained within The Art of Wolfwalkers represents only a small glimpse at the enormous amount of work that goes into the development, preproduction and production of an animated film. However, Solomon accurately conveys the beauty of the many possible outcomes of a collaborative creative process that honors and upholds traditions of the past.

Academy Award nominee Wolfwalkers is available in theaters and on Apple TV+.