Patrick Lee is relieved. As he tells it, the author has spent the last 10 months trying to get Google to fix an error that he claims has made him concerned for his family’s safety.

Lee shares the same name as a billionaire Chinese businessman. Those who Google Patrick Lee, the author, have been shown his correct photo, Wikipedia description and age, but have been told incorrectly that he’s worth $5 billion, based on a Forbes page for the Chinese paper magnate.

Lee said he’s very uncomfortable with being presented online as a billionaire, and has been doing everything he can think of to get through to Google to have them fix this error on his Knowledge Panel (as it’s called), including getting a lawyer involved.

He said he feared that his family might get kidnapped and be forced to pay a large ransom. “It only takes one crazy idiot, anywhere out there, to believe Google about this, and act on it,” Lee wrote on Facebook Nov. 9. “Am I willing to bet my life against that happening?”

On Monday, The Hollywood Reporter contacted Google and asked about Lee’s case. Within a matter of hours, the $5 billion line disappeared from Lee’s profile. A spokeswoman for the company confirmed on Tuesday that the issue has been “resolved.”

“As reference, we’ve been improving the ways for people to claim and suggest changes to these Knowledge Panels, including the launch of our Posts on Google program earlier this year,” the spokeswoman said. “However, we know that the claim process doesn’t always work. In the past few weeks, we’ve been developing an improved way for people having issues to get help. We hope to have more to share on this soon.”

Lee said he’s thrilled that the issue has been resolved and finally put behind him. He had previously concluded that he’d need to sue Google to get them to acknowledge the issue, which he said would be ironic. “Google is telling the world I’m a billionaire, and I can’t afford to stop them,” he wrote on Facebook. “Actually, I can’t even afford to tell them they’re doing this.” 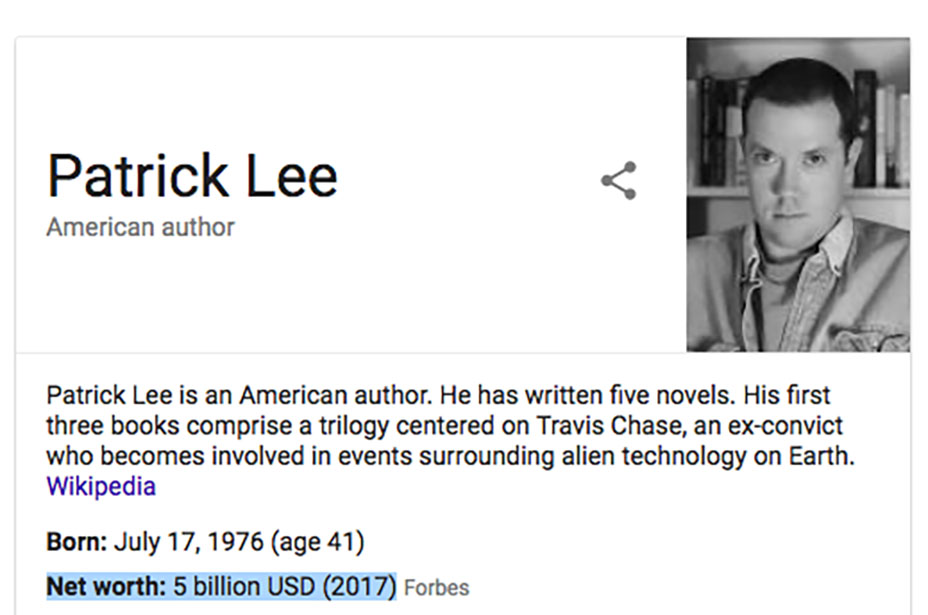