The hosts of Pod Save America had planned to use their Jan. 7 show to talk about the Senate wins that the Democratic Party had just pulled off in the Georgia runoff election. Instead, when host Jon Favreau turned on his mic, it was to tell his listeners that “we have been robbed of the joy from those victories by a mob of violent extremists who were encouraged to stage an insurrection against the United States government by the man who was supposed to be leading it.” Dan Pfeiffer, his co-host that day, described the Capitol Hill riot as “an incredibly sad day for democracy.”

Pod Save America, which regularly ranks among the top 25 shows on Apple’s podcast chart, has spent the past four years voicing the frustrations and fears of the Trump resistance after its launch in the wake of Hillary Clinton’s 2016 election loss. Like much of the media, the show has benefitted from the furious pace of and interest in news during the Trump administration. Listeners religiously tune in biweekly to hear Favreau, Jon Lovett, Tommy Vietor and Pfeiffer — all former staffers of the Barack Obama administration — unpack the news out of Capitol Hill with a liberal slant.

Crooked Media, the company that Favreau, Lovett and Vietor founded in early 2017 to house Pod Save America and other left-leaning media, has ridden the so-called “Trump bump,” too. The private company, which is profitable and has never taken funding from outside investors, has expanded its podcast slate to 21 titles, including daily news digest What a Day; launched a newsletter; created a robust merchandise business (sales of items like a $25 “Friend of the Pod” hat have increased 228 percent from 2017 to 2020); and established a social activism division that raised more than $46 million for progressive candidates and voter protection efforts during the 2020 election. Last winter, before the pandemic forced employees to work from home, Crooked Media doubled the size of its Hollywood headquarters for its 50-plus person staff, which includes new hires Ryan Sides, a former BET executive who will run digital strategy, and Sandy Girard, a SiriusXM veteran who will oversee current podcast programming.

But Biden’s victory means that, after Jan. 20, Crooked Media will no longer be the voice of the resistance. The question now facing the company is how its mandate will change when its politics more closely align with those of the guy sitting in the Oval Office. 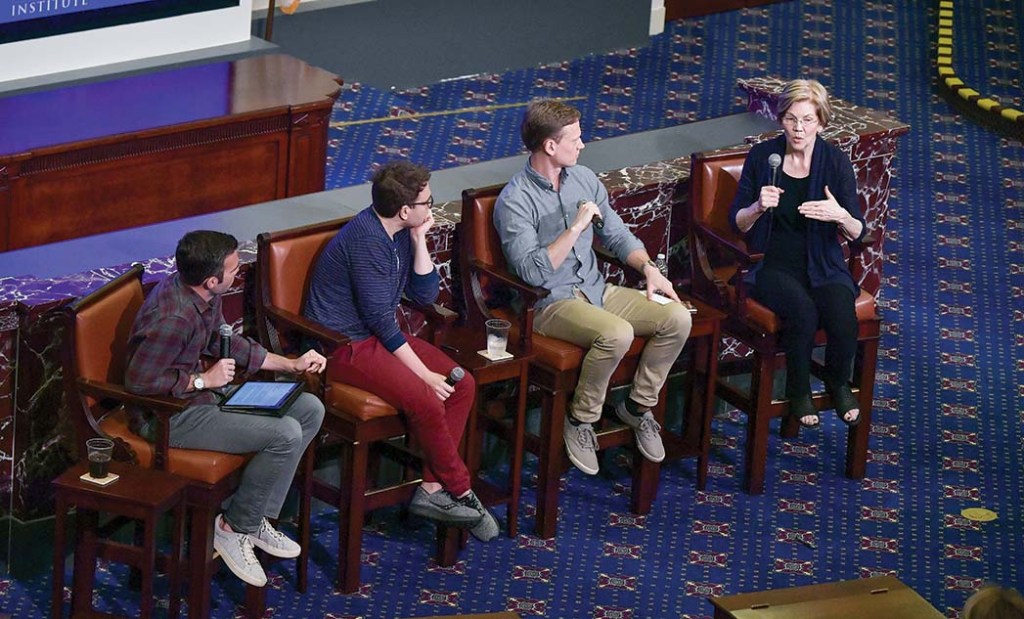 “From the beginning, we knew that this was about Trump as a symptom,” says Lovett, who co-created the short-lived NBC sitcom 1600 Penn after his time as an Obama speechwriter. “One takeaway from this election is that those larger problems, they remain. We are in an incredible fight against misinformation, against distrust, against these right-wing propaganda machines that are pumping out information that is leading to [Trump supporters] challenging the election.”

Though Crooked’s founders say the election changes little for the company, they are making moves to keep the business around for the long haul. That includes expanding beyond the “capital P” political coverage that has been its bread and butter. Plans are underway to launch at least three new podcasts this year, including narrative series 544 Days, about Washington Post journalist Jason Rezaian’s detention in Iran. The company, which recently hired commentator Jason Concepcion from Bill Simmons’ The Ringer, is eyeing adding more shows in arenas like sports “that could benefit from the Crooked lens,” says content chief Tanya Somanader.

“Our decisions are really dictated by what is going to help us grow our audience,” says COO Sarah Wick. The company also plans to invest in expanding its video capabilities, including shortform series for Crooked’s social platforms as well as big-budget Hollywood projects. Its first major TV job — outside of a series of HBO specials during the 2018 midterm elections — is a Hulu adaptation of Wind of Change, based on the podcast it produced with Spotify and Pineapple Street Studios about whether the CIA had a hand in creating the hit song from the Scorpions.

The story of how Favreau, Lovett and Vietor came to launch Crooked Media is one they’ve repeated enough that it’s calcified into a creation myth: They began podcasting for The Ringer in 2016 mostly as a hobby while they pursued post-politics careers, and their Keepin’ It 1600 show about the presidential election took off. Still, they figured they’d pack it in once Clinton was elected president. Instead, they sat stunned on election night watching votes come in. The next day, as they pushed Lovett’s Jeep Grand Cherokee down Sunset Boulevard after it ran out of gas, they began to hatch the business plan that would become Crooked Media. (The name is a not-so-subtle nod at their anti-Trump roots.) “What’s different about Crooked is we don’t just offer people the news and information, but we give them the tools they need to act, and we encourage them to act,” says Favreau, who served as Obama’s director of speechwriting for four years. “That sets us apart from other media.”

They always had designs to incorporate activism into Crooked, but it wasn’t until the 2018 midterm elections that they stumbled onto the plan for a hybrid political initiative and online community. Through the Vote Save America website, which launched in August of that year as a one-stop shop for information about competitive races across the country, Crooked raised nearly $3 million for progressive candidates and filled more than 22,000 campaign volunteer shifts. “I volunteered two days at one of Katie Hill’s staging locations, and there were so many Friend of the Pod shirts,” recalls political director Shaniqua McClendon of the former representative. Crooked doubled down on its Vote Save America efforts during the 2020 presidential election. More than 300,000 people used the website to “adopt a state” — an initiative designed to help volunteers on the ground in battleground states — and 28,000 people signed up to serve as poll workers on Election Day. “I don’t think we can definitively say we got Joe Biden elected, but I do think we played a huge role,” says McClendon, noting that in the last four days before the election, Crooked volunteers made more than 1.2 million calls for the Biden campaign.

Crooked’s election efforts wouldn’t be possible without its media arm. While Pod Save America remains its most popular franchise, it has seen total network downloads increase by 35 percent as it launched new shows from a range of voices, including recent additions Unholier Than Thou, in which journalist Phillip Picardi reevaluates his relationship with faith, and Hall of Shame, about the biggest scandals in sports history. “We try to find stories that pull back curtains,” says Somanader, who also worked for Obama before becoming Crooked’s first hire. The company is focusing on adding new shows when it finds “voices that have credibility and expertise” in a given field, she adds.

Crooked’s biggest swing to date was last summer’s Patrick Radden Keefe-hosted Cold War-era narrative podcast Wind of Change, which became a breakout for Spotify with 30 percent of the show’s listeners completing it in the first month it was available. “It was a really unique opportunity, especially because the show wasn’t political in nature,” says Spotify head of studios and video Courtney Holt. The espionage-minded Wind of Change adaptation, which Alex Karpovsky is developing with 20th Television for Hulu, has given Crooked a road map to follow for future narrative stories, particularly as it places greater emphasis on film and TV. “It’s illustrative of our ambitions going forward,” says Crooked head of development and production Sarah Geismer. “I really hope we become more of a home for filmmakers in general. We’re doing that now in podcasting, and as time goes on, my goal is that we are able to do that across all mediums.”

Crooked has picked a good time to set its sights on Hollywood. As evidenced by Chernin Entertainment’s multiyear deal to adapt Spotify shows for film and TV and the recently ordered adaptation of Serial Productions’ Nice White Parents, podcast IP has never been hotter. Podcast companies, too, have become the targets of an M&A frenzy.

Though Crooked has remained independent in its first four years, its founders are warming to the idea of bringing on financial partners. “Thinking about all the big things we want to accomplish — growing out our team, professionalizing a lot of things, making more kinds of content — to do those things will require more investment. We’re agnostic about how we get to that end goal, but we want to get to that end goal,” says Vietor, who, when asked if the company has been approached by potential acquirers, asserts that “no one’s knocked on the door and said, ‘Hey, we want to buy you.’ “

Though the company’s overt political aims might limit its pool of potential partners, the founders won’t sideline their values. “The mission for us is non-negotiable,” says Favreau. “By bootstrapping Crooked, we’ve been able to do what we want and do what we believe in. Whatever we do going forward, we want to make sure we can still do that.”