The Walt Disney Co. is taking a gamble on sports betting.

The entertainment giant, notoriously conservative when it comes to protecting its brand, will use ESPN as its entry point into the fast-growing sector. “Given our reach and scale, we have the potential to partner with third parties in this space in a very meaningful way,” Disney CEO Bob Chapek told analysts during a Nov. 10 earnings call.

The decision to pursue a multibillion-dollar betting deal is something of a strategic pivot for the company, which for years said that the only role sports betting had at ESPN was as one more piece of its TV programming.

It was on May 14, 2018, that the U.S. Supreme Court paved the way for legalized sports betting in the U.S. via its ruling in Murphy v. National Collegiate Athletic Association. A day later, speaking to reporters in a hallway in New York’s Minskoff Theatre after the channel’s upfront presentation, ESPN president Jimmy Pitaro (only two months into the job) sounded skeptical of an active role by the company in that line of business, calling the potential “interesting,” but only when it came to gambling-focused programming or segments on its TV shows.

“It is something that we will be thoughtful about,” added Connor Schell, who at the time was ESPN’s head of content.

That conservative approach continued throughout the remainder of Bob Iger’s tenure as Disney CEO, with the executive telling analysts during the company’s February 2019 earnings call: “I do think that there’s plenty of room, and ESPN has done some of this already and they may do more to provide information in coverage of sports. … But getting into the business of gambling, I rather doubt it.”

Two and a half years and a new CEO later, and the company has changed course. “We do believe that sports betting is a very significant opportunity for the company,” Chapek told analysts.

While Disney isn’t following in the footsteps of Fox Corp., which has its own betting platform, Fox Bet, it has held talks with a handful of betting operators about a partnership, multiple sources familiar with the matter confirm (Disney does own a small stake in DraftKings that it acquired from Fox). BetMGM, Caesars and DraftKings are all seen as frontrunners, though with so many players in the space, there is always the possibility for a wild card.

“It is an opportunity that many companies are spying,” Moody’s analyst Neil Begley says. “Disney’s brand in ESPN will certainly have strong advantages given its broad distribution and rights holdings. But I think that it could be a free-for-all among several of the big media groups, and there is risk of oversaturation, which could dilute the opportunity.”

Begley also highlighted some critical challenges for the Mouse House, calling it “a tricky plan for Disney, with its squeaky-clean family image.”

A former ESPN executive tells The Hollywood Reporter that the company’s family-friendly image has always been top-of-mind, noting that the company waited longer than some competitors to accept ads from sports betting firms and that even today the company isn’t running ads from cryptocurrency trading companies, unlike Fox Sports and NBC Sports.

So what changed? Changing consumer habits is one piece of the puzzle, with “gamification” becoming commonplace in apps and media. ESPN+, like other streaming services, is all but certain to add gamification functionality in the future as it seeks to grow engagement and its subscriber base.

Importantly, the major sports leagues all got on board. In April, the NFL, led by Roger Goodell, announced FanDuel, DraftKings and Caesars as its signature sports betting partners (which includes IP and data rights), and in August it announced BetMGM, PointsBet and WynnBET as its authorized sports betting partners for the season, while the NBA, led by Adam Silver, unveiled a deal with DraftKings and FanDuel earlier in November. The MLB, NHL, UFC and other leagues have also signed betting deals.

“The market has shifted. When you have the leagues on board, when you have state governments on board, it is hard to take a moral stance against being involved with gambling,” says David Schwartz, a gambling historian and professor at the University of Nevada Las Vegas.

As a result, the perception of sports betting has changed, a point that Chapek made light of on the earnings call. “We have done substantial research in terms of the impact not only on the ESPN brand, but the Disney brand in terms of consumers’ changing perceptions of the acceptability of gambling. And what we’re finding is that there is very significant insulation,” Chapek said. “It actually strengthens the brand of ESPN when you have a betting component, and it has no impact on the Disney brand.”

But the push into betting also comes with real risks, beyond the hypothetical brand impact. What happens when gambling, journalism and programming mix? And is Disney late to the party?

“Sports betting might be a significant opportunity, but also a potentially big headache,” says former Wall Street analyst Hal Vogel, CEO of Vogel Capital Management. “This is already an area of tremendous competition, and Disney is already starting from behind many others. Also, mixing reporting at ESPN with betting operations might eventually lead to conflicts of interest.”

At the heart of the matter are the details of any partnership. If a sportsbook is just paying for the right to use ESPN’s branding in its app, it may be, as one source put it, “the lowest-hanging fruit in the Disney world.” But if the deal also includes some element of exclusivity around advertising or programming access, Disney could find itself leaving money on the table.

“You are not going to advertise Coke and Pepsi in the same commercial. You just took the yield from one of the fastest-growing segments of advertisers, and moved it away from your potential opportunity,” says Lencheski. “That one player would have to produce a significant amount of money to me as a network to make it worthwhile to walk away from three, four, five years’ worth of revenue from this segment while this land rush for the next generation of bettors is happening.” 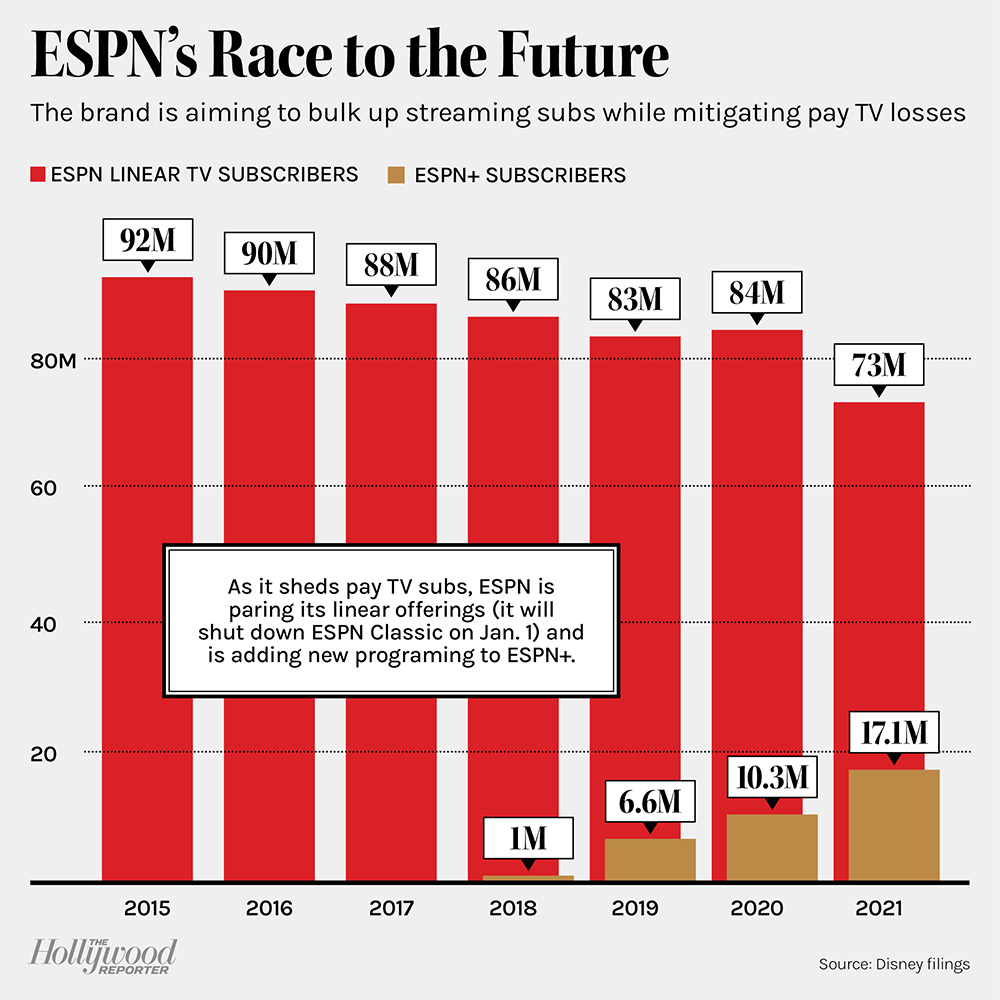 A version of this story first appeared in the Nov. 17 issue of The Hollywood Reporter magazine. Click here to subscribe.