How high can Disney+ soar in the next couple of years? The streamer, with 116 million paying global subscribers, has a goal of 230 million to 260 million by the end of fiscal 2024. But Wall Street isn’t as bullish as it had been.

Ahead of Disney’s Nov. 10 earnings update, several analysts have cut their Disney+ subscriber forecast estimates. Downgrades began after Disney CEO Bob Chapek told an investor conference in September that the company was expecting a “low single-digit millions” gain in subscribers in the quarter that was about to end; the Street consensus had called for about 17 million. 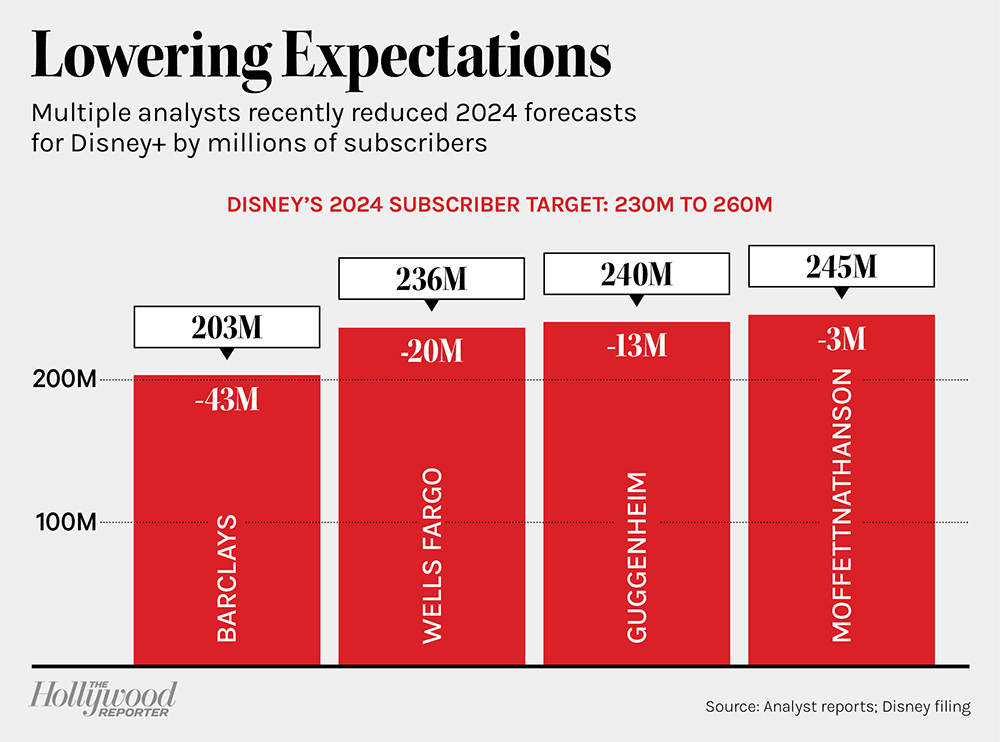 Factors in the slowdown include the COVID-related suspension of the cricket league (available on Disney+ Hotstar in India), production delays and a slower-than-hoped Latin America rollout, but analysts also cite longer-term issues, including a need to boost content spending. “As we learn, though, we’re finding out there’s tremendous seasonality in this business that we may not have known about before we really got into it,” Chapek noted during an earnings call on Aug. 12.

Wells Fargo’s Steven Cahall was an early mover in cutting his 2024 projection in a report titled “Paradise Lost,” saying: “Now at the lower end of the Disney+ long-term guidance, we expect investors to wonder if it’s a risky bar.” He also dropped his stock price target by $13 to $203 due to the subscriber “reset” by the company.

Barclays analyst Kannan Venkateshwar cut his 2024 Disney+ user estimate even below that. The analyst also reduced his stock price target by $35 to $175 and his rating from “overweight” to “equal weight,” arguing that Disney’s “long-term streaming guidance could be at risk.”

Venkateshwar called the rollout of Disney+ “the most successful streaming launch ever,” but added:  “This year however, Disney+ growth has slowed significantly, despite launching new franchise titles, day-and-date movie releases and Star+.”

“To get to its long-term streaming sub guide, Disney needs to more than double its current pace of growth to at least the same level as Netflix,” Venkateshwar warned. “We believe this may be tough to do.” Netflix disclosed on Oct. 19 that it had added 4.4 million new subscribers in its latest quarter, for a total of 214 million globally.

Guggenheim’s Michael Morris and MoffettNathanson’s Michael Nathanson also lowered their forecasts. Nathanson in a recent report made this suggestion: “Disney needs to both invest in more original scripted general entertainment content” and also market “Disney+ in a bundle to … older households.”

CFRA Research’s Tuna Amobi, in contrast, is waiting, adding of the subscriber goal, “Despite the expected quarterly slowdown in sub growth, I’m sticking for now with the ballpark of the longer-term guidance, which seemed very conservative to begin with, barring any other unforeseen trends or data points.”

This story first appeared in the Oct. 27 issue of The Hollywood Reporter magazine. Click here to subscribe.