Could Netflix’s pain be someone else’s gain? A number of entertainment companies are counting on exactly that. As consumers grapple with higher subscription costs, and with more subscription video offerings than ever, those companies in the free, ad-supported streaming space (usually referred to as FAST, in industry jargon) think their time is now.

In fact, many of the biggest players in the FAST space will be familiar to close followers of the entertainment business. There’s Pluto TV, owned by Paramount; there’s Tubi, owned by Fox Corp.; there’s Freevee (formerly IMDb TV), owned by Amazon; there’s Peacock’s free tier, owned by NBCUniversal; and there’s Roku Channel, owned by, well, Roku.

All of the services combine a wealth of licensed TV and movie content (in some cases from the libraries of their corporate parents) with some original programming. And all lean in hard on advertising, hoping to get as many eyeballs as possible in a bid to be the broadcasters of the streaming era. “Nothing helps drive impact like exclusive premium content, especially when surrounded by an engaging ad experience,” NBCU executive vp agency partnerships Peter Blacker said during his pitch to advertisers at NewFronts.

And there is evidence that consumers may be receptive. Tubi says it has reached 51 million active users, while Pluto TV says it has more than 67.5 million active users and Roku says its Roku Channel reached an estimated 80 million by the end of 2021. Amazon doesn’t break out Freevee’s numbers but has suggested in earnings reports that it has tens of millions of users. According to Deloitte’s 2022 Digital Media Trends Survey, there is real acceptance for these services from consumers, many of whom are fed up with cobbled-together streaming menus that continue to rise in price year after year. 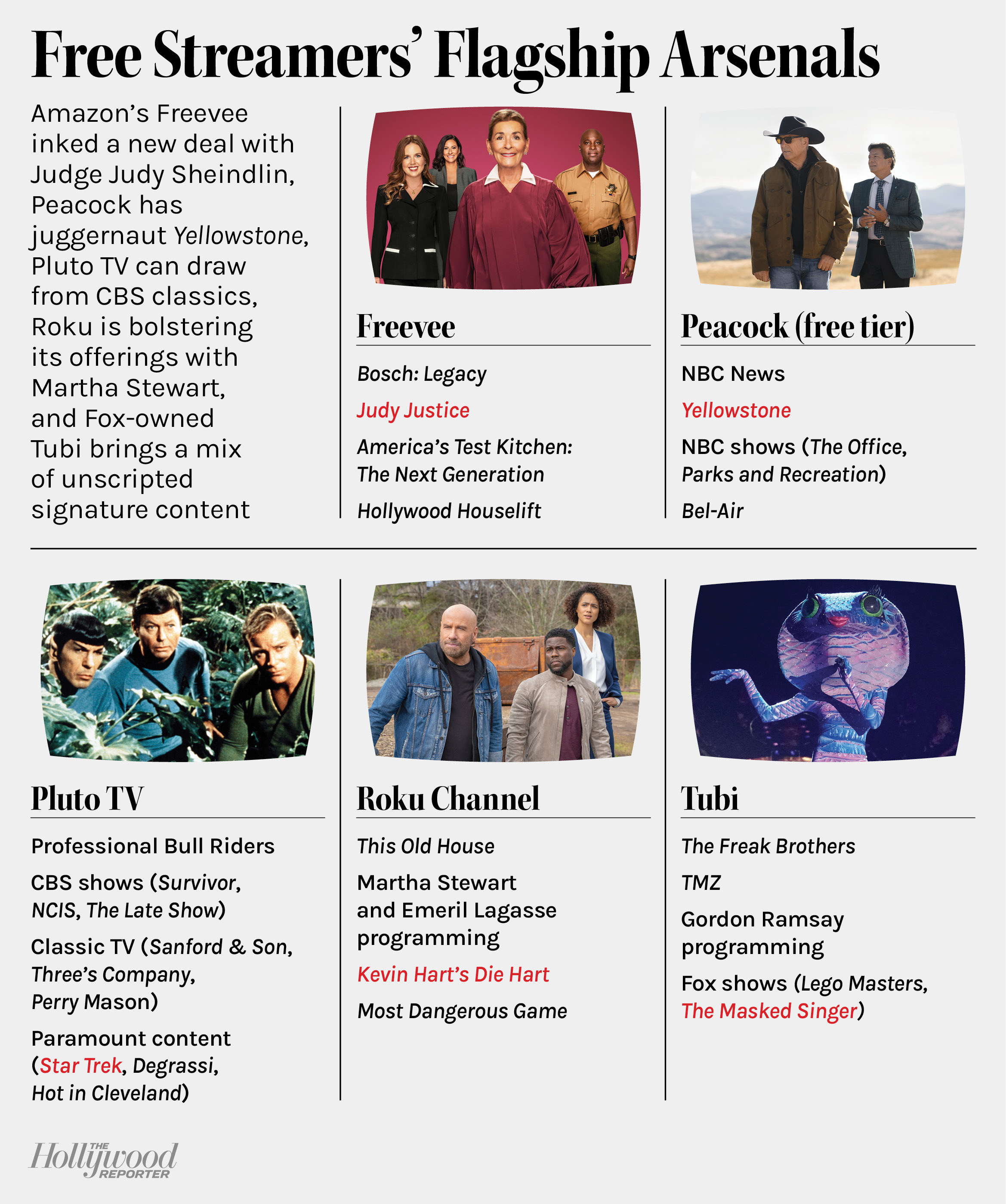 Deloitte’s survey found that 34 percent of U.S. consumers would prefer a free streaming service that had 12 minutes of ads per hour. By contrast, only 25 percent of consumers said they would prefer a service that cost $6 a month but had six minutes of ads per hour. In other words, the potential total market for FAST services may be larger than ad-backed subscription offerings like Hulu or HBO Max, or the new ad-backed tier that Netflix is pursuing.

“​​They’re comfortable with [ads] as long as they are relevant,” says Jana Arbanas, vice chair and leader of Deloitte’s U.S. telecom, media and entertainment business, in an interview tied to the survey. “We have a really wide range of needs in terms of consumers, and for streaming companies to retain that longer-term engagement, they have to present a range of options.”

And that was never more apparent than during the IAB NewFronts, where free, ad-supported streaming was front and center. At Peacock’s NewFronts presentation, executives sought to differentiate its ad-supported service by emphasizing the streamer’s “premium” content and ad innovations, including a new feature that will allow marketers to see their products edited directly into scenes from new NBCUniversal shows and films.

Amazon also heavily promoted its newly rebranded Freevee service at the start of its NewFronts presentation, bringing out Amazon Studios chief Jennifer Salke to herald the service as one “perfectly positioned to continue its growth year after year, just as Prime Video has” inside a packed Koch Theater at Lincoln Center. Amazon executives told audiences at the NewFronts presentation that the Freevee content slate has grown 70 percent year-over-year.

“Freevee shows, and now original movies, are well-produced, entertaining and broadly appealing, on par with the best of broadcast cable and paid streaming,” Lauren Anderson, the co-head of content and programming for Freevee, said.

Roku has been doubling down on a push for original content for its Roku Channel. In recent months, the streaming company signed a film output deal with Lionsgate, brought on three unscripted dating shows and signed co-production deals to develop seven new culinary and lifestyle channels with such celebrities as Martha Stewart and Emeril Lagasse.

At Pluto TV, viewing hours are also on the rise, growing “double digits” year-over-year, according to the company’s most recent earnings release. And Paramount executives have positioned it as an added value for its paid streaming service, Paramount+. “It’s worth noting that one of the things that makes Pluto TV so special is that, rather than seeing it as strictly an alternative to other services, many viewers see it as complementary to linear and paid streaming,” Paramount Global president and CEO Bob Bakish said during a May 3 earnings call. “In fact, 80 percent of Pluto’s customers also subscribe to paid streaming services.”

On the Roku platform, company executives said during an April 28 earnings call that free, ad-supported apps have been growing at a faster rate than subscription streaming apps since the price allows consumers to download as many as desired.

And having both viewing sectors on one platform is particularly attractive to advertisers, Bakish said, because of the total addressable market it brings in. “When advertisers see the massive scale of our linear and streaming offerings, including services like our Paramount+, essential tier and our industry-leading Pluto TV FAST service, they instantly recognize that we provide access to a highly valuable, diverse audience in a manner and scale that’s hard to match,” Bakish said.

Still, Wells Fargo analyst Steven Cahall said in a May 3 note that the “majority” of direct-to-consumer value at Paramount remains with Paramount+, while Pluto, as well as Showtime, showed “softness” in net user adds during the first quarter. Ultimately, however, these companies are betting that their FAST offerings will be the next big thing in streaming and can give them a foothold as the $65 billion-plus in annual TV ad spending moves to streaming. As Roku CEO Anthony Wood noted on the company’s April earnings call: “More generally, I think we believe that more AVOD offerings will accelerate the movement of traditional TV [ad] budgets into streaming.”

A version of this story first appeared in the May 10 issue of The Hollywood Reporter magazine. Click here to subscribe.