It’s a snowy January day in Southeastern Pennsylvania, and Blizzard Entertainment executive Pete Emminger is standing in front of a 5,000-square-foot stage that, over the next six months, will travel to 11 different markets across North America and Europe, including London, Paris and New York, for the inaugural season of the Call of Duty League.

Around Emminger, some 170 people are moving risers, setting up LED boards and conducting tests. The stage will soon be packed up and transported to Minneapolis for a kickoff weekend starting Friday, Jan. 24, and Blizzard’s vp global broadcast is here inside this massive facility to rehearse.

“No pressure,” Emminger says with a laugh.

Building a stage that can be packed up and moved is no small undertaking. Not only is it a large stage, but it also must hold over 50 tons of sound, lighting and video equipment, all rigged to the ceiling from 80 different points by 22 different technicians. Two miles of cables connect to 25 cameras stationed throughout the setup, all feeding into two production trucks with four VIX channels, six 4K 60p stitched LED screens and 20 different instant replay channels.

Having a setup that operates in Southeastern Pennsylvania is one thing. But making sure it works from city to city leads to unique issues, particularly being able to adapt to different venues. “Some of the places we go, we won’t need the stage that we’re standing on,” Emminger explains. “If it’s a theater, we’d build right on the theater stage; if it’s a venue like a concert hall, we would have to build our own platform.”

While league planners have a strategy in place for each city they visit, each host team will offer its own input into the setup. “Some requests are very simple,” says league director Nick Vartanian. “For example, Minnesota wanted a lot of say in the lighting design, they want a lot of purple. They may not care as much about where the teams enter from, but lighting is high on the priority list.” Atlanta, meanwhile, wanted input into the musical selections when the team walks out. “We want to make that connection to that local fan that’s going to build the fan base in that city,” adds Vartanian. 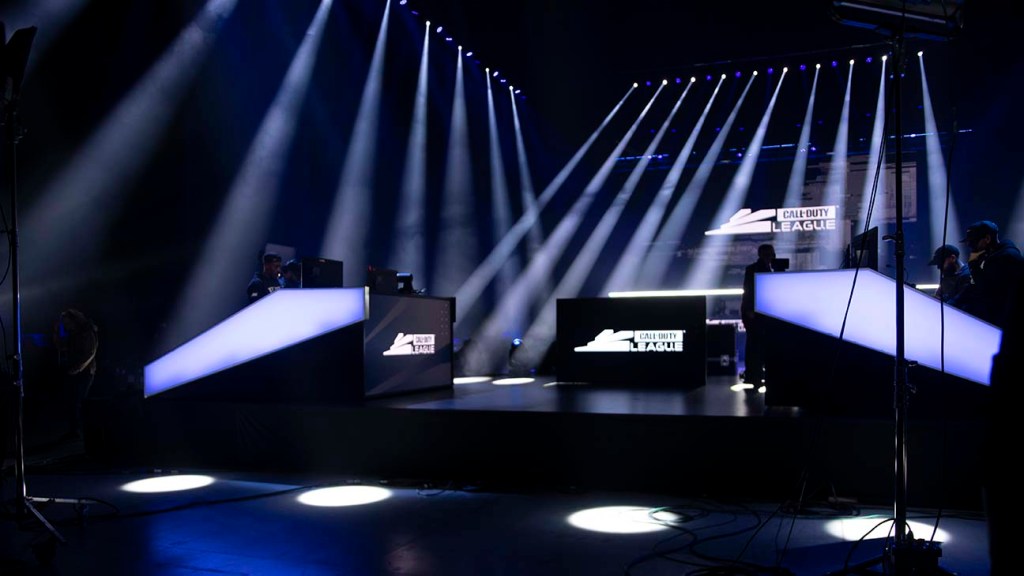 The stage layout has three key components, including a massive Call of Duty League logo that lights up the room, multiple LED screens and the player area.

In particular, the LED screens are key to following gameplay. Everywhere an attendee looks, there will be a screen in full view, displaying team logos, player names and in-match statistics that are updated in real time. The most visually striking display, however, is the Call of Duty League logo, which will tower over the players during the competition.

The approach, according to Vartanian, was to take inspiration from traditional sports arenas and to ask, “What can be brought from those traditional sports to this digital sport that would be competitive, yet awesome for the fans?” One idea executives have considered is to add premium seating on the stage that would mimic the experience of sitting courtside at an NBA arena. Another is experimenting with team entrances. “We’re playing with a lot of ideas,” Vartanian says. “Maybe the players come out front and center, maybe from the sides or the analyst desk. We even thought of them coming out on a dark stage and standing in front of the logo as the lights go up just as the game does in the multiplayer lobby. When our creative brains get going, we have fun, wacky creative ideas. That’s what we’re rehearsing for.”

Each side of the stage has setups for the teams’ five players and one coach. They’ll all be hooked up with the standard equipment: a PlayStation 4 console, Astro headset and Astro mixamp. (Players are allowed to bring their own controllers to compete.)

All aspects of the stage setup were designed with the players in mind. For example, the desks are built out of what Emminger describes as “high density plastic” with “nothing sharp that could affect the player’s performance.” Meanwhile, the LED screens will be placed so that players can’t see them during competition, which could create an unfair advantage.

The team has worked through many scenarios to keep games fair and balanced. Ryan Cole, senior technical manager for Activision Blizzard, offers one example: “Say we go to a venue where they have plexiglass around part of the venue, like over a VIP area. If there’s reflections of the screen on that glass we have to be mindful, and we’ll cover it up so there’s no integrity issues.”

Perhaps the most important piece of the setup is tucked away backstage: two redundant server trays that host all of the data needed to keep league matches online.

He continues, “Our methodology is to always have a server on site, so we could lose all internet to the building and keep playing matches.” While that sounds improbable, it happened at the Overwatch World Cup in 2018. “Luckily the games still continued, and because we were also on video fiber to Twitch and TV, it was completely undetectable,” Emminger recounts with a smile. “If you were watching at home, the only way you would have known is the player’s name went missing onscreen.” 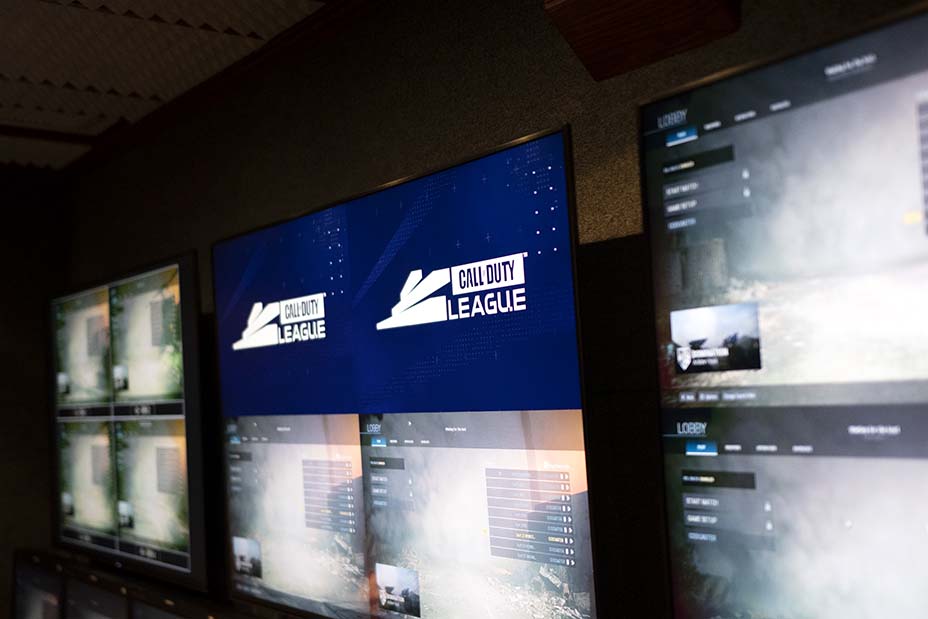 One of the main challenges in designing the arena was in creating not just a show but an experience. To do that, the team set up an analyst desk across from the main stage that, per Vartanian, can “up-level some of our programming and bring a lot of that energy that we’ll get from the events onto our broadcast.”

The analyst desk is also the setting for one of the league’s most interesting features: pre-show Modern Warfare 2v2 Gunfight mode matches featuring special guests. To host those matches, the desk splits in two, and the two halves turn to face each other, revealing full gaming modules likes those onstage. Attendees on the floor and in the immediate area will be able to fill the space to cheer on the players.

Cole is confident the desk is a winning idea, simply because fans will not be anticipating it. “Nobody will know what that experience is until we start it in Minnesota,” he says. “But once we do it, I think people will really want to be a part of that.”

In order to take on traditional sports, the Call of Duty League team knows that they must tell compelling stories. To do that, they’ve added some player-centric new features including an in-game time-out system. Under the new rule, coaches will be able to call time outs in the middle of a match to make player substitutions. For example, during a Search and Destroy match, a coach could be looking at a deficit of four opposing players left against his two, but one of his two remaining players is a top sniper. The coach could call time, sub in the sniper and continue the match right where time was called in a manner similar to the NBA.

“We want to make the most interesting stories come to play, and we believe that by giving coaches this ability it gives teams better gameplay while giving us some in-game stories to talk about as part of the broadcast,” Vartanian says.

Another new feature is live listen-ins where team audio will be recorded and played during the broadcast. Winning moments, in particular, will add personality to the games, says Cole — though he acknowledges that the mics might pick up some conversations that shouldn’t be broadcast. “We are wary of what we may hear in the team mic mix,” he says, “and we talk to the players about what they’re going to say on broadcast.”

The biggest storytelling tool at the team’s disposal is CODCaster, a multichannel broadcasting system built by Infinity Ward and Beenox to present every match from as many angles as possible. Run by a behind-the-scenes team, CODCaster tracks every camera angle, every statistic and even the look of the in-game soldiers.

An important task of the CODCaster team is finding the right camera angles for situations that arise on the fly, like a tense standoff between two opposing players or a major skirmish. “This game is fast,” says Jay Puryear, director of brand development at Treyarch. “If you’re just seeing cuts of first-person perspectives, it’s awfully hard to tell a story.”

One CODCaster feature new to the 2020 season is what’s called a “uniform override,” where a character onscreen will have a skin sporting the team colors that will only be visible to those watching the broadcast.

The CODCaster will serve the built-in Call of Duty fan base, but is equally important in introducing esports to a non-gaming audience, which has historically found the gameplay challenging to watch. “When I first got into esports my wife would come with me to events and say, ‘I can’t watch that,’” Emminger admits. But he’s confident that the league — with its team of veteran esports, traditional sports and TV broadcasting executives — can learn from those mistakes. “Legacy esports is really point-of-view switching, very hard to follow unless you’re a hardcore player, but adding the freecam view to set up a field of play and an establishing shot helps so much and allows more people to understand.”