In late November, after he was named People‘s sexiest man alive, Michael B. Jordan announced during an appearance on Jimmy Kimmel Live! that his next move was to “use my body for good” by joining subscription social media site OnlyFans and donating all the proceeds to charity.

The 4-year-old service is best known for proffering racy to pornographic content from adult entertainers for a small monthly fee, so naturally the proclamation generated headlines. Though it appears Jordan was only joking — as of press time, he had yet to create an account — it was a fitting cap to a big year for OnlyFans that included Beyoncé name-checking the company in a verse on the remix of Megan Thee Stallion’s “Savage” in April. “That was a pretty frantic morning in the office,” says OnlyFans founder and CEO Tim Stokely. “My phone was just going off the hook.”

Entertainers of all stripes who’ve been cut off from normal moneymaking opportunities like live events and in-person shoots have turned to the service. Cardi B, Tyga, Austin Mahone, Teen Wolf actor Tyler Posey and Real Housewives of New York City stars Dorinda Medley and Sonja Morgan are just a handful of the talent who have created OnlyFans accounts in the past year, offering up exclusive (largely SFW) content to people willing to pay for a monthly subscription to their feed.

According to Stokely, OnlyFans has grown from five creators when it launched in 2016 to more than 1 million today, over 100 of whom make at least $1 million annually on the platform. Since May, its audience has jumped from 30 million users to 85 million users.

“Talent from all walks of life are looking to generate revenue outside of what they traditionally were doing,” says Tony Minter, head of talent at OnlyFans agency Behave, which helps creators optimize income from the platform. “You’ve got models, influencers, musicians, dancers, cooks — we’re having conversations with everyone about how they can get on OnlyFans and monetize.” 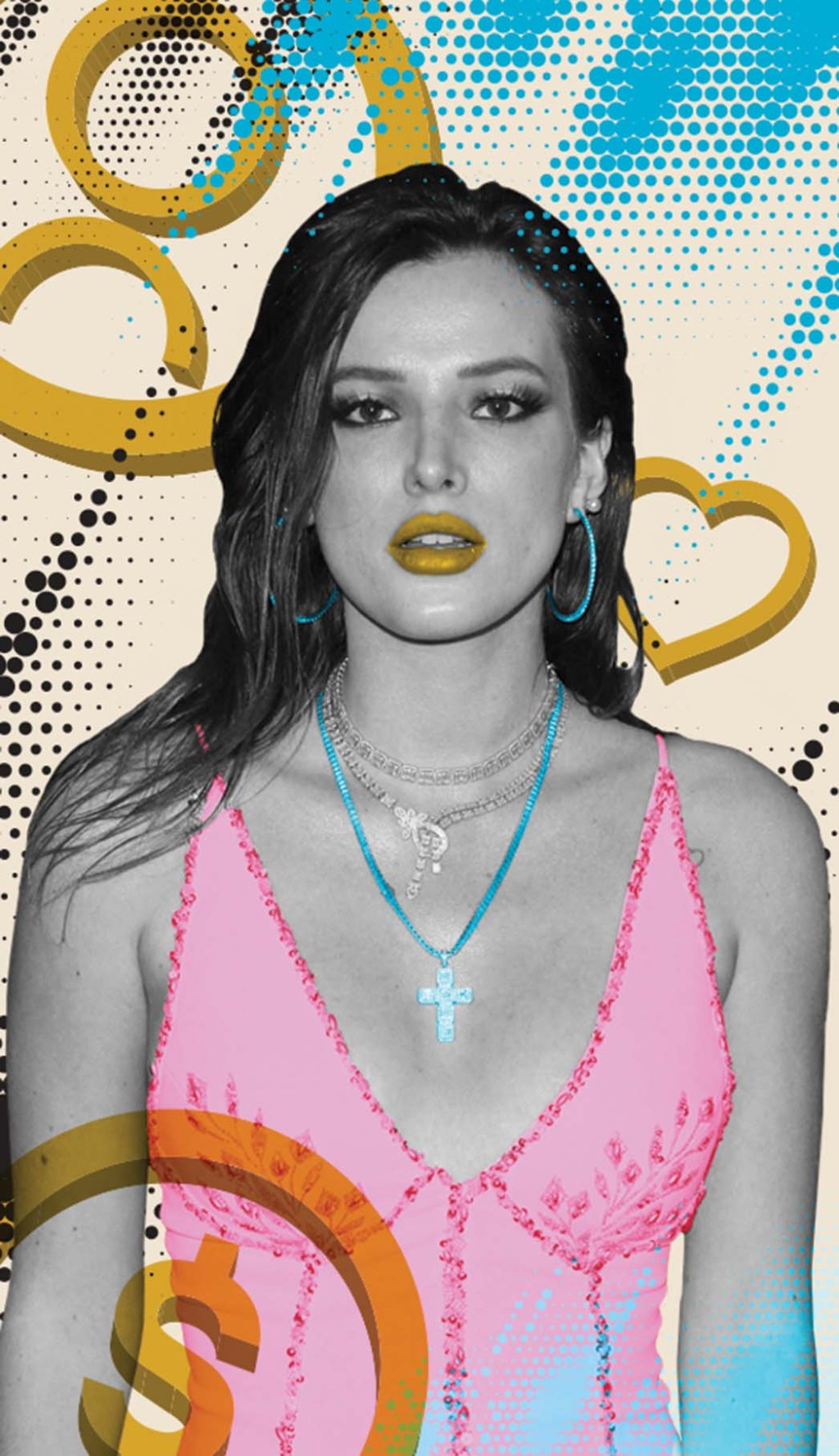 OnlyFans is part of a cadre of subscription-based products — companies like Patreon for content creators and newsletter service Substack — that have risen in popularity as talent, emboldened by the power of having direct connections to their fans on social media platforms like YouTube and Instagram, look for ways to create more consistent revenue streams that don’t rely on restrictive and often elusive contracts with brands or media institutions.

Of all these companies, OnlyFans operates most like a traditional social network, though it is only available via the web and not a mobile app. A creator’s feed of photos and videos looks a lot like Instagram, with one key difference: A user has to subscribe to see the content. Most creators’ subscriptions run $5 to $10 per month, but many offer discounts to people who pay for several months up front. Once behind the paywall, a user can like and comment on the posts. They can also send direct messages to the creator and, if they want to show extra support, send tips (the minimum is $5). Often, a user will be instructed to tip to unlock extra, even-more-exclusive posts.

Before founding London-based OnlyFans, Stokely ran a website for personalized adult entertainment called Customs4U. The enigmatic executive, who’s only recently made himself available for interviews as OnlyFans gains mainstream traction, says he wanted to build a social media platform with a payment button “so that all of these creators making this amazing content for free could get paid.” He describes the early days as a pretty standard tech startup story where he was focused on “legitimizing your brand, building that user confidence and trust, and helping creators buy into your idea and understand the earning potential.” It eventually took off with talent because it encouraged a level of interaction with fans that just wasn’t available on other social media platforms.

Though the subscription fees and tips are usually small, they can add up quickly. Bella Thorne made a reported $2 million in less than a week when she joined the service in August and charged a $20-per-month subscription fee. Earnings can vary significantly depending on the creator. A calculator on the OnlyFans website estimates that someone with 500,000 social media followers can generate monthly income between $25,000 and $1.2 million from subscriptions alone, depending on the fee charge. (The company takes a 20 percent cut of all revenue earned.)

The earning potential of OnlyFans has become particularly important for creators whose main source of income has been cut off because of the pandemic.

“I’m somebody who stresses about a lot of things,” says David Pevsner, an actor who has appeared on Silicon Valley and Modern Family. Thanks in large part to OnlyFans, where he’s been posting X-rated content for his subscribers since 2018, he says, “Right now money is not stressing me out.” Pevsner, who also has written a memoir and produced his own musical comedy feature film Musical Comedy Whore!, declines to share how much money he can make on the platform.

But money isn’t the only reason to join OnlyFans. Creators on the service say they’re more in control of their content on the platform because they can send customized messages to followers and choose who gets access to pay-per-view content. OnlyFans also feels safer than other corners of the internet because users have to pay to opt in to viewing posts and comments are hidden from public view, which dissuades trolling.

“It’s control and freedom at the same time,” explains Shea Couleé, the winner of season five of RuPaul’s Drag Race All Stars, who joined OnlyFans in July to share behind-the-scenes footage and live makeup tutorials. “It’s been really great for me to see how people really interact with content that they are excited to see. I get such personal feedback.”

For recording artist and social media star Pia Mia, OnlyFans has encouraged a different kind of relationship with her followers than she has on YouTube or Instagram. The 24-year-old — who likes to post racy content but doesn’t go fully nude — says she can spend hours a day direct messaging with her subscribers, checking in on them and sharing updates about her work. After she posted a link to her Amazon wish list, she was touched when one subscriber sent her a Chanel bag and another a travel case for her Nintendo Switch. Asked how she would describe the relationship with her OnlyFans subscribers, she has a hard time coming up with the right words. “They’re fans, they’re friends — I don’t really know how to label it,” she says, pausing for a second to consider it further. “We’re almost like a little family, I guess.”

As OnlyFans evolves from “X-rated content to exclusive content,” per one talent rep, the company will likely have to contend with some crises surrounding its identity. Thorne, for instance, angered sex workers who have relied on OnlyFans to make money during the pandemic when she revealed that she joined the platform to research a film role. She later issued a five-part Twitter apology saying she “wanted to bring attention to the site.” (It didn’t help that OnlyFans released new pricing restrictions, including lowering the cap on paid private messages to $100, around the same time, which many creators attributed to Thorne’s big payday. Stokely says the changes had long been in the works and that it was all “a complete misunderstanding.”)

Meanwhile, the Hollywood rep acknowledges that despite the growing interest, OnlyFans isn’t always an easy sell with clients. “It’s still not for everyone,” the source says, suggesting that comedians and musicians who are comfortable releasing edgier content are the best fit for the platform at its current stage. “We all know what the stigma is, and you have to address it immediately.”

Even so, Stokely has big ambitions to grow the company, which has around 350 employees and is profitable. In addition to its offices in London, Europe and the U.S., OnlyFans also has a growing presence in Asia, where he hopes to further expand its user base.

“It’s a key focus for the business as we continue to try to get the brand as global as possible,” explains Stokely, adding that the company plans to continue to offer a home for adult entertainers even as it opens its doors to more mainstream talent. “We’ve always welcomed all creators. That’s never going to change.”

The 7-year-old company gives talent the tools to create membership-based businesses where they can offer exclusive content to their biggest fans. Digital talent like The Try Guys, Hollywood stars like Issa Rae and musicians like Ben Folds all offer subscriptions through Patreon, where they charge a range of fees (from $3 to $500 per month) for early access to new content, songwriting master classes and more. Led by CEO Jack Conte, Patreon has helped its network of over 200,000 creators earn more than $2 billion in combined revenue.

Journalists and thought leaders are flocking to the 3-year-old subscription newsletter business, which offers publishing, payment and analytics tools. CEO Chris Best said earlier this year that the number of readers and writers on the platform doubled during the first three months of the pandemic. The Intercept‘s Glenn Greenwald, BuzzFeed‘s Anne Helen Petersen and The Verge‘s Casey Newton all recently left their full-time gigs for Substack, hoping that enough readers subscribe (they can do so by the month or for the full year) to fund their work.

This story first appeared in the Dec. 9 issue of The Hollywood Reporter magazine. Click here to subscribe.