Watching Mank, as it dramatized how Herman Mankiewicz forged the screenplay for the classic Citizen Kane, film editor Alan Baumgarten was struck by one passage. “Mankiewicz is talking about how he’s delivering a script that’s a watertight narrative and a destination,” says Baumgarten, who just collaborated with writer-director Aaron Sorkin on Netflix’s The Trial of the Chicago 7. “Most scripts have a destination, but I can’t say that they’re always as watertight as what Aaron delivers.”

Sorkin’s script sketches in the anti-Vietnam War fervor that surrounded the 1968 Democratic National Convention in Chicago, introduces the activists who came together to protest the war (some of whom are at odds with one another), plunges into the clash with police that resulted and then focuses on the federal government’s efforts to bring a number of those protesters to trial. “Obviously there’s a lot to figure out, but Aaron’s carefully thought through a lot of the structure and the pace, and it’s just very tight,” says the editor, who was Oscar-nominated for 2013’s American Hustle.

To crosscut between the tense courtroom drama and flashbacks of the riot, Baumgarten, taking his cues from Sorkin’s script, worked with a combination of newly shot footage, stock material and even clips from Haskell Wexler’s 1969 drama Medium Cool, which was shot on the fly amid the turbulent events surrounding the convention. 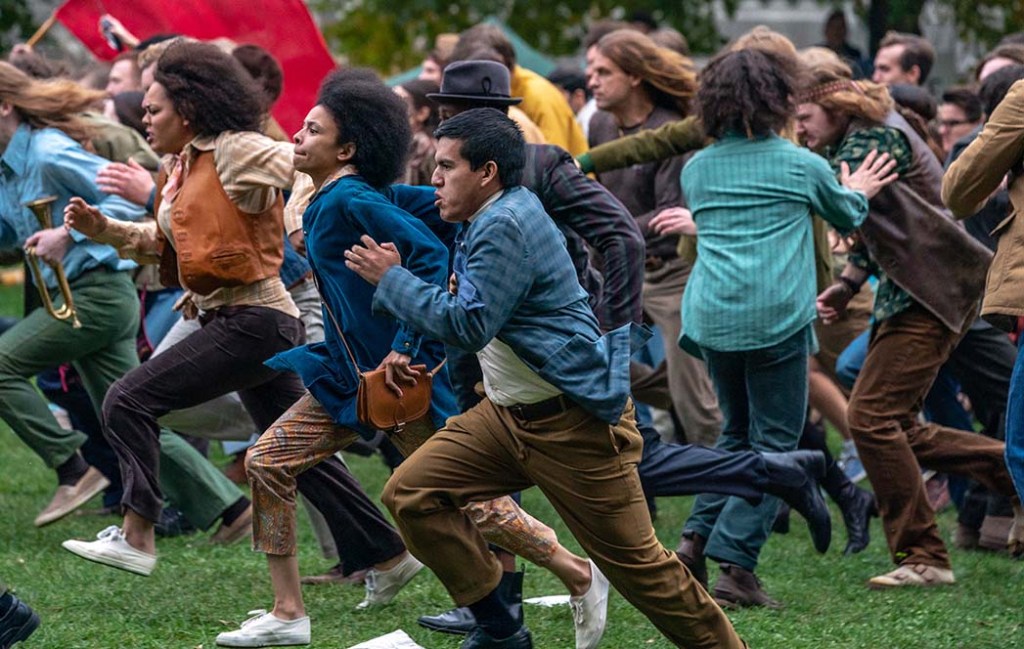 “One of the more interesting flashback sections for me is the final cross-examination, or really the mock interrogation that [defense attorney] William Kunstler [Mark Rylance] does with Tom Hayden [the co-founder of activist group Students for a Democratic Society, played by Eddie Redmayne],” Baumgarten says. “It’s a back-and-forth, heated argument between Kunstler and Hayden, and we use the entire second final riot as a walk-through, so we’re hearing setup material and then we’re showing what happened and piecing it together. Partway through that, we also introduced [additional clips with the perspective of Yippie activist] Abbie Hoffman [Sacha Baron Cohen], so that was an interesting challenge to add yet another layer in this narrative of what’s happening.”

With the film’s large cast including Yahya Abdul-Mateen II as Black Panther Party co-founder Bobby Seale, Joseph Gordon-Levitt as prosecutor Richard Schultz and Jeremy Strong as Yippie Jerry Rubin, Baumgarten took care to keep the story moving forward while keeping all the characters active. “I feel like one of the great successes of how this film unfolds is that each of the characters does have a moment, or multiple moments,” he says.

He cites as an example the appearance of Michael Keaton as former U.S. Attorney General Ramsey Clark, who was prepared to testify for the defense that Chicago Mayor Richard Daley had been more of a problem than the demonstrators. “When Clark tries to offer testimony then is not allowed to testify before the jury, it’s a great example of a character serving a story and a moment where a fully maximized dramatic moment is happening,” Baumgarten explains.

Having previously worked with Sorkin on 2017’s Molly’s Game, Baumgarten says of the director and his working method, “He loves a good debate. He believes very strongly in his ideas because he’s thought them through and he spent so much time with the script, especially in this case: It’s been around for years, and he’d refined it. But he remained open to new ideas and new ways of looking at things, so we can engage in some good spirited debate and, at the end of the day, always the best idea wins.”

Baumgarten adds of Sorkin: “He’s usually right. But he certainly will listen to the things that I might have an issue with or if I suggested an alternate way to do something. And that’s always the best kind of collaboration, with someone you trust. I have to say there’s a great trust between us.”