If 2020 and 2021 were the years Hollywood stars proved their mettle in podcasting, 2022 could be the year top influencers find their stride in audio.

A survey of U.S. listeners by Acast and Nielsen finds nearly 40 percent of respondents said they wanted podcasts from YouTubers and influencers, outranking interest in shows from music and TV personalities.

“We anticipate that this consumer desire will drive content creators who are looking to please their fans to pick up microphones and test the waters in podcasting this year,” Tommy Walters, Acast’s North America Commercial Insights Manager, said in an email to The Hollywood Reporter, noting that “smart content creators” understand the potential of podcast advertising will be able to carry their followings over to the medium.

When it comes to podcast genres, news and comedy were ranked the most popular in the Acast and Nielsen survey, with 64 percent of respondents selecting news and 61 percent selecting comedy (listeners were able to select more than one option in their responses). The interview format, where the host has a conversation with a different guest each show, was most popular among 48 percent of survey respondents, while 43 percent of respondents said they liked listening to co-hosts discuss topics with each other. 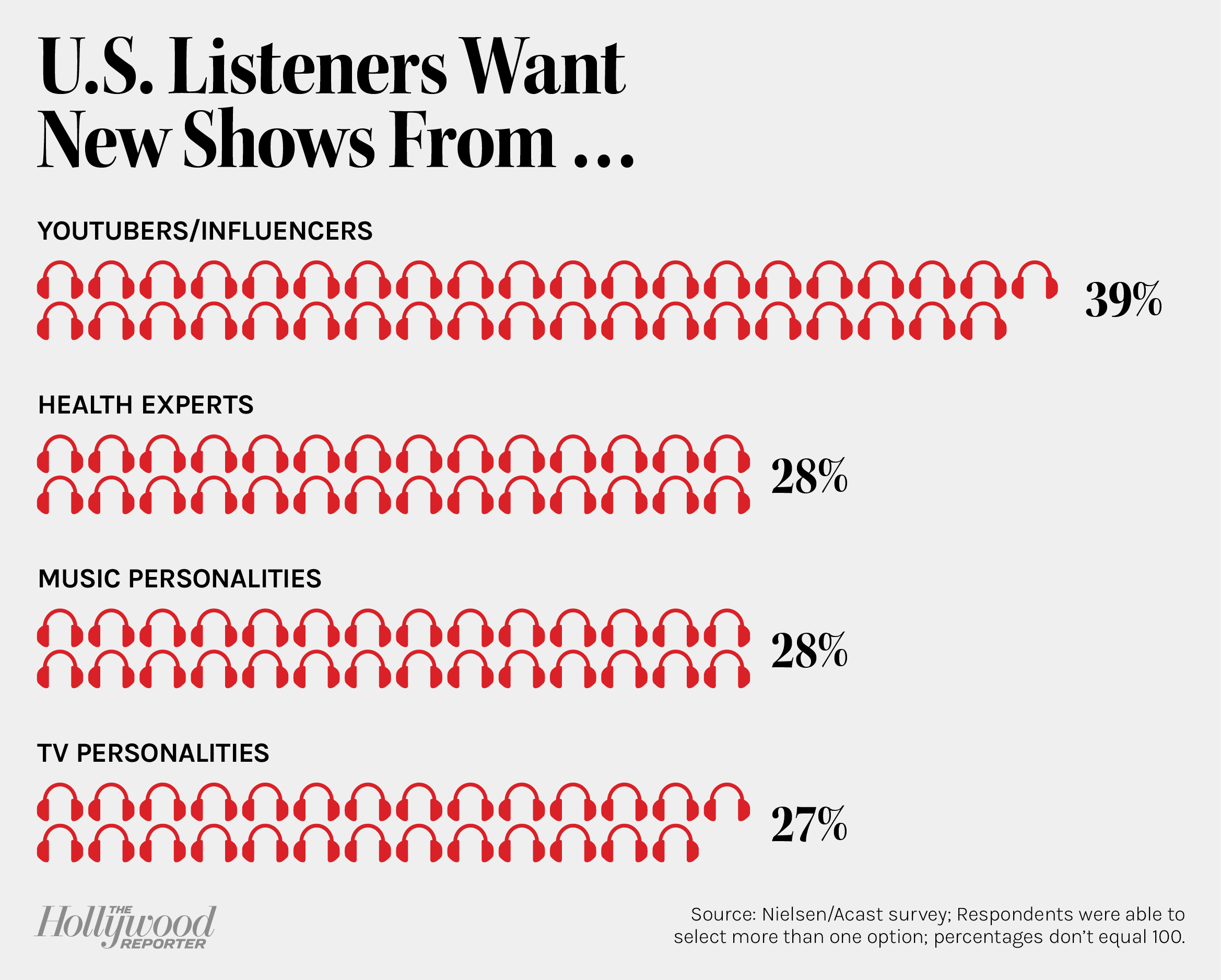 Already, TikTok stars like Addison Rae and the D’Amelio sisters have released their own shows that follow these popular formats. Rae, who signed an exclusive deal with Spotify in 2020 for a show hosted with her mom, Sheri Nicole, has interviewed guests like Kourtney Kardashian and her He’s All That co-star Tanner Buchanan on the most recent season of That Was Fun? (formerly called Mama Knows Best), while Charli and Dixie D’Amelio typically banter with one another about their lives on 2 Chix.

YouTuber turned boxer Logan Paul also has a comedy podcast that has garnered 3.5 million subscribers for its YouTube companion page, while Emma Chamberlain, who has 11.2 million YouTube subscribers and hosts the show Anything Goes, has arguably found the most success with the medium — at least when it comes to the charts. As of publication, Chamberlain’s podcast is one of the top 30 and top 10 most popular podcasts on Apple Podcasts and Spotify in the U.S., respectively.

Aside from the ability to better connect with fans and broaden their reach, podcasts are a growing source of revenue for influencers. The podcast industry is expected to hit $2 billion in advertising revenue by 2023, according to the Interactive Advertising Bureau, and companies like Spotify recently reported quarterly ad revenue of $375 million, thanks in large part to its podcast business. Having a well-known influencer read an ad can also benefit advertisers, as host-read ads on podcasts have a 71 percent recall rate compared to the 61 percent recall rate of sponsor-read ads, according to Nielsen.

Hollywood appears poised to help digital talent turn to podcasts. Networks like UTA and Cadence13’s Ramble, which are behind Chamberlain’s and the D’Amelios’ podcasts, and Studio71 have focused on launching podcasts from digital talent, even as the space becomes increasingly crowded. 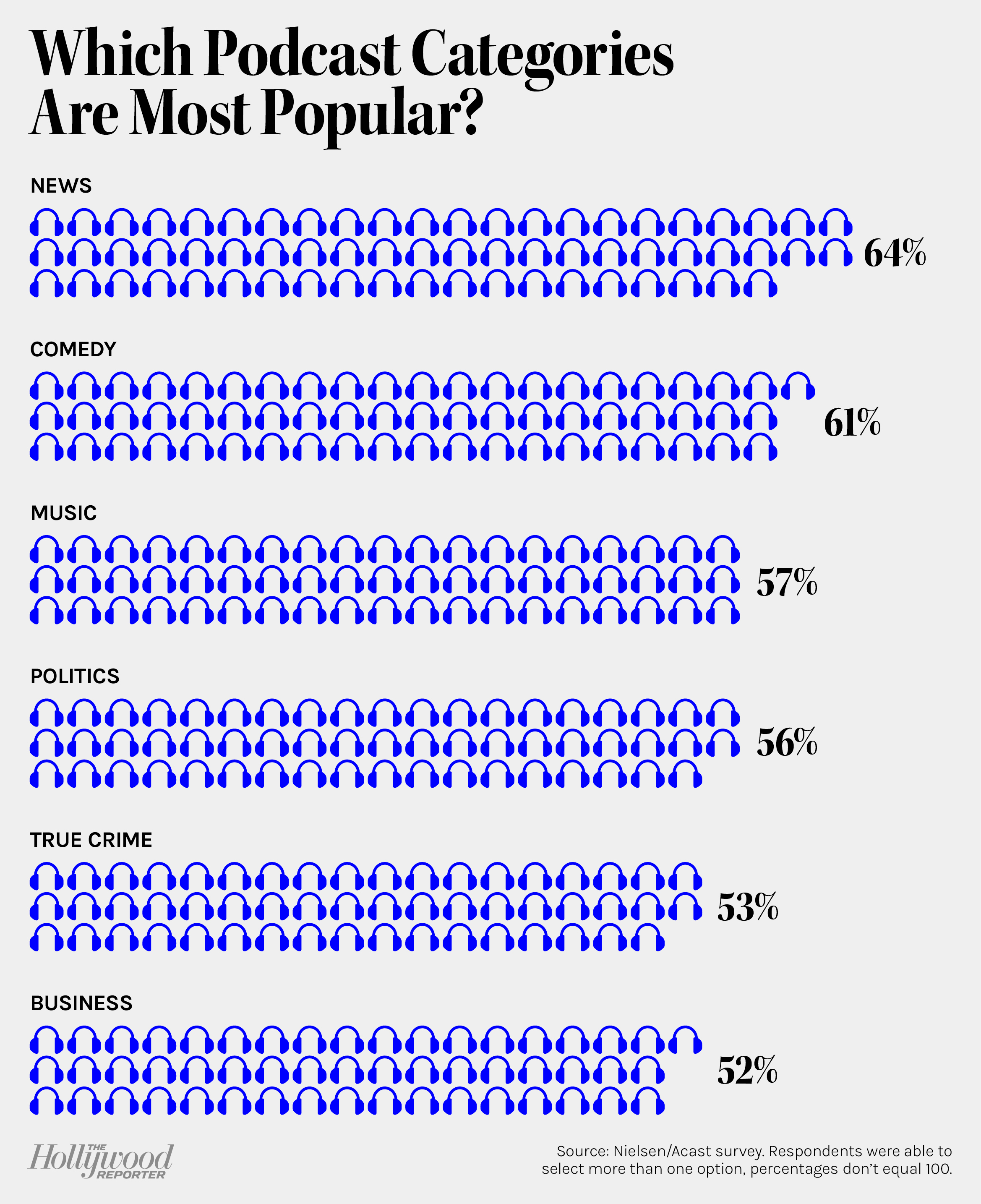