When listeners pressed play on the March 24 episode of the Wall Street Journal’s daily news podcast, The Journal., they heard something a little bit different. Instead of the usual polished intro, host Ryan Knutson was calling his co-host, Kate Linebaugh, from the closet where his wife keeps her clothes. “You know, quarantine life. Getting used to it,” he told her. “Well, I’m in my tent in the basement,” she responded.

This is the experience for many podcasters amid the coronavirus pandemic, which has shuttered the offices and studios where they normally record their shows. Amid the changes, they’re continuing to produce new programming. “The first day that we made a podcast when we were work-from-home, we did a one-day turnaround, which is fast for us,” says Linebaugh. “I think as a team, we’ve gotten a lot of energy out of that.”

The podcasters who have found ways to continue producing their shows see their work as more important than ever, whether they’re covering the impact of coronavirus or offering listeners a small escape from their current realities. “[Giving our audience] the ability to check out from the hard-core news for an hour a day, three hours a day, I believe is doing a service,” says Max Cutler, founder of Spotify-owned studio Parcast. “We’re trying to do our part as much as we can.”

With two-thirds of Americans now ordered to stay home, consumption habits have changed. While video streaming is on the rise, a report from Podtrac shows that podcast consumption is down as people spend less time commuting to and from work. Downloads of U.S. podcasts dropped 4 percent for the week ending March 29, though download growth is up 25 percent since the beginning of the year.

In a blog post on March 30, Spotify said that it has seen a decrease in people streaming from their cars but a boost in at-home streaming via smart speakers, gaming consoles and other devices. Podcasts about news and self-improvement have seen an uptick, Spotify says. And Podtrac, which says it measures “most top publishers and podcasts,” found that downloads for business-related shows were up 10 percent for the week ending March 29, when concerns about a coronavirus-related economic recession continued to mount, compared with the previous week. 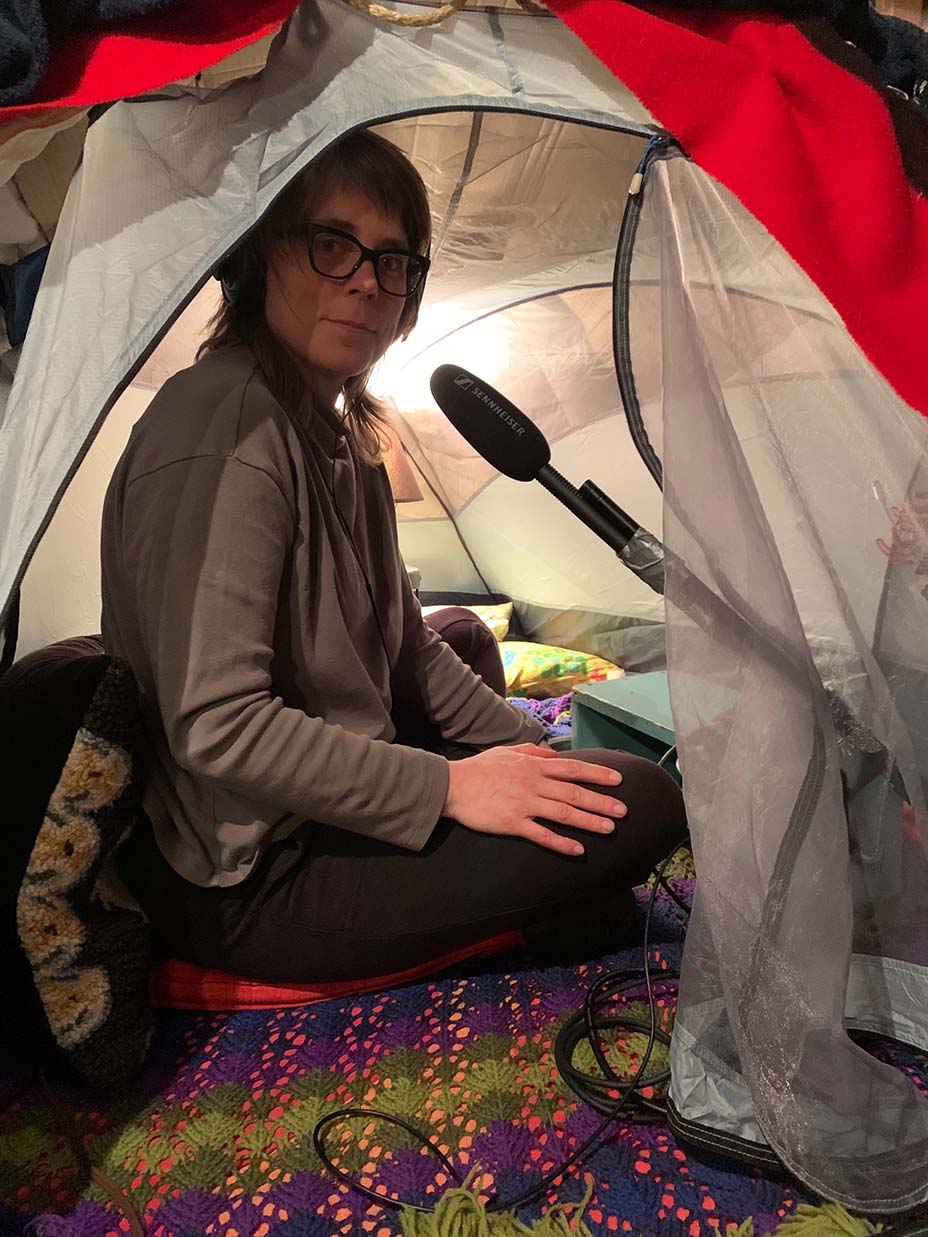 For the team behind The Journal., a podcast about money and business produced by Spotify’s Gimlet Media in collaboration with WSJ, coronavirus has become the story in recent weeks. It hasn’t produced an episode about another topic since March 11, when it explored the federal government’s investigation into the United Auto Workers. “This obviously began as a health pandemic but very quickly, as the shutdown began, it became clear to everyone that this is an economic crisis as well,” says Knutson, “and so we’ve tried to go bigger and be more ambitious and cover the story as deeply as we can.”

Wendy Zukerman, host of fellow Gimlet show Science Vs, has found her work similarly consumed by the coronavirus outbreak. The show, all about debunking fads and trends with scientific facts, was on a hiatus as the crisis mounted and she quickly realized that the episodes she’d been prepping for the upcoming season — on topics like probiotics and the safety of sunscreen — were no longer relevant. “I’ve never been on a news cycle, like I’m a science journalist,” she says. “It just became clear that we’d just have to change the entire season.”

Science Vs returned March 16, a few days earlier than originally scheduled, with an episode devoted to explaining the current situation to listeners. Normally, she would spend about two months preparing an episode, but that one came together in just three days.

Many hosts are finding that sticking to their normal routine is also a source of comfort for listeners. Adam Carolla, for instance, says he’s seen an uptick in downloads to The Adam Carolla Show over the last two weeks: “CNN’s ratings are up 80 percent, why shouldn’t mine be up 5 percent?”

“Everybody just kind of wants company right now,” says Reply All co-host Alex Goldman. “Everybody just wants to feel like someone out there is talking directly to them.” Typically, Goldman and co-host PJ Vogt release deeply reported stories about the internet every other week. But after people in New York, where the show is produced, were asked to stay indoors, they began taking calls from listeners live on Twitch and hosting Friday evening game nights with celebrity guests from around the country. “We thrive in moments of experimentation and necessity,” says Vogt. 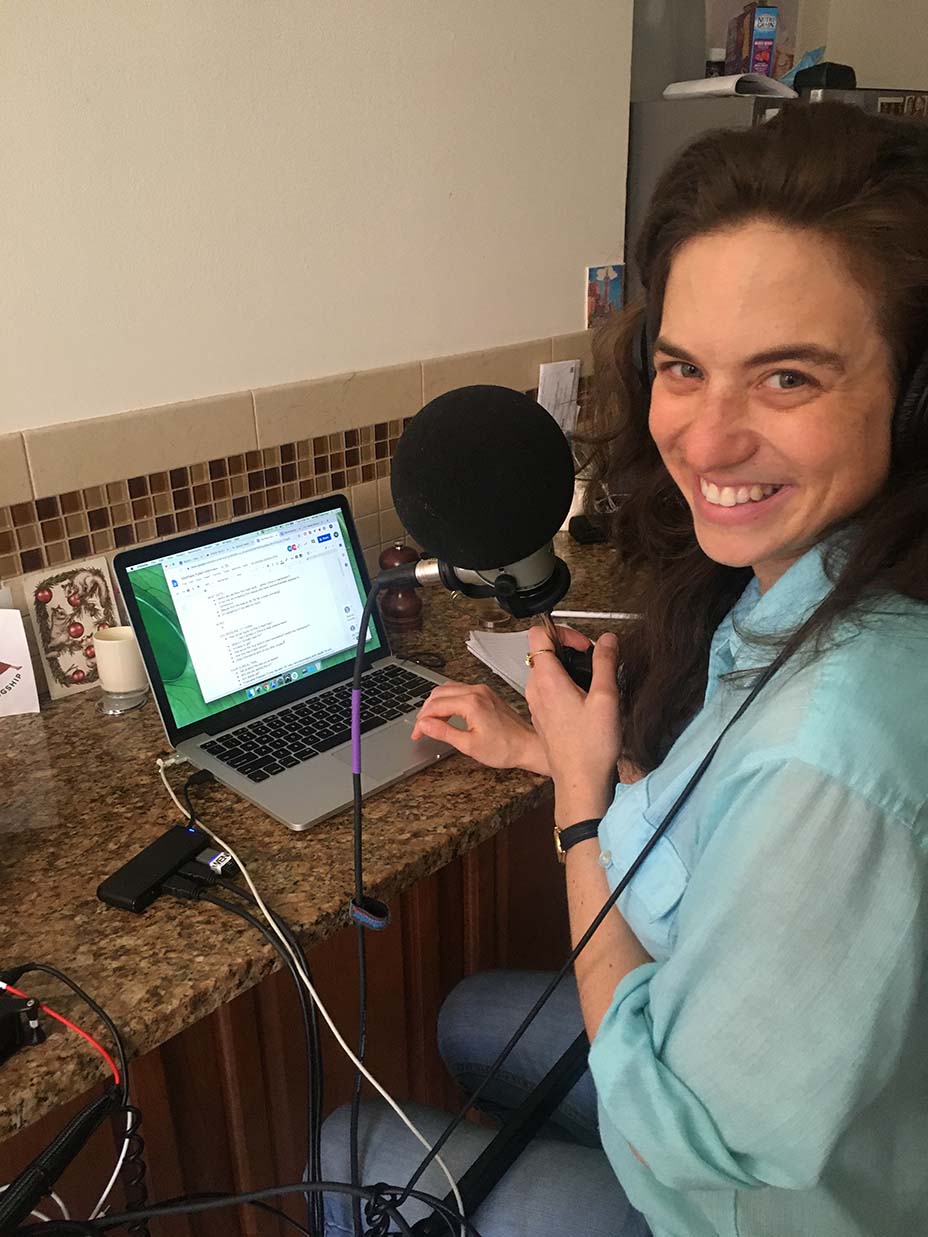 The shift to work-from-home has forced nearly all podcasters to get creative. Many have switched to makeshift home studios, but not everyone has a dedicated space like Carolla (who podcasts from his sound-proofed home theater) or Goldman (who has outfitted his attic as a recording studio). That’s led to challenges muffling neighborhood noises, getting equipment set up properly and managing the expectations of families and children. Zukerman, for instance, shares a one-bedroom in New York with her partner, which means rotating whose day it is to use the desk. Moments before calling THR, the makeshift recording setup that she was using had come crashing down. “That was just a disaster,” she says with a laugh.

To ensure that technology didn’t create avoidable issues for Parcast’s shows, Cutler deployed take-home recording kits to the hosts of all its shows. Many have taken to hiding under the covers on their beds or going into closest to mimic the results of a sound-proofed studio. But one challenge that Cutler didn’t anticipate was that a few hosts still use DSL internet hookups, which led to, in one case, a host waiting two days for his audio file to upload to Dropbox. Hooking those hosts up to mobile hotspots has helped. “We’ve always been scrappy,” Cutler says. “We’ve been really fortunate; we have not missed a beat on production.”

For Dax Shepard and Monica Padman, hosts of Armchair Expert, self-isolation hasn’t caused the same disturbance. The duo continue to record from their signature attic space. (Padman is self-isolating with Shepard and his wife, Kristen Bell, and two daughters.) But the show, which features regular guest interviews with an “intimate, in-person connection,” has had to switch to video conferencing guests via Zoom. This has posed some challenges for self-declared “chronic interrupter” Shepard with online apps that lag and don’t allow multiple people to talk at once. 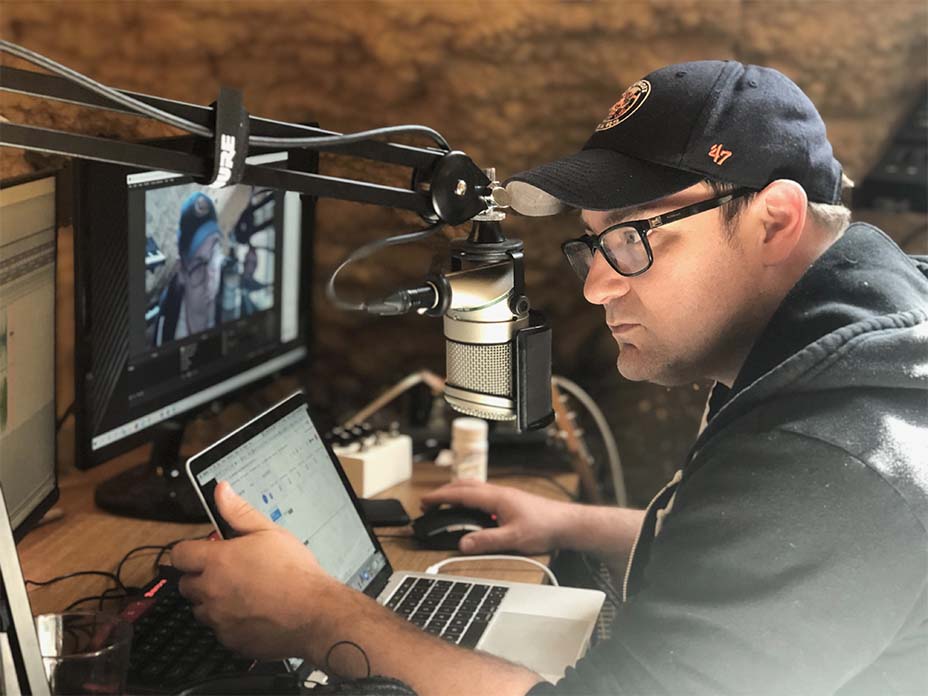 Podcasts that rely on guests and celebrity conversations have found one quarantine bright spot: it’s easier to book those interviews. “People obviously have a little more time so there’s been more availability,” says Padman, while also acknowledging that they’ve had to be more flexible to changing schedules with parents now homeschooling their children. Carolla, who typically tapes from the PodcastOne studio, concurs, “Going to a studio and driving across town, especially in L.A., is such a bear, and it’s just less of a commitment,” he says, adding that work-from-home has made video conferencing tools like Zoom more mainstream. “People can join you from their house and people have been doing a lot of it, they’re kind of used to it, and it’s not as exotic or unnatural as it was.”

After more than two weeks of self-isolation, most podcasters say they’ve adapted to their new normal. In some cases, that’s meant some pretty big shifts. The Reply All team suspended production on the stories they were working on before the coronavirus outbreak hit the U.S. and is focusing on projects that keep them in regular touch with listeners. And Zukerman has upped the frequency of Science Vs episodes to twice a week, even moving the team’s weekend schedule to Fridays and Saturdays so that they can drop new episodes on Monday mornings. “A slight benefit is there’s slightly fewer people out on Friday,” she says.

The trio behind pop culture show Ladygang — Keltie Knight, Becca Tobin and Jac Vanek — have prerecorded episodes running through April (with a disclaimer that they were recorded before social distancing rules were put into place) but when those run out, they have decided to pivot the show to focus on just the three on them and record with their significant others and parents, rather than switch to video and phone interviews with their celebrity guests.”The magic of the Ladygang is that when we do get a celebrity in with us, we really have them with us for an hour and we really connect with them, and I think that’s what makes our conversations with them so special,” Knight says. “It just wouldn’t make sense now for us to have that disconnect and start calling people up.” 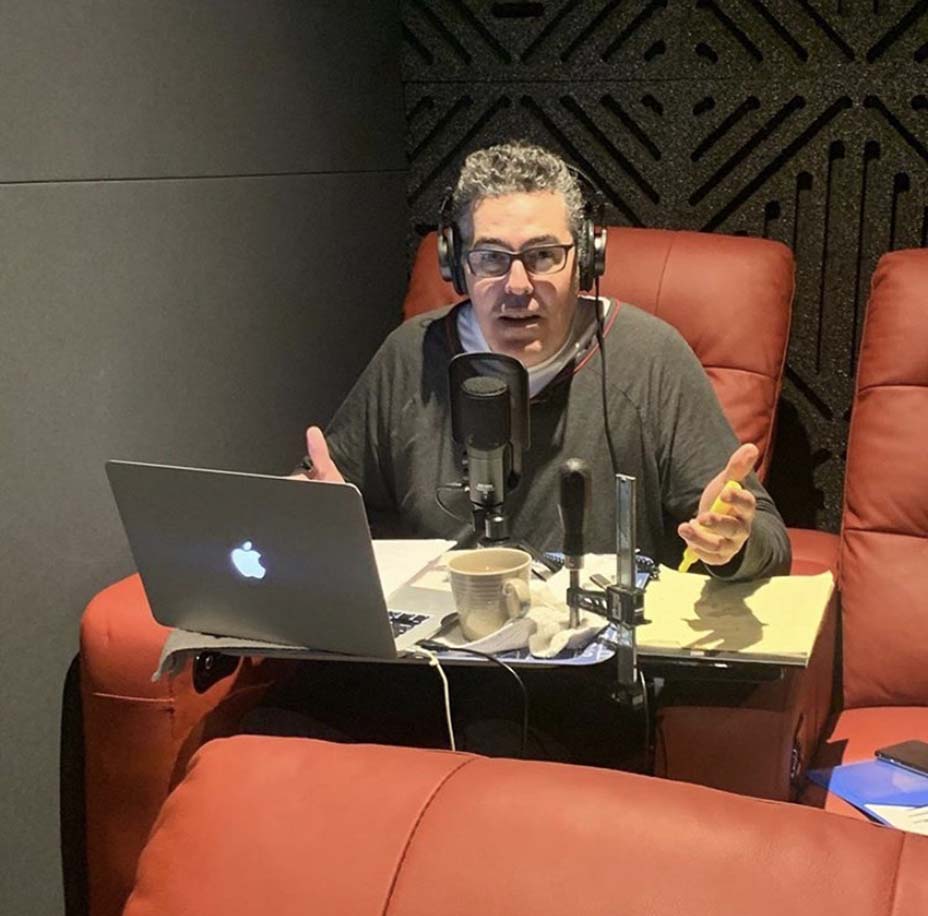 Some unknowns still remain, including how long advertisers will keep up spending amid growing concerns about the economic climate. Shepard says Armchair Expert has lost a little under 10 percent of its ad spots. Though he’s trying to make all of the show’s host-read ads quarantine related to keep things timely, some sponsors have asked not to be connected to discussion of the coronavirus.

But uncertainty has also led to invention. Podcast creation is up as more people find time to start shows from the comfort of their home, per data from Spotify-owned podcast toolkit Anchor. And the No. 1 show on Apple’s podcast charts is a new series from Brené Brown and Cadence13 called Unlocking Us.

Meanwhile, the idea for the March 24 episode of The Journal., in which Knutson and Linebaugh call each other from home and then take questions from listeners, was born out of a brainstorm with Gimlet co-founder Alex Blumberg and head of programming Caitlin Kenney. “They talked about engaging with their listeners and finding out what their listeners wanted and we were like, ‘Oh, we should totally do that,'” says Linebaugh. “It was really amazing to hear from all different kinds of people from all over the world. I mean, somebody emailed from Harare.”