When Disney+ users logged in to the service for the first time Nov. 12, they found thousands of classic movies and television shows. But there was only one, 40-minute episode of the service’s most high-profile original series, Jon Favreau’s Star Wars-adjacent The Mandalorian.

For now, Disney plans to roll out all of the streamer’s originals on a weekly basis, showing its commitment to a legacy TV release strategy in an era when, thanks to Netflix, audiences are accustomed to having all the programming they can devour at their fingertips. “We’re just getting started, so it made sense to build our fan base with episodic content coming out once a week in a more traditional model,” Ricky Strauss, president of content and marketing for Disney+, told THR ahead of the service’s launch. “We felt that if we put everything out at once it would be harder for us to build the audience.”

Hollywood has been weighing the merits of the binge model ever since Netflix popularized it with House of Cards in 2013. But with four streaming services expected to launch by the end of 2020, the question of how to release a TV show is taking on new urgency. 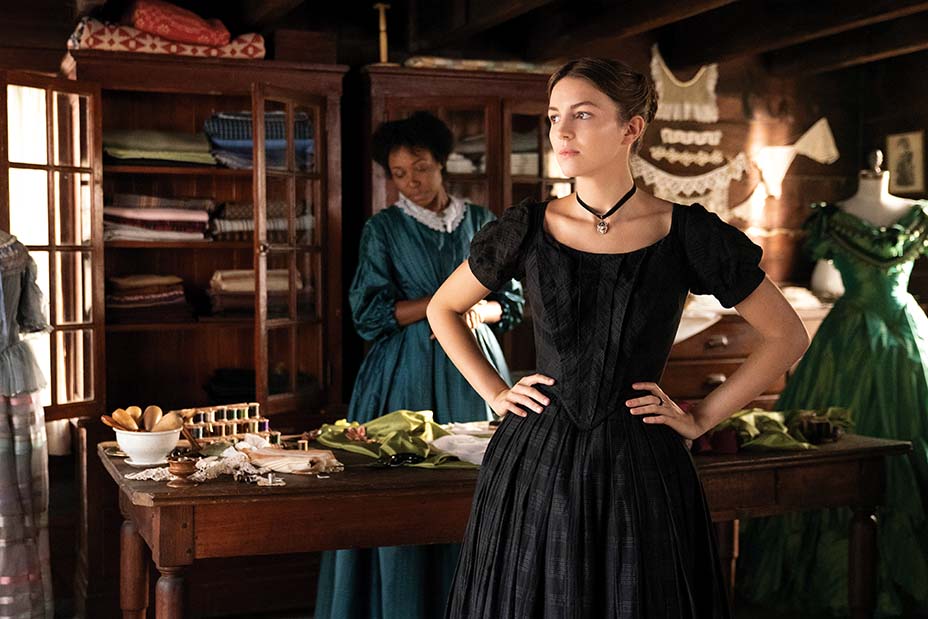 Each platform is approaching the calculation differently: Apple, which dropped its first batch of TV+ shows Nov. 1, has opted for multiple rollout strategies. It released Hailee Steinfeld period comedy Dickinson all at once but only the first three episodes of dramas The Morning Show, See and For All Mankind, which will unfold weekly. (The younger-skewing Dickinson was also the best reviewed, per Metacritic scores.)

Meanwhile, WarnerMedia’s HBO Max, per chief creative officer Kevin Reilly, is expected to offer a “weekly pulse” of original programming to keep subscribers tuned in when the service arrives in May, in line with HBO’s strategy. “We know people love to binge,” he acknowledged during WarnerMedia’s Oct. 29 investor day, “and on HBO Max, you can binge previous seasons and library content to your heart’s desire.” Amazon mostly follows the Netflix model and releases all episodes of its series at once in a bid to satisfy its Prime members.

At the heart of the debate is how best to generate and retain subscribers at a moment when consumers have more choices than ever before and can cancel services via a few easy clicks. (In November alone, some 50 new shows launched across linear and digital platforms.) For companies like Disney, WarnerMedia and NBCUniversal, which will launch direct-to-consumer offering Peacock next spring, a streaming future is one where success is more closely tied to their ability to grow subs. Adding to the pressure, both Disney and WarnerMedia have set aggressive streaming goals — as many as 90 million subscribers in their first five years.

There are several reasons why an upstart streamer might choose a weekly rollout over a binge model. For starters, a show may not be entirely in the can in time to launch all at once, as was the case with some Disney+ originals. For a new service with a smaller slate of originals, a weekly rollout also can keep audiences engaged (and paying) over time. “In part, it’s not wanting to race content onto the platform and wanting to make sure that your subscribers are sticking around,” says Julie McNamara, executive vp original content at CBS All Access, which has largely released shows weekly. Notes Pivotal entertainment analyst Jeffrey Wlodarczak, “The hope is weekly releases will help reduce subscriber churn, which for these players is likely to be quite high given the lack of switching costs.”

Plus, there’s the sought-after buzz factor. “We like creating cultural impact and nurturing maximum IP value from our IP,” Reilly explained during the investor day. “Our creators also see the difference in rolling out shows gradually and letting them breathe. HBO hits like Succession and Chernobyl became part of the zeitgeist with a weekly release schedule rather than fading quickly after a binge and burn.”

Netflix content chief Ted Sarandos has pushed back on the notion that the binge release doesn’t drive conversation. On Oct. 16, he noted that based on data from around 35 shows that release week-to-week in some markets because of licensing agreements, “we actually get more viewing and cumulatively more social media buzz — more tweets, more activity on social media — around these shows for the all-at-once model.” But he acknowledged, “It’s in a more concentrated experience, for sure.” (Social conversation around Stranger Things‘ third season was strongest on its July 4 launch day, per Nielsen.)

The all-at-once model makes sense for Netflix originals given that binge behavior is baked into the experience. It built up its early membership base by offering full catalogs of classic TV series like Friends and The Office and leaned into the notion that viewers could catch up on the previous seasons of Mad Men or Breaking Bad before a new season premiered on linear. And to great success: Its subscriber base has shot up more than 200 percent to 158 million in the past five years.

The company’s argument is that it can take time for viewers to get hooked on a show — three episodes for the first season of Orange Is the New Black, per a 2015 Netflix study. Once they do, they are likely to finish the season within a week. Netflix, which like most streamers releases only select viewership data, disclosed that 18.2 million households finished Stranger Things‘ third season within four days. (Nielsen reported that 824,000 U.S. viewers watched all eight episodes in one day.)

Though there has been some backlash to the binge — Orange Is the New Black creator Jenji Kohan told THR in 2015 that she missed “having people on the same page” — Netflix has deviated little from that release strategy. (Most of its rollout experimentation has been in the unscripted space, like with competition series Rhythm+Flow, which released its episodes in batches over two weeks.) Sarandos’ defense of the model seems to imply that bingeing makes viewers more likely to keep watching when they otherwise might have dropped off. “I’m a big fan of Succession on HBO, and I watch it every Sunday night when it comes out just like everyone else,” he said in October, adding, “I get aggravated every week waiting for the next episode.” Executives at Disney+ and HBO Max, meanwhile, are betting their shows will be strong enough to sustain the weekly cadence.

Experimentation is expected to keep up as platforms settle on a model that works best for each show. Hulu, for example, has explored several different strategies over the years, leaning early on upon its reputation as a place for next-day TV to roll out shows weekly, but more recently implementing an all-at-once release for comedies like PEN15 and Ramy. It also binge-released young-skewing Looking for Alaska because viewers weaned on streaming tend to prefer that option. CBS All Access also is exploring new models and plans to drop all but the final episode of drama Interrogation, making the finale available once a viewer has watched the other installments. “There is a bit of a gut-level conversation that goes on about what shows are better suited to which rollout,” McNamara notes. It’s unlikely that the industry will adopt a one-size-fits-all model, good news for talent like Watchmen creator Damon Lindelof, who concedes that bingeing “would be appealing to me as a subscriber but not appealing to me as a storyteller.”

Still, the new services flooding the market may ultimately be driven by the data. Among the 30-to-44 age group, for example, 53 percent of U.S. adults say they would prefer to watch all episodes at once, a THR/Morning Consult poll conducted Oct. 24-28 found. “People are used to click-and-watch-anything,” argues LightShed Partners analyst Rich Greenfield. “Bingeing is very pro-consumer and very hard to move away from.” 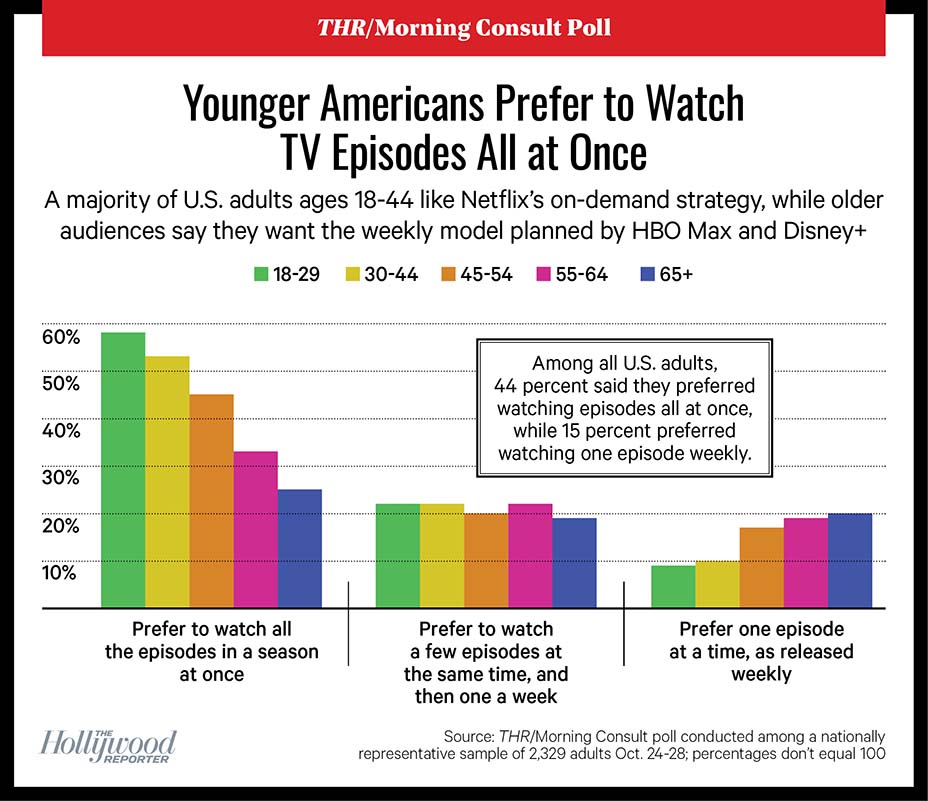 Kirsten Chuba contributed to this report.