As Paramount’s Sonic the Hedgehog races past the $200 million mark at the global box office, Hollywood is looking ahead to a number of other video game adaptations on the horizon.

From small screen offerings like Netflix’s The Witcher and Showtime’s upcoming Halo series to planned big screen blockbusters like Sony’s Uncharted and Eli Roth’s Borderlands, translating games from console to theater (home or cinema) has become the hot new trend. But which classic games do Americans most want to see get the Hollywood treatment?

Nintendo’s Super Mario Bros. and Namco’s Pac-Man top the list of desired video game adaptations, a new Hollywood Reporter/Morning Consult poll finds. The former, which is far-and-away the best-selling video game franchise in history, with more than 639 million units sold since the mushroom-gobbling titular plumber first debuted in 1981, has already been adapted multiple times in the past, most notably in the bizarre 1993 film Super Mario Bros. starring Bob Hoskins and John Leguizamo; a project that brought in only $20.9 million at the box office and had very little connection to its source material.

Meanwhile, a Mario animated film is currently in the works from Nintendo and Despicable Me studio Illumination.

The nationally representative poll, conducted from Feb. 21-23 among 2,200 U.S. adults, found that 44 percent of respondents were “very” or “somewhat” interested in a new Mario film, the most of any other game franchise on the survey. Pac-Man and Mario Kart tied for the No. 2 spot with 37 percent of respondents notching the “very” or “somewhat” interested votes.

In all three cases, interest between female and male correspondents were nearly even, while African Americans were the most likely to mark “very interested” for Mario Bros., Pac-Man and Mario Kart (more than 34 percent in each case).

“There’s a strong consumer appetite for film adaptations from video games, which spells good news for studios looking to tap into the billion-dollar gaming industry,” Tyler Sinclair, Morning Consult’s vp, tells The Hollywood Reporter. “Among both the general public and more dedicated gamers, our polling shows live-action movie adaptations most in demand include Super Mario Brothers, Pac-Man and Mario Kart.”

Other game franchises that garnered the most interest for adaptation were Nintendo and Rare’s Donkey Kong (36 percent “very” or “somewhat” interested); Rockstar’s Grand Theft Auto (34 percent), Activision Blizzard’s Call of Duty (32 percent), which currently has a film in the works; Nintendo’s Legend of Zelda (31 percent) and Super Smash Bros. (28 percent); puzzle game Tetris (28 percent), which has also had a film adaptation in the works since 2016; Microsoft’s Halo (26 percent); and Square Enix’s Final Fantasy (24 percent). 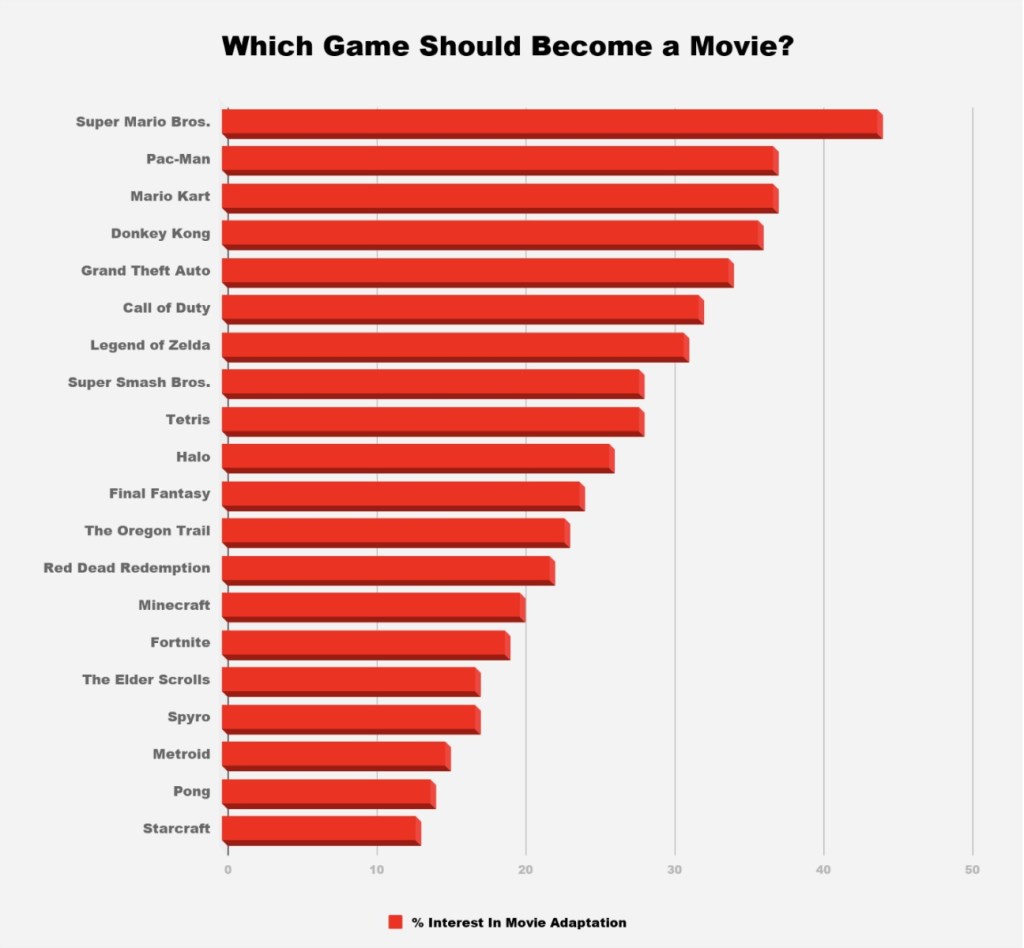