As the furor over Dave Chappelle’s Netflix special The Closer — widely criticized as transphobic — roils the industry weeks after its Oct. 5 premiere, the town’s opinions remain mixed on Netflix chief Ted Sarandos’ insensitive but forcefully artist-first handling of the situation.

While a number of LGBTQ+ stars and allies took to Twitter to voice solidarity with Netflix trans staffers’ Oct. 20 protest — Elliot Page, Jonathan Van Ness, Wanda Sykes, Ava DuVernay, Billy Eichner, Lilly Wachowski and Dan Levy, among them — just as notable were the Hollywood thought leaders, several of who have rich deals with the streamer and remained silent throughout the controversy.

As one top publicist says of their high-profile writer-producer client: “I don’t think he would ever support limiting the rights of an artist to speak his mind.” Still, Sarandos’ two tin-eared internal memos on the subject — which he later admitted to having “screwed up” — may have caused some irrevocable damage to the “Netflix culture of fear,” as one producer who’s worked with the streamer puts it.

“They kept people silent for so long, and now that spell seems to be broken and they have no clue how to deal,” says the producer of recent internal leaks. (One of those leaks resulted in the firing of B. Pagels-Minor, leader of the company’s trans resource group who allegedly shared viewer metrics with the media. “I’m here today because I’m free,” Pagels-Minor told reporters at the protest. “I actually get to talk to you about what’s going on.”)

It was not as if Sarandos could not have anticipated the backlash to The Closer; several of Chappelle’s previous comedy specials tread similar territory and drew condemnation. Cindy Holland, Netflix’s former vp original content and unofficial liaison to LGBTQ staff groups who exited the streamer in 2020 amid a Sarandos-ordered shake-up, had warned the CEO multiple times that Chappelle’s repeated zeroing in on the trans community upset LGBTQ+ staffers and could lead to trouble. “She was the liaison with that community internally, and both she and Ted met with staff employee resource groups after the last go-round,” recalls a former Netflix insider. “Those groups have distrusted Ted on their issues.”

None of that is likely to erode Chappelle’s standing at Netflix, at least not so long as Sarandos is in charge: The comedian — who throughout the controversy has denied being transphobic — is said to be his favorite working stand-up, and Chappelle has performed at Netflix Emmy parties. A spokesperson has confirmed that the streamer plans to produce more Chappelle specials.

As Sarandos himself told THR in an Oct. 19 interview, The Closer “is consistent with our comedy offering, consistent with Dave Chappelle’s comedy brand, and this is one of those times when there’s something on Netflix that you’re not going to like.” (Chappelle in turn has expressed appreciation for the support, saying in a video released Oct. 25, “Thank God for Ted Sarandos and Netflix. He’s the only one that didn’t cancel me yet,” while also agreeing to meet with the transgender community but saying he won’t be “bending to anybody’s demands.”)

But outside the insular walls of Netflix corporate culture, there exists a faction of Hollywood creatives who are quietly impressed that Sarandos was willing to “eat shit” for free speech, as the Netflix insider puts it.

It’s unclear what criticisms of the special have done to shape opinions outside Hollywood. In a THR/Morning Consult poll conducted among 2,200 U.S. adults from Oct. 19-22, some 46 percent of respondents said that they had heard “nothing at all” about Netflix’s defense of The Closer. Meanwhile, 12 percent surveyed said that they would end their subscription to a streaming service if it “decided not to remove a comedy special that has been accused of being transphobic and harmful to the LGBTQ+ community.” (About 21 percent of respondents would “consider ending my subscription” under those circumstances, the survey found.)

The Laugh Factory founder Jamie Masada was one of the few figures to offer a full-throated defense of Chappelle, in an open letter calling the protests “an attack on the independence of comedy.” Masada adds to THR: “Comedians don’t want to be chastised. The stage is their sanctuary. Who are we to tell them what to say? If you don’t want to listen, don’t listen.”

Still, even Masada admits that in comedy a line does exist and offers the example of Michael Richards’ infamous outburst during a 2006 performance at his comedy club in which the Seinfeld actor lambasted a group of Black patrons, repeatedly using the N-word. “Michael came from a place of hatred,” Masada says, justifying the comedian’s lifetime ban from The Laugh Factory. “That was no joke. A woman was crying. That’s not comedy.”

Or, as Transparent creator Joey Soloway put it at the Netflix walkout: “Where is the line? … The line is anything that makes it worse.” 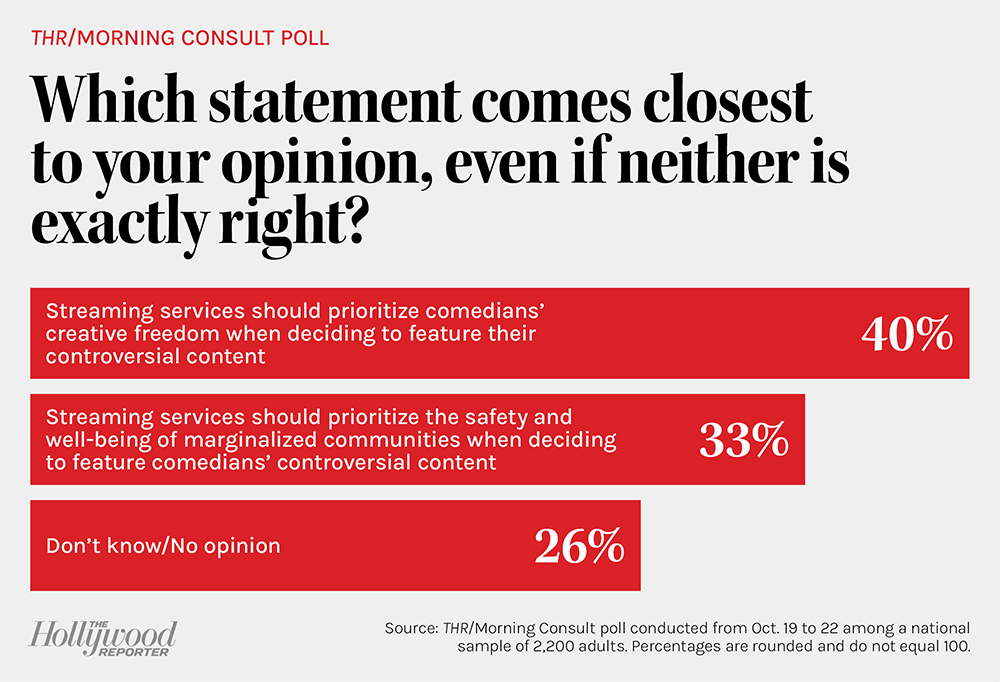 This story first appeared in the Oct. 27 issue of The Hollywood Reporter magazine. Click here to subscribe.