Inside Hulu’s Santa Monica headquarters on Thursday, executives huddled with their teams during regularly scheduled meetings to answer questions about just what it will mean that the company, once dubbed “Clown Co.” for its complicated traditional media-backed corporate structure, will have a majority owner for the first time in its 10 years.

Earlier that day, Disney revealed its plan to assume 21st Century Fox’s stake in the streamer as part of a $52.4 billion deal, giving it 60 percent ownership over a business with more than 12 million subscribers, Emmy-winning IP and a burgeoning live-television service. Comcast and Time Warner will remain part owners (for now), but Disney CEO Bob Iger stressed during an investor call that “managing Hulu becomes just a little bit more clear, a little bit more efficient, a little bit more effective with a controlling shareholder.”

With at least 12 months before a deal is finalized, several big questions loom about what’s in store for the Hulu business.

Will Comcast keep its ownership stake?

NBCUniversal gave up its Hulu board seats after it was acquired by Comcast in 2011, but those antitrust restrictions expire next fall and the telecom giant is likely none too pleased about losing out on its opportunity to buy Hulu outright. Sources tell The Hollywood Reporter that Hulu has fielded several acquisition talks in recent years and that all of the owners have expressed interest in becoming majority shareholders. Once it becomes a more active owner, Comcast could decide to stay involved in the Hulu business as it looks for its own streaming solution — not to mention, as a voting owner, it would be able to block any fundamental changes to the business. BTIG analyst Rich Greenfield even predicts that “Disney becomes so frustrated with the joint ownership” that it sells its stake to Comcast.

How will Hulu integrate with Disney’s planned streaming services?

With Disney preparing to take ESPN and its trove of family-friendly IP over the top in the next two years, some observers have speculated that Hulu could be a helpful launch pad by providing an existing base of subscribers. But Iger appeared to shoot down predictions that Hulu would be turned into Disney’s forthcoming entertainment service — which will offer series and movies from Lucasfilm, Marvel and Pixar — when he said that Hulu could become a more adult-oriented offering that sits alongside the other two services. “They will keep the Hulu brand,” argues GBH Insights’ Daniel Ives. “But I would view some sort of cross sell between Hulu and a Disney streaming service that would be integrated into each other.”

Hulu might prove useful in helping Disney launch its streaming services, but the entertainment giant already has engineers inside BAMTech’s New York headquarters hard at work building out the technology for those OTT offerings. People inside the tech company, started as a division of MLB Advanced Media, are said to be cheering the deal because of its potential to bolster the content offerings for the forthcoming services. Plus, the two companies aren’t strangers: BAM already offers some back-end services that help power Hulu’s live television bundle.

Hulu’s $2.5 billion domestic content budget isn’t as big as the $6 billion that Netflix spends worldwide, but it is a hefty sum, especially for a company with estimated losses of more than $350 million for the first half of this year. That spending has helped the streamer burst onto the prestige TV landscape with The Handmaid’s Tale and nab exclusive rights to marquee titles like Seinfeld and Will & Grace. Iger commented that the deal would allow Disney to “greatly accelerate” the Hulu business, but one observer questions whether Disney will be able to stomach the investment needed to keep Hulu competitive in the original and exclusive programming game, especially as deep-pocketed entrants like Apple pose new threats in the streaming TV arms race.

How scared should Netflix be?

Observers viewed Disney’s decision to pull its content from Netflix as a warning shot for the streaming giant, which with 109 million subscribers worldwide and a never-ending pipeline of original programming remains streaming’s biggest target. Now, Disney has the opportunity to funnel content from its own channels, not to mention programming from Fox’s television and film studios and cable networks including FX, into Hulu, currently a distant third behind Netflix and Amazon in terms of domestic audience. Combined with a Disney streaming service full of Star Wars and Marvel titles, it becomes an even more formidable competitor, especially as Netflix begins to show signs of vulnerability with a handful of cancelations and talks of eventually reining in spending. Says Ives, “This is a huge shot in the arm to the Hulu platform.” 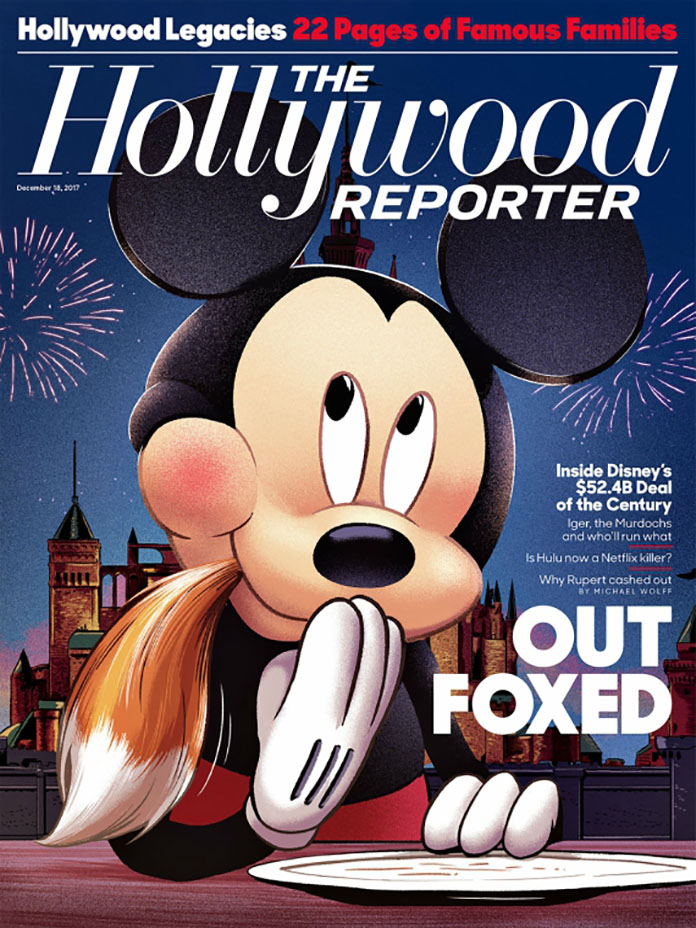