Ever since the ultra-secretive augmented reality company Magic Leap burst onto the startup scene in 2014, it has spun a web of lofty promises about an immersive new platform that mixes the real world with the synthetic. Unlike the wholly made-up environments of virtual reality, objects in augmented reality appear to exist alongside and interact with the real world. And so, envisioning a future where consumers walk around with Magic Leap headsets and giddily interact with IP in entirely new and moneymaking ways, Hollywood took the bait hard.

Magic Leap secured investment from some of the biggest names in entertainment, including Warner Bros., Management 360 and Legendary, contributing to the $2.4 billion in funding that has boosted its valuation to a sky-high $6 billion. The studios hadn’t gotten this excited about a new piece of tech since the 3D moviemaking craze of the early 2000s. Peter Jackson jumped in as an adviser. Then-Legendary CEO Thomas Tull, a onetime personal investor in the company, called what Magic Leap was building “so badass, you can’t believe it.”

Tull may have been more right than he knew. What Magic Leap boasted about achieving was highly ambitious and would, of course, take time — but endless hype, missed deadlines, leaked photos of underwhelming prototypes and an underdeveloped first-generation headset have all made one thing clear: There’s no guarantee that Hollywood’s bet on Magic Leap will pay off.

In early October, Magic Leap gathered app designers and filmmakers for its first-ever L.E.A.P. developers conference in downtown Los Angeles. Though it was the company’s first real opportunity to sell content creators on its vision for an augmented reality, CEO Rony Abovitz spoke vaguely and esoterically about plans to “build a new world with spatial computing … We are contextually aware of the space around you, we are contextually aware of you.”

Abovitz, 47, has always been an unlikely Hollywood soothsayer. A biomedical engineer, his first company developed technology that helps robotic arms better place implants during surgery. It sold for $1.65 billion in 2013. “I think he is naive; his background doesn’t speak to this,” says one source who has met with the CEO. “He’s an incredibly good promoter, but I don’t know how much they thought through the ecosystem.”

Maybe because he didn’t have to. When Abovitz first came to Hollywood looking for cash, the town was still caught up in the frenzy of virtual reality, a space that got an extra dose of interest among creators after Facebook spent $2 billion to acquire VR headset maker Oculus in 2014. Meanwhile, here was Abovitz, promising something even bolder than VR. “It felt a little bit like the gold rush to me,” says a person with knowledge of the Legendary investment. “It got superheated.” This person likens the hype to the early days of Google Glass, adding, “You have lemmings who are afraid of being left out.”

Magic Leap did nothing to help quell that hype, remaining tight-lipped about its technology and requiring all visitors to its Florida headquarters to sign strict NDAs before getting a glimpse of early technology. The agreements left many content creators scared to even disclose that they had made the trek to the Miami suburb where most of Magic Leap’s 1,500 employees work.

This August, the company finally released its Magic Leap One Creator Edition headset, aimed at professional content makers, which sells for $2,295. The device generally underwhelmed (The Washington Post called it “not even a very good parlor trick”), and users complained about its small field of vision and glitchy remote control. “This is harder than everyone thinks,” says Michael Yang, who invests in emerging technologies for Comcast Ventures. Given the unimpressive nature of early products on the market, he adds, future investors “will look at beta and accomplishments, as opposed to investing on vision and beliefs.”

Magic Leap is making no commitment to a release date for a consumer version of its headset. Company chief marketing officer Brenda Freeman says it is looking toward late 2019 or 2020, though she emphasizes that the timing is still very TBD. And while it’s fair to argue that the headsets will come down in price from the developer version and the technology will get better, there are still lingering questions about what price point could truly generate a wide audience, especially when virtual reality hasn’t hit critical mass with sub-$100 headsets on the market.

“The Magic Leap One is very expensive,” notes Manatt partner John Gatti, who leads the firm’s entertainment, sports and media litigation practice. But he argues, “As soon as they get some compelling content, Magic Leap can establish itself as a destination where consumers want to go.”

That may be true. The problem is, there is little incentive for outside companies to create compatible content. Developers currently have no way to monetize what they make, a point even Magic Leap seems to recognize.

“Our approach is a little different,” says Freeman. “Since we are at a nascent stage, we want to work with [developers] that want to invest with us based on a shared vision.” She adds that those looking to immediately monetize content are “probably not for us. This is about making sure you are part of the future and making sure the future doesn’t pass you by.”

Sure, FOMO is a powerful inducement (especially in Hollywood), and some developers are willing to make an early investment in exchange for a future payoff. “It is risky, but if you put Angry Birds on the iPhone, you were rewarded and became a big part of that platform,” says Anthony Borquez, CEO at Grab Games, the co-developer of the NBA’s Magic Leap app, which offers clips from past games. “Right now, we feel that being a great partner to the hardware companies will help establish us as a leader in the space.”

Despite some big Hollywood investments in the technology, studios may be more cautious about producing AR content, particularly after the VR market failed to quickly materialize. “Given the disappointment that came from VR, they are going to be slow to this party, and there’s good reason for it,” says one insider. “They are driven by consumers. They want to [leverage] their IP, but not without users.”

Technology rollouts have a history of getting a cool reception. HDTV, though mandated by the FCC in 1996, was not a priority for studios until enough HDTV sets were in consumer living rooms to justify the investment. This shows there can be some truth to the adage “If you build it, they will come.” But expecting content companies to show up before you even build it? Good luck.

Recognizing that, and in an attempt to kick-start the fledgling VR market, those headset makers invested in content creation themselves. As far back as 2016, Facebook CEO Mark Zuckerberg confirmed that Oculus had already spent $250 million in the developer community to produce VR content and committed another $250 million. But Magic Leap, which in 2015 tapped former Vevo CEO Rio Caraeff to lead its content efforts, has been more measured in its approach to subsidizing high-cost projects. At the developer conference, the company announced a fund for indie developers, but declined to reveal the dollar amount.

Magic Leap also previewed some early content at its conference, including Dr. Grordbort’s Invaders, an AR shooter game from Jackson’s Weta Workshop (and funded by Magic Leap) in which evil robots stage an invasion; Star Wars: Project Porg from Lucasfilm, in which an Anthony Daniels-voiced C3PO instructs the participant how to feed the birdlike creatures; and the Angry Birds FPS: First Person Slingshot game by Rovio and Resolution Games. The demos were staged in controlled, indoor environments with reliable Wi-Fi, but the promise of Magic Leap extends to citywide use that will require 5G bandwidth and latency that isn’t yet available.?

Magic Leap has struck a deal with AT&T, which has also invested an undisclosed amount in the company, that makes the telecom giant the exclusive U.S. wireless distributor and brings 5G to Magic Leap’s HQ so that more work can be done to test the devices, until 5G is more widely available. “Applications aren’t going to be stuck in rooms,” says John Gaeta, a VFX Oscar winner for The Matrix who now leads creative strategy at Magic Leap, describing a future “three to 10 years” away where 5G enables citywide use of mixed reality. “The more people are exposed to the platform in destinations, they’re more likely to demand it in their everyday life.”

Meanwhile, Magic Leap faces the growing threat of competition from technology giants Google and Apple — both of which are expected to debut AR headsets of their own in the next few years. The investments of these cash-rich companies could easily dwarf what Magic Leap has pumped into its research and development. Microsoft, meanwhile, introduced its $3,000 HoloLens headset in 2016. And though the consensus is that the Magic Leap One improves on the HoloLens experience, that upper hand may not last long. Microsoft is working on a new model with a 2019 target release date.

“Most people who are in VR or AR expect Apple to fucking crush them and eat their lunch,” says one executive in the space. Adds another, “Apple can spend $15 billion before they decide they don’t want to do this anymore. How can you compete? You can’t.” 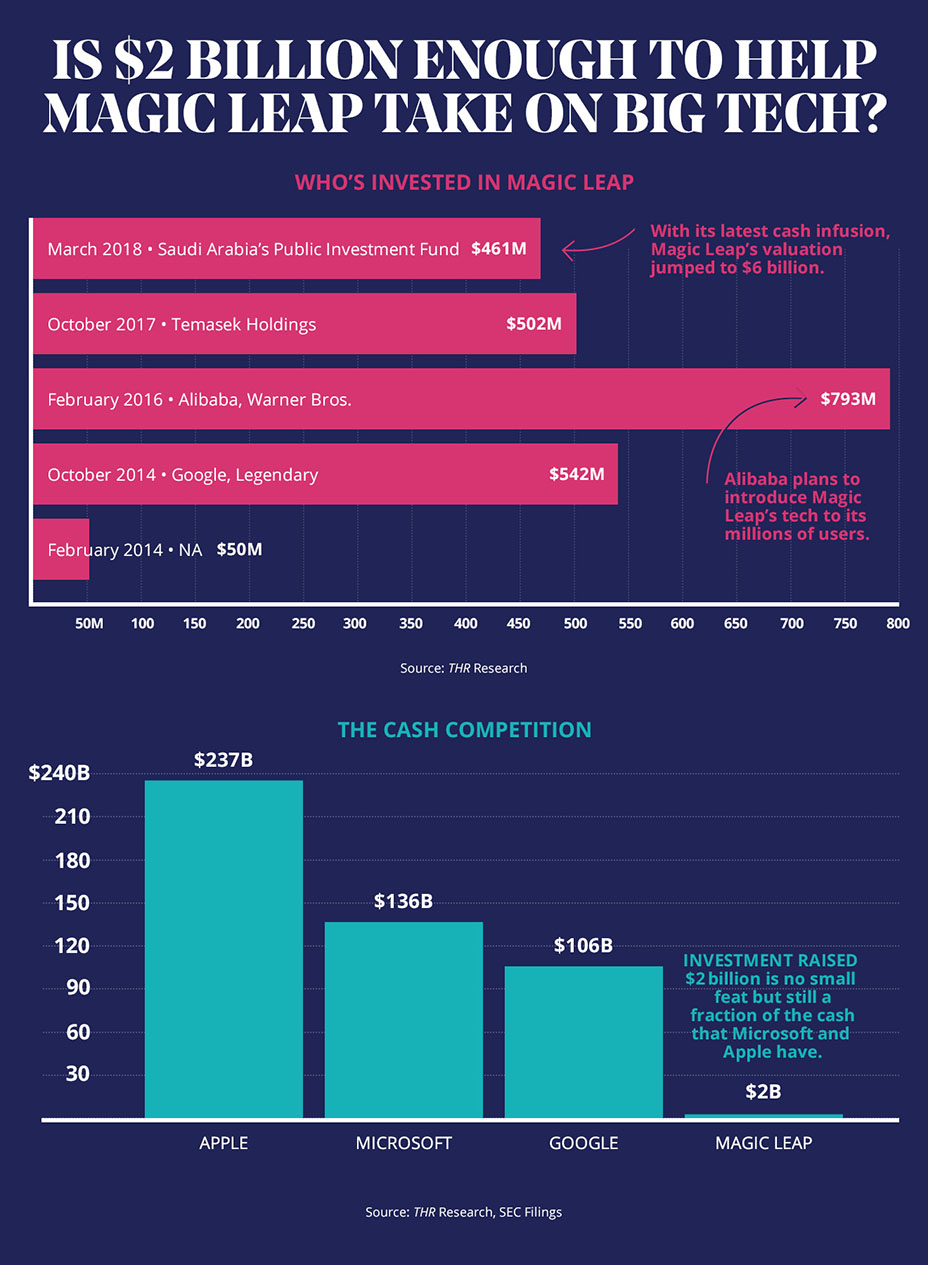