When the Streamy Awards first started handing out honors to the best videos on the internet in 2009, web series like Dr. Horrible’s Sing-Along Blog dominated the nominations. But as the YouTube creator community blossomed, the Streamys evolved with it. Today the show, with the help of producer Dick Clark Productions (which shares a parent company, Valence Media, with THR), has grown to feature more than 50 awards recognizing internet-specific categories such as live streamer and cover song.

“We made the decision after our partnership with DCP, which started for the fourth show, that we would double down on native digital talent,” says Streamys creator Drew Baldwin. “They have their own unique form of content.” For its eighth edition, the Streamys has started to look similar to a lot of Hollywood awards events — even taking place at The Beverly Hilton, home of the Golden Globes ­— while retaining much of its internet DNA: YouTube will live-stream the Oct. 22 ceremony at 6 p.m. PT, and the platform’s group The Try Guys (comprising the viral video quartet Keith Habersberger, Ned Fulmer, Zach Kornfeld and Eugene Lee Yang) are set to host.

THR talked to the first-time awards show hosts as they prepared for the big day.

What type of tone will you set for the Streamy Awards this year?

EUGENE LEE YANG We’re really trying to represent the spirit of the internet. Much of what makes the internet great, and the medium of video great, is that it combines all the different art forms in a really seamless way. We’re excited to bring all those artistic elements to the stage.

NED FULMER It is going to be a cele-bration of all the beautiful, weird and wonderful things that exist on the internet.

KEITH HABERSBERGER There will be some light roasting. I don’t think we’re going to have any controversies coming out of it.

Will you get political?

YANG We’re allowing this to be the one corner of the internet where you don’t have to hear about Donald Trump. We’re going to give people a two-hour break.

ZACH KORNFELD It’s an unfortunate reality that whenever the internet gets headlines, especially this year, it is often focusing on the things that are toxic, the things that are negative. But there is amazing work going on in online video and people doing really fantastic things. We don’t think it’s about the machismo and the fights and proving who has more cars than other people. We think it’s a place where people can see themselves represented and come together and make beautiful content that’s not seen in other places.

Who are you most looking forward to meeting at the show?

HABERSBERGER We don’t know if he is attending, however you may have seen that Will Smith started vlogging this year. He should attend and should hang out with us. Will Smith, if you’re reading this, you should come to the Streamys and I will buy you a Pizza Hut pizza. A whole pizza just for you, Will.

Can the Oscars and Emmys learn anything from the Streamys about how to attract younger audiences?

HABERSBERGER Everyone should be proud of the art they’re in. There’s a lot of self-deprecation at awards shows. We’re trying to take a little of that out of the Streamys.

KORNFELD Other awards shows could have dogs. That seems to be something that people are excited about. 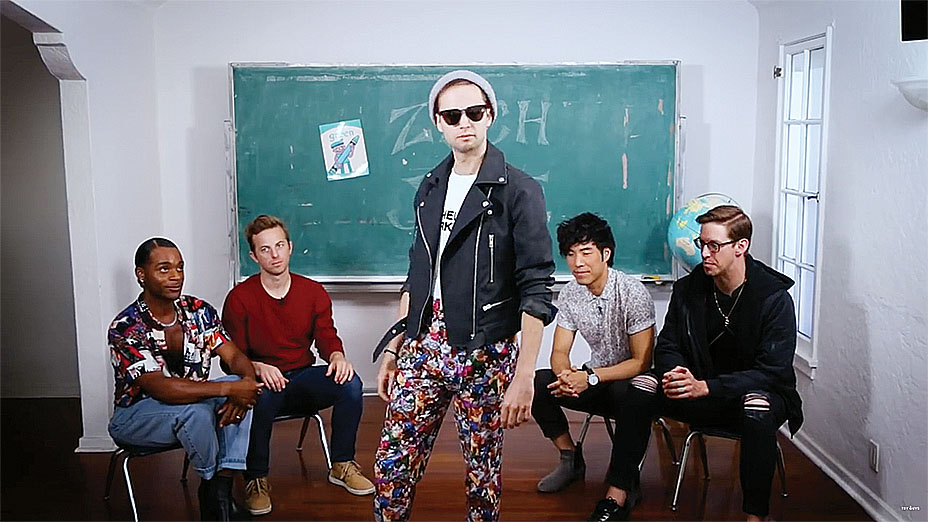 What have you been up to since you left BuzzFeed last spring?

FULMER We launched a new YouTube channel on June 15, and it grew to 3 million subscribers in just six weeks, and now we’re cruising up on 4 million. We’ve expanded our staff, we have 12 people now.

KORNFELD Even though we’re going from being part of a big company to now being independent, we didn’t want to lose any step in the quality. We’re putting out more content than we’ve ever put out.

As The Try Guys, you put yourselves in a lot of embarrassing situations, but what would you be embarrassed to have happen onstage at the Streamys?

HABERSBERGER Having my drunk husband stumble onto the stage and pee himself during our acceptance speech for artist of the year [Habersberger is jokingly referencing a scene from A Star Is Born], which we are not up for.

YANG We’re such consummate perfectionists that if we mess up something we’ve prepared, we’ll be mortified. Luckily, we’re good improvisational comedians, so I think we could pick it up.

STREAMYS GOES TO THE DOGS

Cats may have ruled the internet animal kingdom in the early days, but dogs are getting their due at the eighth annual Streamy Awards. In a first for the awards show, the Streamys plans to hand out a Dog of the Year honor to one four-legged nominee who went viral for his or her bravery. Animals up for the honor include Todd, a 6-month-old puppy who shielded his owner from a rattlesnake; Louboutina, known for giving out hugs on New York streets; and Pierre, who comforts weary LAX passengers. “Animals, and particularly dogs, have been a really big part of the internet,” says Streamys creator Drew Baldwin. “I feel like this is their year.”