High-pitched choruses of “Helloooo!” could be heard in the lobby of the 5th Avenue Theatre on Friday night. The Seattle venue had stocked its merchandise stand with mugs and T-shirts featuring the famous catchphrases of Mrs. Doubtfire‘s title character, sparking impressions among audience members there for opening night of the musical based on the beloved Robin Williams film released 26 years ago.

Ahead of Mrs. Doubtfire‘s Broadway debut next spring, the musical, directed by Jerry Zaks, is getting its out-of-town tryout at the 5th Avenue Theatre, which has been the pre-Broadway launchpad of such projects as Hairspray, Shrek the Musical and Memphis.

Mary Alice, Actress in 'Fences,' 'Sparkle' and 'The Matrix Revolutions,' Dies at 85

Kevin McCollum is producing Mrs. Doubtfire under his agreement with 20th Century Fox to adapt some of the studio’s movies into stage musicals. The three-time Tony Award winner (for Rent, Avenue Q and In the Heights) told The Hollywood Reporter he’s repeatedly drawn to stories “about finding family” and that Mrs. Doubtfire fit into that, even if it’s seemingly about a family breaking apart. When it first opened in theaters, the movie was praised for its honest portrayal of divorce.

The musical broadly follows the film’s plot, about a newly divorced father, Daniel Hillard, who disguises himself as an older woman, securing a job as a nanny so he can spend more time with his three kids. 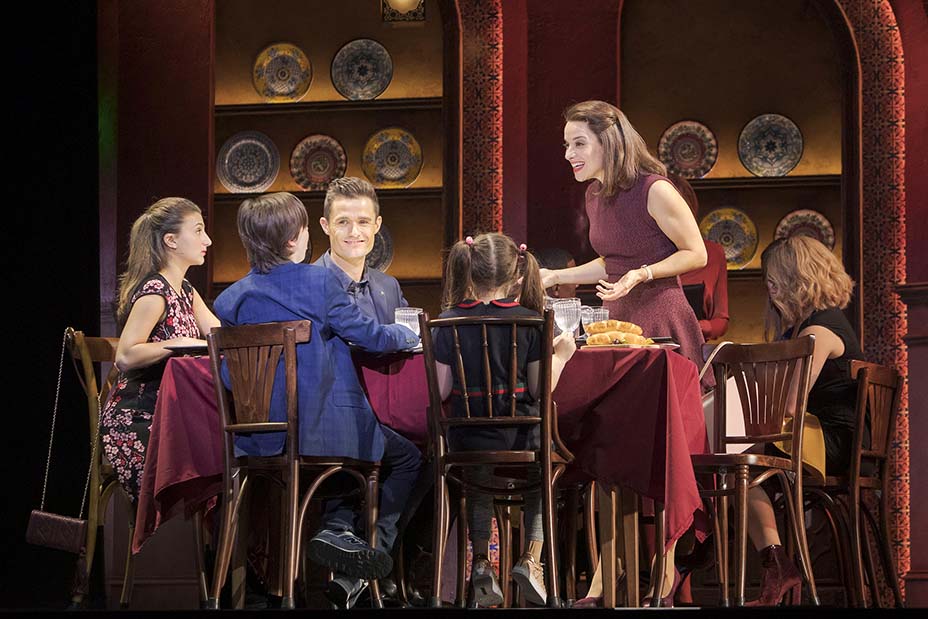 The project reunites McCollum with his Something Rotten! writing team: brothers Karey and Wayne Kirkpatrick wrote Mrs. Doubtfire‘s music and lyrics, and John O’Farrell and Karey Kirkpatrick co-authored the book.

For the lead role, they turned to Rob McClure, who had played every puppet in Avenue Q and who starred in Something Rotten! toward the end of its Broadway run and in its first national tour.

Karey Kirkpatrick said there’s a “playful, mischievous quality to [McClure] that’s instantly likable. He’s very buoyant. He is not an edgy person. He’s not sarcastic, he’s not bitter, he’s not jaded” — all attributes the writers cited as reasons McClure was the right fit, someone the audience could root for even while his character is duping his family with a big lie.

Though McClure spent time honing a Scottish accent for the role, Mrs. Doubtfire’s voice was already clear in his head, not only from having seen the movie “probably over 100 times” but also from having grown up hearing his family do impressions of his Scottish great-grandmother, who “spoke not unlike Mrs. Doubtfire. My dad’s family said that she had the sweetest little brogue,” McClure recalled.

In preparing for a role popularized by the iconic and much-mourned Williams, McClure found the process similar to the title role of Chaplin: The Musical, which earned him a Tony nomination in 2013. 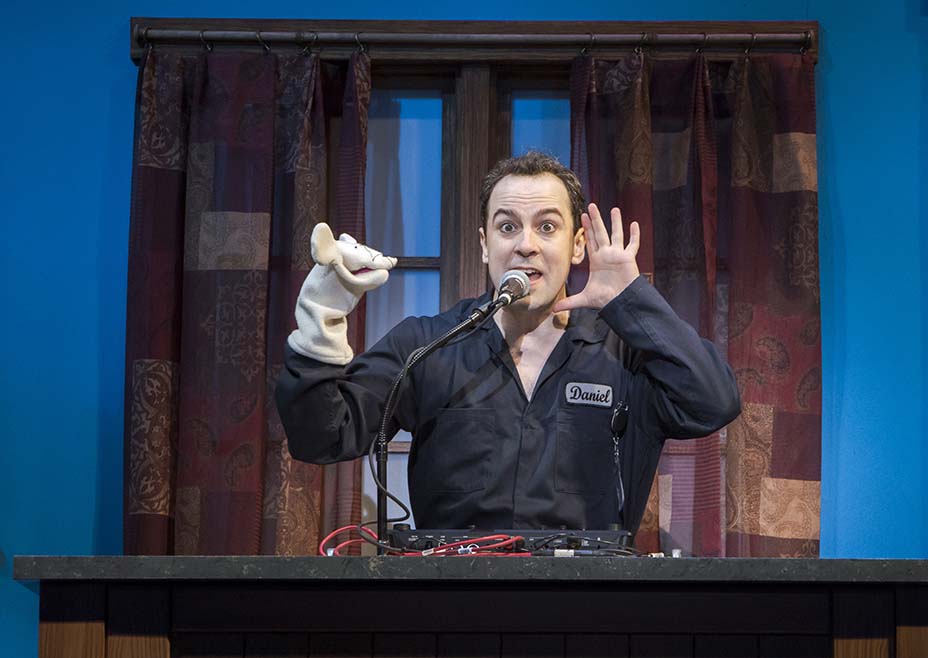 “When I played Charlie Chaplin the man, I could bring me to that. But when I play The Little Tramp with the hat and the mustache, and the cane and the shoes and the baggy pants go on, you can’t screw with that too much,” McClure told THR. “The audience has a compartment of their heart that is assigned to that thing. And they want that honored.”

On opening night, the audience cheered for memorable moments plucked right from the movie — half-disguised Daniel planting his face in a pie, Mrs. Doubtfire dancing while vacuuming. (Don’t hold your breath for that moment to be accompanied by Aerosmith’s “Dude (Looks Like a Lady),” though. The Kirkpatrick brothers wrote their own rocking tune for that scene.)

By McClure’s count as of last week, playing Daniel/Mrs. Doubtfire requires 30 costume changes per show and a prosthetic mask than can quickly be taken on and off. (He says the prosthetic design is still going through changes.) Given that Willams’ transformation into Mrs. Doubtfire called for over four hours with a makeup artist each day on set, the same process onstage needed to be considerably simplified.

“This is hands-down the hardest thing I’ve ever done, but it’s so gratifying,” McClure giddily confessed. “It’s thrilling, but it’s a workout.”

Karey Kirkpatrick said the show “very easily could be a one-man tour-de-force, but we didn’t just want to rely on that.” In the musical, characters like court liaison Wanda Sellner (Charity Angél Dawson), Daniel’s brother Frank (Brad Oscar) and Frank’s husband Andre (J. Harrison Ghee) get more time onstage than their counterparts had in in the 1993 film. 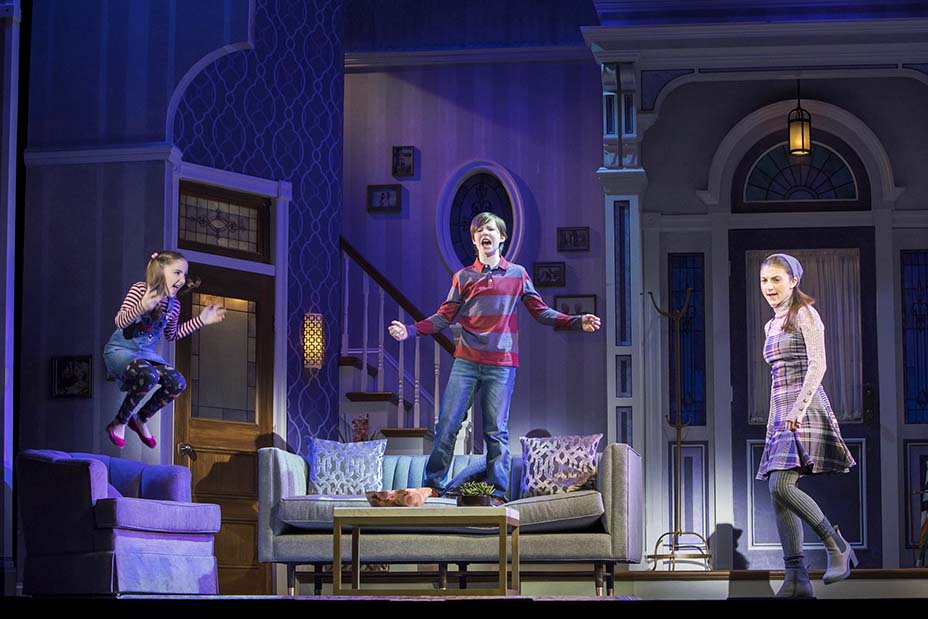 The writers were quick to note that they are three straight, cisgender white men, with parents who have been married for over 50 years. So they consulted with various friends and contacts who could speak to experiences of divorce and trans issues.

McClure pointed out that the stage production’s comedy is in “whether or not Daniel’s pulling off not being Daniel, not about a dude in a dress. Anytime the comedy seems to stem from a man in a dress — if that’s the joke, it’s not a funny one, and it shouldn’t be the comedy.”

Gone are the film’s moments that 2019 audiences would recognize as transphobic, like Daniel’s ex-wife saying “yikes” when a nanny prospect reveals she “used to be” male, or Daniel’s teenage son’s instinct to out Mrs. Doubtfire after he walks in on the nanny peeing standing up.

“When you cut all the stuff from the movie that feels dated or transphobic or homophobic, what you’re left with is this delightful farce that really focuses on family,” McClure said. “If anything, getting rid of the garbage zooms in on the heart of the piece.” 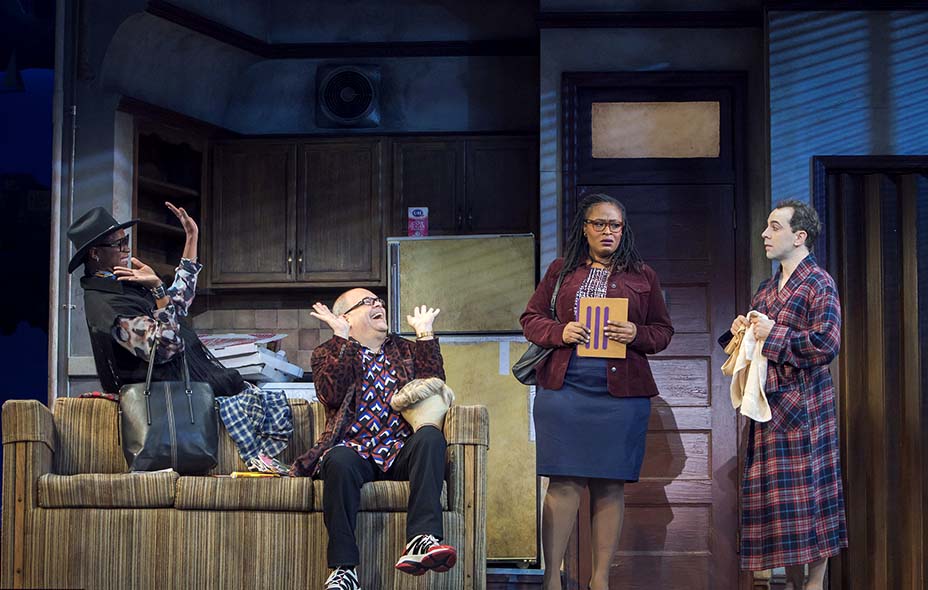 The final cut of the movie leans more into the comedy than the divorce drama, but O’Farrell and the Kirkpatricks mined some of the film’s deleted scenes to bring the story’s emotional depth to the forefront.

The writers also aimed to make their adaptation “a theatrical experience, not just put the movie onstage,” O’Farrell said. “We have seen unnamed musicals where it’s just the movie put onstage. We wanted to make it an experience for the theater and do things that you couldn’t do in film to make that worthwhile.”

Among the show’s most theatrical moments is a musical number in the second act, when Daniel wants to rid himself of the disguise, that features a dozen ensemble members in matching Mrs. Doubtfire attire performing “Thriller”-esque dance moves as Dawson belts out, “You created a monster.” That song and “Make Me a Woman,” a disco-accented number depicting Daniel’s first transformation into Mrs. Doubtfire, were met with especially enthusiastic cheers on opening night.