A warning to all Falsettos ticket holders: Bring tissues.

Lincoln Center Theater’s Broadway revival of the relationships musical — starring Andrew Rannells, Christian Borle and Stephanie J. Block as a “tight-knit family” in the early ‘80s through the AIDS crisis years — is a notorious tearjerker. At Thursday’s opening-night performance, Steven Boyer “cried for the last half-hour of the show. I was dripping all over my suit jacket, my face was melting — it was disgusting.” Richie Jackson echoed at the afterparty, “It ended an hour ago and I’m still just barely holding it together.”

From onstage, the cast can’t see the faces of weeping attendees, but they can definitely hear the chorus of inhales and sniffles. “I’m a shallow actor, but this material is so good that I get there,” Borle, whose eyes are always wet by the final number of each performance, tells The Hollywood Reporter. “It’s different from hearing laughter: Laughter is collective, but crying is very private, everyone is having their own individual experience. A lot of people don’t want to cry in front of an audience. But tears let you know that people are moved, and that’s gratifying because I want people to be moved by the show.”

Block echoes of the 1992 musical, “Those sounds send chills throughout my entire body because it seems important. It’s great when musical theater can affect an audience in that way, whether it’s a Wednesday matinee and they’re Lincoln Center subscribers ranging between ages 60 and 80, or it’s a Thursday night with college kids out there. It’s been a real sense of pride to know this material is still digging at people’s bellies.”

The cast rehearsed the two acts on different days, not only to create a sensible schedule for Betsy Wolfe and Tracie Thoms, who play a lesbian couple and only appear in the second act, but also “so there would be crying days and a noncrying days throughout the week,” says choreographer Spencer Liff. Recalls Block of the early Act 2 rehearsal days, “We all got so messy — James Lapine let us be a cry fest of disgusting, ugly tears.”

Altogether, those attending an upcoming performance should allow themselves the “beautiful cathartic cry,” as described by producer Jordan Roth.

“If you’re feeling the feels, let it go,” reassures Rannells, who happily unwinds with Borle after the heavy scenes. “Christian and I pour ourselves very tall glasses of bourbon or rye.”

Falsettos runs through Jan. 8 at the Walter Kerr Theatre. 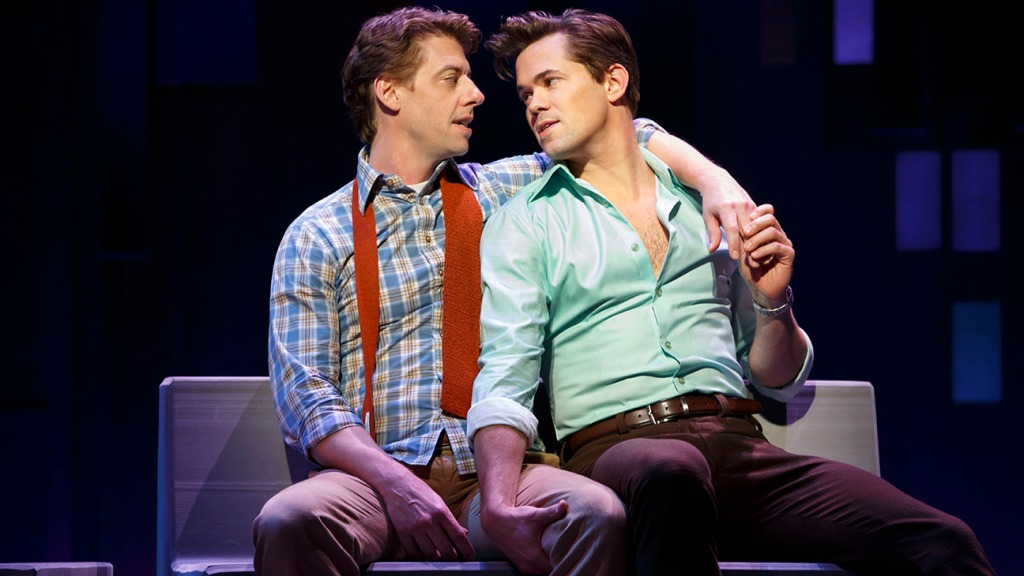