Continue to The Hollywood Reporter SKIP AD
You will be redirected back to your article in seconds
Skip to main content
June 13, 2019 4:50pm
Logo text

Annapurna Interactive reserved a booth at the E3 convention to offer gamers — those who could still function after two days of gaming and sensory overload — a chance to try out Telling Lies, the new title from Her Story creator Sam Barlow.

Another story-based game for mobile and PC platforms, Telling Lies throws players deep into the narrative where they are tasked with figuring out the connection between the main four characters, played by Logan Marshall-Green, Alexandra Shipp, Kerry Bishé and Angela Sarafyan. Barlow developed the script, which ran over 240 pages, with Mr. Robot screenwriter Amelia Gray, taking everything he learned on Her Story and going further into a fully-fledged immersive story experience.

The Hollywood Reporter sat down with Barlow to learn about the unique and exquisitely detailed story structure and gameplay mechanics, as well as his inspiration for entering the gaming business in the first place.

How did Her Story set the scene for this game to emerge?

Her Story was, after having worked for 10-plus years with publishers, me saying ‘I’m going to make something independent, and it might be the last one I make if it doesn’t work, so I’m going to do everything I wasn’t allowed to do when I was making traditional video games.’ It was an attempt to throw out a lot of established rules. I’ve made a few heavily narrative video games; Silent Hill, I knew how those games worked and how things like Gone Home [played out]; you’d have big 3D environments that were atmospheric and evocative of the story, but the actual core storytelling was done by audio logs or diaries sprinkled around. I was thinking, what about Gone Home is actually making me feel? It’s listening to performance pieces where I can hear the character talk and hear their diary, so the question I tried to ask with Her Story was, what if I took all that exploration of a 3D space, all the unlocking of doors and having giant mastery over level design, what if I applied that directly to the story? And then, often times in video games, you’ll have the immersive gameplay and then you’ll have the story, and if the pacing is right that immersion carries over to the story, and with Her Story I managed to find this formula that really gave you that level of immersion and involvement without separating those elements.

How does Telling Lies draw in the player at the top of the story?

At the very start, you see a woman rushing into her Brooklyn apartment late at night, she plugs in a stolen NSA hard drive, and you can choose to look around her desktop [in order] to understand that something very bad has happened, that is why this woman has stolen this database. This is a database in which they’ve secretly recorded a bunch of online conversations between our main characters, so your initial questions are, what the hell happened, who are these people, why are they connected. Once you start playing and dig into that, it leads to far more interesting questions about the specifics of the characters and their intent. The story spans about two years in their lives. 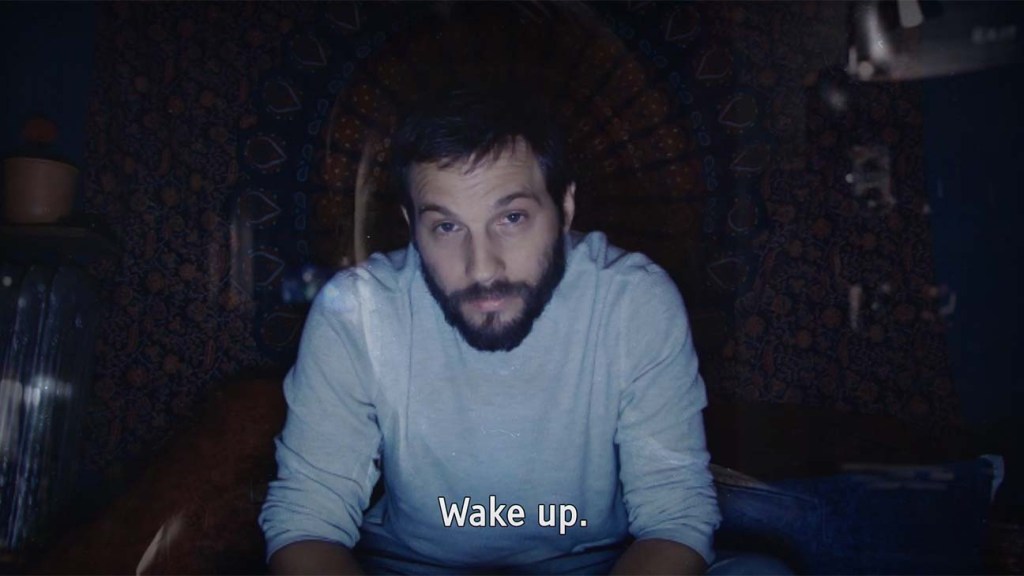 What about the script, can you talk about its development?

The script is about 240 pages, and it’s not written like a movie with characters saying A, B, C, end scene, move on; we give people room for things to unfold. There are textures that are interesting if you have the choice to choose to watch them. There was a scene in my initial mood board with Sam Taylor-Johnson where she filmed David Beckham alone in his apartment, asleep, and it was simultaneously boring because nothing was happening, but you also had questions, like, what does it mean to watch someone sleep, what does it mean for this very masculine, active human being to be unconscious? That’s not something you can stick in a conventional film or TV show. When David Lynch had someone sweep the floor for three minutes, he lost half his audience [laughs]. There’s one scene in this where Logan’s character washes the dishes for like seven minutes, and if you know what is happening in that character’s life at that point, now when you choose to watch that, you’re asking questions about how he feels about what he’s about to do. It actually becomes interesting. It’s more like theater where someone might be having their big monologue, but the other characters are there for the duration.

Walk us through the gameplay.

Mechanically what happens is you search for things; you’re prompted at the very start [to do that]. Evocatively, when you search for the word ‘love,’ it brings up these clips and you get dropped in [to a scene] where the word is used. Instantly, you’re like what’s happened here, what’s previously happened. You might get dropped in and someone is crying or angry and you’re like, how did they get to this point? Then we have a very tactile scrub mechanic, like an old editing machine, that you can just grab and rewind to find out how you got there. You can also fast-forward, and you can go into slow motion to really scrutinize what’s happening on people’s faces at key dramatic moments. There was a formality to Her Story with the interviews; everything was told through her narrating her life. Here, you’re thrown into these people’s lives and you get to see the span of the content. I really want to encourage [users] to lose themselves and follow their curiosity with the story by using the bookmarks [tool]. Because you’re driving it, there’s a sense that you self-regulate the pace of the game.

Why did you team up with Annapurna?

As a company, they are very like-minded in terms of the movies they make. In fact, this was the first time I’ve received good story notes in my whole career. They connected me with researchers and I worked with a writer, Amelia Gray, who is fantastic, she’s written for Mr. Robot and Maniac, also a novel and a series of dark short stories. One of them is about fifty ways to eat your boyfriend: a cannibalistic feminist fantasy [laughs]. But yeah, the process of digging into the world and making sure each of the characters lived a full life was surprising and exciting, especially for the actors.

Are there specific stories or games that have influenced your gaming sensibility?

When I grew up, I played all the games — even sports games, and I don’t even like sports. The ones I liked at the time had established stories, like the text adventure ones. There was one called A Mind Forever Voyaging, which is this monumental work that isn’t remembered as much, but the premise is that you were an AI in a simulation of the United States. There was a character who was essentially Ronald Reagan, and he had an economic plan for America, and this simulation was supposed to test it out. Your role in this simulation was, you’re given a checklist of things Americans do, and you would, as an AI, go and do these things and record yourself doing them — you would upload these recordings and the scientists would feed it into the simulation to unlock ten years in the future. So you can see the evolution over time; you keep moving forward in the simulation until everything goes horribly wrong and there’s a lunatic in the White House who’s implementing terrible policies. Things are getting very dystopian. What I loved about the game was that your role was to witness things — it was so different than 90 percent of the games back then when you were shooting things, jumping or racing. Also, I always come back to Nintendo games for the generosity; a game like Zelda: Breath of the Wild lasts for hundreds of hours, but at no point do you feel like your time is being wasted.

This interview was edited for length and clarity.

'Wolftenstein: Youngblood' Developer on Female Protagonists: "It's About Growing Up"