Walking into Broadway’s Circle in the Square and taking in the environmental staging of the lovingly crafted Once on This Island revival — with an upturned boat on the edge of a sandbagged pool of water, ensemble members milling barefoot around a steel-drum fire, shoes and clothing hung out to dry all over the theater, medics tending to the sick and a live goat weaving its way among the cast — the visual association hits you instantly. The vivid scene is impossible to separate from recent news footage of storm-ravaged Puerto Rico, or going further back, Haiti after the 2010 earthquake; the reference would be clear even without director Michael Arden’s program note.

The very real devastation of those and other Caribbean islands provides a moving canvas for this enchanting fairy tale with mythic elements, set in the French Antilles. Adapted from a novel by Trinidad-born author Rosa Guy, with a book and lyrics by Lynn Ahrens and a propulsive, calypso-accented score by Stephen Flaherty, this 1990 musical is a joyful hymn to community and resilience that renders even the tragedy of death as a stirring transformation that gives back to the living.

Together with his resourceful design team and cast of expressive, vocally gifted performers, Arden has approached the piece with the nurturing hand it requires — striking a balance between child-like story theater and folkloric ritual with a fantastical dash of dangerous voodoo. It’s a show about the healing power of storytelling, which makes it perfect for these grim times. Themes concerning the divisions of class, race, skin-color pigmentation and wealth also give the material timeless currency.

The musical begins with the universal motif of a child (Mia Williamson, adorable) frightened by a storm, as adults calm her with a story. The setting is an island of deep rivers surrounded by sparkling seas, known as “Jewel of the Antilles.” The dark-skinned peasants labor on one side of the land, while the moneyed, mixed-blood “grands hommes,” descended from French colonists, live in idle luxury on the other, with tall gates separating them. The peasants beseech the temperamental gods to protect them from the elements, their prayers given rousing form in the opening number, “We Dance.” 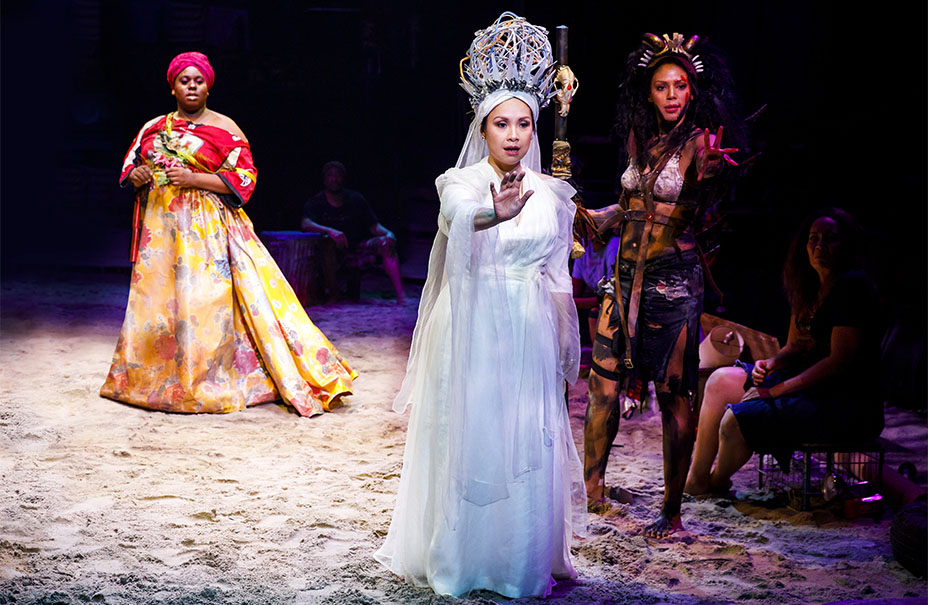 The spiritual rulers of their domain are Erzulie (Lea Salonga), benevolent goddess of love; Agwe (Quentin Earl Darrington), powerful god of water; Asaka (Alex Newell), mother of the earth; and Papa Ge (Merle Dandridge), the badass demon of death. The scrappy, hand-made quality of the production is lovely, with costumer Clint Ramos fashioning marvelous outfits for the deities out of found materials. Erzulie, clad in white, wears an imposing headdress of tangled wires that evokes religious iconography; Agwe smears his muscles with green and blue paint; Papa Ge, nontraditionally cast as a woman, has a wild mane of dreads and a harness with the razor-back of a dragon, her fins made out of Coke cans; and Asaka is a fabulous transgender diva in a ratty football jersey and floral-tablecloth skirt, throwing epic shade with a red fan.

In a similarly creative vein, the cast also augments the sounds of the five-piece band, providing percussion on “found” instruments — the kind of detritus that gets strewn about by floods and hurricanes.

At the center of the story is “One Small Girl,” saved from a fierce storm whose winds whip over the entire audience. She’s found up a tree by the aged peasant couple Euralie (Kenita R. Miller) and Julian (Philip Boykin). Putting aside the feeling that they are too old to raise children, they name her Ti Moune, or “little orphan.” In a gorgeous transition, the child (Williamson) grows into a beautiful teenager (Hailey Kilgore), who breaks the rules by falling in love with a pale-skinned aristocrat, Daniel (Isaac Powell), nursing him back from the brink of death after his car crashes on a rain-drenched road.

Arden fills in the back-story of miscegenation in Daniel’s family with the aid of a suspended canvas and some charming shadow theater in an interlude titled, La Triste Histoire des Beauxhommes. The curse on the first coffee-colored child born of a French father and an indigenous mother would forever confine all sons to the island, leaving them yearning for Europe while despising the peasants for their blackness.

When the still-recovering Daniel gets transported back to his people, Ti Moune sets out on a defiant journey to rejoin him. Having bargained away her soul to Papa Ge in exchange for sparing Daniel’s life, she refuses to comply with the island law of “two different worlds, never meant to meet.” There are echoes here of Hans Christian Andersen’s The Little Mermaid, as well as Dorothy in The Wizard of Oz, with the signature songs from each of the gods who help her recalling those of the Scarecrow, Tin Man and Lion. Darrington brings deep velvet tones to “Rain,” Salonga, in a voice of ageless purity and light, sings of “The Human Heart,” and Glee alum Newell brings down the house, belting out a fierce “Mama Will Provide.”

Ti Moune’s reunion with Daniel is one of initial dismay when he rejects the girl and her native superstitions. Elation and loving contentment follow for a short time, but only until the brutal realities of a divided world of rigid traditions reassert themselves. 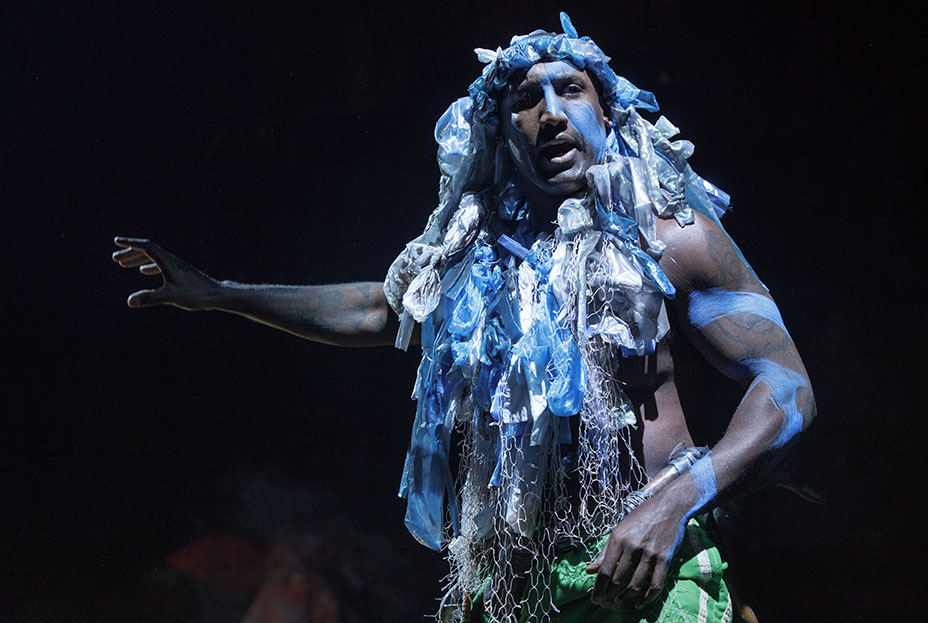 Arden and set designer Dane Laffrey, aided by the evocative lighting of Jules Fisher and Peggy Eisenhauer, conjure a world of elegance by revealing a carpet in the sand and suspending a handful of real-flame candelabras. The atmosphere is one of magic and romance, with Ramos breaking out bold colors in his opulent gowns for the women. It’s in this part of the story that choreographer Camille A. Brown’s work dazzles, as the European waltzes of the Beauxhommes give way to Ti Moune’s empowering eruption of dance with roots deep in Africa, its primal energy spreading like a virus through servants and aristocracy alike.

In the unsentimental tradition of true fairy tales, this one concludes not with a happy ending but with a transcendent and deeply affecting illustration of the ongoing flow of life and death, and the inextricable role of storytelling in that cycle. That spirit is woven throughout this production, which demonstrates an impressive leap in maturity and creative vision for actor-turned-director Arden, last on Broadway with the 2015 Spring Awakening revival. He also uses the spatial possibilities of the venue’s in-the-round staging to their full extent, frequently extending the action into the aisles. While the early scenes flirt with a whimsical quality that might easily turn cloying, the dramatic integrity of the piece prevails.

Flaherty’s melodies are firmly grounded in the Broadway musical vernacular, infused with Caribbean rhythms without veering into cultural appropriation. And Ahrens’ lyrics have that mix of wonder and plainspoken simplicity that characterizes stories handed down among generations. The composing team would go on to find greater success six years later with Ragtime, but this show remains one of their most beloved, musically uplifting creations. (They also are currently represented on Broadway with Anastasia.) The orchestrations of AnnMarie Milazzo and Michael Starobin pulse with vitality, and Flaherty’s vocal arrangements are full of glorious harmonies.

Some of the most ravishing singing comes from Miller and Boykin, heartbreaking as the adoptive parents reluctantly forced to let their cherished daughter go. Newcomer Kilgore is a delight, embodying both strength and vulnerability with a natural exuberance that never feels forced. And as the gods, Darrington, Salonga and Newell all are regal in distinctive ways, while Dandridge is devilishly seductive — Death as a feral Victoria’s Secret model. But in this superbly balanced ensemble of 20, every last member performs an essential role in telling the tale.