Talk about a match made in heaven. Kevin Kline was born to do Noel Coward, and his casting as Garry Essendine, the 1930s stage star and aging playboy at the center of his own eternal melodrama in Present Laughter, yields a performance of unimpeachable skill, made all the more delectable by its lightness of touch. Matching witty verbal jousts with florid gesticulation, and head-to-toe body language that constitutes its own uniquely refined brand of physical comedy, Kline etches a character pulled between conceited selfishness and encroaching melancholy, a coddled man-child helpless without a captive audience.

Moritz von Stuelpnagel’s production can’t entirely disguise the wheezy fatigue of the 1939 comedy, but as complications multiply and the quasi-farcical cogs click into place, it runs like clockwork. That helps correct the imbalance of an ensemble in which the seemingly effortless work of the veterans outclasses their less seasoned castmates, if never to any major detriment.

In a vehicle he wrote for himself, Coward was poking mischievous fun at the frothy commercial comedies that were his bread and butter, with their sophisticated repartee, winking sexual shenanigans, luxurious settings, silk dressing gowns and free-flowing cocktails. A character named Roland Maule (Bhavesh Patel), an unhinged aspiring playwright who stalks Garry, dismisses the preening star’s choice of stage material as “superficial, frivolous, without the slightest intellectual significance,” urging him to embrace the more psychologically complex theater of ideas. “All you do is prostitute yourself every night of your life,” sniffs Maule.

That arch knowingness in the writing finds sublime echoes in Kline’s performance, that of a consummate theater creature returning to his natural domain with obvious relish, playing an actor who is always performing, on and off the stage. The duality of Garry Essendine that Kline nails with unerring precision is that this is a man who appears to have everything — fame, money, staff and trusted friends to insulate him against mundane real-world concerns, a steady string of female admirers requiring little seduction — and yet the dissatisfactions of boredom, weariness and midlife crisis eat away at his complacency.

Even so, his vanity is rarely punctured, even when Liz (Kate Burton), the wife from whom he is amicably separated, points out his propensity for overacting. “You have now gone too far,” Garry huffs. Perhaps the finest of Kline’s many priceless moments here is when Cobie Smulders as Joanna, the glamorous wife of Garry’s producer Henry (Peter Francis James), tells him, “You are to me the most charming, infuriating, passionately attractive man I have ever known in all my life.” Without missing a beat, Kline arches one eyebrow, contemplating and fully endorsing the assessment in a silent instant that brings down the house.

Unpacked here over four scenes in two acts covering roughly 10 days, the play charts the escalating chaos Garry whips up around himself as he prepares to leave London to tour Africa with six plays in repertory. Juggling his commitments and keeping his more reckless impulses in check is his long-suffering secretary Monica, played by Kristine Nielsen, the queen of the double- and triple-take, at her hilarious best here delivering deadpan ripostes. But despite the efforts of Monica and the worldly Liz, whose condescending indulgence toward Garry can’t hide her enduring affection, he gets drawn into the messy intrigues of his inner circle. 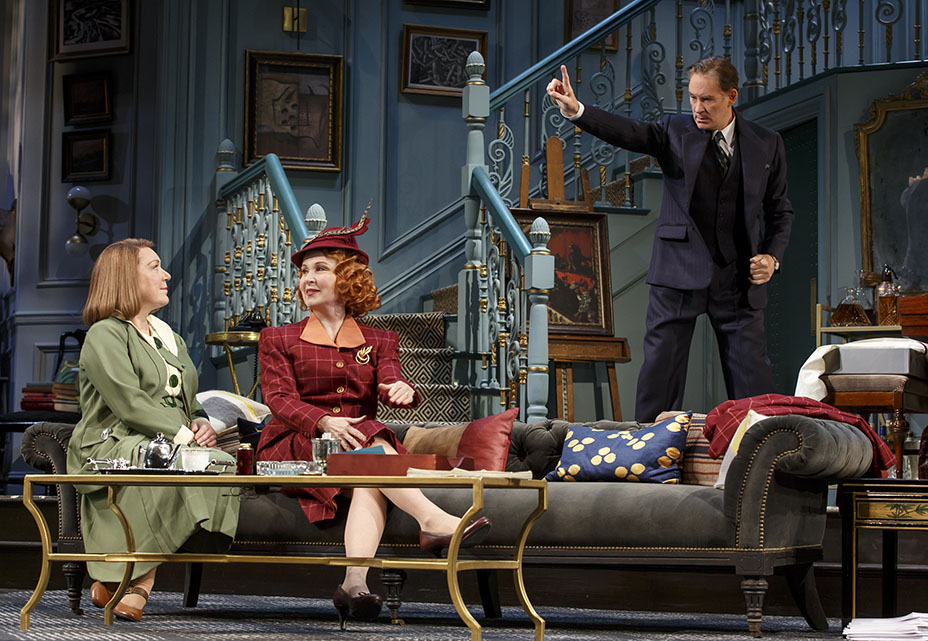 That begins when he learns that Joanna is having an affair with his director Morris, a man whose flair for self-dramatization gives Garry a run for his money in Reg Rogers’ amusing performance, dripping in droll curlicues. Despite their frictions, Garry, Liz, Monica, Henry and Morris form a tight unit in which femme fatale Joanna remains something of an outsider. “A bit predatory” is Garry’s initial word on her, later upgraded to “scalp hunter.”

Making her Broadway debut, Smulders looks sensational; she’s the epitome of late-’30s elegance in veteran designer Susan Hilferty’s costumes — from a drop-dead gray satin evening gown with matching cape to a chic traveling suit with silver fox stole, or even lounging around in Garry’s oversize pajamas and robe. She carries herself with poise and assurance, exuding frosty imperiousness when addressing the help. And even if the terribly posh English accent seems to require concentration, that will no doubt come more easily as the run continues, allowing her to luxuriate more fully in the tasty role.

But there’s no comparison between the cast’s old pros and its junior ranks, and it’s when the latter are central to a scene that Coward’s play shows its seams. That applies in particular to the overlong opener in which Garry and the harried members of his household conspire to usher the lovestruck young Daphne (Tedra Millan), a starry-eyed holdover from the night before, out the door. The same goes for the nervous, sexually ambiguous assaults of Patel’s Mr. Maule on Garry’s composure. (Coward seems to be dropping hints about his own closeted sexuality in those scenes.)

Actors like Kline, Nielsen, Rogers and the invaluable Burton, who played Daphne opposite George C. Scott in her 1982 Broadway debut, have this kind of material in their bones, as does the marvelous Sandra Shipley, who swans in late and makes the most of a single scene as Daphne’s doting aunt. The less experienced hands tend to show the sometimes-laborious mechanisms at work, which makes the play initially slow going.

However, von Stuelpnagel, who directed the savage black comedy Hand to God two seasons back, steadily ups the tempo throughout, orchestrating a giddy circus by the time all the conflicts have come to light. But once the mayhem dies down, and Garry momentarily extricates himself from entanglements, finally getting the peaceful respite he claims to desire, the director and Kline allow those late scenes to breathe beautifully, finding the poignancy in his inability to be alone.

Even with the play’s longueurs, it’s a pleasure to see old-fashioned entertainment like this done with such style, which extends to the casual swank of David Zinn’s fabulous set, lined with books and theater posters and eclectic modern art.

But most of all this is an unmissable occasion to see Kline, on Broadway for the first time since a 2007 Cyrano de Bergerac, doing what he does best. In the final scene, Garry snaps under the supposed strain of not quite getting what he wants, lathering up into a glorious aria of self-pity (“Where is my youth today? Where is my vitality?”) that sends him tottering down the stairs like a semi-invalid before flopping into a defeated dive onto the settee, taking just a moment to adjust a cushion. It’s a calculated tantrum of epic proportions and a three-act show unto itself.