Sarah Michelle Gellar and business partner Gia Russo have teamed up to create a cookbook that caters to getting creative in the kitchen as a family. Together they developed Stirring Up Fun with Food, which features more than 115 ways to change up everyday recipes and turn them into something that’s easy and fun for families to make.

The book features recipes that follow a month-to-month guide of what to cook for each season and holiday — for example, green-themed food for St. Patrick’s Day, mini turkey pot pies for after Thanksgiving or cookies to celebrate the unofficial Star Wars May the Fourth holiday (excerpted below). The goal was to create delicious, health-conscious recipes that were simple enough for anyone to do, inspired by the seasons of the year.

“The whole idea was, we wanted to create a cookbook that would be easy for the parents to make and also get your kids involved in the kitchen, which is always a fun thing because kids love to cook,” said Russo.

Just two years prior to its release, Russo collaborated with Gellar and Galit Laibow to create Foodstirs, a company that sells healthy baking mixes. So when Gellar was approached with the idea to create a cookbook, she turned to Russo for her expertise in entertaining and cooking, knowing they would be able to work well together.

Recently, Gellar’s husband, Freddie Prinze Jr., released a cookbook that also caters to making family meals. However, the books differ in their approach. The authors come from different backgrounds of kitchen experience that can speak to a variety of foodies.

Russo’s love for cooking stems from growing up in an Italian household with parents who enjoyed cooking every meal and entertaining large groups of guests quite often.

Aside from Russo’s personal experiences with cooking, part of the inspiration for making a family-oriented cookbook was due to Russo’s 11 year-old son. In the past, he was picky about his food, and she learned first-hand what to do to make food more appealing. And while many of the recipes are focused on pleasing families with children, adults who are looking for quick and easy meals can use it as a guide, too.

“You don’t have to have a family to cook from this cookbook. What’s really great about it is the recipes are easy, they’re delicious, they’re made with great ingredients.”

Both Russo and Gellar are mindful about what they feed their families. They believe that teaching kids about what they’re putting in their bodies at a young age can resonate with them.

“That was the thought behind the book, really getting your kids in the kitchen and explaining what these ingredients are. It’s something they’ll remember and they’ll continue to get better at it and teach their families as they get older.” 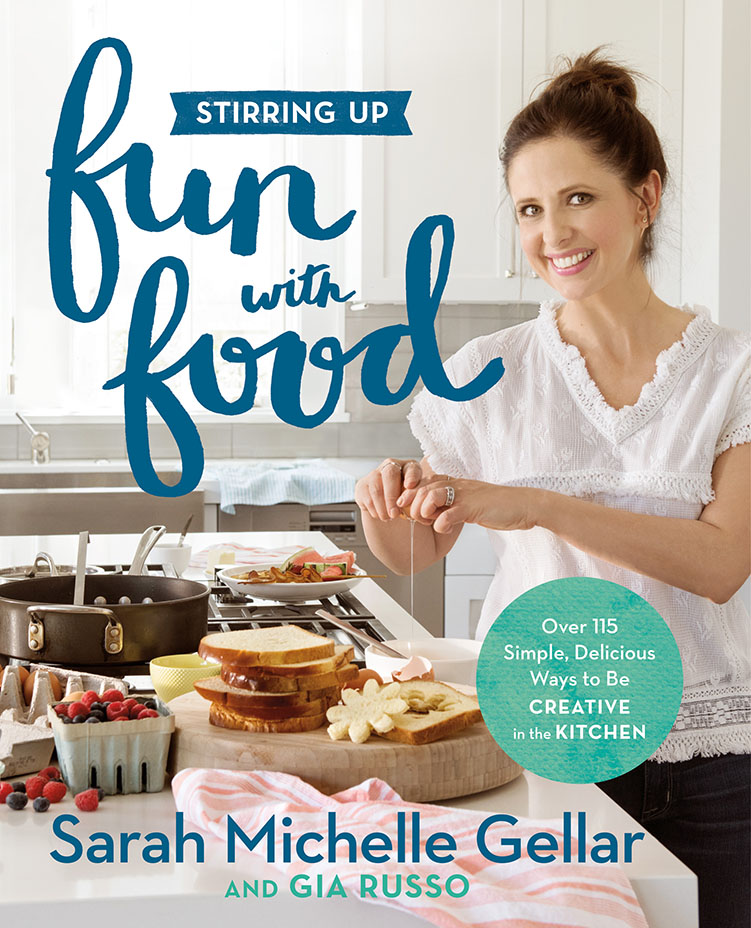 Some of Russo’s favorite recipes are ones that have been passed down through generations, like one for latkes from her mother-in-law for the holiday season, or new ideas such as serving salads in an interesting and unique way.

“We skewered the salads — which I think is very cool. It’s not something I think people would necessarily think of because it’s lettuce. And you’re like, ‘wait, you can put that on a stick?'”

Coming up for May is a special recipe celebrating Gellar’s ties with the Star Wars franchise. Both Gellar and Prinze Jr. are voices on the Disney XD series, Star Wars Rebels, so Gellar felt it would be great to incorporate a fun and sophisticated recipe into the book. Russo’s husband is also a “crazy Star Wars fan,” so the props from the photograph depicting Star Wars Day are thanks to his collection of memorabilia.

Check out the Chewie Cookies for May the Fourth Star Wars celebration from the book:

Instructions:
In a large bowl, whisk together the flour, ginger, cinnamon, baking soda, salt, cloves and nutmeg. In a medium bowl, stir together the hot water and molasses.

In the bowl of a stand mixer fitted with the paddle attachment, beat the butter and sugar on medium speed until fluffy.

With the mixer running on low speed, gradually add the flour mixture to the butter mixture alternately with the molasses mixture, beginning and ending with the flour mixture. Turn the dough out onto a work surface and shape it into a 1-inch-thick disk. Wrap with waxed paper and chill in the refrigerator for at least 1 hour or up to 2 days.

On a lightly floured surface, roll the chilled dough to ¼-inch thickness. Cut the dough with a 3- or 4-inch gingerbread man-shaped cookie cutter. Press the dough with the tines of a fork to create a furry texture. Place the cookies 2 inches apart on the prepared baking sheets.

Bake for 15 to 18 minutes. Let cool on the baking sheets for 5 minutes, then transfer to wire racks to cook completely. Decorate the cookies with the melted chocolate.

From Stirring Up Fun with Food by Sarah Michelle Gellar and Gia Russo (Grand Central Life & Style). Reprinted with permission.