Seemingly no aspect of entertainment – or life, for that matter – has gone untouched by this pandemic. We’ve found new and creative ways to keep ourselves entertained these past 18 months, but many of the old ways endured some tough times that they’re still struggling to reemerge from.

Very few types of entertainment were as affected as live theater. The very word “live” shows just how hard it is to fully recreate the experience in an era of social distancing. Now, at long last, the lights of Broadway are turning back on, to the delight of the vaccinated and masked audiences who once again venture into Times Square. To celebrate, the biggest night on Broadway is back after a lengthy hiatus. For the first time in 840 days, it is time to honor the best of the stage.

If this year has taught us anything, it’s just how unpredictable life can be. So, this year in particular, predicting the Tonys with data alone may be foolhardy. The model blends which categories a show is nominated in, the show’s performance at previous theater awards, and aggregated critic predictions, weighting each based on how closely it has aligned with past Tony Awards.

But between the lengthy delay and changes in the precursor awards, I certainly don’t expect anything like the model’s 22-for-26 performance in 2019. But regardless of how many mathematical favorites win or lose, I’m more than willing to settle for a moving and musical night of entertainment on Sunday. 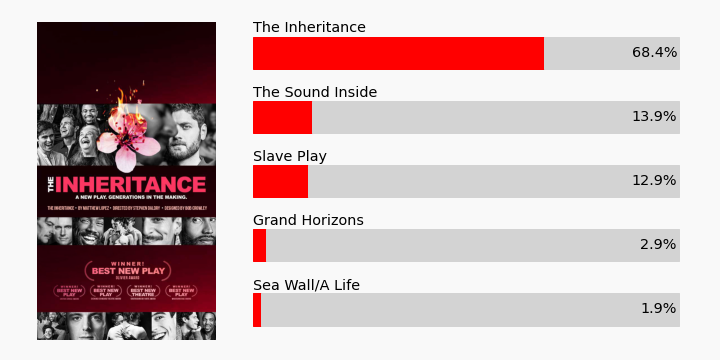 The expert consensus strongly favors Slave Play. So what’s the math doing here? When Slave Play first emerged as an off-Broadway play, it went almost completely overlooked by both the Drama Desk and Outer Critics Circle Awards, two big drivers of the model. But add in the fact that voters are judging shows they haven’t seen in a year-and-a-half, and the truth is probably that this category is simply more up-in-the-air than either critics or the data are suggesting.

Best Revival of a Play

A Soldier’s Play has been lauded for four decades, going back to its Pulitzer Prize for playwright Charles Fuller in 1982, along with honors for its off-Broadway run. But it never got a chance on Broadway until 2020. Once it did, Tony voters got on board, handing it seven nominations. Compared to Betrayal’s four and Frankie and Johnny’s two, that gives A Soldier’s Play nearly a two-in-three shot.

Leading Actor in a Play 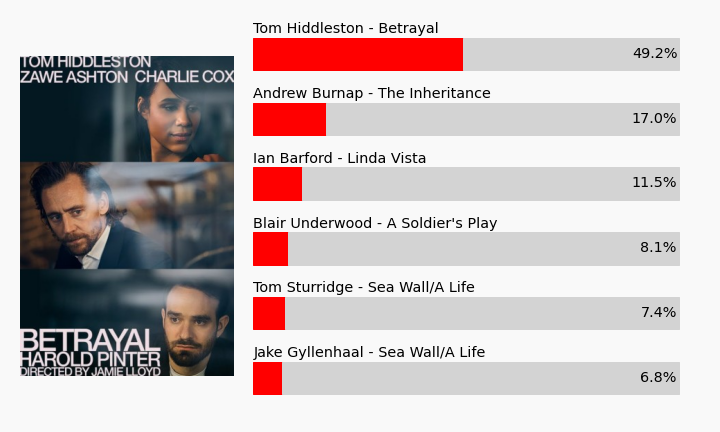 Many of this year’s Tony categories have fewer nominees than usual. So it’s a nice change of pace to see six strong in the Leading Actor in a Play category. And yet, even though the Drama Desk Awards also chose six nominees for this category, there wasn’t a single overlap. Tom Hiddleston (Betrayal) and Ian Barford (Linda Vista) are the only two Outer Critics Circle winners, but Barford has a disadvantage as the only one of these six nominees whose play is not up for Best Play or Best Revival of a Play.

Leading Actress in a Play

There are plenty of close categories this year, but the math says that Leading Actress in a Play is the single closest. Just 4.1 percentage points separate Joaquina Kalukango (Slave Play) and Mary-Louise Parker (The Sound Inside). Those are the two Outer Critics Circle winners, and the aggregated critic predictions I use are evenly split. Slave Play is the more nominated show overall, just enough to give Kalukango a slight edge.

Featured Actor in a Play 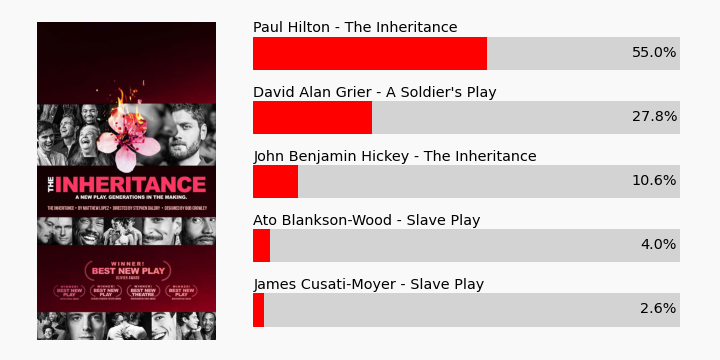 We’ve got lots of potential for vote-splitting here, with a pair of actors from each of The Inheritance and Slave Play. That could create an opening for the second-place nominee, David Alan Grier (A Soldier’s Play). This category hasn’t seen a winner from a play with multiple nominees since 2014, when Mark Rylance won the award despite being one of three actors from Twelfth Night. Paul Hilton (The Inheritance) is favored to be the next one.

Featured Actress in a Play 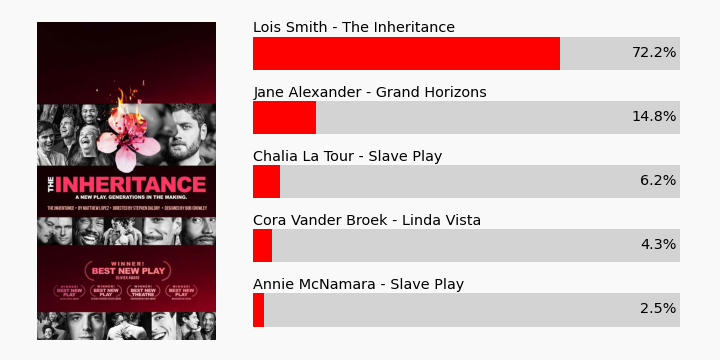 Only two plays last decade won both of the featured acting categories: The Normal Heart in 2011 (John Benjamin Hickey and Ellen Barkin), and The Humans in 2016 (Reed Birney and Jayne Houdyshell). The data favors The Inheritance to join that group, if Paul Hilton and Lois Smith both emerge victorious.

Direction of a Play

This is one of those everybody’s-got-a-shot categories, with each nominee at 14% or higher to win. But some have more of a shot than others. Stephen Daldry’s direction of The Inheritance, an adaption of “Howard’s End” about the AIDS crisis, is out in front. But Robert O’Hara’s helming of Slave Play, which broke the record for most Tony nominations for a play with a dozen, is very much still in play.

Costume Design of a Play 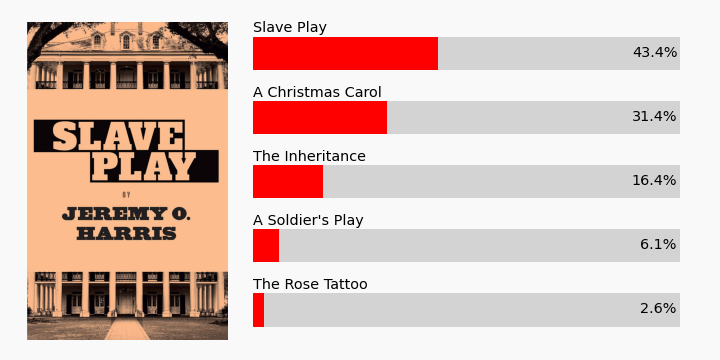 Dede Ayite is running against herself, with nominations for Slave Play and A Soldier’s Play. But it’s as if she had to design even more than that, since Slave Play demands costumes for both our modern era and the antebellum south all in one show. And so that’s the show that gives her a small lead over Rob Howell’s designs for A Christmas Carol.

Lighting Design of a Play 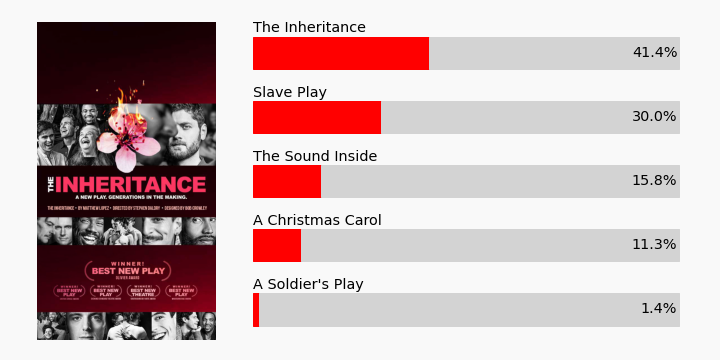 We’re seeing these top two names a lot this year: The Inheritance and Slave Play combined for 23 nominations, and they’re favored to win in 8 of the 11 play categories. In this category, it’s The Inheritance slightly above Slave Play, but they combine for a 71% chance.

Scenic Design of a Play 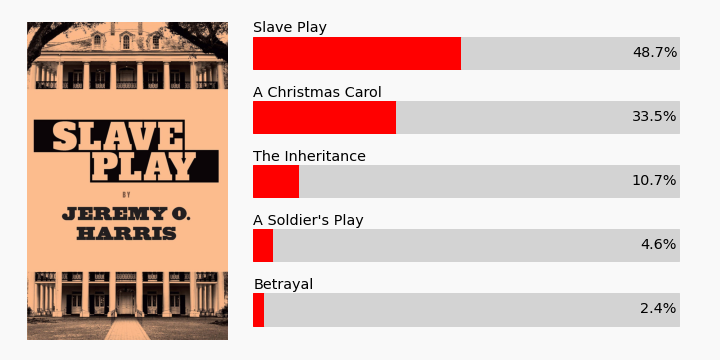 Clint Ramos is a double-nominee this year, handling both the costume design and scenic design for Slave Play. Impressively, three people managed to pull that off this year in that pair of categories: Ramos, Bob Crowley (The Inheritance), and Rob Howell (A Christmas Carol). But only Ramos is favored to walk away with a trophy.

Sound Design of a Play 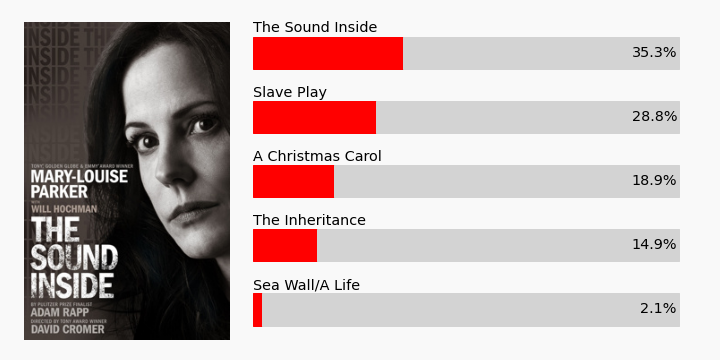 The last few categories, we talked a lot about some impressive double-nominees. Not enough for you? Daniel Kluger is a triple-nominee. He’s up for Best Original Score for The Sound Inside, as well as Best Sound Design of a Play for both The Sound Inside and Sea Wall/A Life. He’s favored to win in this category … but you’ll have to read tomorrow’s article to learn if he’s favored for a second trophy.

Tomorrow: Part II of this article will look at the musical categories at this year’s Tonys.

Ben Zauzmer (@BensOscarMath) uses data to write about awards shows for The Hollywood Reporter, including his mathematical Tony predictions which went 22 for 26 last time. He is the Director of Baseball Analytics for the New York Mets.