For the fourth year in a row, The Hollywood Reporter paid a visit to New York to chat with a group of Tony-nominated performers about their journeys to and experiences on Broadway. A year after “the Hamiltonys,” the Great White Way is less in the forefront of the national conversation, but make no mistake about it: plenty of other great shows (plays and musicals, originals and revivals) have moved into the neighborhood, driven by their own top-tier talent (of all ages and levels of experience, more than a few direct from Hollywood).

On May 8, THR convened a gathering at Highline Stages in the Meatpacking District with UnREAL-turned-Broadway breakout Denee Benton, 25, who’s playing Natasha, a countess engaged to one man but then ensnared by another in 1812 Moscow, in the musical Natasha, Pierre & the Great Comet of 1812; SNL alum turned two-time Tony winner Christine Ebersole, 64, who’s playing Elizabeth Arden, a cosmetics pioneer in mid-20th century America, in the musical War Paint; Pride & Prejudice darling turned two-time Tony winner Jennifer Ehle, 47, who’s playing Mona Juul, an official in Norway’s Foreign Ministry who helps to broker landmark advances towards peace in the Middle East between 1992 and 1993, in the play Oslo; the double Oscar and triple Emmy winning screen legend Sally Field, 70, who’s playing Amanda Wingfield, a former Southern belle raising her children under trying circumstances in 1937 St. Louis, in the play The Glass Menagerie; and three-time Oscar nominee, four-time Emmy winner and now four-time Tony nominee Laura Linney, 53, who’s playing Regina, a calculating woman from a complicated family in 1900 Alabama — and, on other days, Birdie, a sweet and wounded woman from the same family — in the play The Little Foxes.

Denee, you’re at an interesting point. This is your first Broadway show and it’s obviously going great — it’s the most Tony-nominated show of the season and you’re up for personal recognition, as well. You’ve already done some television work, and I’m sure film is going to be next. How do you envision theater factoring into your plans going forward?

BENTON My dream is to be able to do everything. Different things excite me in different ways. I think theater is one of those things I’d like to come back to but have a little bit more leverage. But it’s what you fall in love with, when you’re standing in the center of the stage and showing the world your soul. That feeling that you get? It’s pretty magical. So I think I’ll always have to do it. But I’d like to dip into the film world.

With our remaining time, I’d like to play a little game we call “Rapid Fire” — I’m going to raise a topic and you say the first thing that comes to your mind. Your most unusual ritual before or after a show or during intermission?

EHLE After the end of act one I walk down through the vom and I go past Stephanie, who is the wonderful woman who puts a mic on me because there are certain bits in the show where I have to speak over video projections. She’s very sweet and she always does it in a yoga pose, and she holds out a thing of chocolate-covered almonds and I take one. That’s our ritual. That’s my reward at the end of act one.

LINNEY I have handshakes with my stage manager. It’s a secret, sacred ritual. (Laughs.)

FIELD As soon as I get off that stage, as long as it’s not a matinee, I go right to my dressing room and waiting for me in there is one of those four-ounce bottles of water — except it’s not water. It looks a great deal like a urine sample. It’s Chardonnay. From then on, I’ve got it tucked in my pocket.

EBERSOLE Just getting ready for act two — I change my lipstick and Richard comes in and takes the pins out of my hair because I have a very quick change where I have to change the wig and costumes and everything in less than a minute.

BENTON I’m just hightailing it to the bathroom. My pee breaks are very strategic cause you’re on stage for so long. Those are the things you don’t think about.

FIELD How long are you on stage before you get a pee break?

BENTON Well, nothing compared to you.

FIELD OK, I was just wondering.

BENTON But my bladder is like this big [makes a small circular shape with her hand], and there’s just so much singing and water!

BENTON I’d be in Depends. (Laughs.)

FIELD And sometimes, when I’m standing down there with the chair, just before I got up, I’ll go, “Oh, no.”

Oddest thing in your dressing room?

BENTON I’ve got a lot of Russian dolls that fans make.

EHLE I have a lovely little thimble that the stage managing team gave me when we did the show last summer. Cynthia Nixon had told me that the thimble used to be a symbol if a woman was in love or had a crush on another woman in the company — they would leave a thimble on their dressing place because in Peter Pan, to Peter Pan a thimble is a kiss. That’s one of my most precious things in my dressing room.

EBERSOLE I have a fun pink dressing room. And my friend Peter Glebo, who did the dressing room, gave me this big poster of Marilyn Monroe standing outside of Elizabeth Arden’s salon.

Entrance applause, yes or no?

EBERSOLE I think it works in musicals. 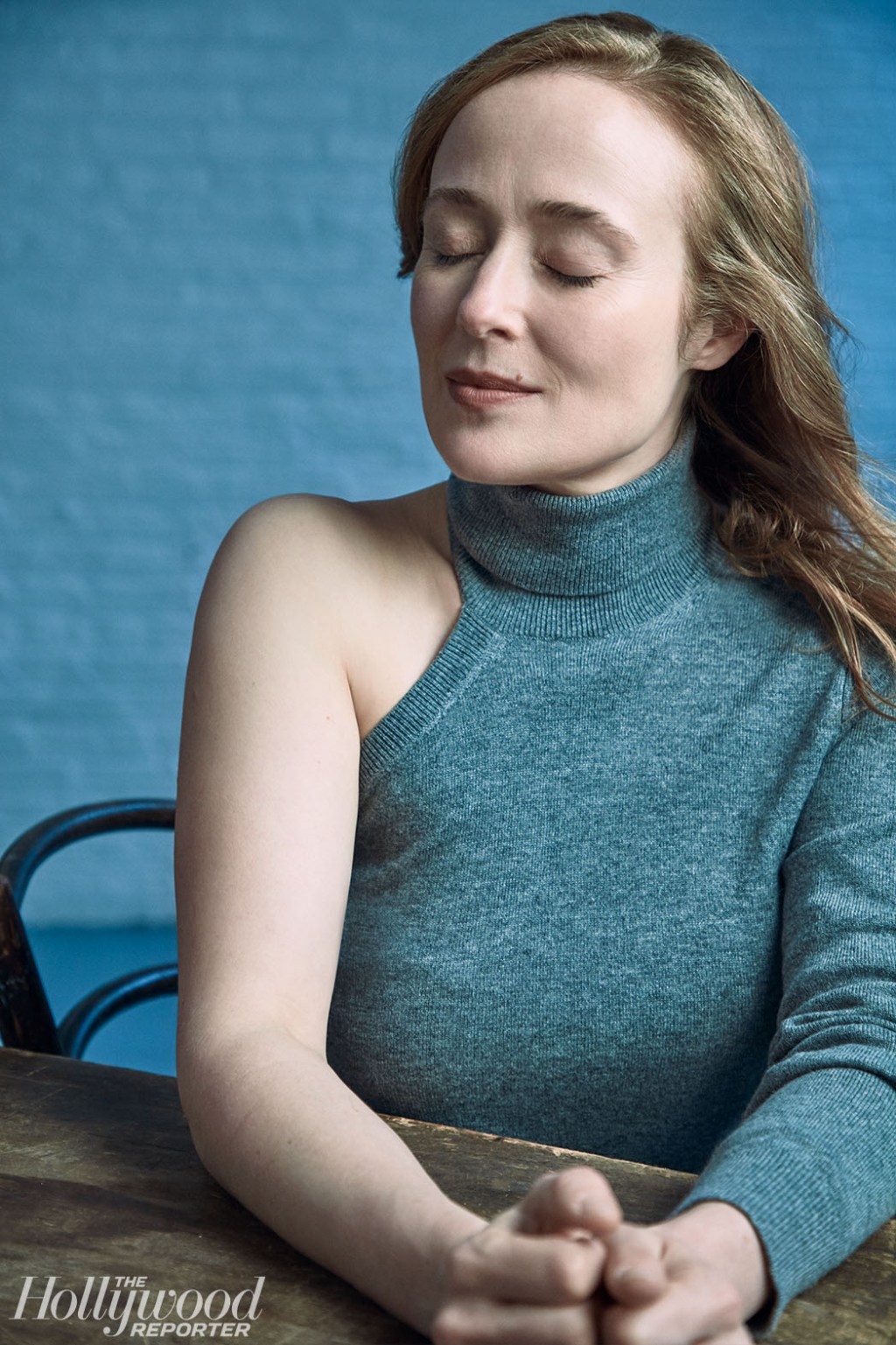 Most annoying thing audience members do?

LINNEY Phones — they don’t turn off their phones.

FIELD Any kind of movement, breathing, talking, sneezing, coughing. Coughing! Like, put your hand over your mouth!

BENTON We have shakers in our show, and during the last scene, if they’re shaking them, I’m like…

But that’s self-inflicted — you guys hand them out! Do you read reviews?

BENTON I read mine. I was excited. It was my first time!

Thank you for your honesty. What you do on your day off?

EBERSOLE This is our day off!

EHLE I take the kids to school.

FIELD I rarely really have a day off. I don’t remember what they’re like.

LINNEY It all just turns into a big blur. It’s a Monday when the rest of the world is working, and everyone knows they can’t get to you until Monday, so then everyone gets to you on a Monday.

BENTON What’s hard about doing theater is you’re doing press at the same time. With like film or TV, it’s like a year later.

The number of performances per week you wish you could do?

FIELD I wouldn’t mind getting rid of both of the matinees — let’s talk real! Two-show days are so hard.

EHLE Matinees are my favorite.

BENTON My ideal would be four two-show days and then three days off.

FIELD You know what? I would definitely double up days and give us more than one day off so we can come back to the world. I don’t even sing and listen to my voice!

Non-friend or relative whose attendance at your show has meant the most to you?

LINNEY John Glover came very early. I’ve just admired him for so long, and he was so kind and so supportive. It’s nice when there’s someone who you admire, who you don’t know very well, who comes back and says, “You’re on the right track. Good, keeping going.” That makes a big difference.

BENTON Definitely. There are heroes, but then for me there was this 16-year-old girl who saw our show and then was talking to our choreographer. She was a black girl and she was like, “Denee was a princess up there. I didn’t know we could be princesses.” For me, any time I’m exhausted — I wrote that down ’cause sometimes it’s important and it’s helpful to make it bigger than yourself and remember we have a huge impact.

BENTON Oh, I have a lot of thoughts. I just feel like theater is always been ahead of the curve with the way that we cast things and the way that we write things and just deconstructing a theater and telling a story in a completely different way and not getting stuck on, “Well, will this sell?” I mean, the Hamiltons of the world happen far before anyone in film gets the idea that we’re allowed to do this. For me, it’s the casting and the imagination.

FIELD What I know to be true about being in the theater community, whether it be Broadway or just theater in New York, is that it’s very different than the Hollywood community. There is a real feeling of community. There is a feeling of, “We all know how hard this is.” That’s not to say all Hollywood gatherings are just awful, but there is a feeling of less camaraderie with other performers in Hollywood than there is here. The feeling here is that we’re all together in this noble work that’s breathtakingly difficult and isn’t for sissies, and so everybody is applauding everybody’s shows and can’t wait to get to see everybody else’s shows. That kind of feeling in the world that I’ve grown up in, in Hollywood, doesn’t exist. It’s way too competitive. There’s a feeling that, “If you have a hit show, what’s going to happen to my it show?” Here, there’s much more a feeling of rooting for each other.

What would you be if you were not an actor?

EHLE I have no idea.

BENTON Maybe some sort of political correspondent on a show on CNN so I’d get to talk a lot. (Laughs.)

LINNEY If I could be good at it, I’d like to be a great florist. I’m terrible — I just put things and it looks ridiculous, I kill every orchid anyone ever sends me — but there’s something I love about the idea of being around flowers.

Well, thank you for giving up one of the Mondays when you could’ve pursued one of these other things. We really appreciate you doing this.