It says something about the supreme power of flesh-and-blood people portraying raw human feeling onstage, without the filter of another medium, that the most emotionally devastating and visually stunning moment in the radical new Broadway revival of West Side Story occurs when its extensive video elements are stripped away. That happens in the coup de théâtre at the musical’s climax, as a torrential downpour fills the immense darkness of the stage while a shattered young woman cradles her dead lover’s body. Like many big-swing experimental bids to reimagine a canonical work, director Ivo van Hove’s vigorously youthful take on the 1957 classic comes with losses and gains, but the latter are what you’ll remember.

The big news when this revival was announced was its complete departure, for the first time in a major New York production, from the iconic template of original director-choreographer Jerome Robbins, whose eternally cool, finger-snapping dance moves for the Jets and Sharks, the modern-day counterparts of the Montagues and Capulets in this gangland retelling of Romeo and Juliet, were immortalized in the 1961 movie.

Van Hove and his Belgian compatriot, choreographer Anne Teresa De Keersmaaker, don’t supplant the memory of Robbins’ electrifying dances; nor does that seem their intention. Their vision for West Side Story is decidedly contemporary, and the most thrilling aspect of the production is the extreme youth of its ensemble, dressed by costumer An D’Huys in streetwear that reads very now, as does the prevalence of elaborate skin ink (Andrew Sotomayor did the makeup and tattoo designs). The cast’s age range amplifies the urgency and authenticity of their characters’ passions — their love and brotherhood, their rage and hatred, their blind, reckless stupidity, and ultimately, their sorrow.

That same intense vitality informs De Keersmaeker’s choreography, an exhilarating blend of modern ballet with brawling athleticism, graced with fluid collapsing rolls, slides, flips and tumbles, and inflected here and there with respectful echoes of Robbins. The moves of the Hispanic Sharks are accented with fiercely rhythmic Latino angularity, while the Jets, a gang now mixing black with white, are looser, with more swagger and occasional nods to hip-hop. The dances, which drive this production more than any other element, are alive with visceral sexuality and violence. 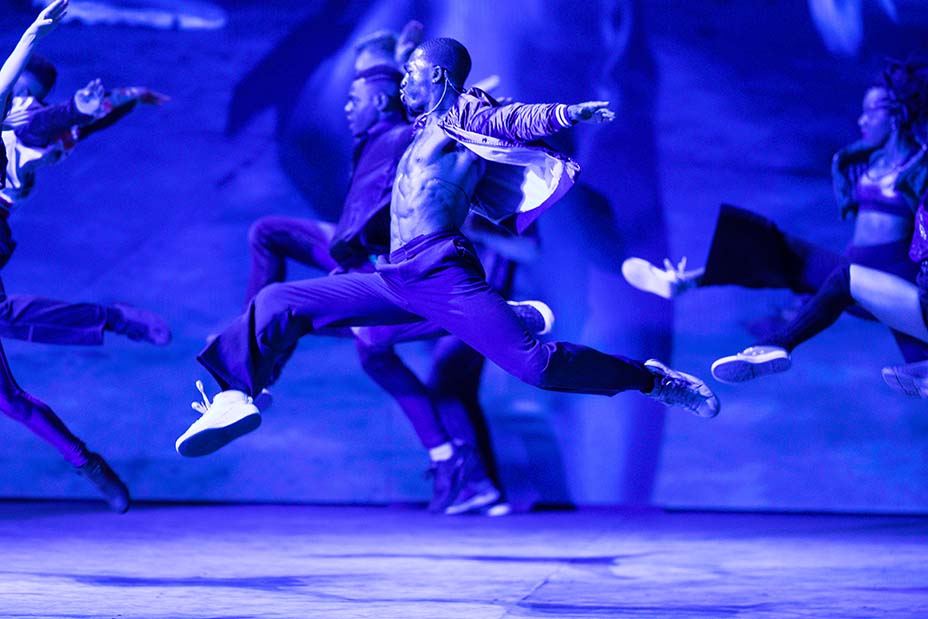 That emphasis on youth, with its tornado-force emotional turbulence, would appear also to be driving this revival’s appeal for young audiences, fueling capacity business throughout its extended preview period. And young theatergoers, attuned to the pervasive, immersive role of the screen as the interface for so much of 21st century life, seem likely to be the ones most receptive to the predominance of video.

Luke Halls’ high-definition images flood the rear wall like a massive widescreen canvas, often dwarfing the terrific performers. It’s frequently more like a competition for attention than a symbiotic relationship, and by virtue of its size, the screen tends to win — like the Jumbotron displays at arena concerts or sports events.

It can be arresting, as the Jets and Sharks line up downstage and face the audience during the abridged overture while an unseen camera pans across their scowling faces in towering close-up on the wall behind. And the expertly shot cityscape footage of industrial wasteland, housing projects, freeway underpasses, subways and streets wrapped in scaffolding — filmed in various New York City boroughs, unlike the specific pre-gentrification Upper West Side setting of the original — brings a vividly atmospheric sense of place. But the overwhelming use of video takes some getting used to, especially in the musical numbers.

In Network last season, van Hove’s obsession with video already risked diluting the immediacy of live theater, staging certain scenes in out-of-the-way nooks barely visible or sometimes even completely hidden to the audience and beaming them up on a screen. In that play about the corrupting power of television, the multimedia bombardment made narrative sense. In a musical, our need to connect with the performers is paramount, and the director doesn’t always make that easy. 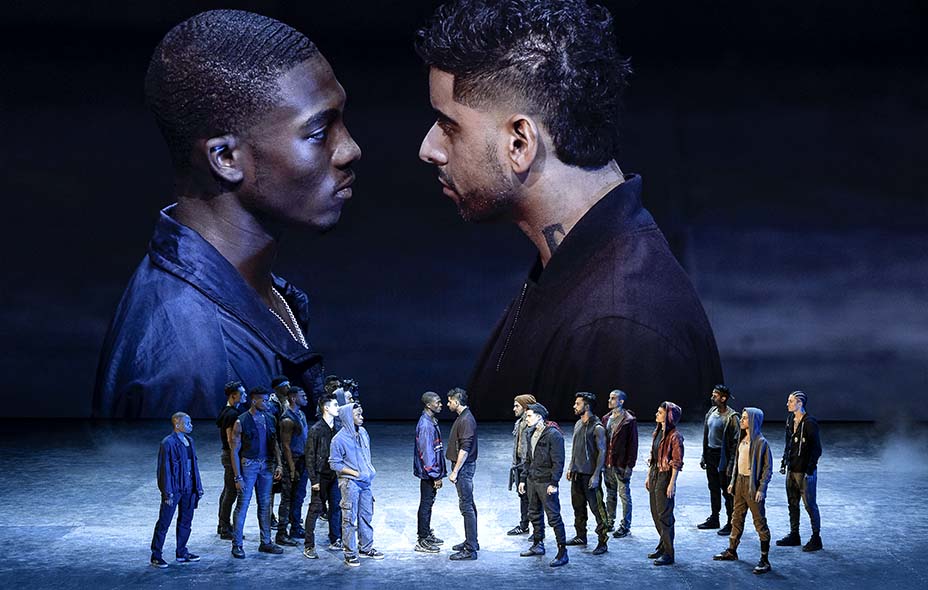 That’s especially the case in scenes set at Doc’s drugstore, where the Jets congregate, and the bridal shop where the women associated with the Sharks work, chief among them Maria (Shereen Pimentel) and Anita (Yesenia Ayala). Lighting and set designer Jan Versweyweld has built those hangouts as cubbyholes in the rear wall, so their incredible detail reads well on the big screen but their position makes the actors feel miles from the audience.

Scenes in the apartment building where Maria lives and her union with star-crossed lover Tony (Isaac Powell) is consummated are performed in a backstage dressing room and stairwell; paradoxically, these interludes that play out entirely onscreen are much more seamlessly integrated with the stage action.

The blurring of the boundaries between theater and film does yield a number of ingenious payoffs, particularly once you adjust to the technology’s initially distancing effect. A transition from the bridal shop via an overhead wide shot to the “Dance at the Gym” sequence — one of many numbers in Leonard Bernstein’s brilliant syncopated score that still brings jolts of excitement — is breathtaking. Likewise, an extended tracking shot of Powell’s Tony sprinting down a street after his attempt to halt the fatal rumble between the Jets and Sharks has failed.

Perhaps the most dazzling use of video is a multiplying split-screen effect that might make Brian De Palma envious, as rival leaders Riff (Dharon E. Jones) and Bernardo (Amar Ramasar) prepare to face off in the “Tonight” quintet. The flow from that tense pre-filmed sequence into the physical action as the principal characters hit the stage is superbly coordinated. 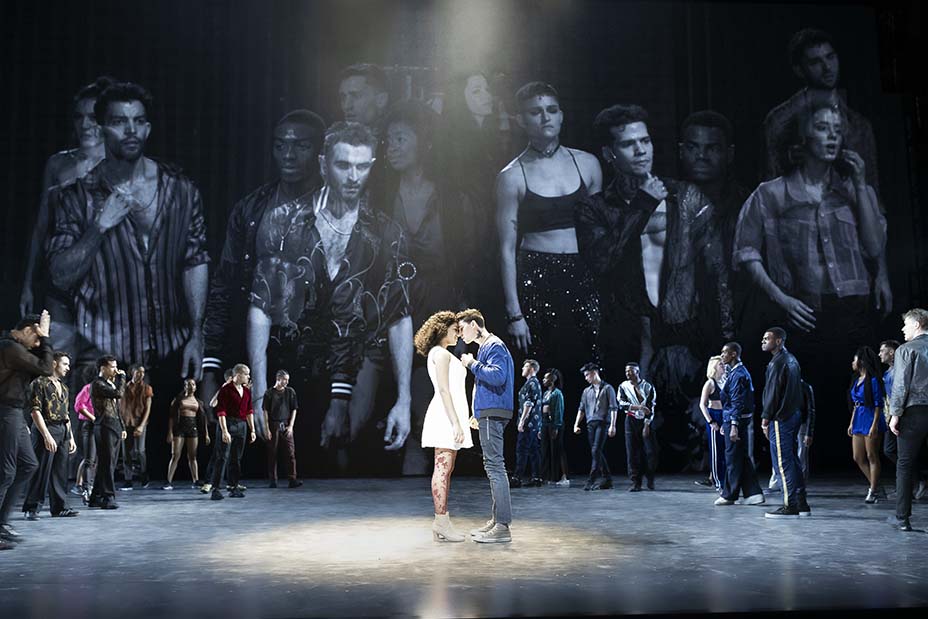 Much of the filmed material — generated by 25 cameras, some unseen and others visible onstage, their operators weaving amongst the bodies as they dance or fight — seems designed to accelerate the condensed narrative, which unfolds here in a breathless one hour and 40 minutes, without intermission.

The grittiness of van Hove’s approach means the removal of Maria’s light and airy “I Feel Pretty” makes sense (and lyricist Stephen Sondheim, who has cited his work on this song as a personal embarrassment, probably won’t mind). But the attempt to transform the shticky “Gee, Officer Krupke,” via video elements, into an unflinching depiction of police brutality, racial profiling, the prison pipeline and Black Lives Matter unrest feels intrusive. The lyrics remain comedy lyrics, and the song’s placement late in the show is more awkward than ever; the Jets would hardly be pausing to joke about the callousness of a local beat cop after their leader has been killed and the former member who stepped up to avenge his death is on the run.

There are other debatably heavy-handed touches, too, like Anita being roughed up by the Jets when she goes to Doc’s store to pass on a message for Tony from Maria. The threat of sexual violence has always been there in Arthur Laurents’ book, but van Hove turns it into a graphic rape attempt.

Whether or not every individual directorial adjustment works, however, the steady crescendo of the production’s emotional impact right through to its wrenchingly affecting finale is undeniable. That’s due also to the excellent casting of mostly unfamiliar faces — including a staggering 33 Broadway debuts. 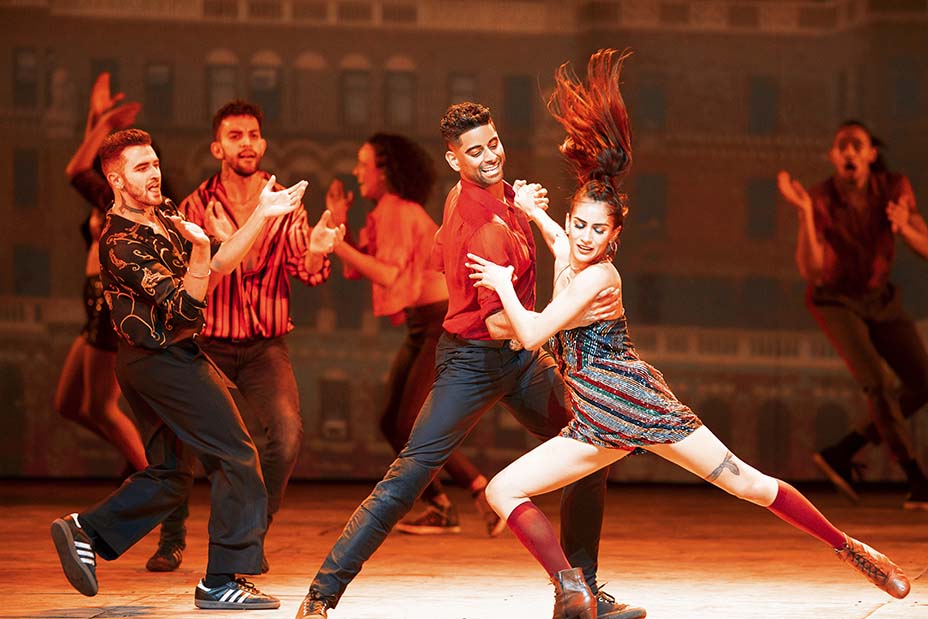 Pimentel is a major discovery as Maria, her crystalline operatic soprano used in gorgeous contrast to the more naturalistic singing styles of the other principals to suggest the purity of her love for Tony. Her “I Have a Love” is almost religious in its ecstatic declaration. She’s also physically robust, with a feistiness that makes her no less tough than the brassy Anita. And Pimentel’s chemistry with the lithe Powell’s achingly sweet Tony makes the love story deeply moving; their soaring romantic duets, “Tonight,” “One Hand, One Heart” and “Somewhere,” are beautiful. Having a Tony who seems in many ways softer, dreamier than Maria adds to the contemporized feeling, and Powell ably conveys his transported state in lovely interpretations of “Something’s Coming” and “Maria.”

Ayala delivers sexy self-assurance and spirit in the plum role of Anita, leading the rousing “America,” in which the female Sharks taunt the men about their immigrant mentality, or spitting out her bitter grief over the killing of her boyfriend Bernardo in “A Boy Like That.” She’s also a knockout dancer, working her high ponytail like a whip. As Bernardo, New York City Ballet principal Ramasar (whose involvement in earlier allegations of inappropriate sexual conduct has sparked cancel-culture protests) builds impressively on the musical-theater skills he first tested in the 2018 Carousel revival. His dancing is charged with authority and the festering resentment of a proud man who refuses to be treated as a second-class citizen, while the fact that Ramasar appears older than most of the actors playing gang members lends gravitas to ‘Nardo’s seniority.

Jones is a dynamic, hard-bodied presence as Riff, dancing with tremendous energy and bravado. But the entire ensemble of young singer-actor-dancers registers as a powerful unit. Van Hove and De Keersmaeker’s staging of the Jets’ “Cool” number is a bracing highlight, with the screen used to show the women waiting on edge in Doc’s store while the men dance out front during the tense buildup to the fight, before the two factions eventually merge downstage.

Traditionalists may roll their eyes at some of van Hove’s tweaks, like having a gay couple among the Sharks and liberally mixing heterosexual and queer unions among the dancers gravitating toward a place of greater harmony in the idealized closing images of “Somewhere.” But the stated aim of this revival from the start was to stand alongside the classic model as a West Side Story for a new generation, a goal in which it resoundingly succeeds. And in doing so the production gets a 10-month head start on Steven Spielberg’s upcoming big-screen remake. Like last season’s revisionist makeover of Rodgers and Hammerstein’s Oklahoma! it’s bound to be polarizing, but it’s definitely not to be missed. 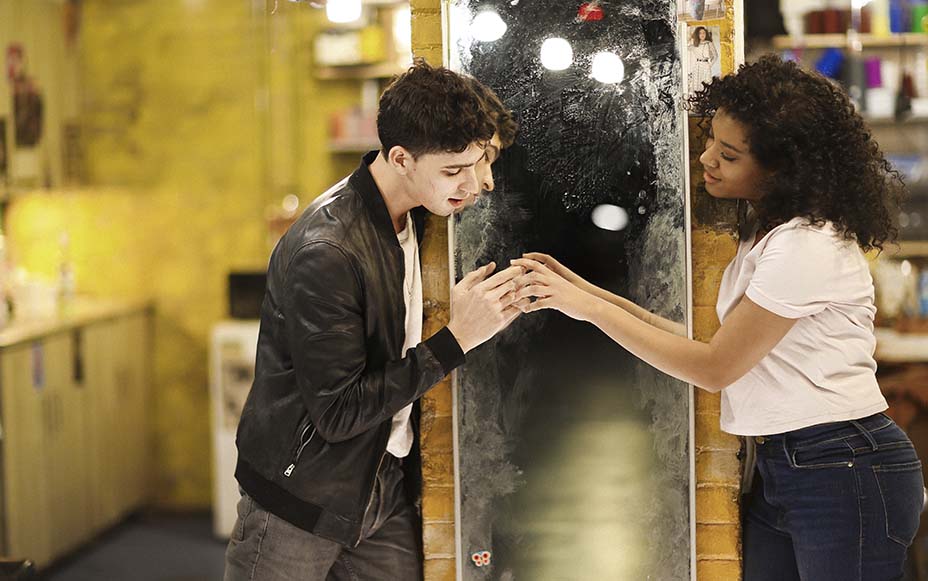