The 50th anniversary of the American Film Institute Conservatory drew a storied array of graduates from its inaugural Class of 1969 back to the film school’s original campus, Beverly Hills’ Greystone Mansion.

“We would go into the screening rooms and watch one movie after another,” recalled Deschanel to The Hollywood Reporter. “We would order up all the films from Alfred Hitchcock or John Ford or any of the directors who we were interested in. Our real education was all gathering together after watching lots of movies, and talking about them, and figuring out how they were made.”

Representing the Class of 1970 at the anniversary event were visionary filmmaker David Lynch (Blue Velvet, Twin Peaks), who began filming his breakthrough work Eraserhead as an AFI Fellow, and blaxploitation pioneer Oscar Williams (The Final Comedown).

“Tonight, what’s strong is to see so many fellows in the first year are here, and to see these people with decades having passed, and they all have such wonderful stories… and most of them have had wonderful filmmaking careers,” George Stevens, Jr., the esteemed and accomplished producer and AFI founder whose vision for the Conservatory fueled its creation, told THR.

“It was an idea, a concept, this idea of a bridge between film study and the filmmaking profession in an advanced center, and that has worked and we made all kinds of progress through the years,” said Stevens, noting that the school’s current Class of 2020 is 51 percent female and 41 percent people of color. “So it’s an idea that’s lived and it’s rewarding to see it.”

The early days had a romantic bent: the students lived at the mansion, following  unstructured courses of study, absorbing film upon film and entertaining guest lectures from some of the most accomplished filmmakers of the time.

“There was no real curriculum, but they had a number of really good people come in and talk about making their movies and that kind of thing, but there was no real, defined classes in editing and cinematography and everything,” said Deschanel. “After a while, everybody sort of got the idea that if they wanted to really learn something, they had to go out and make their own movies.”

The Conservatory commenced at a time when the long-extant studio system was experiencing a seismic cultural shift. “People came here of independent mind,” said Stevens. “Terrence Malick, David Lynch — they’re two examples of real people who were going to bring original ideas to filmmaking, and I said at the opening that we want to grow and change as film itself does.”

“We never felt like a vanguard, because we never thought we’d ever really get to make movies!” laughed Deschanel. “It felt like a really closed industry, and that if you wanted to make movies, you’d have to go to Europe or somewhere. I was a big fan of Truffaut and Godard and Bergman and all the great European filmmakers because when I would see their movies, I’d go, ‘Oh, I could make a movie like that because you just need a camera and some black and white film and you can go make them and shoot them in daylight.’ Those Hollywood movies were all big arc lights and cranes and all this stuff, and not necessarily the movies I was interested in making.”

Behind the scenes, the venture came with tremendous challenges as well. “We had been told we were going to have 10 percent of the National Arts Endowment budget,” said Stevens. “Then [President Richard] Nixon was elected and a new person came in to the National Endowment and that stopped. So we were constantly struggling for funding, but it was a great challenge and I would not have missed the opportunity to do it.”

Future Universal Pictures studio head Tom Pollock, served as an assistant to Stevens’ filmmaker father, AFI founder George Stevens, Sr. (Shane, Giant), and handled the Conservatory’s business and legal affairs. With the help of the City of Beverly Hills’ sympathetic mayor Phyllis Seaton, who was the wife of writer-director George Seaton, Pollock negotiated a sweetheart deal for the Greystone grounds, which had been acquired by the city.

“I’d done the lease with the city of Beverly Hills, for a dollar a year,” chuckled Pollock.

Kagan vividly remembers the astounding access the fellows had in terms of A-list filmmakers. “On the weekends, the masters who were still around — meaning Howard Hawks and Billy Wilder — they would come and they would show a film, and they would sit with us,” he recalled. “John Cassavetes had an office here, and John became my mentor — I had enormous admiration for John.”

The encounters could be eye-opening. “A lot of the old guys would be real cranky,” Deschanel chuckled. “Especially someone like John Ford. None of them had the respect for themselves that they deserved. I mean, it was just sort of like, ‘Yeah, I make Westerns…’ They were pretty humble, so it was kind of nice, Because they didn’t mince words — they weren’t trying to keep anything a secret, and they would reveal to you their methodology of making movies.”

“Federico Fellini, he sat in the room that was our big theater,” remembered Stevens, who moderated the Italian filmmaker’s seminar alongside Anthony Quinn. “The fellows were all into improvisation, and we were trying to teach film structure. And finally one of them stood up and said, ‘Mr. Fellini, I know that you do a lot of improvisation and then you change a lot.'” Fellini was quick to disabuse him, comparing his process to the then-current highly organized, detail-oriented, exhaustively planned-out mission that landed the first American astronauts on the moon. “It sobered everybody up. I mean, the master, the avant-garde, had spoken.”

The alumni convened for a formal ceremony in the mansion’s courtyard that featured a 1980s vintage film hosted by AFI booster Charlton Heston detailing the Conservatory’s functions on the eve of its relocation to its current Griffith Park-adjacent campus and the implementation of more formalized academic structures, and a 1970s NBC news report on the Conservatory that included shots of Malick filming his first short film Lanton Mills, his thesis project, with Harry Dean Stanton on a horse in the streets of Beverly Hills.

Deschanel, who photographed Lanton Mills, said that while he’s surprised at the level of success in the industry the first class achieved, he sees the common denominator. “If you think about it, it’s all the people who were survivors,” he said. “A lot of them were massively successful because they lasted a long time. … I’m still shooting now, so what can I say?” 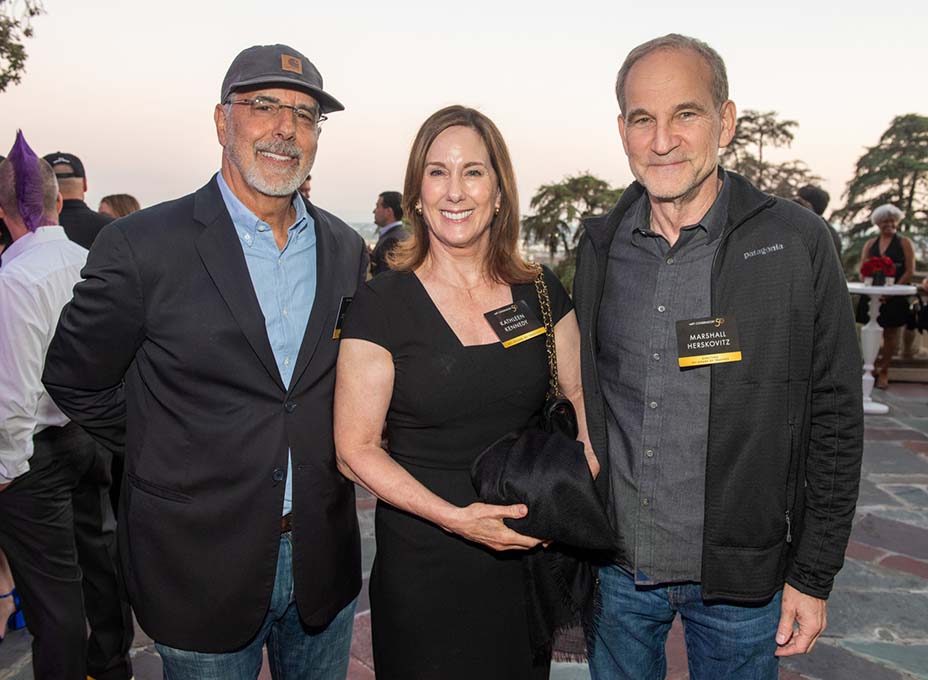