Actress Aonika Laurent Thomas (Bones, Olympus Has Fallen) describes her “stunning” experiences fighting for immigrant families at the Mexican-American border, calling family separations “un-American.” Here, she talks to The Hollywood Reporter about going to a rally at the Texas-Mexico border at Tornillo on June 24, attended by Rob Reiner and Frances Fisher, as well as traveling to San Diego July 13 on a bus alongside Sarah Michelle Gellar and Minka Kelly to hear from activists.

I’m a mom — I’m about to cry as I say this to you — and we have two children. Since they were little, I’ve been giving them this advice: If we’re ever separated, in the mall, at the restaurant, in the theater, look for the person that works there. Look for the person in the uniform and they will help you get back to Mama. And the fact that now, the person in the uniform is tearing the child away from their mother, it’s the opposite of what the world is supposed to be. I wonder if those mothers had the same sentiment for their children.

So I went to Texas on June 24 with my husband, Sean Patrick Thomas, who had been contacted by civic media organization Voto Latino about a rally at the border. They asked if we wanted to come. We didn’t know what our presence would do, but we just felt like we had to do something. So we hopped on a plane and went.

We arrived at a hotel and met with a group of 20-somethings from Voto Latino. We got on the bus and drove down to the border to the rally with speakers and protesters. We were only allowed there briefly, because the crowd had to disperse after a certain amount of time. Voto Latino wanted us to be as peaceful and as law-abiding as possible.

The only thing we could see were the tents and guards. We saw no signs of the children. It was 100 degrees outside, 106 degrees the day before, and they were in tents. No playing or laughter. I couldn’t get close, because we were told that we couldn’t step on the federal ground where they were, or we would be arrested. So I did not see inside the tents, I couldn’t tell you if the accounts that we received were accurate, but from what I understood, some of the tents had no tarp or floor, so these kids were just waking up and stepping on hot pavement. That’s heartbreaking. 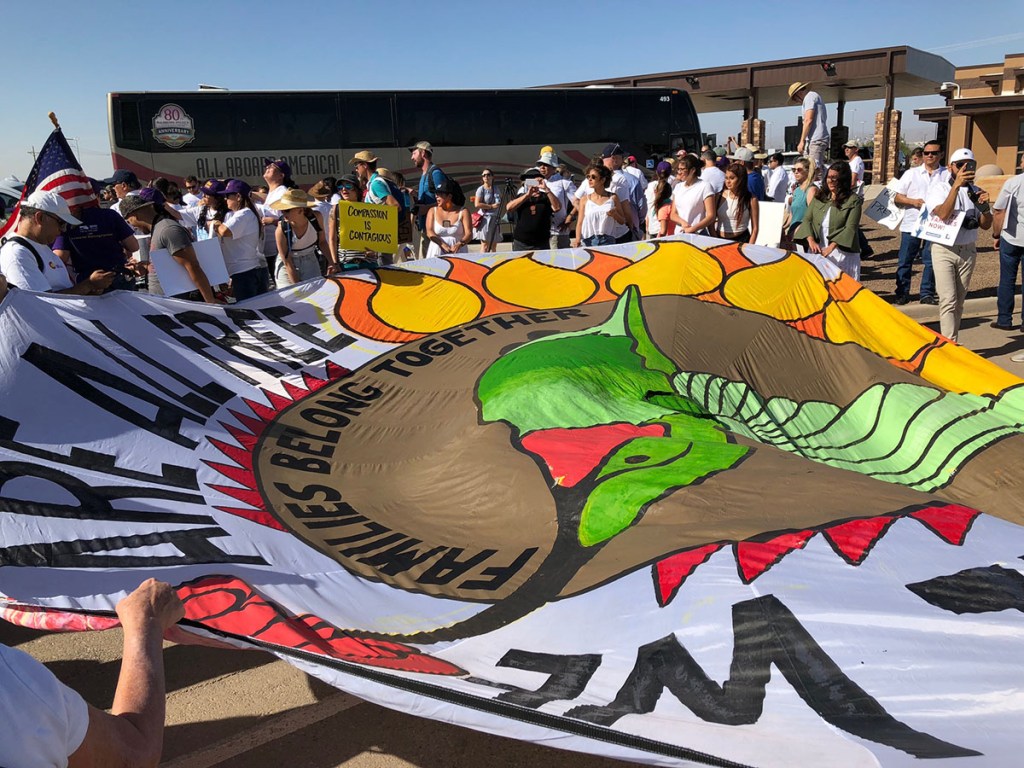 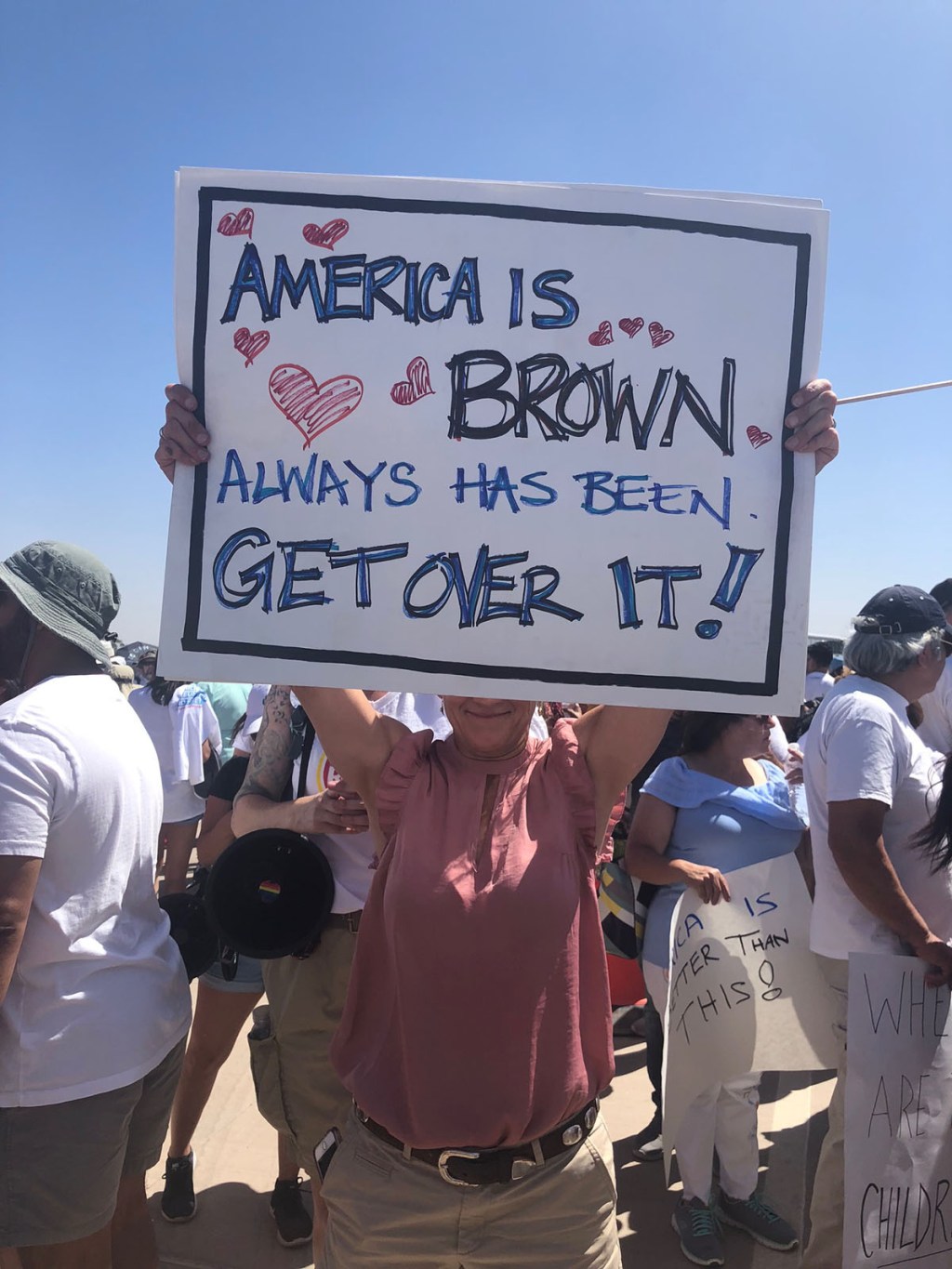 We were so close to those horrendous tents, but couldn’t walk in and just take all those children into my arms and say, “I’ll help you find your mama. You don’t deserve to be here.” The hardest part was leaving, knowing that you were leaving children that shouldn’t be there in the first place, children that were crying out for their parents, children that didn’t understand why they were being detained.

There was a woman who brought two big ice chests filled with popsicles and sweet treats to be able to give to them, and the border patrol wouldn’t let her give it. It was cruelty just for cruelty’s sake. I don’t know if there’s some kind of rule of why you can’t give water and popsicles to kids. It left this woman in tears, and she ended up passing it out to the people that were there protesting.

Frances Fisher was very loud and proud and angry and awesome. Rob Reiner was out there in the hot sun with no hat, not just giving a speech, but you could tell the passion and compassion and the empathy for fellow human beings that I feel like is missing around the world. I don’t know why we all aren’t marching in the streets. This is really sick and we’re just sitting here.

Hollywood Stars Who Are Helping Migrant Families at the U.S.-Mexico Border

On July 13, I went to San Diego to learn more about what was happening, so that we would know how to speak about it. [Social impact consultant] Elsa Marie Collins, her sister [cross-border expert] Yolanda Selene Walther-Meade and Zoe Winkler [Henry Winkler’s daughter] arranged the trip, and a group of 33 of us in Los Angeles, mostly women with a few men, boarded a bus. We spoke to activists and attorneys from the ACLU to know what the main issues were, what their needs are. 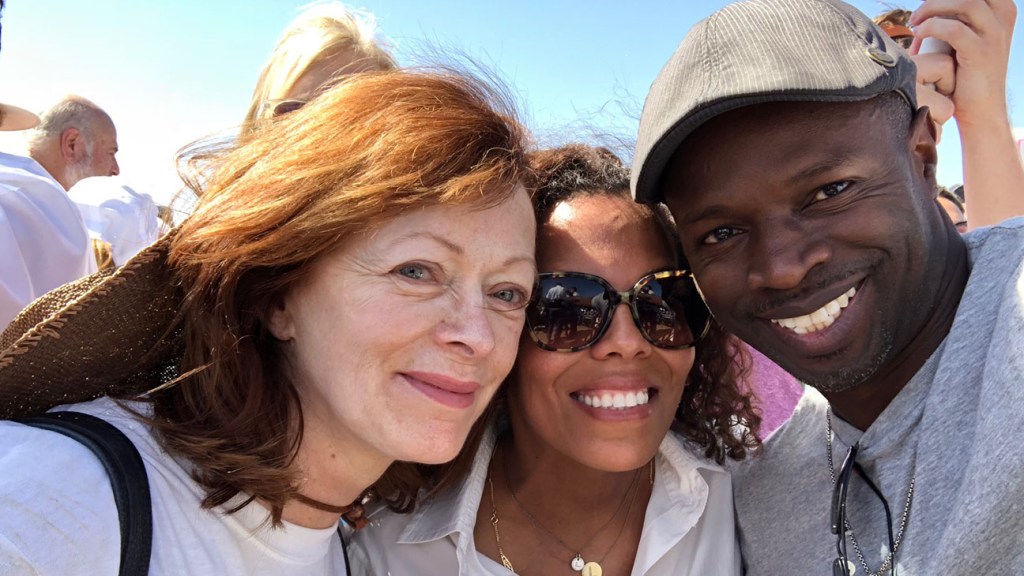 We met people involved in a hunger strike with Hungry 4 Freedom, and four of them spoke to us about the strike, which was next to one of the detention centers. And then we heard from the Families Belong Together organization and learned separated parents are being asked to pay for their own DNA tests to find their kids again, as well as airfare to be reunited with their kids. [As of last week, a federal judge in San Diego ruled that the federal government would have to underwrite those expenses following an ACLU lawsuit.]

The bus was accompanied by a truck that carried more than 500 boxes donated by the Good+ Foundation, an anti-family-poverty organization, which contained blankets, soap, backpacks and even nail polish, to help young people feel more human. The boxes were delivered to nonprofit Border Angels, the Casa Cornelia Law Center and the holding facility. San Diego activist Mark Lane told the group he was overwhelmed when a 16-year-old detainee was excited to have a coloring book and for a child that age to be so happy to be able to color showed how little they have.

I am proud of every human that was on that bus. The trip began by Elsa having us all introduce ourselves, and there were many mothers on the bus, so it was really emotional. Minka Kelly, Sarah Michelle Gellar, fashion designer Rachel Pally — they didn’t bring what they do and who they are into the mix, they’re just concerned, good, kick-ass human beings. I love that these women aren’t afraid to just call out injustice on their platforms. I know a lot of people in the business who will freely admit they won’t talk about their politics. This is not about politics. This is just about right and wrong and being with an amazing group of people who were saying, “Hey, I’m not afraid that somebody won’t like me because I’m going to take a stand. I’m going to be a part of this movement to help bring these families together.”

What most stood out us was in Chicano Park, when we heard from twin daughters who were about 12 years old, whose father was taken, but not at the border. They were already living in the U.S. and their parents weren’t legal. So the Trump administration policies had officials knocking on doors, and their parents were taken out of their house. The border patrol was coming in, saying, “You’re smuggling drugs. You’re trafficking children.” These kids were hearing the most horrific things about their parents, which were not true. The older brother was about to take his tests for college that Saturday. Someone in the neighborhood saw the parents being taken and gave the kids Mark’s number and said, “Call this man.” Mark took them to see their parents and help them with the process of trying to get them out. The mother was released after being detained for 30 days but not the father.

When asked to speak, the mother was so traumatized that she couldn’t speak, and so the daughters spoke on her behalf about their experience having their mom and dad taken from them. That really broke our hearts. I don’t think you have to be a mother to be moved by them. Just human. 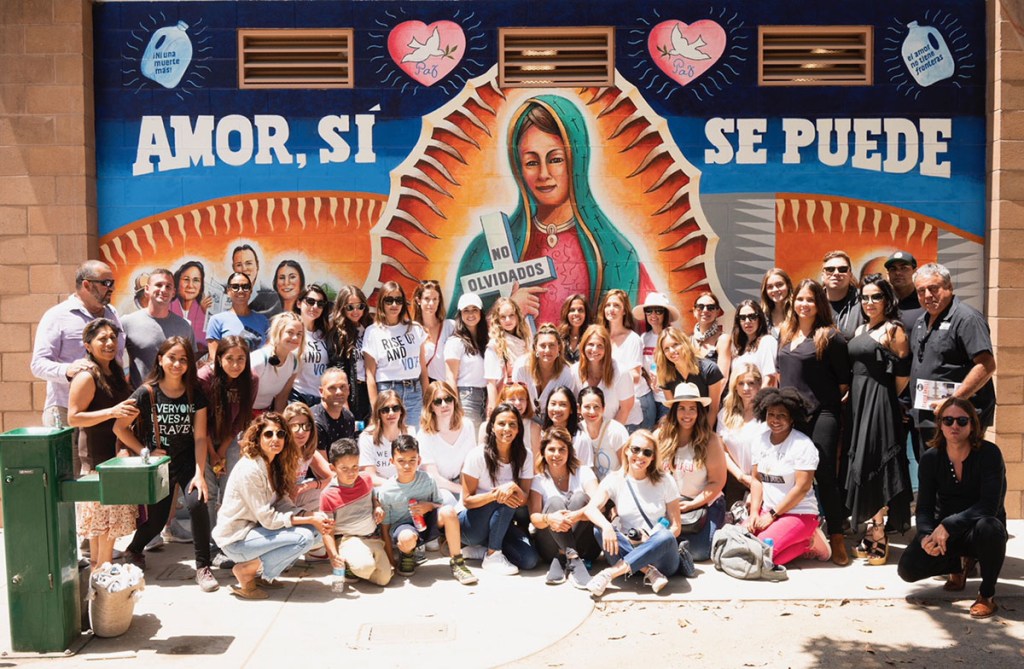 Another one of the biggest takeaways was when Mark spoke of a woman at a detention center, who was pregnant and was berated by a U.S. border-patrol agent, “You’re nobody to come to our country and have a baby here.” The woman was transferred into ICE custody and started spotting, and they didn’t give her medical care for a week and a half other than Tylenol. They came and got her again even though she said she was feeling fine, and was taken to the hospital and shackled to the bed with an IV. Within the hour, she had bad cramps and was bleeding and miscarried her baby.

I think everyone lost it on that. I was even the dummy that said, “Are you sure?” because you don’t want to believe that could happen.

I was stunned. We hear about this on TV and in the news, but to hear from someone who has experienced it was different. This experience is shaping who the kids are going to be for the rest of their lives. And who are they going to trust? They’re no longer going to trust the man in the uniform who’s there to serve and to protect. 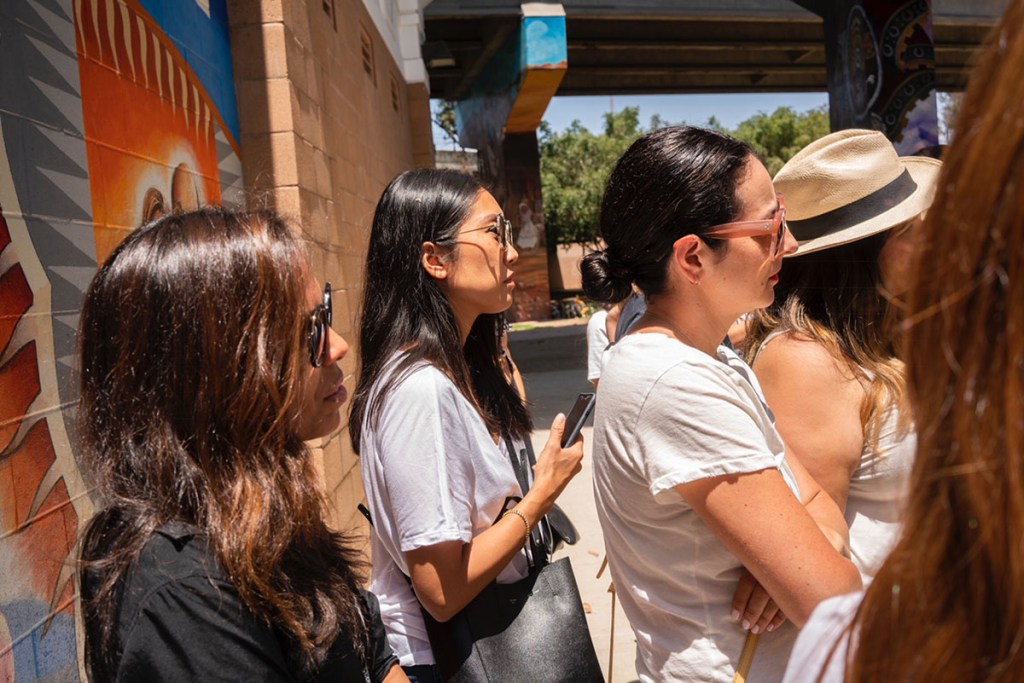 At the end of the day, I was thinking whose nerves do I have to get on? What congressmen do we have to bother? Where are Sean and I going to donate? On the way back, because we had become more aware, we were a little more uplifted. We have the ammunition. Everybody came back in planning mode, in that Mama Bear kick-ass mode. I just hope that we stand up and say, “Enough.” Enough. Our entire nation should be outraged.

Ben Stiller: "We Need to Do More to Stand in Solidarity With Refugees" (Guest Column)