Stockard Channing first starred last year in London in Alexi Kaye Campbell’s 2009 family-gathering drama Apologia, about a revered American art historian and former ’60s radical leftist, absorbing the resentment of her two adult British sons. She returns to the same role with a different director and cast in this classy off-Broadway production. Her co-stars include Hugh Dancy, who appeared in the New York premiere of Campbell’s excellent breakthrough play The Pride.

The attraction of these accomplished actors to the material is understandable given the playwright’s facility for razor-sharp dialogue, smart humor and crackling confrontations. But for a study of a mother divided between professional passion, political activism and parental failings, the play lacks emotional payoff. It’s more stimulating on a scene-by-scene basis than it is satisfying overall.

Director Daniel Aukin has put together an elegant production with a uniformly fine cast, and the writing is laced with poignant Chekhovian shadings. But thematically, we’ve been down this road many times before, with more penetrating insights.

The generational conflict between the baby boomers — whose belief in change is now tarnished by disillusionment — and the offspring they judge to be driven by nothing beyond their own well-being and material gain, is familiar terrain. Campbell approaches it with even-handedness to a degree, stirring in the festering wounds of children who feel they were left behind in their mother’s tireless quest for self-actualization. But the arguments tend to bubble up without fully developing, leaving the drama with a somewhat ambivalent engine.

Kristin Miller is a juicy role for the inimitably acerbic Channing. Or she would be if the complex character hadn’t been shortchanged by the playwright. The 60-something public intellectual is brittle and brilliant, whether dispensing witty put-downs, illumining her audience on the sublimity of Giotto’s frescoes, or deflecting criticism of her patchy presence in the childhood of her sons, Peter and Simon, played in contrasting moods by Dancy. But Kristin is denied the basic function contained in the single word title of both the play and her memoir: “Apologia.”

“It means a formal, written defense of one’s opinions or conduct,” she explains with crisp condescension to a character deftly set up as the lightweight in the room, only to be revealed as perhaps the most perceptive. Certainly the most compassionate. “Not to be confused with an apology,” adds Kristin.

Campbell is a gifted playwright, but his focus on Kristin’s defensive nature, while allowing ample space for Channing to show the unspoken suffering beneath her character’s narcissism, robs her of a voice when it most matters. Even the feminist convictions that drove her to forge a path in a patriarchal academic field are left largely between the lines. So while the actor’s skill lets us feel Kristin’s pain, the writing makes it tough to care about her. The play seems to be pointing this complicated, uncompromising, perhaps misunderstood woman toward a climactic exculpation speech — or at the very least, a justification — but it never arrives.

The play is built around the well-worn structure of a reunion that turns sour, the occasion a double celebration of Kristin’s birthday and the publication of her memoir. First to arrive at her homey, book-lined cottage in the English countryside are Peter and his American fiancée Trudi (Talene Monahon), a perky chipmunk whose opening bid for common ground with the host is shot down when Kristin makes clear that she’s American, “by birth, not by choice.” The time is spring 2009, and while Kristin acknowledges that the recent election of the first African-American president is a good thing, she adds, “But let’s wait and see how things turn out in the long run.” 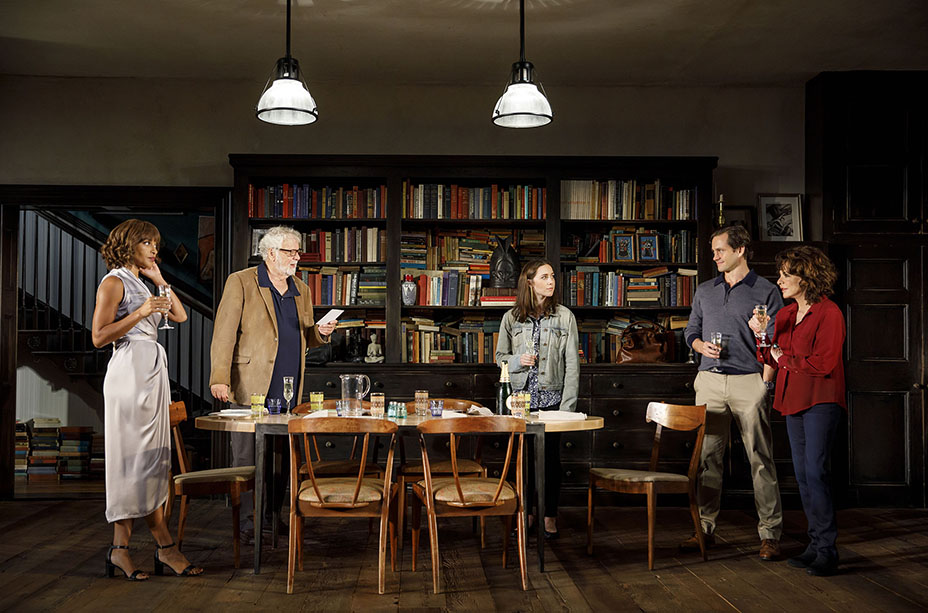 Her distaste for Peter’s career in international banking (“keeping the whole of sub-Saharan Africa in crippling debt”) is nothing new. But everything about the ingratiating Trudi seems to put Kristin on edge, from the surprise news that the guest is a vegetarian, upsetting the already precarious dinner plans, to the revelation that she first encountered Peter at a prayer meeting. Having divested herself, like most of her politically aligned generation, of the convenient comforts and constricting rules of organized religion, Kristin is unsettled to learn that Peter might be embracing Christianity. “That’s one thing I thought I got right,” she deadpans, hinting at her various shortcomings as a mother that will surface throughout the play.

Dancy expertly balances diplomacy and forbearance as Peter handles his spiky mother with practiced finesse. But what makes these early scenes bristle entertainingly is the refusal of Trudi to be intimidated by barbs that would scare any less self-possessed young person into silence. Monahon navigates the challenging situation with humor and a righteous armor that hard-working Trudi wears lightly enough to earn Kristin’s begrudging respect.

The party grows with the arrival of Kristin’s gay best friend and activist comrade of 40 years, Hugh (distinguished stage director John Tillinger, making a rare and welcome return to acting), on hand to drop droll zingers; and Simon’s actress girlfriend Claire (Megalyn Echikunwoke), an overdressed beauty who stars in a hit TV show which she specifies is not a soap: “It’s more of a serialized drama that follows the trajectories of various people’s lives.” Kristin is openly critical of Claire’s perceived sellout path from playing Nora in a godawful-sounding experimental staging of A Doll’s House to doing vacuous trash about glamorized climbers. But the unapologetic younger woman stands her ground, eventually calling Kristin a dinosaur, sitting in judgment.

Simon, who is purportedly working on a novel, remains absent during dinner, though general concern is aired over his mental stability and his disappearances for days at a time. There’s also a grave tone to the announcement that he needs to talk to Kristin, after reading her memoir and wondering aloud, “Why did she have children?”

The play reflects on the value of lives dedicated to fighting for social reform, veering between acknowledgment of society’s gains in terms of rights and freedoms, and dismissal of the idealism of the protest generation as a fashionable phase en route to middle-aged complacency and suburban affluence. The latter view causes friction when Claire uses words like “hilarious” and “sweet” in response to a photograph of Kristin and Hugh at a Vietnam War protest in the late ’60s.

Campbell’s real subject, however, is the price paid by Kristin’s sons during childhood for her dedication to something larger than family, and it’s in this “sins of the mother” aspect that the drama feels unbalanced. She explains the absence of even a mention of Peter and Simon in her book by stressing, “It’s a work memoir.” But when Simon shows up in the middle of the night, drenched by rain and injured from a fall, he unpacks the full extent of his deep psychological hurt during a scene of painful intimacy between mother and son.

There’s no faulting the actors here; both Channing and Dancy convey their characters’ conflicting feelings of tenderness, anger and guilt with somber emotional transparency. But after accusations are lobbed that Kristin never fought for her sons after their father got custody when Peter was 11 and Simon 9, the playwright then diminishes his hyper-articulate main character by making internalized remorse her only response. This rankles even more because nobody ever states the obvious — that blame would seldom land so heavily on a father in a similar situation.

Kristin’s anguish in her final moments alone on stage is moving, but it nonetheless leaves us with the nagging impression that this 10-year-old play still needs work.