When A-list art collectors begin arriving in South Florida next week for Art Basel Miami Beach, they’ll check into such hotels as the W, the Setai and the 1 Hotel, all of which are just steps from the beach and thus all are at prime risk for flooding due to climate change.

Now, one artist is dramatizing that scenario with a two-tiered public art pavilion (open to the public Dec. 6-Dec. 10) featuring small-scale, minimalist sculptures of those trendy hotels disappearing into water, reappearing, and then being inundated again. The piece, Slow-Moving Luminaries, by Los Angeles-based artist and director Lars Jan, represents the third activation by luxury Swiss watchmaker Audemars Piguet as part of its annual art commission at Art Basel.

The artwork, measuring 50 feet wide, 100 feet long and 15 feet high, is installed just steps from the W Hotel, in a sandy beach-side lot next to Collins Park in South Beach. “I can’t be more than a few feet above sea level,” Jan tells THR, sitting in his studio a few weeks ago, still hard at work rushing to finish the project. Jan is known for his long-running Early Morning Opera project (which was included in the Sundance Film Festival’s New Frontiers creative space in 2011) and he and his partner, Obie-winning actress Mia Barron, are collaborating on a performance-piece adaptation of Joan Didion’s “The White Album” essay that will premiere at BAM next year in Brooklyn.

His Miami installation is topped by a roof covered in four inches of water. The building models, says the artist, “basically are on these lifts that are traveling 16 feet in the air. You can see the buildings emerging through these apertures in the roof and rising up through the water. They rise up and sink back down. And they’re all visible from this upper-viewing deck and the hotels are actually directly behind the pavilion. So you see the W hotel and the 1 Hotel and the rest of the skyline of South Beach.” 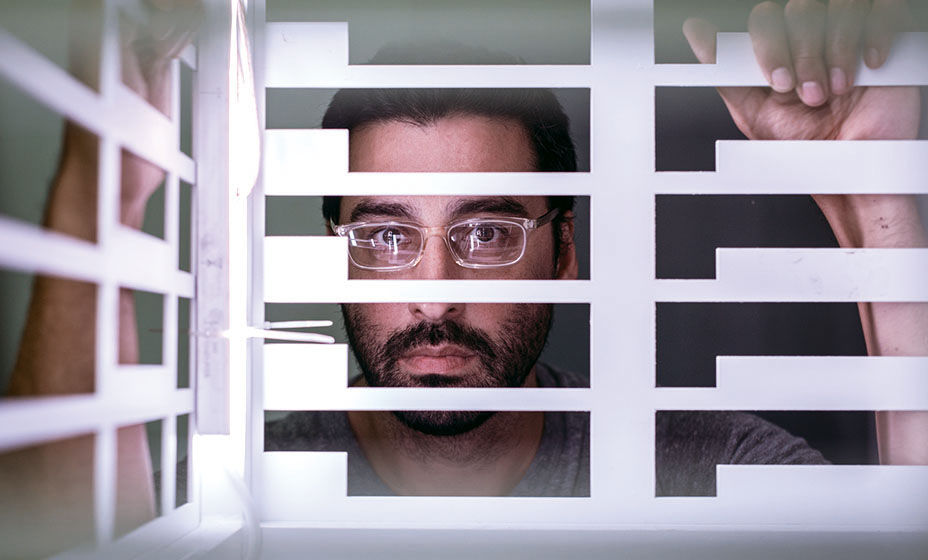 On the lower level, meanwhile, is a sort of labyrinth, partly planted like a landscape, with large scrim sheets stretched floor-to-ceiling both obscuring the way and also revealing views of the building models in motion. The lower level will also include a series of light boxes and a film showing images of a building being deluged in the ocean. A path on the ground floor spells out the letters SOS.

Jan experienced flooding in Miami two years ago when he was there for the opening of his last major installation, Holoscenes, which itself was partly inspired by the phenomenon of climate change and involved performers inside a 3,500-gallon aquarium featuring water levels that rose and fell.

“That was the first time when I was in Miami and I saw what it felt like. We were kind of poured on and flooded constantly. The flooding came from the storm drain. The water came out from underneath. It didn’t come from somewhere else or come from down, it came up. And they had something called sunny day flooding, which has to do with tidal movements. It won’t be raining and a few inches of water will come up in the streets.”

Audemars Piguet’s specifications for the project were broad. “They wanted an artist who could reflect a tension between tradition and innovation and that the project be about precision and complexity,” says independent curator Kathleen Forde, who was selected by the watch brand to suggest a slate of artists for consideration for the commission.

The search was eventually narrowed to four top candidates who all traveled to Audemars Piguet’s headquarters in Le Brassus, Switzerland, to present proposals. Jan was selected about a year and a half ago and has been working nearly full-time on the project ever since. He collaborated with the watch company to create an algorithm that governs the tempo in which the building models rise and fall. “There’s a synchronized movement of all the buildings,” says Jan. “Hopefully, maybe they’re a bit hypnotic and maybe some dark humor there.”

Everything to Do in Miami During Art Basel