The Institute of Contemporary Art, Los Angeles honored one of the city’s favorite daughters, Betye Saar, on June 1 with a Benefit Brunch attended by art world luminaries including Mark Bradford, Kenny Scharf, MOCA director Klaus Biesenbach and actor CCH Pounder, who led a tribute to the artist.

Guests began arriving at a warehouse in the arts district at around noon, milling by the bar under gray skies, sipping fruity vodka concoctions and nibbling bite-size scones and strawberries, before moving inside for a brunch offering two types of salad followed by cherry tomato and summer squash frittata and chicken and sage sausage with a choice of rosé or white wine.

“Ships at a distance have every man’s wish on board. For some they come in with the tide. For others they sail forever on the horizon, never out of sight, never landing until the Watcher turns his eyes away in resignation,” Pounder said to the crowd, reciting the opening words of Zora Neale Hurston’s novel Their Eyes Were Watching God. “Not so for Betye Saar. Her ship has landed in ports consistently over seven decades.”

Saar began making art in the 1950s, assembling found objects in a manner similar to artist Simon Rodia, whose famous Watts Towers were an inspiration since her childhood, and Joseph Cornell, whose work she first encountered in 1967. A year later, after the assassination of Martin Luther King Jr., Saar’s work took a turn toward race, gender and politics, incorporating images and icons of the Jim Crow era in pieces like The Liberation of Aunt Jemima, which armed a “mammy” doll with a gun.

Artwork by Saar is part of the permanent collection at museums including LACMA, MOCA, MoMA, the Hirshhorn, The Whitney Museum of American Art and numerous others. But with a gallery dedicated solely to her work in The Broad’s current exhibition, Soul of a Nation, focusing on African American art from 1960 through 1980, and a show at MoMA in October running simultaneously with another at LACMA this September, Saar is finally having an overdue moment in her home city and beyond.

“I don’t like to use the word overdue. I think it’s right on time,” artist and host committee member Bradford told The Hollywood Reporter as he arrived with his partner, Allan DiCastro. “She has been working for such a long time and she’s influenced so many artists. I studied her in school. I’d been to her exhibitions. Once I met her, I was influenced by her overwhelming personality, her generosity, her thoughtfulness.”

Artist Scharf echoed Bradford’s appreciation. “You don’t know why people are overlooked at certain times, and then they’re more relevant,” he said before the brunch. “That’s always a mystery why things are in and out, but it’s nice to see her getting the attention she deserves.”

A four-time Emmy nominee best known for playing LAPD Captain Claudette Wymson on The Shield and Coroner Loretta Wade on NCIS New Orleans, Pounder will next be seen on the big screen reprising her role as Mo’at, mother of Zoe Saldana’s Neytiri in James Cameron’s Avatar sequels. A longtime friend of Saar’s, Pounder recalled shared trips to Mexico City flea markets, the south of France, even to the gate of James Baldwin’s house in Venice, in search of items the artist might use in her work.

“She’s produced so many different things using so many mediums and has created a visceral response to the American dilemma that it’s amazing to me, in one sense, that she hasn’t been honored before in this kind of way,” said Pounder. “We talk about worth in terms of dollars and cents. And I think with Betye we have an opportunity to talk about worth in terms of love and reflection on the human condition.”

When Saar finally stepped to the dais, the room erupted with a standing ovation for the diminutive but charismatic figure in her trademark headscarf topped by a tuft of silver hair. “I’m so glad you’re all here to share this moment with me,” she said, still spry a month before her 93rd birthday. “I know that while you’re here, you’re also benefiting ICA because they’re like the art heart of Los Angeles and have helped a lot of people just by being here.” That was all she said, then thanked the guests and donated $1,000 to the museum.

As dessert was served, longtime ICA LA executive director Elsa Longhauser, who is soon stepping down, thanked the crowd. And President of the Board of Directors Laura Donnelley reminded them all to donate. But before that, Pounder wound up her tribute recalling a project Saar once mentioned called Fade. It included pictures against dead vines and corresponding funereal imagery to be exhibited after her passing, which, by the look of things, is a long way off. “I don’t know,” Saar told Pounder not long ago. “I don’t want to jinx it, but I think I might make it to 100!” 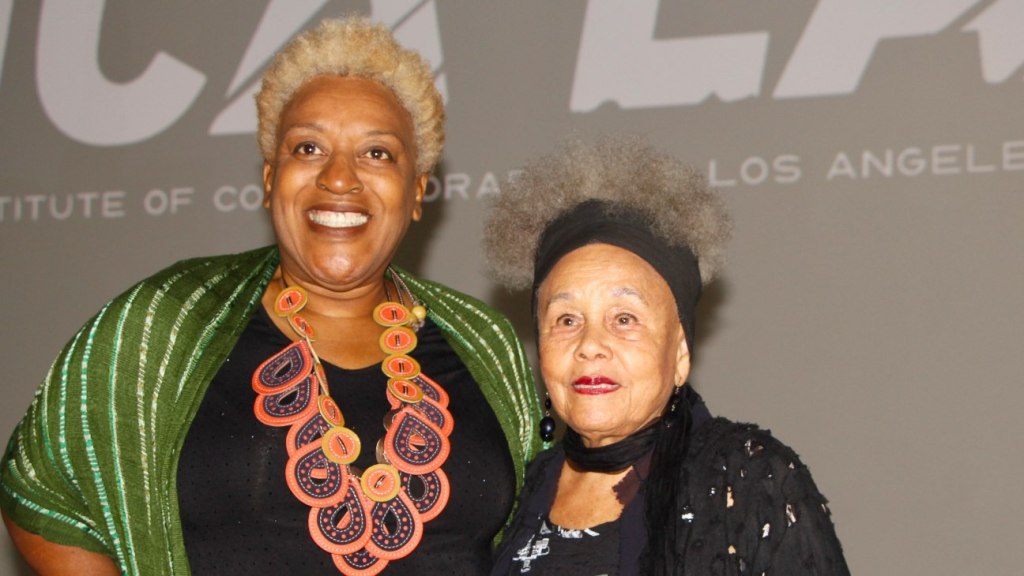