A flood of familiar faces filled the third floor at LACMA this week for the Los Angeles premiere of artist David Hockney’s latest works, 82 Portraits and 1 Still-life, opening Sunday and on view through July 29. Curator Stephanie Barron was seen chatting with Brad Pitt while Christopher Nolan and producer Emma Thomas conferred with an expert on art restoration. But Hollywood A-listers weren’t the only familiar faces because so many of the attendees had sat for the portraits they were there to view.

“I’d done 40 before I realized I could do a lot more. It was an amazing thing to do, 82 portraits, now that I think of it,” Hockney tells The Hollywood Reporter of the series, which was completed over three years beginning in 2013.

“One became two and the next thing we knew there were 82,” rhymes Goulds, accounting for the random number of portraits. A better answer is that’s how many paintings the galleries at the Royal Academy (where the show premiered last year), would accommodate.

The still-life was a stop-gap when one subject, Ayn Grinstein, daughter of Stanley Grinstein, director of artist’s workshop, Gemini G.E.L., had to reschedule around her father’s funeral. 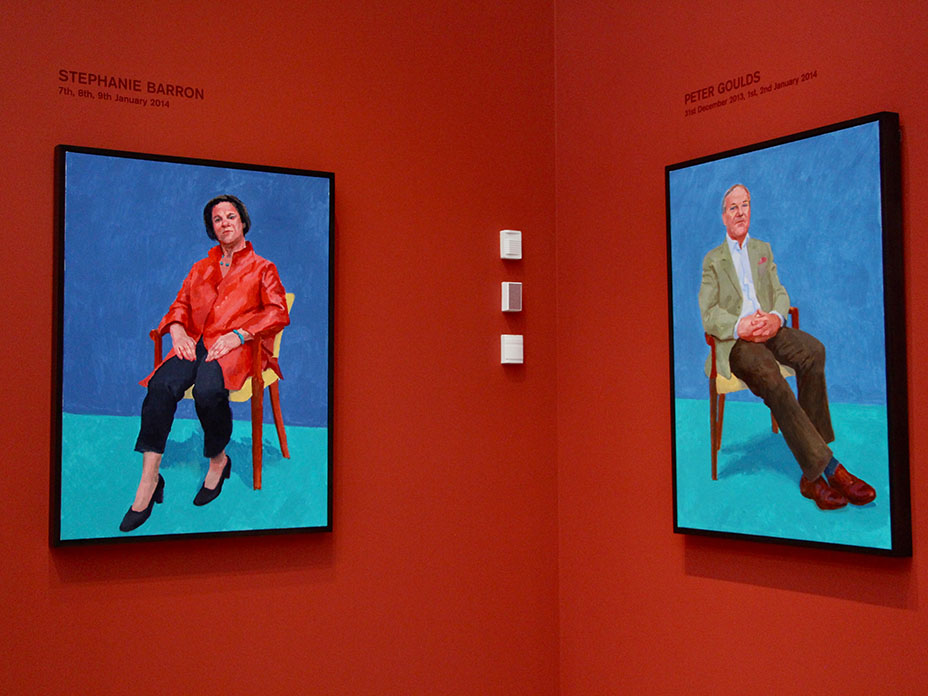 In 2013, Hockney returned to Los Angeles from Bridlington, East Yorkshire, where he had been painting landscapes, after his assistant, Dominic Elliott, died from drinking toxic drain cleaner following a night of partying. When the artist captured a likeness of his other assistant, J-P Goncalves De Lima, head in hands, mourning the loss, it became the first portrait in the series. “I didn’t set off saying ‘I’m going to do 82 portraits.’ You don’t do that,” he says, looking back. “They just grow.”

While the work provided some catharsis following the tragedy, Goulds says the switch from landscape to portrait is not uncommon for the artist. “When a particular subject, a landscape in this case, has dominated any period of the work, he usually turns to portraiture after that,” he explains.

It’s a genre Hockney has explored intermittently throughout his career, often employing a variety of media. “What do we really look like?” he asks. “I mean, do you know? Even photographs of them don’t look like people.”

With his compromised hearing, Hockney seldom goes to restaurants or parties anymore, but was happy to reunite with friends and acquaintances by painting them. “If you look at this group of people and you realize he had three days with each, that’s a very social experience, but it’s one-on-one in a way that is meaningful for David,” says Barron. “If these people were all in a room together, he couldn’t talk to them, he couldn’t hear them. But one on one you get three lunches, three days of him in his element. It’s a kind of wonderful gift both ways.”

Goulds has sat for Hockney numerous times through the years, but never for an extended period. “It is an unusual experience, to sit. It’s not a customary experience. He’s very direct,” Goulds recalls of the session. “I don’t think he sets out to flatter anyone. He paints what he sees. He sees, perhaps, from time to time, beneath the skin.”

Some of the faces, like Frank Gehry, John Baldessari and Barry Humphries (aka Dame Edna), are familiar to many, but the majority are not. “I painted most of the people who work for me. I painted my housekeeper. I painted anybody who would sit,” says Hockney with a laugh. “But the ones that I knew the least were the children of friends. But I knew their parents. I could see a bit of a likeness sometimes.” 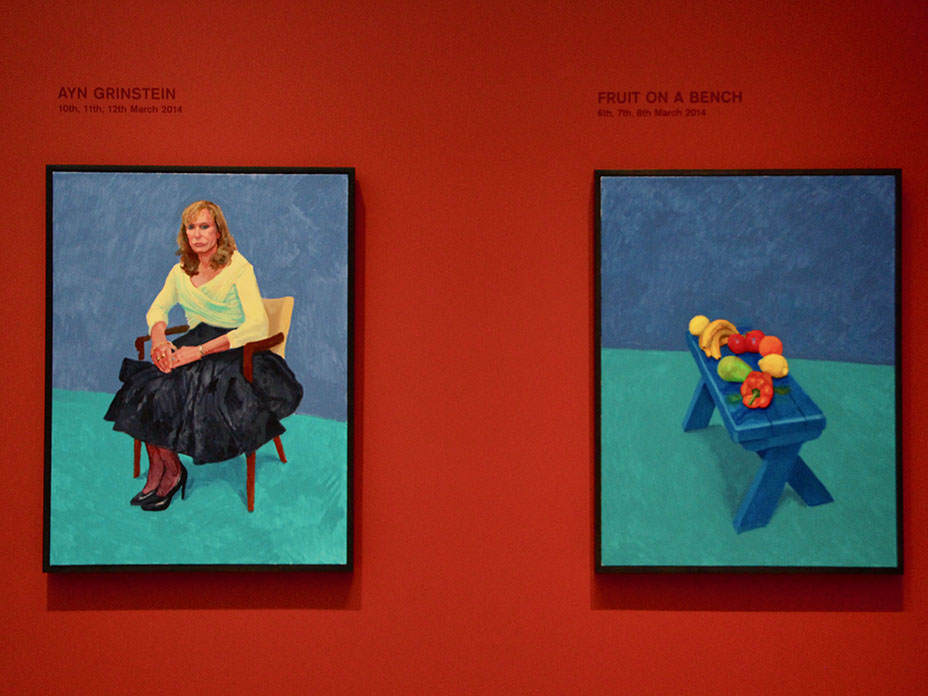 The likeness of 11-year-old Rufus Hale, son of artist Tacita Dean, who visited the studio to film the artist, is one of the few that addresses the viewer head-on, similar to a self-portrait Hockney made at the age of 17. “I think Rufus struck a chord,” observes Barron. “In the children there’s much less of a self-consciousness. And they probably had trouble keeping from squirming, but I don’t think that had to do with the psychological engagement of one adult scrutinizing another adult.”

Currently, Hockney is painting neither portraits nor landscapes, but is experimenting with perspective, shaping canvases for the first time by lopping off the lower corners. Despite his growing isolation, he remains engaged in the contemporary art scene, following current practitioners, trends and technology. “He’s breaking new ground,” says Goulds. “Here he is at 81, and actually more and more artists are paying attention to his work than ever.”