Many know actor Anthony Quinn for his indelible portrayals ranging from the title role in Zorba the Greek to his Oscar-winning takes on artist Paul Gauguin in Lust for Life and Mexican revolutionary Eufemio Zapata in Viva Zapata! What few know is that Quinn, who died in 2001, was a prolific sculptor and painter throughout his lifetime, selling a portrait to Douglas Fairbanks Sr. when he was just a teenager and later studying with legendary architect Frank Lloyd Wright. Even fewer are aware of the notion that Quinn was clairvoyant — at least according to his onetime art dealer, Glenn Harte, whose new book, The Prophetic Imagery of Anthony Quinn, elaborates on that startling claim.

“Tony Quinn never, ever spoke about ESP or fortune telling or future things. But he did talk about premonition and about ghosts and about having dreams and visions,” says Harte, who owns a gallery on Hawaii’s Maui. “In the science of precognition, it becomes apparent that the first people that are particularly prone to this are exactly like that. They speak about dreams, they speak about premonitions, but they don’t know how to define it. They don’t exactly know how to describe it. That seems to be what was going on with him.”

For Harte, it all began back in 2003, about a year and half after Quinn’s death. The gallery owner had been hired by the actor’s widow, Katherine Quinn, to help market his artworks, and was poring over items when he came upon a photograph of oil painting called Facets of Liberty — an image of what might be the head and face of the Statue of Liberty with another, shadier visage superimposed on the figure’s left. Harte concluded that the painting was inspired by the attack on the World Trade Center. The problem is that Quinn made it 16 years before 9/11, in 1985. For Harte there was only one explanation: precognition.

“It was quite a surprise to me, and I kept looking at it and looking at it and seeing more of the images of that day, which included the firemen, the smoke in the sky, the planes crashing into the tower and things like that,” Harte explains.

Count Katherine Quinn among the skeptics regarding Harte’s interpretation. “I took it as the two faces of liberty — the sadness and the beauty of it — and a very sad side to the promises America makes but doesn’t always come through,” she says.

Anthony Quinn came to the U.S. from Chihuahua, Mexico, in 1915 when he was only eight months old. As a young man, he worked odd jobs and was a professional boxer — and was confronted with a more virulent strain of anti-Mexican racism than that which persists today. While she hesitates to characterize it as precognition, Quinn recalls a conversation with her husband before he died, just three months prior to 9/11. “He said something awful is going to happen and nobody even understands on what scale it will be.”

Harte lists other examples of Quinn’s precognitive abilities, such as a painting of a boy from 1940 that looks a lot like the son the star had with Katherine in 1996. In another chapter we learn that such abilities are not uncommon among artists: Paul McCartney is reported to have awoken with the tune for “Yesterday” fully formed in his head, while James Cameron is said to have dreamed of robotic men as a teenager, years before he sat down to write The Terminator.

“If you have a dream and you write a book about the dream and it becomes a success, did you write down the content of the dream, or did you have a precognitive vision about a movie that was going to be a success?” asks Harte, without a hint of irony. “You can interpret it either way.”

Harte sees Quinn as one of the century’s greatest artists, and he views Facets of Liberty as one of the most important paintings of the past hundred years, which is why he had to see it in person. Research led him to a bank that was being liquidated, where Quinn’s painting had been hanging in the boardroom. Harte purchased it sight unseen for an undisclosed sum, with no authenticating documents. And while he believes it is a piece worth multimillions, so far the highest price he has seen for a work by Quinn is $500,000.

“It’s authentic. Katherine has seen it. The people who were present when he painted it have just seen it recently,” he assures THR. And lest his new book be deemed merely a marketing tool for the painting, Harte insists the work is not for sale. “I fully intend to keep it. I’m fascinated by the whole subject matter.” 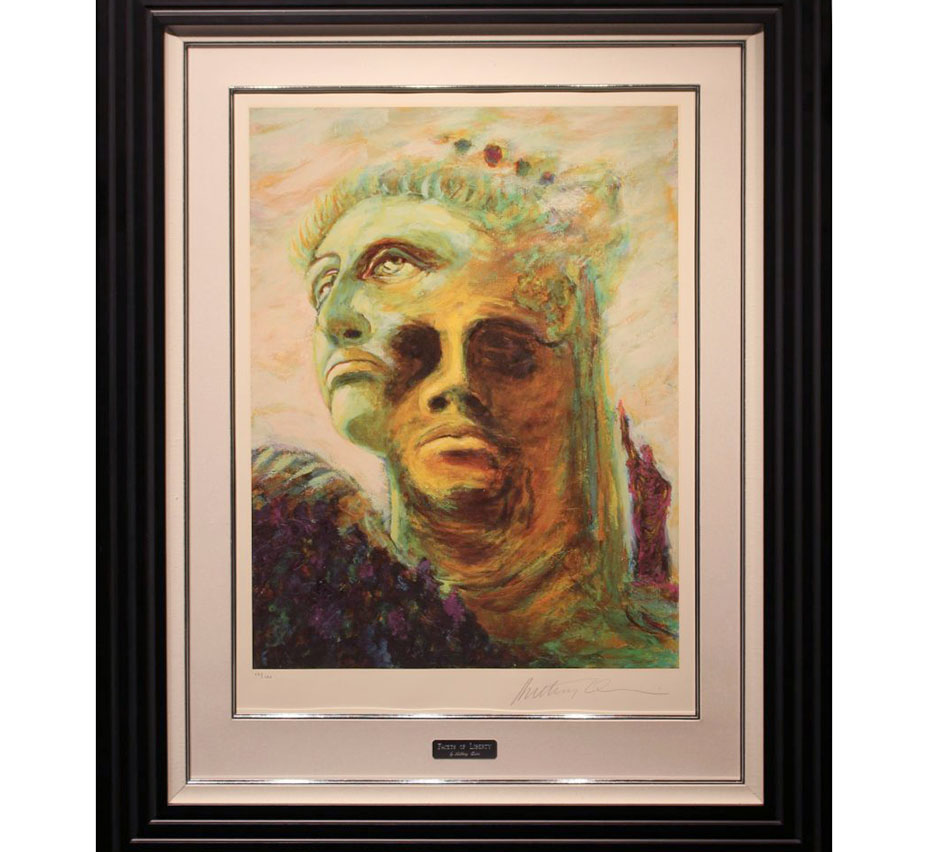