Mickey Mouse is one of the most recognizable entertainment characters in the world, at least in appearance — his rounded ears, white gloves, red pants and omnipresent smile are the stuff of Disney legend. But can he be identified via sounds and words? That’s the challenge that artist Brian Roettinger is leaving viewers of Mickey: The True Original Exhibition, which is celebrating the icon’s 90th birthday in the Chelsea neighborhood of New York next month (Nov. 8 through Feb. 10, 2019). For the installation, Roettinger created a comic-book inspired “sound piece” that primarily evokes Mickey through sound and dialogue bubbles.

Roettinger is an eclectic choice for the exhibit; the Los Angeles-based artist is best known for designing iconic album covers for Jay-Z (4:44), Kesha (Rainbow), Childish Gambino (Because the Internet) and Florence and the Machine (How Big, How Blue, How Beautiful), not animation or Hollywood work. But The True Original has reached primarily into the contemporary art world for its pieces, and on Tuesday the exhibit announced that Roettinger and Shinique Smith (who created a sculpture composed of Mickey plush and textile), among others, will join previously announced contributors Amanda Ross-Ho (an oversized Mickey ringer tee), Kenny Scharf (a blacklit “Cosmic Cavern” with Mickey iconography).

On Tuesday night, Smith’s work, “Bale Variant No.0026,” will be unveiled from 7-10 p.m. at DTLA Lupetti Pizzeria. Ahead of that reveal, Roettinger talked to The Hollywood Reporter about his relationship to Mickey Mouse, his onomatopoetic piece and digging into the Disney archives. 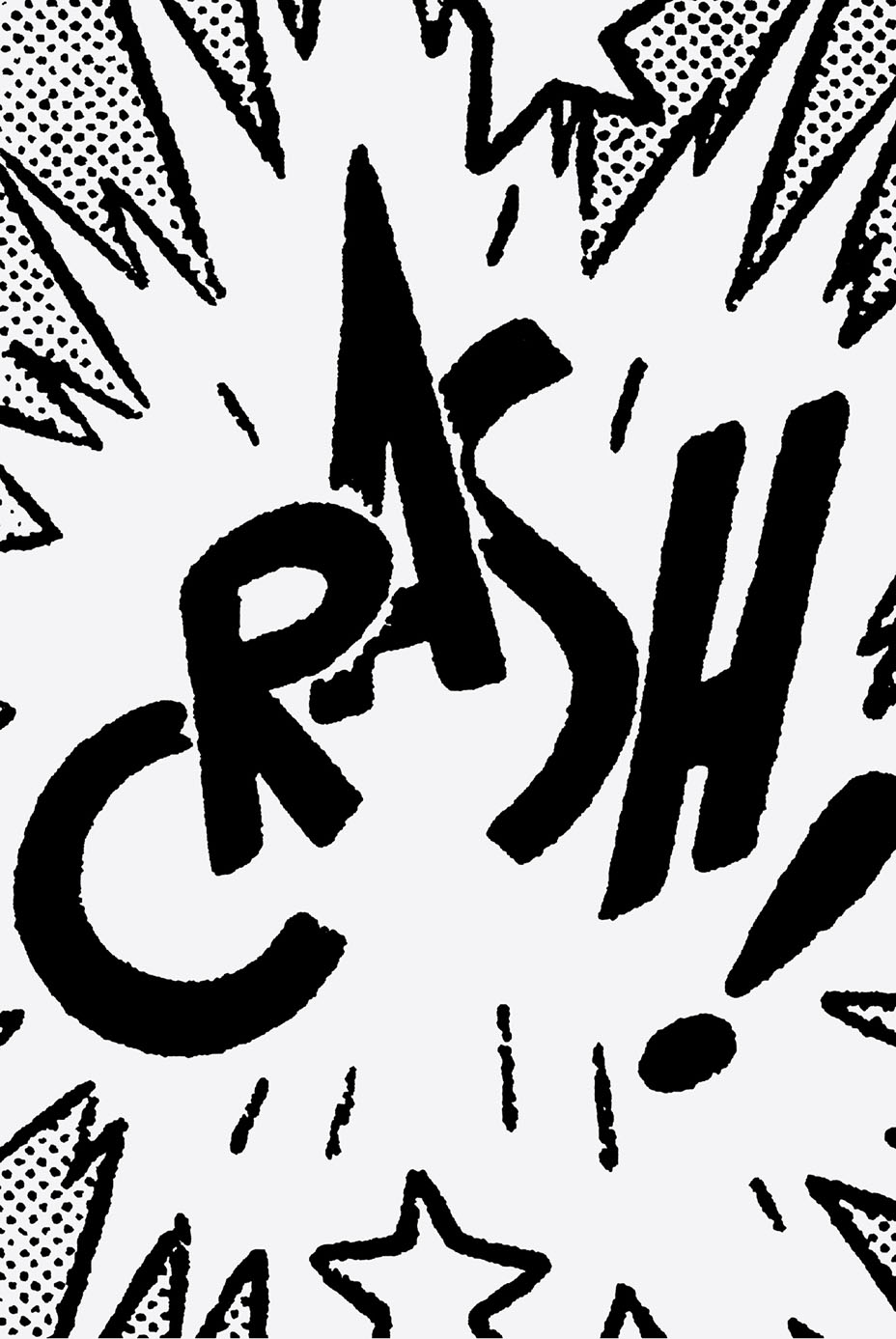 How did you get involved with this exhibition?

I’ve worked with Darren Romanelli, who’s the curator of the entire project, on a few other things, so he brought me on board. He asked if I was interested in being a contributing artist, and of course I was — that was where the discussion started.

Growing up in Southern California, Disneyland becomes part of the cultural landscape, especially if you’re a kid. The first introduction I remember, maybe even before the Mickey tee shirt, was Disneyland as an experience and going at maybe around 7 or 8 years old. Growing up later, and realizing how Mickey extends beyond Los Angeles and Disneyland, that it is this massive, iconic, and one of the most recognizable figures in the world, you understand his scale and his reach. I was always interested in that, his global character. He’s this character, but he’s more of an iconography — he’s almost like a logo. As I was becoming a designer, I started to realize that even more.

Tell me a little bit about what inspired the piece, and why you chose to make it in a comic-book style.

I knew I wanted to make something that was going to be really bold and graphic and also looked back to the origins of Mickey in the format of the comic — the pre-moving-image Mickey. The starting point was that I definitely wanted to work in black and white as my color palette. And when I visited [Disney’s publications] archive and looked at the really early comic strips, the expression that happened within those strips used only subtle gestures, lines, speech bubbles and clouds of smoke. Going beyond that, the comic strip is devoid of any sound: It always uses words to emulate either a really loud expression or a really loud or quiet sound. For me, as I was reading and looking at these comics, they almost were sound pieces. As I read them, I started to hear them moreso.

I wanted this to be about how these are sound pieces, but I also wanted to remove this being an exhibition about Mickey. I wanted to say as much as I could about Mickey without showing Mickey in a literal way — I wanted it to be about him but not exclusively just showing him. So by using words and sounds it was like, OK, this is about not just about Mickey, this is about the sound of Mickey. This is a very graphic piece, but as you read it, my hope is that people start to [realize] it is a sound piece with no sound. Because as you walk through and you read these words over and over, you start to hear them. 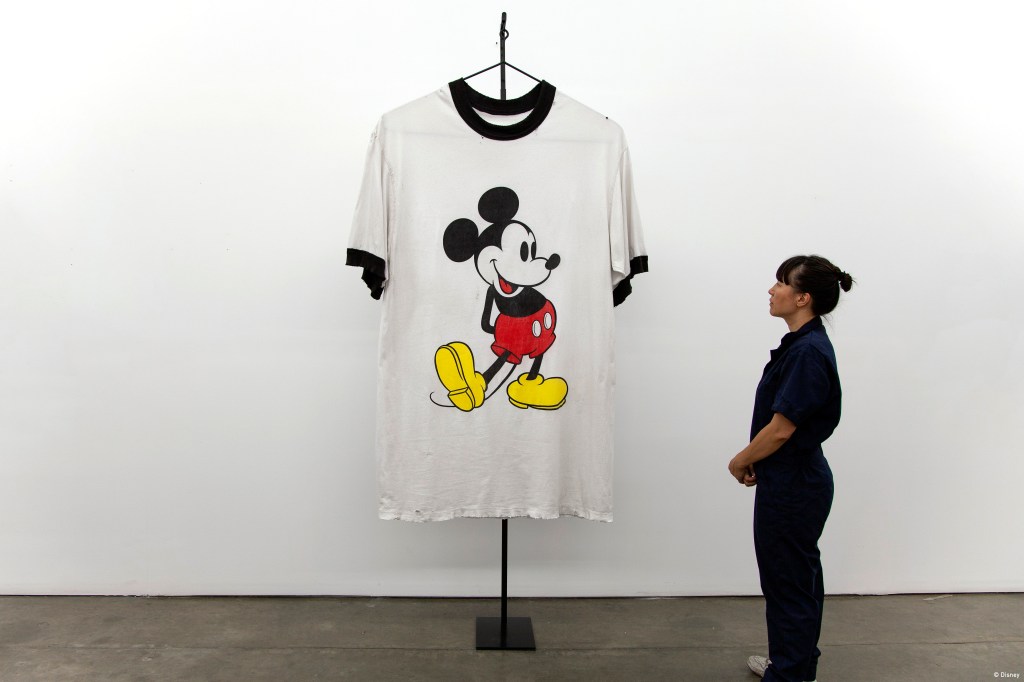 What was it like to handle the original versions of the character?

The archive had a lot of the original pen-and-ink comic strips that I referenced and looked at. And they’re immaculate: The line quality is impeccable, the black in the ink is still super rich and black. These things are from 1928, 1929, 1932, and the contrast of the ink and paper was, to me, someone who works in a lot of print media, so luscious and so satisfying that I wanted to be able to capture that contrast and that image quality.

You’re perhaps best known for creating work for contemporary artists like Jay-Z, Kesha and Childish Gambino — how does this piece connect to your previous work?

Whatever the medium is, or whatever the outcome, it’s always rooted in a concept or an idea — a highly conceptual idea, a color palette, a mood, feeling or sound. For this, it was really no different. It was really about understanding not just what I want to do, but who Mickey was, especially in those early comic strips. After scouring through them, reading them and looking at them, you understand him as a character, and so I felt this was a good way of representing him.

So it’s really about research and then understanding how you could communicate ideas in an interesting way.

What impression do you want to give the viewer with this?

I hope it gives them a completely different perspective on Mickey as a character, and also a completely different perspective on storytelling in the hope that they can go back and look at those old comics and maybe actually want to read them. And, especially for the whole generation where everyone grew up with Mickey as a moving character in color, also understand that this was the origins of Mickey, this comic strip. 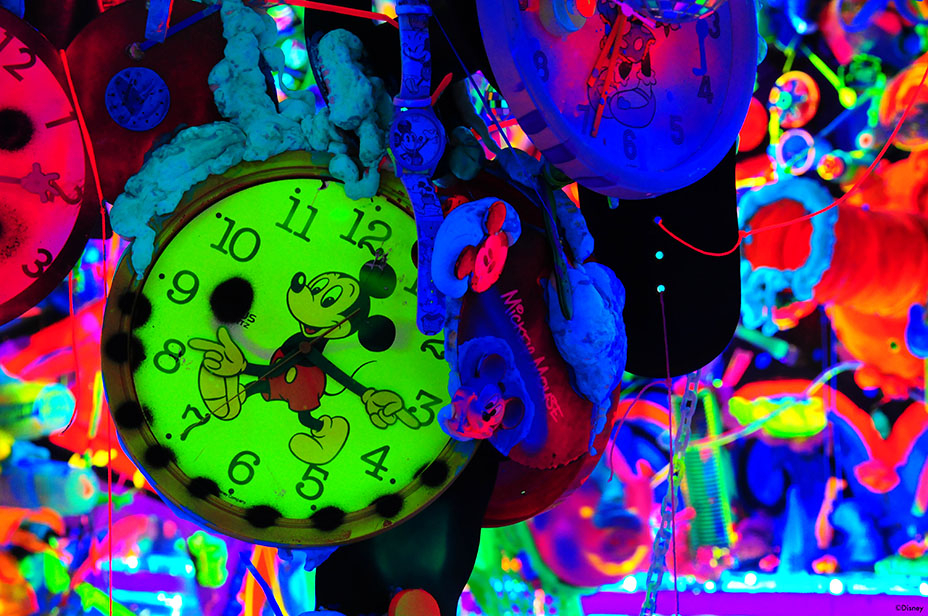 Have you seen the other artists’ work in the Mickey Mouse series?

I haven’t seen any of the work that they’re making for the exhibition, but I’m familiar with some of the artists, so I’m looking forward to seeing what they make. I like to be kept in the dark, so when you see the exhibition in context, it’s the first time you’re seeing everything as it’s meant to be seen, instead of potentially an image on a computer.

Mickey Mouse hasn’t been a character in a major cultural work for quite some time: In your view, why does the character stick around in the cultural imagination?

That’s a good question. I think he’s this inspirational, fun character and he’s also an extremely global, recognizable character. And people like to even use him in a subversive way or in a non-subversive way. He definitely has a personality and a connotation and is recognizable; everyone can relate to him, in a way, and being almost 90, he’s been around forever. Especially in art and in pop, they’re using cultural figures to represent ideas. I think of pop and cultural iconography and figures as always being appropriated, borrowed or stolen or hijacked in some way for years. He’s just one of those characters.