Along with its ravishing score, the original 1947 Broadway production of Brigadoon cemented its place in Golden Age history via the vigorously expressive choreography of Agnes de Mille, combining Scottish folk reels, traditional sword dances, musical-theater moves and emotionally charged ballet. The first breakout hit for writer-lyricist Alan Jay Lerner and composer Frederick Loewe — a team whose sophisticated craftsmanship went on to yield even greater successes with My Fair Lady and Camelot — this lush romantic fantasy followed the Rodgers and Hammerstein lead in stitching song, dramatic scenes and dance into a fully integrated narrative canvas. So who better to revisit this swooning warhorse than director-choreographer Christopher Wheeldon?

Leslie Odom Jr. Returns to Broadway in Revival of 'Purlie Victorious: A Non-Confederate Romp Through the Cotton Patch'

The limitations of the old-fashioned material cannot be disguised — with its determined postwar optimism, its thin folktale of a plot built around an enchanted village, its abundance of quaint Scots stereotypes and its breathlessly contrived happy ending. But there’s nonetheless plenty to savor in New York City Center’s sumptuous annual gala presentation, which runs for just seven performances.

High among the production’s strengths is the breathtaking vocal performance of Kelli O’Hara, who seems merely to open her mouth and out pour crystalline notes of the rarest luster, warmth and dramatic integrity. Starring opposite her is Patrick Wilson, an ideal romantic lead too long absent from New York stages, his assured singing untarnished by his years away from musical theater. Then there are flavorfully contrasted comedic turns from Aasif Mandvi, in the non-singing role of a jaded 20th-century New Yorker; and Stephanie J. Block as a frisky 18th-century dairymaid, whose seduction tactics would now get her marched straight to HR for a stern talk about sexual harassment. 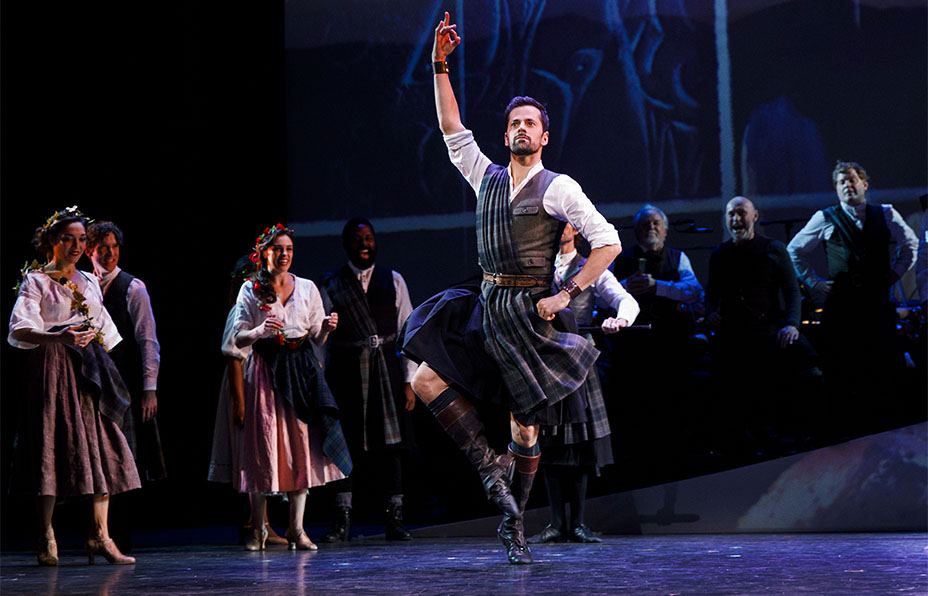 Perhaps the most thrilling highlight is the impassioned dancing of Robert Fairchild, who navigated an impressive crossover from ballet into musical theater in Wheeldon’s Broadway production of An American in Paris. If Brigadoon exults in the transformative magic of love, it also provides a somber commentary on the bitterness and pain of love denied, through Fairchild’s heartbroken character Harry Beaton. Brooding anger and longing course through his muscular dance solos in a riveting performance that should generate a spike in kilt sales. It will also cause feelings of extreme inadequacy in any man who’s been neglecting his quads at the gym.

Wilson and Mandvi play Tommy Albright and Jeff Douglas, American friends on a game-shooting trip to the Scottish Highlands, organized in part so that Tommy can keep procrastinating about setting a wedding date with his fiancee Jane (Madison Stratton), a brittle New York society type. Wandering into a misty glen they can’t find on the map, Tommy observes that he feels as if he’s in a cathedral. Right on cue, celestial voices cut through the fog and a village materializes out of nowhere, bustling with locals on market day, singing “Down on MacConnachy Square.”

Fiona MacLaren (O’Hara) helps prepare for the wedding that evening of her younger sister Jean (Sara Esty) to Charlie Dalrymple (Ross Lekites), while Jean’s rejected former beau Harry (Fairchild) skulks about, simmering with resentment. In the gorgeous “Waitin‘ for My Dearie,” Fiona reveals that she believes in love but is in no rush to settle for just anyone, while reformed womanizer Charlie declares, “I’ll Go Home With Bonnie Jean,” launching into a rowdy dance with the townsfolk.

Tommy and Jeff initially chalk up all the tartan and peasant garb to a village-fair tradition, taking it in just like regular tourists. Jeff gets whisked off for some personal hospitality from milkmaid Meg (Block), who remains single, not for lack of trying, as she outlines in “The Love of My Life,” a droll song with lyrics that show Lerner in particularly witty form. Meanwhile, Tommy is invited to the MacLaren home, sparking a thorny connection with Fiona, which mellows in an airy duet as they gather “Heather on the Hill.” The voices of O’Hara and Wilson blend beautifully here. Likewise soon after on the musical’s best known song, “Almost Like Being in Love,” and later in the show on the ruefully tender “From This Day On.”

As rousing as they are, the numerous dance interludes do tend to slow down the story, pointing up its relative flimsiness and minimizing character development in all but Harry’s case. But there’s a lovely yearning quality to a dance led by Esty (another alum of An American in Paris), featuring the village women, as Charlie pines for his bride in “Come to Me, Bend to Me.” And the sword dance at their wedding, with Fairchild leading the various clansmen with ferocious energy and precision, elevates the stakes in dramatic fashion right before intermission. 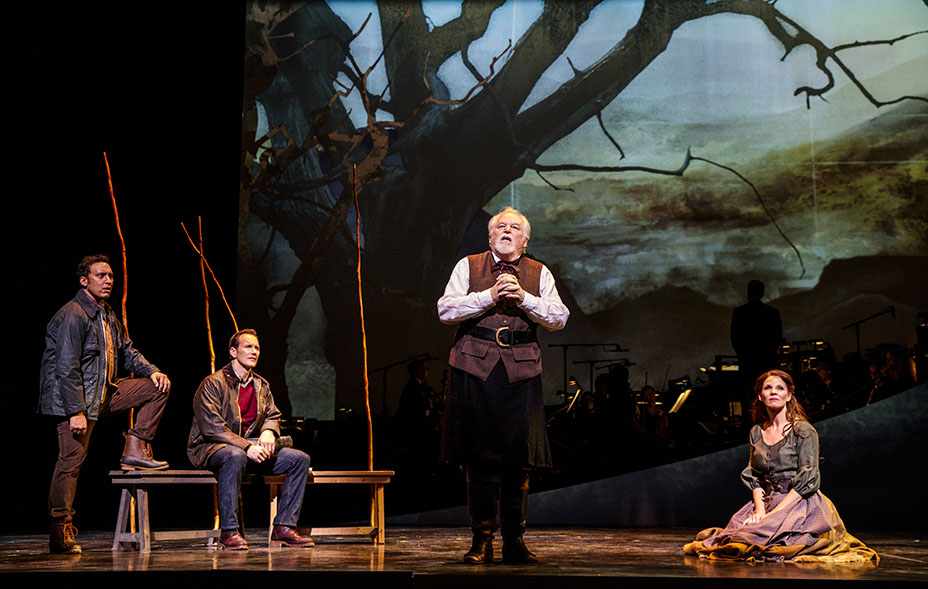 Fiona eventually enlists schoolmaster Mr. Lundie (Dakin Matthews, bringing his customary twinkly-eyed authority) to recount the strange history of the village lost in time to the wide-eyed Americans. In this version, the “miracle” was the result of a prayer from the local clergyman to spare Brigadoon from the ravages of witchcraft plaguing the land. It resulted in an entire town that wakes from sleep just once every hundred years. Should any villager ever leave, as Harry threatens to, the town will vanish into the mist forever. But the spell allows for an outsider to stay if compelled by true love, which creates a massive dilemma for Tommy.

Brigadoon is very much a show of its time, making it hard to imagine a commercial production having much traction on Broadway these days, especially without some fixes to the choppy second act. But aside from using projected backdrops that occasionally look like greeting-card art, Wheeldon has done as persuasive a job as possible, taking his cue from de Mille’s original dances to enhance the show’s emotional richness through spirited movement. That applies uppermost to Fairchild’s commanding turn, but also to the wrenching drama of Patricia Delgado’s “Funeral Dance,” heralded by the melancholy notes of bagpipes cutting through the wedding festivities. The wounded force unleashed by her character’s unrequited love for Harry carries a humbling weight for the onlookers.

Under the baton of music director Rob Berman, the full orchestra brings glorious life to Loewe’s score. O’Hara’s silken pipes were made for music like this, but the show is impeccably sung by the entire large ensemble. Whatever the flaws in the material, this entertaining production is a vastly superior interpretation that erases any blah memories of the lifeless 1954 Vincente Minnelli film.