The rain didn’t dampen the Kids Art Museum Project, the Hammer Museum’s hottest art party for kids. It enhanced it, providing another source of entertainment for the families totaling 1,200 that attended the annual event on Sunday.

“The event has grown from me putting a bunch of supplies in a single box and carrying them to a table to a team who give so much of their time, emotional heart and creativity,” K.A.M.P founder and co-chair Brooke Kanter told The Hollywood Reporter. This year she is co-chairing with Sarah McHale.

Kanter, the wife of Paradigm head of motion picture literary Adam Kanter, said she started the event to instill a love for supporting art institutions from a young age while also exposing children to the different creative paths life offers.

Families enjoyed art projects while snacking on sweets provided by Milk Bar and Tender Greens. The event’s funding supports the Hammer Museum’s year around efforts to provide free programming to families in the L.A. area. Over the last 10 years, K.A.M.P. raised over $1 million, Kanter said. The event is important to her because as her daughter Hannah Kanter told THR, her mom is “an art enthusiast.”

“You walk into her house and there are paintings covering every wall,” Hannah said. “This event is something really special to our family because my mom works really hard to perfect this every year.”

Brooke has brought her daughter to K.A.M.P ever since it started. As a result, Hannah said, she has been a part of every stage, from participating in the artist projects to becoming a K.A.M.P volunteer to being a bystander amazed at how art can “inspire a younger generation.” For her, K.A.M.P has transformed her into a museum lover just like her mom.

This year’s K.A.M.P inspired the next generation with story telling by actors Ki Hong Lee, Elizabeth Chambers Hammer, Joe Manganiello, Sofía Vergara and John Stamos. The celebrity readings, conducted by above the line and below the line stars, as well as actors “expose kids to artists of all kinds,” Brooke noted. Instead of clay and paint, actors like John Stamos use their voices and facial expressions to engage kids.

“Every four years, a Full House fan is born,” Stamos jokingly told THR. As for Stamos’ reading? The Tiffany & Co. decorated reading room exploded with excitement as soon as he entered. He read his friend Jamie Lee Curtis’ book I’m Gonna Like Me, stopping between page turns to ask kids questions. Stamos said this book was important because “we live in a day and age where people are mean” to each other just because of differences.

“This [book] is about liking who you are and being proud of who you are,” Stamos told THR.

Lee also wanted to showcase a book that made him proud of his identity. He read Eva Chan’s Juno Valentine and the Magical Shoes to children seated on pillows before him. Lee said he liked the book because it showcased an Asian character while highlighting “important women in history.”

“Seeing someone on the books that looks like you … that’s important because if you’re constantly inundated with [characters] that don’t look like you, you’re always going to feel like the other,” Lee told THR. “What’s important now is diversity and making sure everyone feels like they belong.” 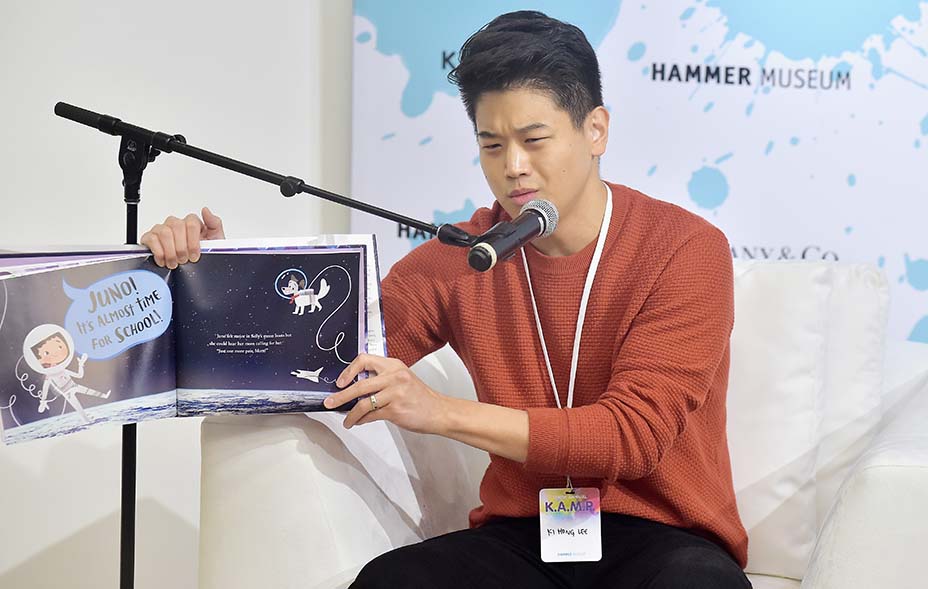