After nearly a month of student protests that exposed racial divisions on campus, the faculty of Chapman University’s film school has decided to remove two original posters promoting D.W. Griffith’s 1915 epic The Birth of a Nation from the first floor of the school’s production building in Orange, California.

The decision was announced in an email from Dodge College of Film and Media Arts dean Prof. Robert Bassett on Monday afternoon. “By vote of the faculty today Dodge College will be removing the two posters related to The Birth of a Nation (1915) and returning them to the donor,” Bassett wrote. “However, the faculty will continue to screen the film in appropriate classes, as well as explore ways outside of class to discuss race and other related issues.”

A little over a half hour after the announcement, student organizers witnessed the posters being taken down from their previous perch on the first floor of the Marion Knott Studios, a 76,000-square-foot replica of a film studio where students have access to a Foley stage, 36 editing suites and a theater that seats 500, among other resources. The posters were hung in a high foot-traffic area, students say, near soundstages across from the Foley stage.

“I’m very pleased. I’m super happy that the faculty finally got their say and they made what I think is the right choice,” said first-year film production graduate student Arri Caviness, one of the student leaders advocating for the posters’ removal.

Added Amanda Dyer, a first-year producing graduate student and student leader: “This was unfortunately a controversial issue that should have been much simpler, but we’re glad that people came to their senses.” 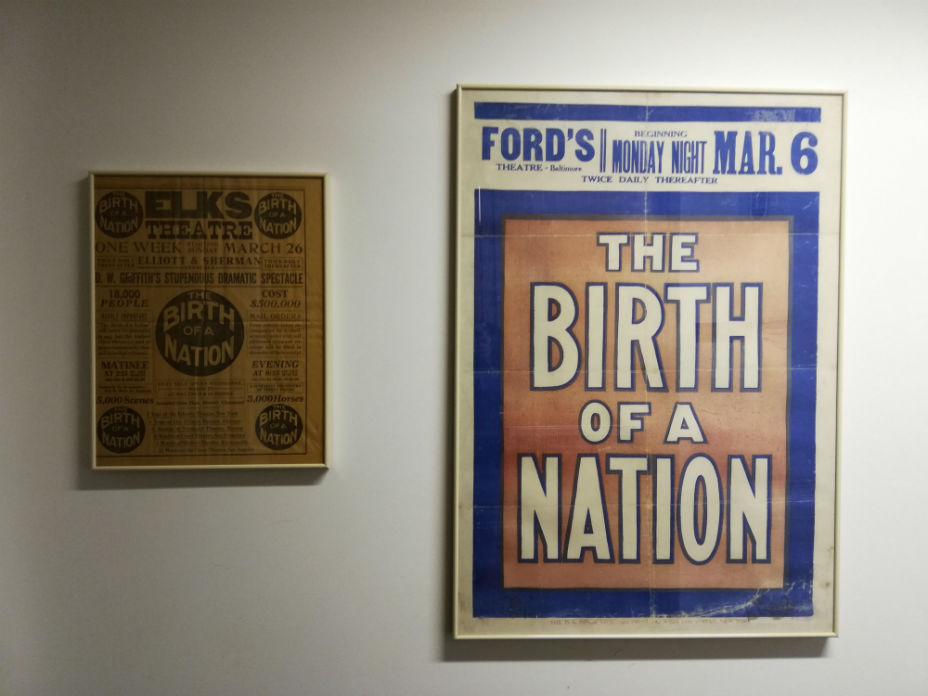 Donated by Chapman trustee and Cecil B. DeMille’s granddaughter Cecilia DeMille Presley as part of a large gift of movie art and posters to the university — which was named to The Hollywood Reporter‘s top film schools list in 2018 and has produced alumni including Dear White People writer-director Justin Simien and Stranger Things co-creators Matt and Ross Duffer — the Birth of a Nation posters included a red, white and blue-colored promotion of the movie for Ford’s Theatre and a newspaper ad from Elks Theatre that touts the film as “D.W. Griffith’s Stupendous Dramatic Spectacle.”

In a statement to THR about the Dodge College faculty’s decision, Cecilia DeMille Presley said that of the 85 original posters and art  that she donated, “if one of them offends the students, I believe that the board of Chapman will do what is best for their students.” She added, “I do want the students to know, that we all know Griffith was a racist. His films showed this. He gave many gifts to the art of cinema, but as a family in the film world, we were appalled by his racism. The American audience left him because of this. He died in a hotel lobby almost completely broke. What the students are protesting now, is what Americans were protesting all those years ago. Like the wise man said, ‘If you don’t know history you are bound to repeat it.’ “

The silent, black-and-white Birth of a Nation, which follows the fates of one abolitionist and one slave-owning family throughout the Civil War and Reconstruction period, is considered by some to be Hollywood’s first-ever blockbuster. The film, an adaptation of Thomas Dixon Jr.’s book The Clansman, is also a blatantly racist work that demonizes its black characters and portrays the Klu Klux Klan as heroes. Scholars have argued the pic’s success helped relaunch the KKK, which was on the outs in the early 20th century before the film romanticized the hate group and led to an uptick in KKK-branded products (the group subsequently used Griffith’s work as a recruiting tool).

A student had started an online petition in 2017 to remove the posters, but the debate exploded after Caviness tweeted a picture of several students of color in front of the posters on March 29. “Why does Dodge College, @THR’s 6th best US film school, still condone the celebration of white supremacy? #takedownBOAN,” she wrote.

The tweet was quickly picked up by BlacKkKlansman co-writer and producer Charlie Wachtel, who admitted to seeing the posters while on campus for a Q&A for the film and feeling “a little uncomfortable” about them in a tweet. Two student groups, one composed of graduate students and another of undergraduates, subsequently began requesting meetings with faculty and members of the school administration, as well as organizing community forums and a protest.

The college itself was initially slow to respond to Caviness’ original message, with its Twitter handle replying four days later to say faculty was involved in discussions over the posters. A week after that, Chapman University president Daniel Struppa addressed the issue by penning an opinion piece for the school’s newspaper explaining why he would leave the decision to keep or remove the promotions to Dodge College faculty.

Students secured a promise for a faculty vote at an emotional three-hour, late-night meeting between the school’s Black Student Union and Struppa. According to BSU president Naidine Conde, who gave an interview to school paper The Panther afterwards, “There were a lot of tears, a lot of shocked faces, a lot of hurt confusion” at the meeting. White students account for 44 percent of Chapman’s graduate and Ph.D. students, according to fall 2018 enrollment numbers, while black students comprise 2.9 percent, Asian students 12.1 percent and Latino students 17.2 percent.

“When we went to the meeting with the Black Student Union, and hearing the testimonials from the students about, one, what it’s just like to be black at Chapman, and then specifically in the context of these posters … a lot of this wasn’t just about the posters, it was about power and about communities. There were other issues at play, I think,” said another student organizer, second-year film production graduate student Kashif Alvi.

The vote wasn’t officially scheduled until late last week, after a 60-person community meeting about the posters was held Wednesday, followed by a protest on Thursday. At least 150 students marched from the school’s auditorium to the film school hallway where the posters are exhibited, chanting “Take it down!,” then continued to faculty offices to ask the film teachers to “Listen to students” and “Vote now, listen now.” The decision to hold the faculty vote was announced not long after; the vote was conducted online.

“I am pleased to have had an opportunity to hear the faculty position. I am happy to endorse their resolution,” Struppa said in a statement to THR. “I hope the students will be pleased and will appreciate the fact that the removal of the poster was not imposed by me as president, as an act of authority, but rather agreed by the same faculty that they meet and work with every day. On the basis of the many conversations I had with faculty I know that their decision is predicated on their love for their students and their desire to eliminate anything that could be an obstacle to their learning.”

In addition to the several hundred-piece movie art and poster collection, the Cecil B. DeMille foundation in 1997 donated $500,000 to the film and television school at the behest of Cecilia and DeMille grandson Joseph Harper, at the time the single largest endowment the film school had received.